Accessibility links
More Than 50 Injured In Virginia Interstate Pileup Involving Nearly 70 Vehicles Virginia State Police said the crashes began on an icy and fog-shrouded overpass bridge around 7:51 a.m. Sunday. Authorities say no deaths were reported as a result of the massive pileup. 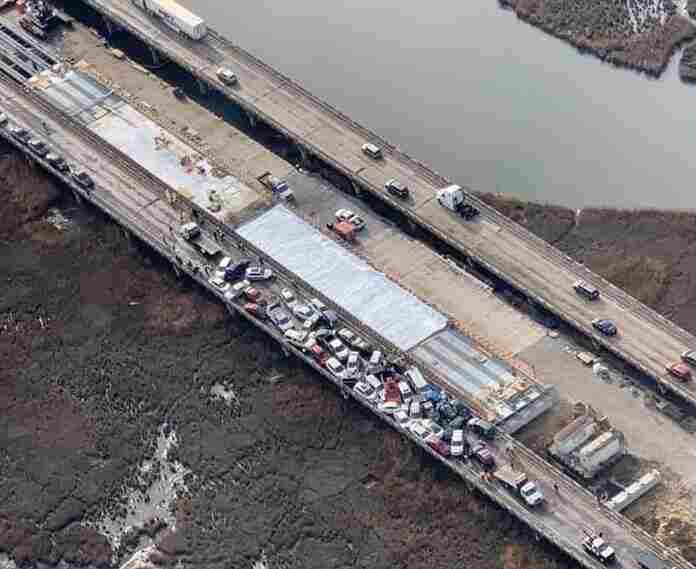 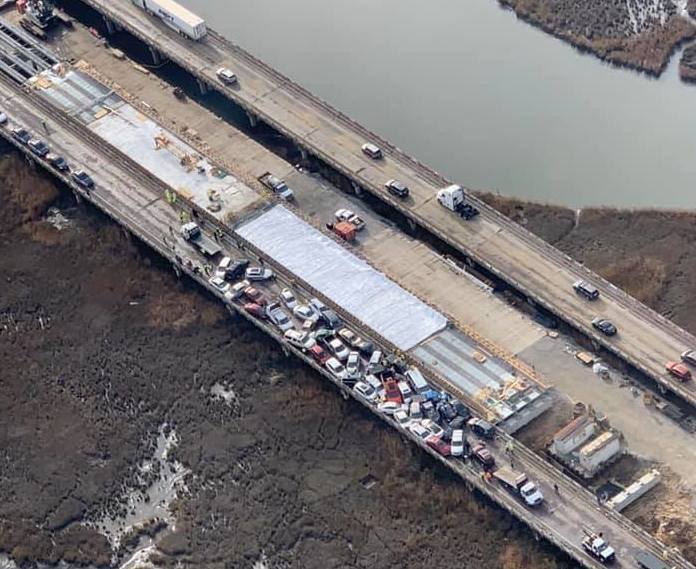 An aerial view of the pileup along Interstate 64 in Virginia, which authorities say involved nearly 70 vehicles.

More than 50 people were hospitalized after 69 cars were involved in a chain-reaction crash on a Virginia interstate on Sunday morning, state authorities say.

Images from Interstate 64 in York County near Williamsburg showed cars and trucks in a tangled heap following the pileup.

Virginia State Police said the crashes began on an icy and fog-shrouded overpass bridge around 7:51 a.m.

"Fog and ice were causative factors, but the cause of the actual accident, we do not know at this time," said Virginia State Police spokeswoman Sgt. Michelle Anaya.

The crash took place in the westbound lanes, but drivers in the eastbound lanes who were distracted by gawking at the vehicle smashup themselves got into accidents as well, police said.

As a result, traffic was shut down in both directions as rescue workers recovered the injured and cleared the scene. Lanes on the westbound side of the interstate where the crash occurred reopened roughly seven hours after the pileup. The eastbound side was closed for about three hours.

Local hospitals treated 51 patients as a result of the pileup, but nobody sustained life-threatening injuries, Anaya said.

Authorities have not reported any deaths.

I-64 accident this morning pic.twitter.com/xD1DjLMY1k

Shaun Stewart, the owner of the Williamsburg Flight Center, flew a plane over the wreckage Sunday morning.

He said the fog was so thick that he had to wait more than an hour after the accident before it was clear enough to take off.

"It was a bit shocking to see how they were all so tightly packed together," Stewart said. "I have to imagine it was because of the heavy fog that was wafting all around this morning." 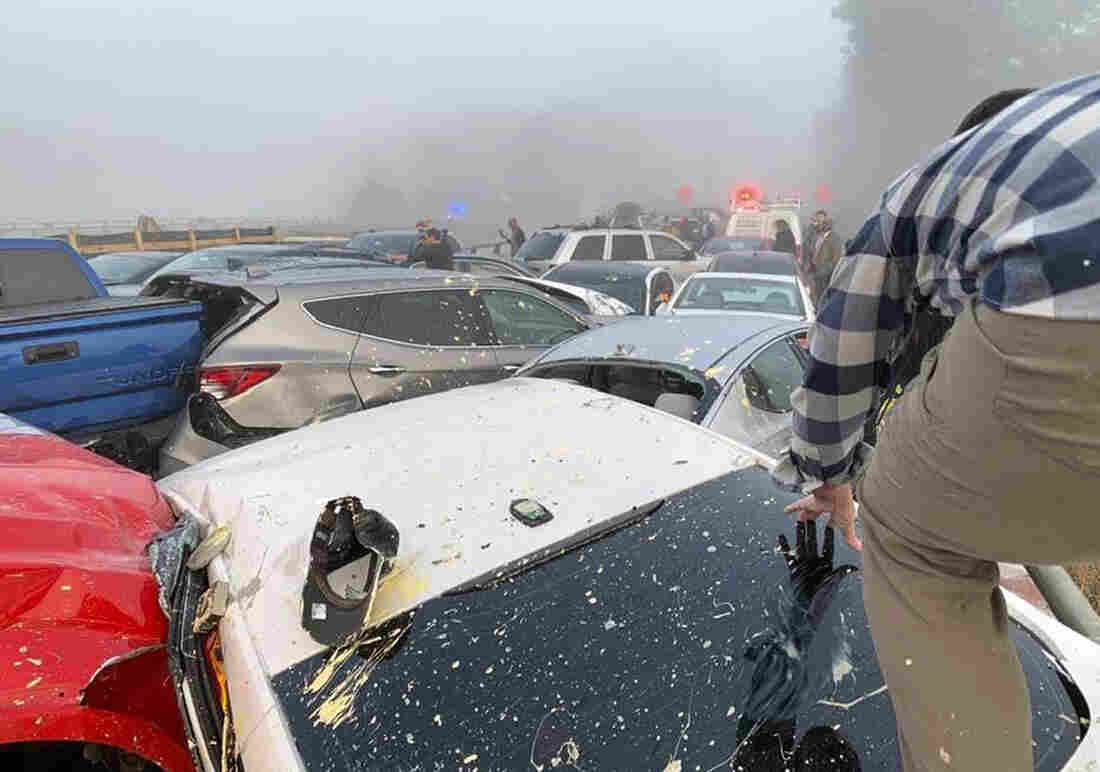 A person climbs over cars at the scene of a multivehicle pileup on Interstate 64 in York County, Va. on Sunday. Ivan Levy via AP hide caption 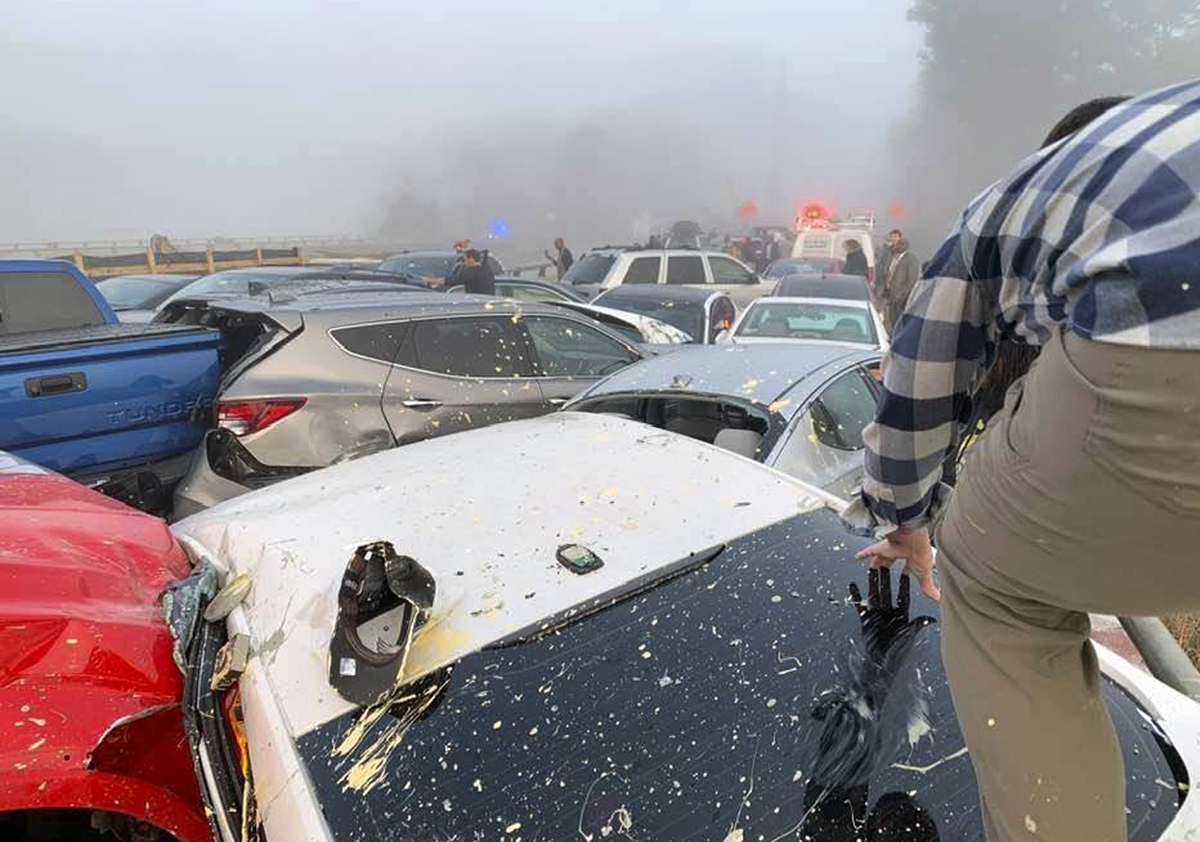 A person climbs over cars at the scene of a multivehicle pileup on Interstate 64 in York County, Va. on Sunday.

The National Weather Service reports that dense fog had reduced visibility to a quarter mile or less just before the incident.

Anaya said the investigation into the crash is ongoing. State officials are asking motorists to avoid the area.