Accessibility links
Boeing Announces Leadership Changes, CEO Dennis Muilenburg To Step Down Boeing statement: "The Board of Directors decided that a change in leadership was necessary to restore confidence in the Company." More than 300 people have died in Boeing 737 Max plane crashes. 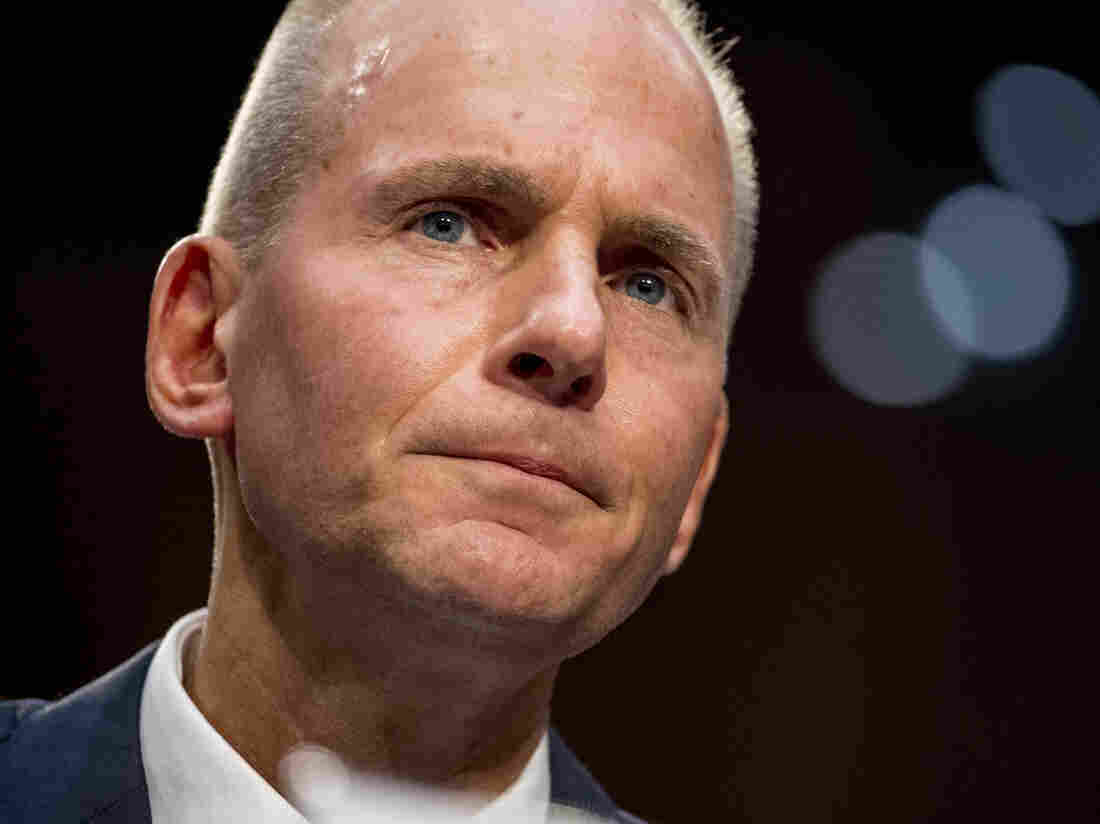 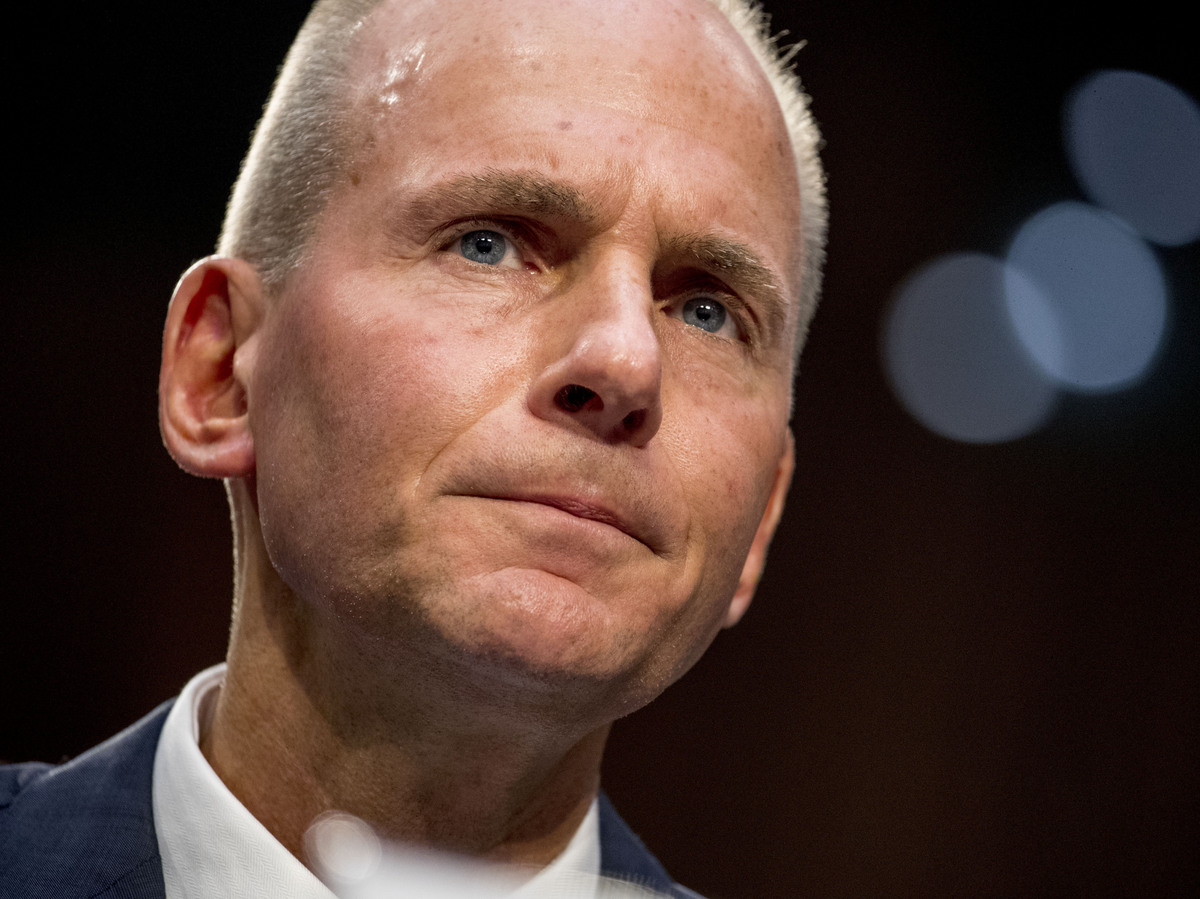 Boeing announced Dennis Muilenburg is out as CEO.

Dennis Muilenburg, the embattled CEO of Boeing, is resigning from his post, the aerospace giant announced Monday. The company says its board of directors has named David L. Calhoun, the current chairman, as successor.

Boeing has been under intense scrutiny in recent months as it has tried to move beyond a major crisis prompted by deadly crashes of its 737 Max series planes that threatens the stability of the company. Officials worldwide ordered the grounding of the aircraft type following the two crashes, which killed a total of 346 people.

Muilenburg's departure from the company is effective immediately, the company said in a statement.

"The Board of Directors decided that a change in leadership was necessary to restore confidence in the Company moving forward as it works to repair relationships with regulators, customers, and all other stakeholders," Boeing said in a press release. It continued: "Under the Company's new leadership, Boeing will operate with a renewed commitment to full transparency, including effective and proactive communication with the [Federal Aviation Administration], other global regulators and its customers."

The leadership changes come after a week of extreme highs and lows for the company.

On the low side, Boeing announced a week ago that it will halt production of the troubled 737 Max jetliner beginning in January. The company said that throughout the 737 Max's grounding, the company continued production of the aircraft and, as a result, roughly 400 planes are in storage.

"We have decided to prioritize the delivery of stored aircraft and temporarily suspend production on the 737 program beginning next month," Boeing said in a Dec. 16 statement.

Boeing also celebrated news Friday when it successfully launched Starliner, an uncrewed spacecraft that's slated to send astronauts into space next year. Although the spacecraft was unable to reach a high enough orbit to dock with the International Space Station, its return to Earth, landing safely in the New Mexico desert Sunday, was seen as an overall success. 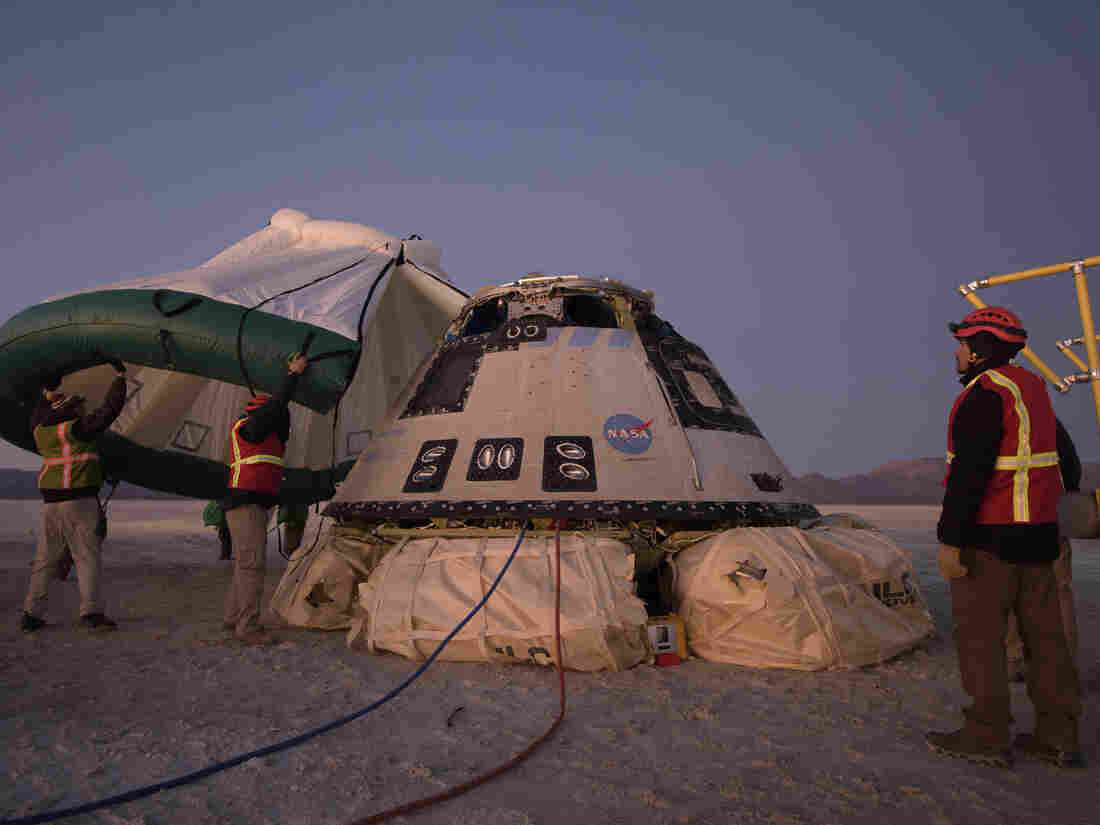 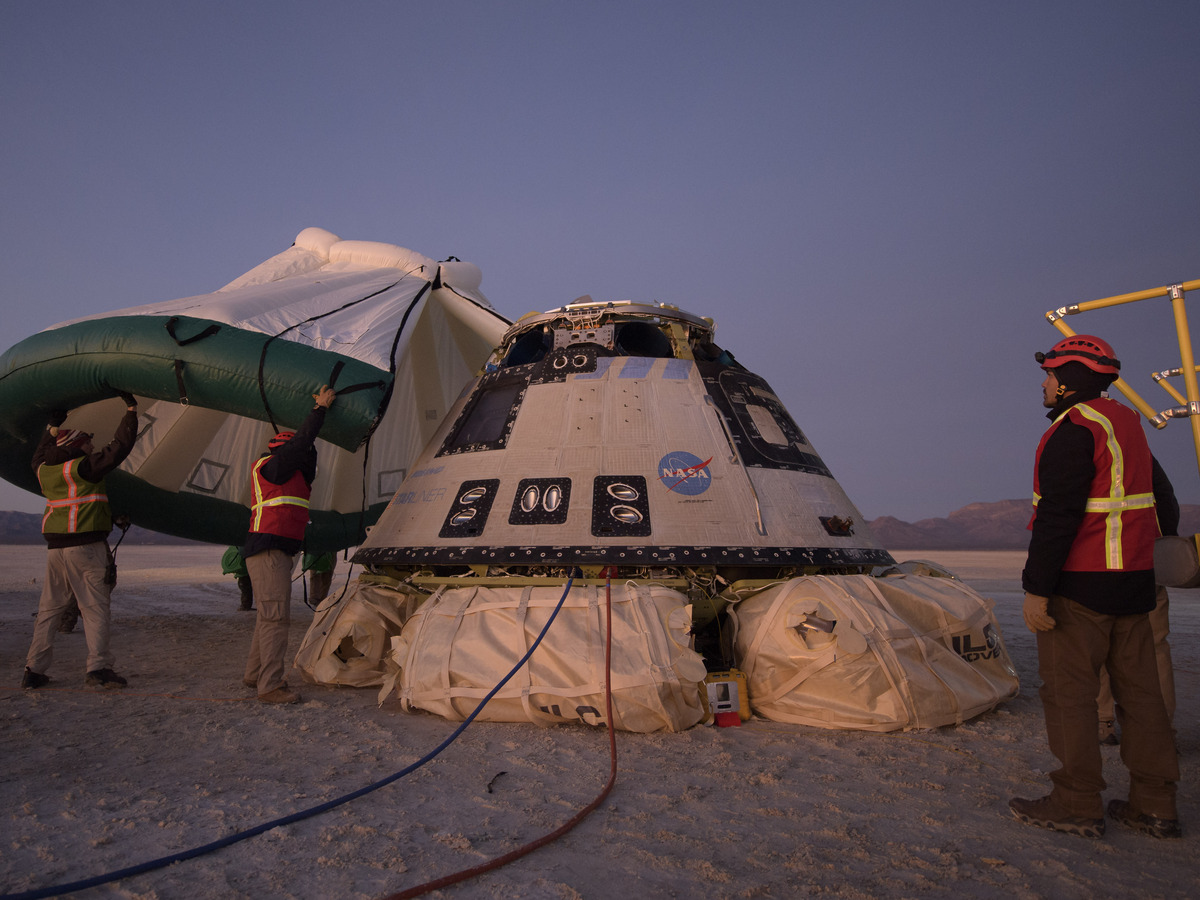 But the triumph of Starliner's historic feat wasn't enough to save Muilenburg's job.

Boeing had expected its 737 Max planes would be given an expeditious all-clear to return to service after federal regulators barred the planes from flying in March.

But earlier this month, NPR reported on FAA Administrator Stephen Dickson issuing a stern warning to Muilenburg ordering him to stand down on his push to accelerate the 737 Max jetliners' recertification.

NPR's David Schaper also noted that Dickson's warning came a day after he was grilled by lawmakers about the alleged lenient oversight his administration implemented over Boeing, a company it is supposed to regulate.

Schaper also reported that an email sent to congressional aviation oversight committees from FAA officials expressed concerns "that Boeing continues to pursue a return-to-service schedule that is not realistic." The email also said that "some of Boeing's public statements have been designed to force FAA into taking quicker action." 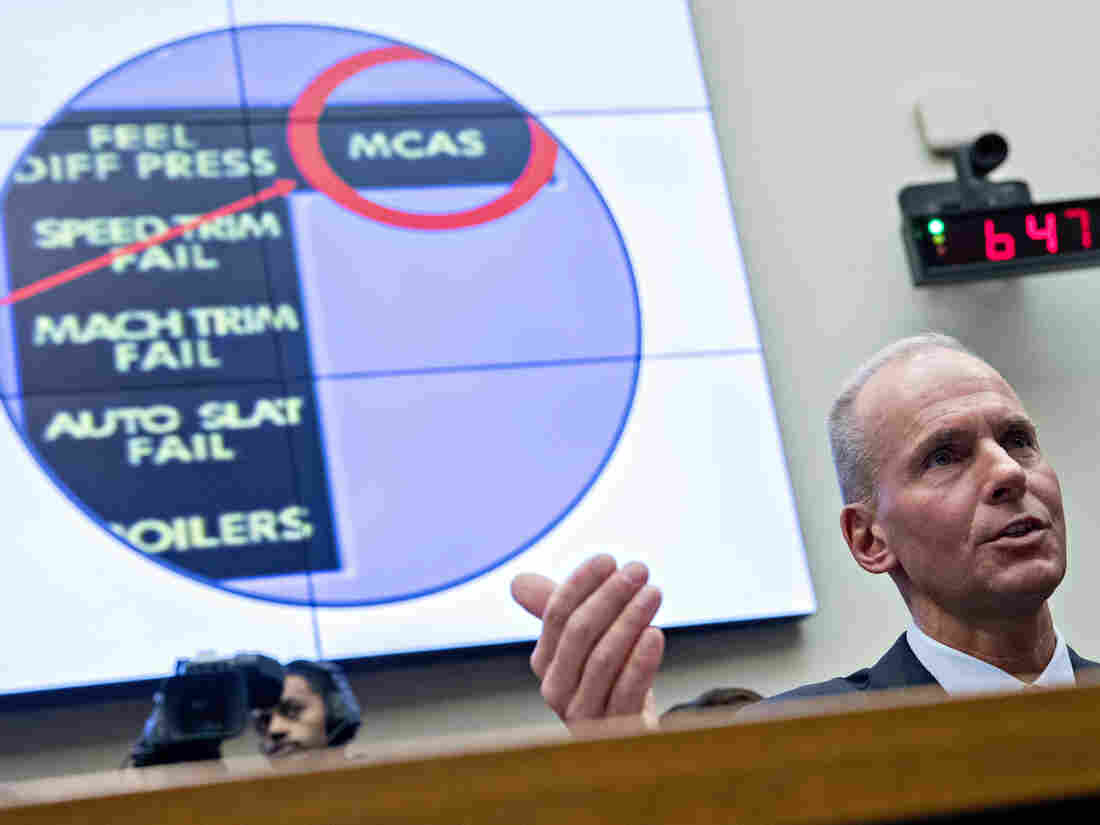 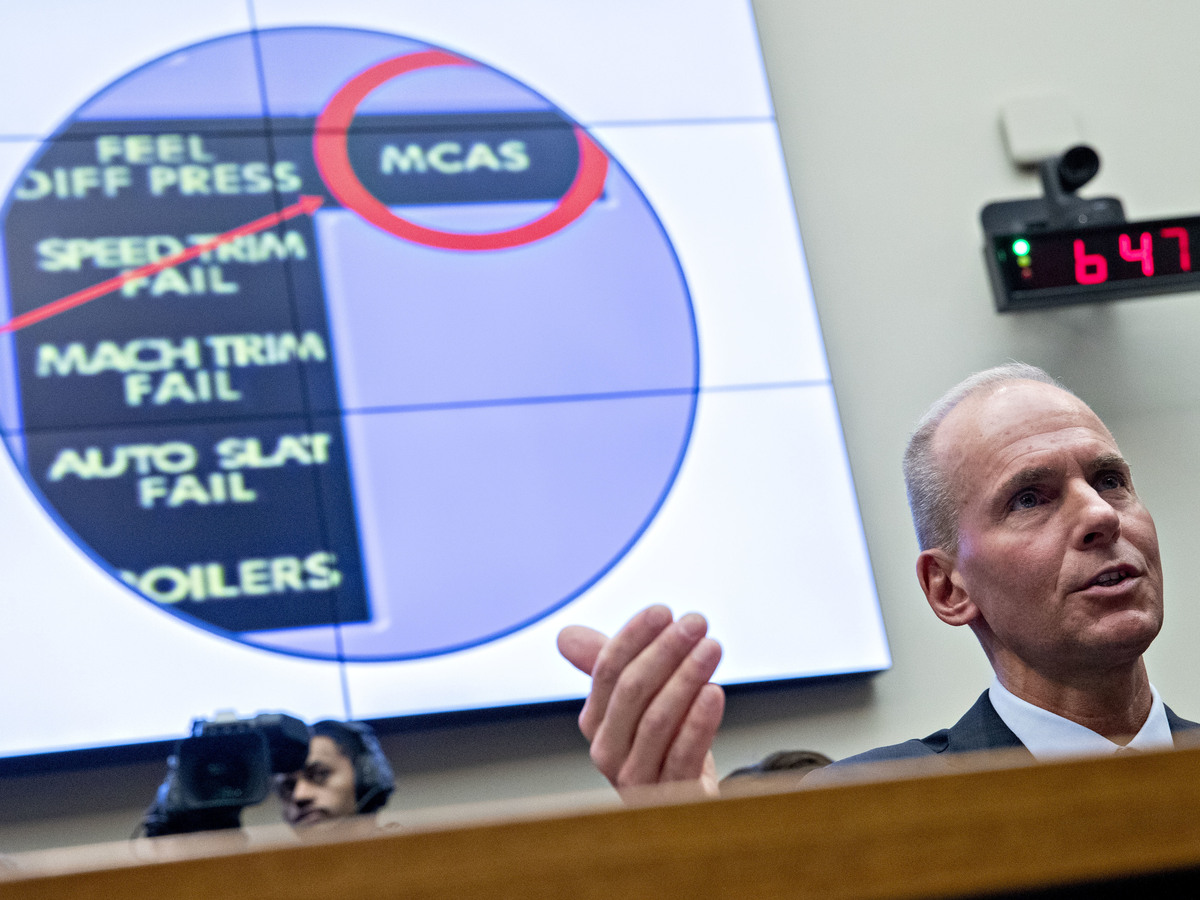 Boeing and regulators must make fixes to the 737 Max's automated flight control system, known as MCAS, before the jetliners can return to the skies.

Investigators say the system is at least partially responsible for the deadly Ethiopian Airlines 737 Max 8 crash in March in which all 157 people on board the flight died. MCAS was also a factor in the 737 Max 8 operated by Lion Air that crashed off the coast of Indonesia in October 2018, killing all 189 passenger and crew members.

A faulty angle-of-attack sensor in the system reportedly forced repeated nosedives and pilots in both crashes failed to regain control of the planes.

Boeing Chief To Families Of Crash Victims: 'We Are Sorry, Deeply And Truly'

Muilenburg has offered repeated apologies to the families of the victims of the crashes, including during a Senate Commerce, Science and Transportation Committee that took place on the anniversary of the Lion Air tragedy.

Seated not far behind Muilenburg at the hearing were people holding large photographs of those killed in the crashes.

"On behalf of myself and the Boeing company, we are sorry, deeply and truly, sorry," Muilenburg said during his opening statement.

The company announced that Calhoun will take over the top executive post in mid-January and that he will remain part of Boeing's board.

"I strongly believe in the future of Boeing and the 737 MAX," Calhoun said in a statement. "I am honored to lead this great company and the 150,000 dedicated employees who are working hard to create the future of aviation."

Boeing is also trying to see its way out of financial difficulties that could have an even larger impact in the U.S. and around the world.

When Boeing announced it would pause production of the 737 Max next month, it also said "no layoffs or furloughs expected at this time" adding that "affected employees will continue 737-related work, or be temporarily assigned to other teams."

But some industry analysts are less optimistic. "Several analysts project that the move will slash economic growth by half a percentage point and eventually lead to layoffs," NPR's Jim Zarroli reported last week.

Boeing is the nation's largest exporter, so suspending production of the 737 Max is all but certain to have a ripple effect impacting large and small companies up and down the supply chain.

Southwest Airlines, which uses more 737 Max planes than any other domestic carrier, announced it was dropping the aircraft from its flight rotation longer than expected.

It announced it was "proactively" nixing the Max from its flight schedule until at least April 13 of next year.

American Airlines made a similar move a few days earlier, saying it didn't plan on having Max jetliners back in its flight rotation until at least early April.