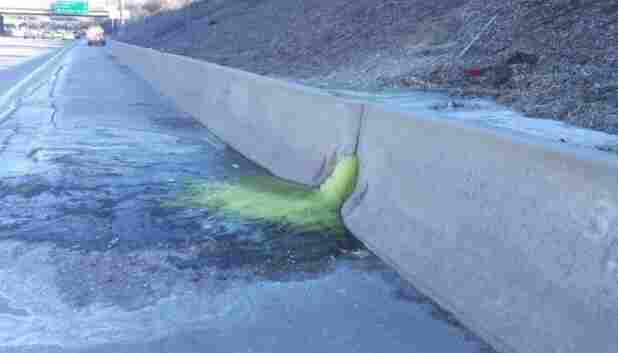 Environmental safety officials in Michigan say they think they have determined the source of a mysterious green slime that seeped onto an interstate on Friday. The Michigan Department of Transportation hide caption

Michigan motorists were taken aback on Friday by an alarming image lurking just off the highway: a mysterious green liquid oozing from the walls of Interstate 696, spilling onto the road's shoulder.

"It certainly is an impressive sight," said Jill Greenberg, spokeswoman with the Michigan Department of Environment, Great Lakes and Energy.

Soon after, state and federal environmental officials descended on the interstate just north of Detroit, and it did not take long to trace the green liquid's source.

Just up the hill from the road sits the now-shuttered Electro-Plating Services Inc. The owner of the industrial site was prosecuted for operating an unlicensed hazardous waste storage facility. Last month, the man, Gary Sayers, was sentenced to a year in federal prison and ordered to pay $1.4 million to clean up the plant.

After blocking off the shoulder and studying the slime, officials suspect the substance is groundwater mixed with a chemical called hexavalent chromium. According to Greenberg, it likely came from the closed industrial site.

"Our hazmat team got there early and assessed the situation and determined there's no imminent risks to public," she said. "The drinking water is not impacted because the area is serviced by municipal drinking water, not groundwater."

Federal safety officials describe hexavalent chromium as an industrial byproduct that can be cancer-causing if ingested.

"Chromium metal is added to alloy steel to increase hardenability and corrosion resistance," states the Occupational Safety and Health Administration, noting the compounds "may be used as pigments in dyes, paints, inks, and plastics."

The chemical was figured in the 2000 film Erin Brockovich, named after the environmental activist who fought against the presence of the chemical, also known as chromium 6, in ponds in Southern California. A legal battle led by Brockovich over the water contamination resulted in a $333 million settlement.

State and federal officials are not expecting the Michigan ooze to prompt a sequel.

The Environmental Protection Agency has sent samples of the substance to a lab to confirm their suspicions, the results of which are expected on Friday.

At the industrial plating facility, federal officials conducted air monitoring tests and did not find any hazardous material in the air, in addition to pumping any residual slime from the site's basement, Greenberg said.

"It's important to remember that there is no imminent threat," she said.