Accessibility links
'1917' Is Visceral And Beautiful Sam Mendes' technique — stringing together a series of long takes to seem continuous, as if the story's events unfold in real time — makes for a "wholly absorbing cinematic experience." 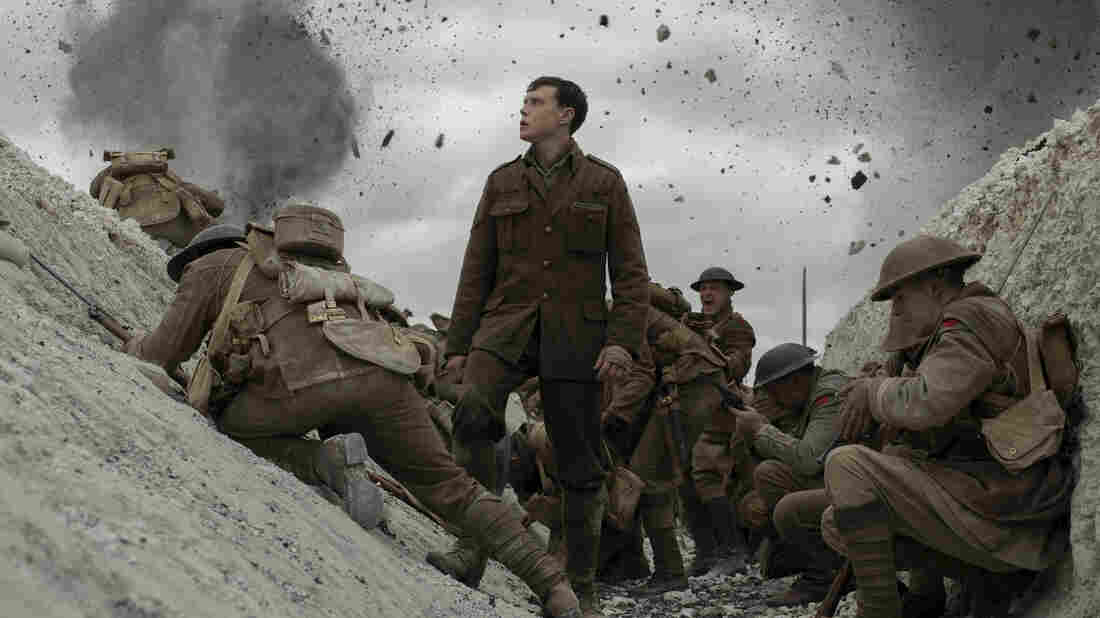 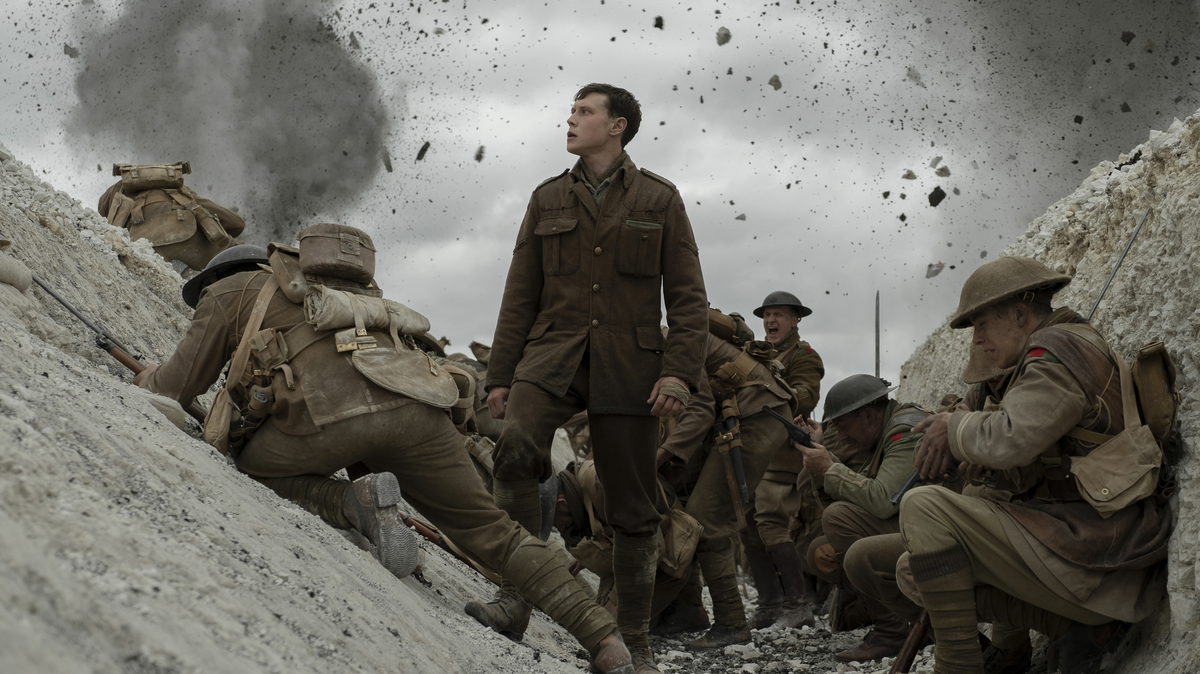 World War I was a low-tech / high-tech conflict, "advancing" over four grinding years from horse-drawn carts and bayonets to slaughter via airplane, tank, machine gun, and poison gas. Sam Mendes's 1917 is a low-tech / high-tech movie, a harrowing quest by two British soldiers across nine miles of contested France to deliver a lifesaving message. The urgency of its plot is brilliantly matched to a formal gimmick: 1917 is comprised of a small number of long takes seamlessly woven together to look like one.

How many takes? Only Mendes, cinematographer Roger Deakins, and editor Lee Smith know for sure. Mendes claims some shots run to eight-and-a-half minutes. What matters is that the additional labor they've taken on to tell their simple story in this way has paid off in a visceral and wholly absorbing cinematic experience. In an era where the foregrounding of digital effects to create sensation has made them too commonplace to thrill us, this sort of complicated dance between actor and camera operator goes a long way towards restoring the immersive quality that the best genre films deliver.

And this is a genre film — a war movie — however highbrow its pedigree. (Deakins and Smith each won Academy Awards in 2017 after working on many exemplary movies; Mendes got his 20 years ago for the noxious American Beauty.) It musters extraordinary technical daring in the service of a homily that boils down yet again to simply, "War is Hell."

Like Nolan's time-fracturing World War II epic Dunkirk, 1917 is peppered with famous British actors doing yeoman's work but gives most of its screentime to fresher, equally capable faces. George MacKay and Dean-Charles Chapman play Schofield and Blake, respectively, Lance Corporals dispatched to deliver orders aborting a long-planned infantry charge. Their German adversaries have cut the phone lines from the British position, so these two boys must carry the message the way Pheidippides conveyed the news of the Persian defeat at Marathon 2,400 years earlier — on foot. If they don't deliver their warning within a few hours, 1,600 of their comrades will march into an ambush, Blake's older brother among them.

Certainly it would make sense for their superiors to send several teams with copies of the stand-down order, but who knows? The screenplay (by Mendes and Krysty Wilson-Cairns, and inspired by recollections of Mendes' grandfather, to whom the picture is dedicated) is told entirely from the perspective of these two exhausted, hungry, terrified grunts — we never know anything they don't. It's more common in thrillers to give the audience information unknown to the protagonists as a means of creating suspense. Here, the suspense comes from the immediacy of Deakins' fluid camerawork, navigating flooded trenches, bomb craters full of quicksand-like mud, underground German barracks, and ruined villages. This makes every threat these two soldiers face seem more, well, threatening: The audience I saw the film with gasped when Schofield accidentally dipped his wounded hand in a pool of fetid water, before he'd ever encountered a human enemy.

In one memorable sequence, Schofield flees from German pursuers at night, the only illumination coming from flares launched overhead. After a few minutes' rest in a basement he's on the run again, the predawn turning the sky behind him from pitch black to inky blue. As with Dunkirk (the film for which 1917 editor Lee Smith won his Oscar), I found myself wondering at the paradox of a story set against a backdrop of war — the ultimate expression of human cruelty — having been so beautifully made.

A year ago, Peter Jackson's World War I documentary They Shall Not Grow Old showcased century-old footage restored and converted to 3D, bringing the once-distant faces of these long-dead veterans to stunning life. Like Mendes' new film, it was dedicated to its maker's WWI-vet grandfather. Jackson has championed higher frame rates as a way of reviving cinema — he's used the metaphor that he wants to remove the window pane through which we've been watching movies for as long as they've existed. So far, audiences have rejected every major release shown in this format as, ironically, phony looking. Shown measurably more, we feel immeasurably less.

Mendes' long-take technique is a surer path to that same effect of verisimilitude. He's always been prone to grandiosity, which gave his recent entries in the 007 franchise, Skyfall and Spectre, an agreeable friction of pomp and pulp. But 1917 is his strongest work. It brings the first of a bloody century's comprehension-defying tragedies down to thrillingly human scale.