Accessibility links
House Democrats Say House Speaker Nancy Pelosi Born For This Moment In History Pelosi faced questions over whether her time as the top Democratic leader in the House was done. She has since silenced those critics. 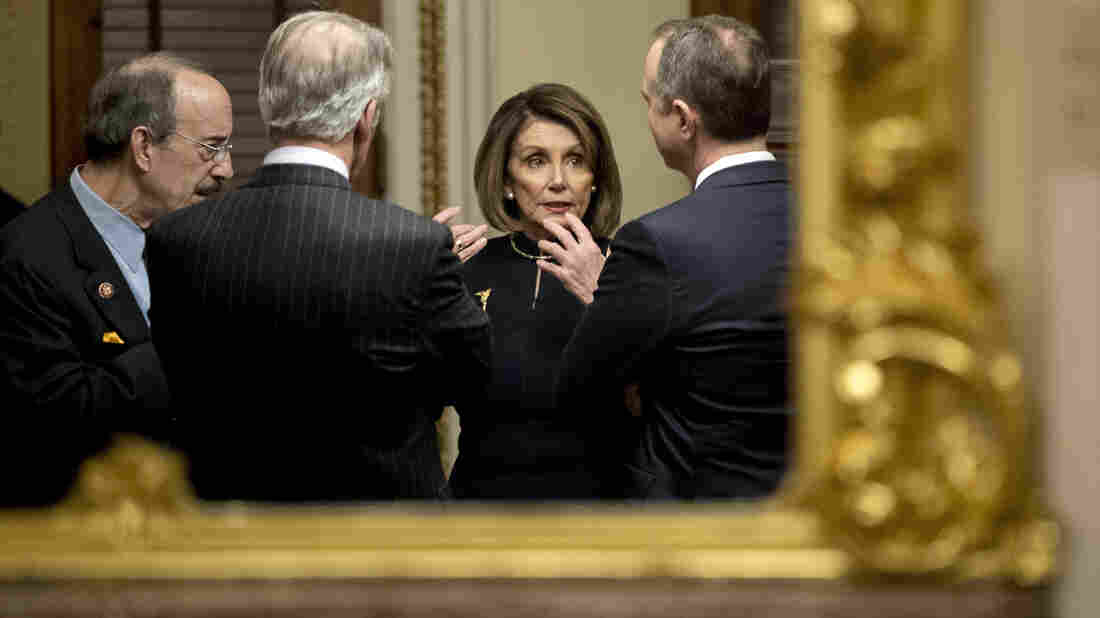 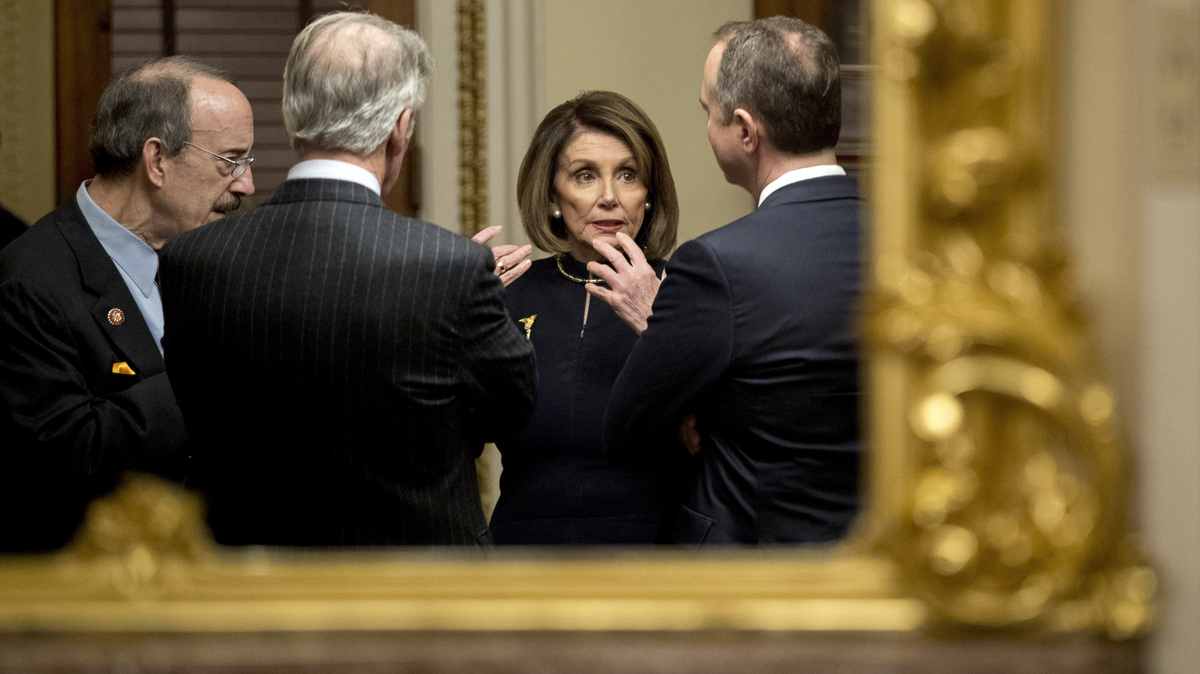 It wasn't that long ago that House Democrats didn't know who would lead them.

They were warring over the speaker's post just days after the 2018 midterm elections handed them back the majority.

But Nancy Pelosi was certain of her fate.

"I intend to win the speakership with Democratic votes," Pelosi told reporters soon after the November elections. "I happen to think at this point, I'm the best person for that."

Pelosi became the first female House speaker in 2007 when Democrats last had control of the lower chamber. But many in her own party weren't so sure she could do it again: Pelosi was facing a Democratic rebellion in her ranks.

Among the newly elected liberal wing of the freshman class, New York Rep. Alexandria Ocasio-Cortez and other members of the so-called "squad" withheld their support for Pelosi weeks ahead of the election.

Some new, moderate members campaigned on ousting Pelosi from leadership. And along the way, some incumbent Democratic members joined their cause.

Minnesota Rep. Dean Phillips was one of those freshman moderates looking for a new name at the top of the House chamber. And he told Pelosi that plan directly.

"I thought it was time for new leadership," Phillips said after a recent caucus meeting.

But he changed gears after he got to Capitol Hill, saying these times called for someone who understood "how the levers in this place operate." Now, Phillips says choosing Pelosi as speaker marks one of the most meaningful decisions in his political career.

"Thank goodness, thank goodness that we have Nancy Pelosi speaking for the House of Representatives," Phillips said, "because I don't think there is a better, more qualified, more principled and more effective person for these times and these circumstances than she."

Massachusetts Rep. Seth Moulton was one of the more public figures leading the rebellion against Pelosi. The third-term House Democrat was a key figure in a November 2018 letter signed by more than a dozen Democrats — including other incumbents — vowing new leadership.

But Moulton's effort also faltered as Pelosi calmed the rebellion from the left and moderates and no heir apparent rose to challenge her.

By the time of a closed-door, secret Nov. 28, 2018, caucus vote, Pelosi emerged claiming the nomination to ascend to her second term as speaker, this time under President Trump.

"It was inspiring to hear my colleagues place my name in nomination once again as speaker of the House," Pelosi said following the meeting. "It has been my privilege to listen to new members ... members who have been here for a while, hear their views of how we go forward."

During the public vote on the House floor in January, 220 Democrats voted for Pelosi. Only 12 Democrats — not enough to jeopardize the vote — voted against her.

Now, Moulton joins others to rave about Pelosi's time at the helm this past year. 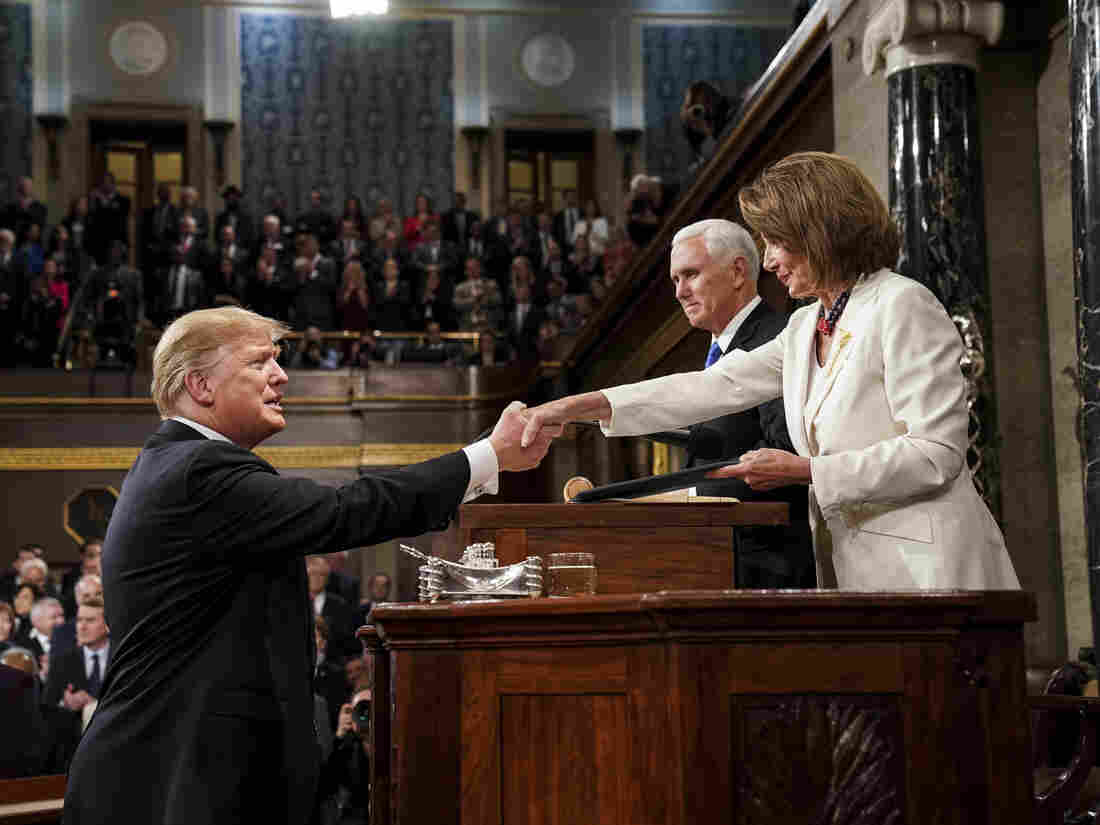 President Trump shakes hands with House Speaker Nancy Pelosi as he arrives in the House chamber before giving his State of the Union address to a joint session of Congress in February. Doug Mills/AP hide caption 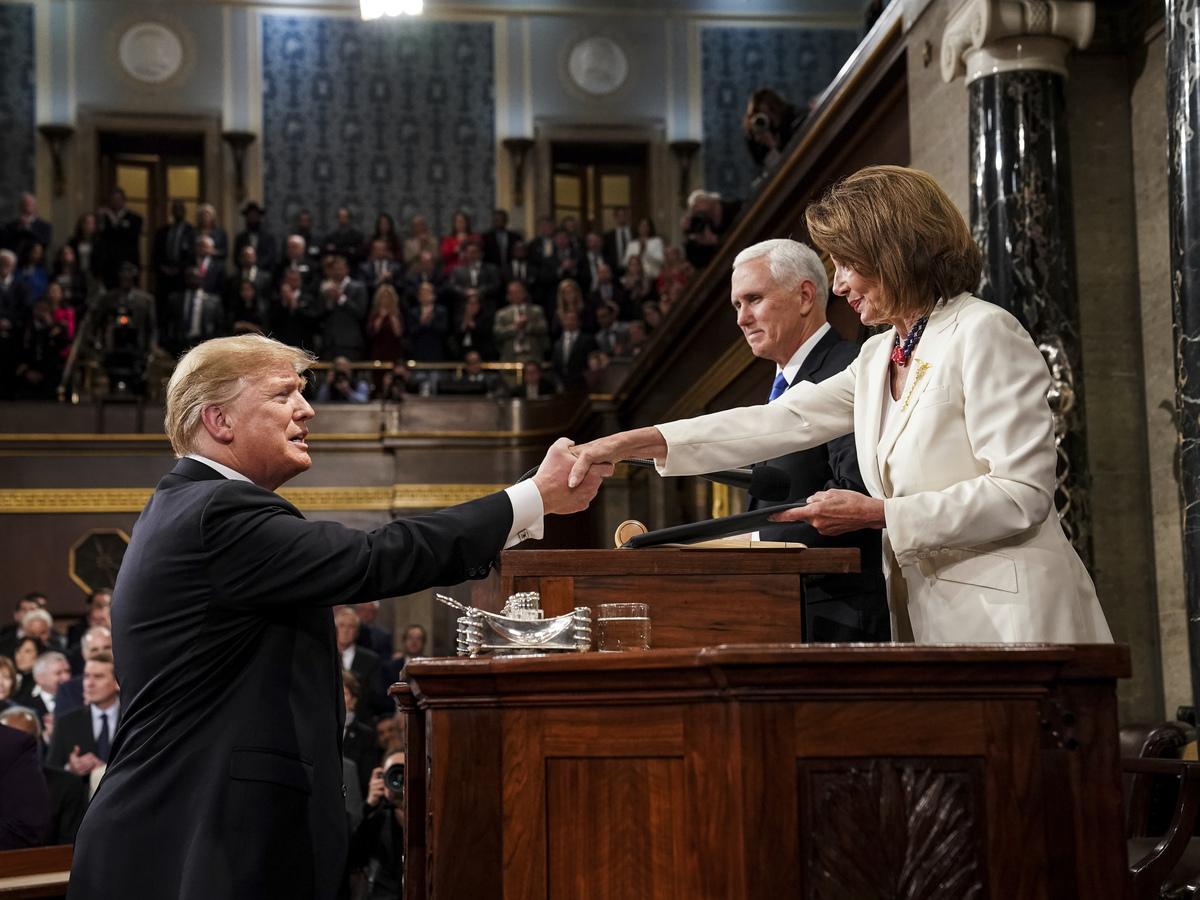 President Trump shakes hands with House Speaker Nancy Pelosi as he arrives in the House chamber before giving his State of the Union address to a joint session of Congress in February.

Pelosi began her new term as speaker in the midst of the longest government shutdown in history, which was triggered by a fight with Trump over border wall money.

Quickly, Trump and Pelosi tangled over this and whether he could still deliver a Jan. 29 State of the Union address to Congress in the midst of a government shutdown. Pelosi didn't think so.

"She's afraid of the truth," Trump said in one of his classic barbs against Pelosi.

The standoff ended with Trump calling for an executive order to fund the border wall through emergency funding. And the State of the Union was rescheduled for February.

"She runs circles as a strategist around pretty much everybody," said Illinois Rep. Jan Schakowsky, a Pelosi ally. "I think there were, for a while, some naysayers, and I think they're all probably denying it now that they ever were — because she is so universally recognized as so incredibly competent and smart and courageous."

Under this new chapter, Democrats had a seat at the negotiation table in what had been a Republican-dominated administration, giving them new leverage in budget talks and oversight of President Trump.

And from the earliest months of Pelosi's new term as speaker, she was dogged by questions about Trump and impeachment.

In April, special counsel Robert Mueller released findings that the president obstructed an investigation into Russian interference in the 2016 election. And the drumbeat in her caucus calling for impeachment grew.

But Pelosi resisted, saying impeachment needed to have support from Republicans and the public.

"I don't think there's anything more divisive we can do than to impeach a president of the United States, and so you have to handle it with great care," she said during an interview with CNN's Fareed Zakaria at the Council for Foreign Relations. "It has to be about the truth and the facts to take you to whatever decision has to be there. It should by no means be done politically."

But all of that changed when a whistleblower came forward to claim that the president was pressuring Ukraine to investigate a political rival in exchange for U.S. military aid.

"This case has a national security piece to it that is very alarming," Pelosi told NPR days ahead of her Sept. 24 announcement to trigger a formal impeachment inquiry into President Trump. She later added, a "president should be indicted, if he's committed a wrongdoing — any president. There is nothing, anyplace, that says the president should not be indicted."

Once Pelosi was on board, she led her party through a contentious process that ended with the impeachment of the third sitting president in history.

A fight with the president

Over the year, Pelosi proved to be Trump's most formidable challenger in Washington, D.C., her supporters say. That moment was captured visually during an October White House meeting where Pelosi was pictured standing up to Trump and pointing.

Trump shared the photo in an angry tweet, but Pelosi's team quickly used it as a cover photo for her social media accounts. Later, Pelosi explained she was telling the president that "all roads lead to [Russian President Vladimir] Putin."

Schakowsky, the Pelosi ally, says that moment showed her grit. And it wasn't a surprise, either.

She's "the one person — of course, the only woman, too — to stand up to him in the [White House] and point to the president of the United States and take him to task," Schakowsky added. 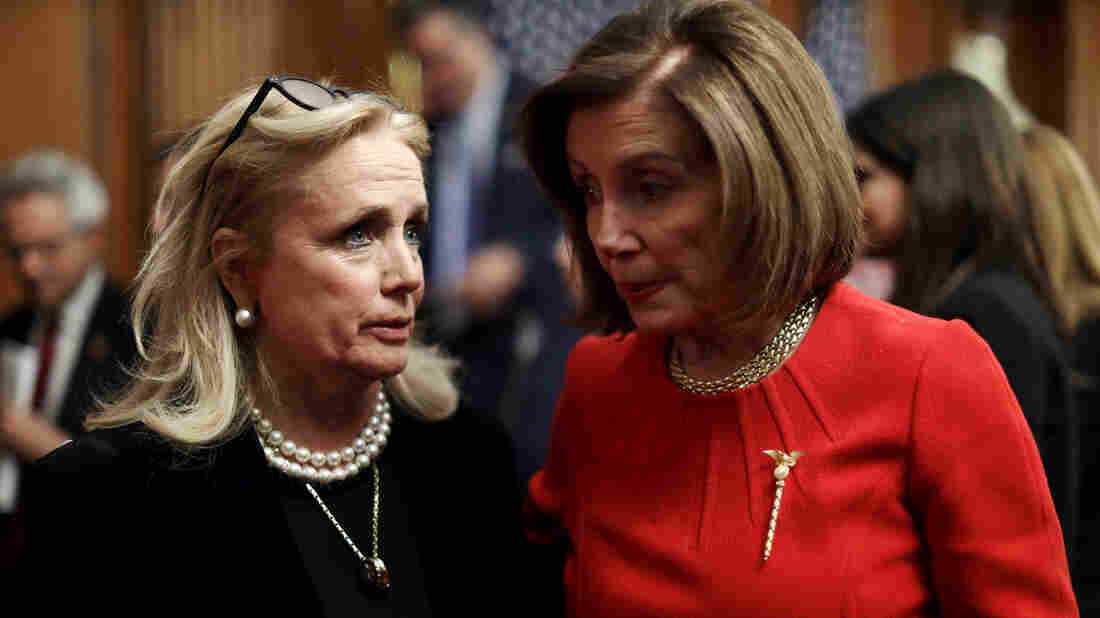 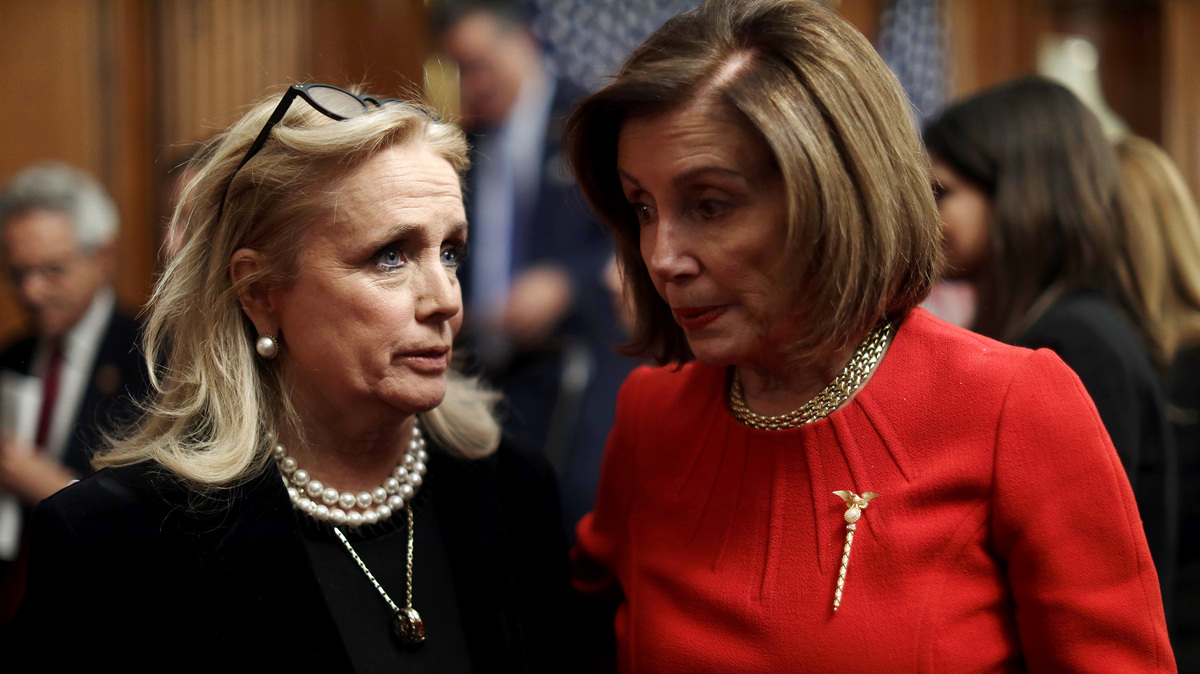 Speaker Nancy Pelosi talks to Rep. Debbie Dingell in the Capitol on Dec. 19.

"When they told me it would probably be a matter of a few days, she was supportive and emotionally, just a friend," Dingell recently said, her voice shaking as she recalled the memory. "And yet, when he died and I was feeling overwhelmed, she put that backbone in me and helped me focus and make the decisions."

"She knows what's she got to be, what she's got to do and when she's got to tell you 'got to stand up tall and do what you've got to do,' " she said. "She's a very effective woman."

Pelosi came to Dingell's defense recently after Trump attacked her late husband at a Dec. 18 political rally just after he had been impeached. That night, Trump implied John Dingell might be "looking up" from hell.

"The president clearly is insecure when it comes to statespersons, whether it was [the late Arizona Republican Sen.] John McCain," Pelosi told reporters, and "now John Dingell."

The comments came in the midst of a historic week for Pelosi and House Democrats.

They also reached agreements for a major trade deal and a massive bipartisan spending package. Both were approved in the last legislative week of 2019 as the impeachment articles of abuse of power and obstruction of Congress against Trump.

The moves are a testament to Pelosi's leadership, Dingell notes.

"She took one of the most diverse caucuses in the history of this country — people with lots of intense, strong, emotional passions, different thoughts — and brought us together," she said.

Even though impeachment helped bring her caucus together, Pelosi has rejected that will be her legacy. At a Dec. 6 CNN town hall, Pelosi stressed that she hopes she'll be remembered for how she got a major health care bill passed.

"I want to be remembered as part of the Affordable Care Act," she said. 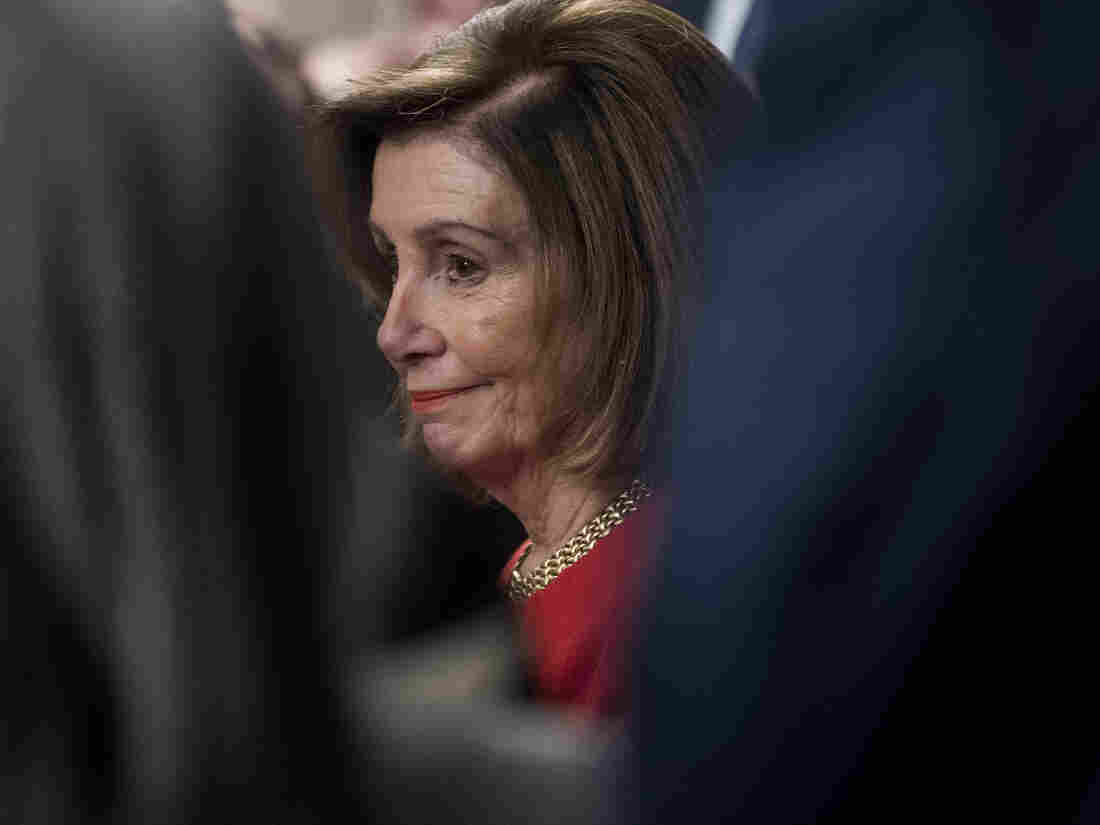 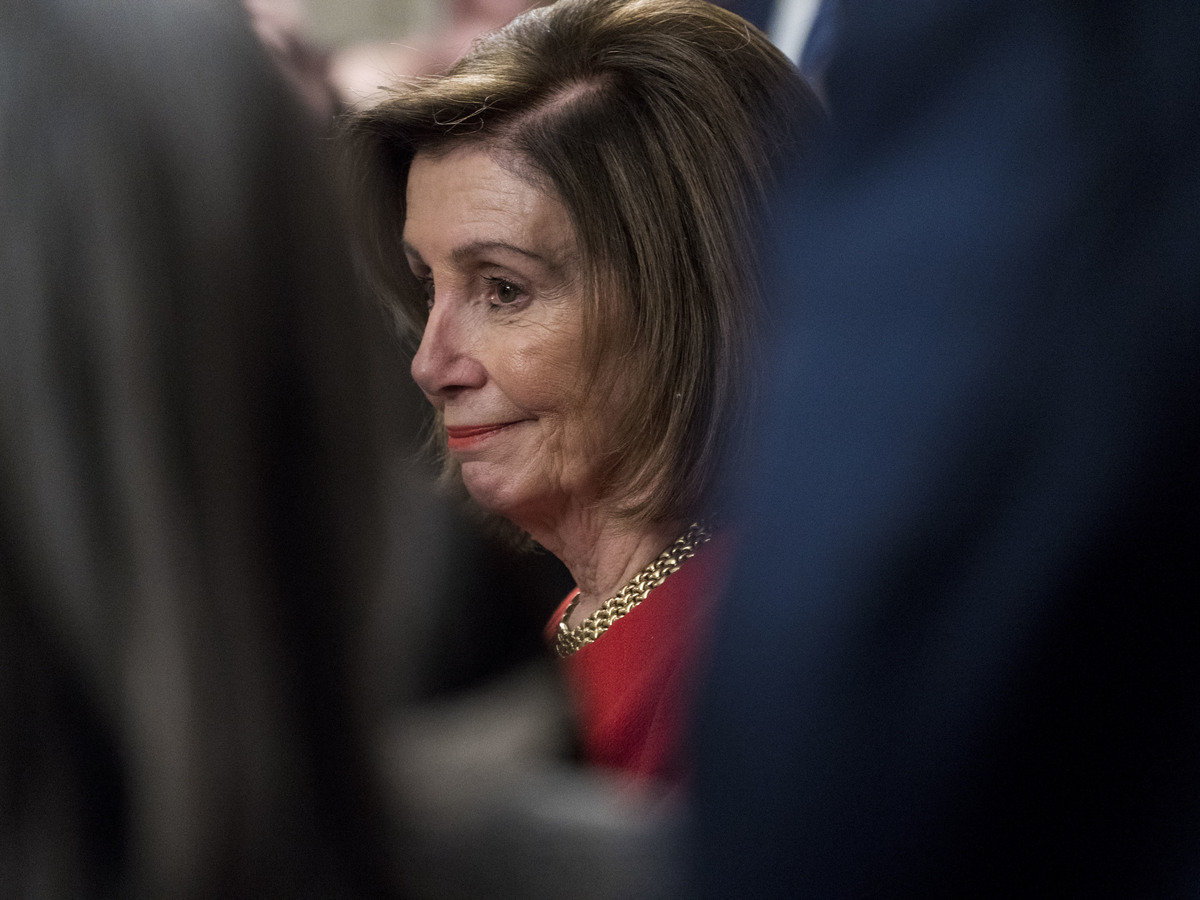 House Speaker Nancy Pelosi listens during a Dec. 19 press conference with House Democrats held to highlight the legislative accomplishments of the year.

But even in the midst of this year's accomplishments, partisan battles remain.

Pelosi has said she won't name House managers to transmit the articles of impeachment to trigger a Senate trial. She was defending arguments in her caucus that by immediately moving the articles it would aid Republicans, led by Senate Majority Leader Mitch McConnell, in their plans to exonerate Trump in a quick trial.

It's a new stalemate, but this time, Pelosi has already extended an invitation so Trump can deliver the State of the Union Feb. 4.

"In their great wisdom, our Founders crafted a Constitution based on a system of separation of powers: three co-equal branches acting as checks on each other," Pelosi wrote to Trump. "To ensure that balance of powers, the Constitution calls for the President to 'from time to time give to the Congress Information of the State of the Union.' "

In the coming year, Pelosi will have her hands full keeping her caucus together.

They'll head into another round of fights with Trump and his Republican allies in the midst of a partisan national election in 2020. How that plays out could determine whether she'll remain speaker.