Accessibility links
A Christmas Tree Thrives On Farms, Struggles In The Wild The Fraser fir is found in a lot of homes around Christmas. But its wild cousins have been in decline for almost a century because of a small invasive pest. 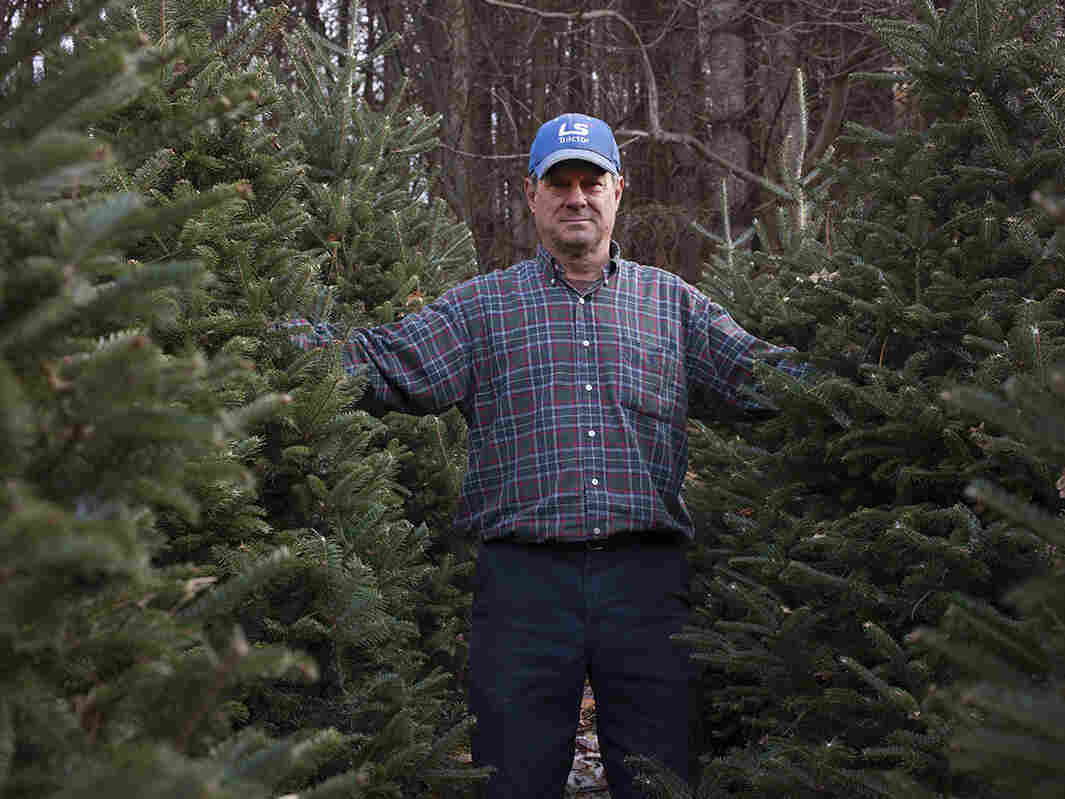 Joey Clawson at one of his Christmas tree stands on the first day of harvest. He grows about 95,000 firs on his operation. Irina Zhorov for WHYY hide caption 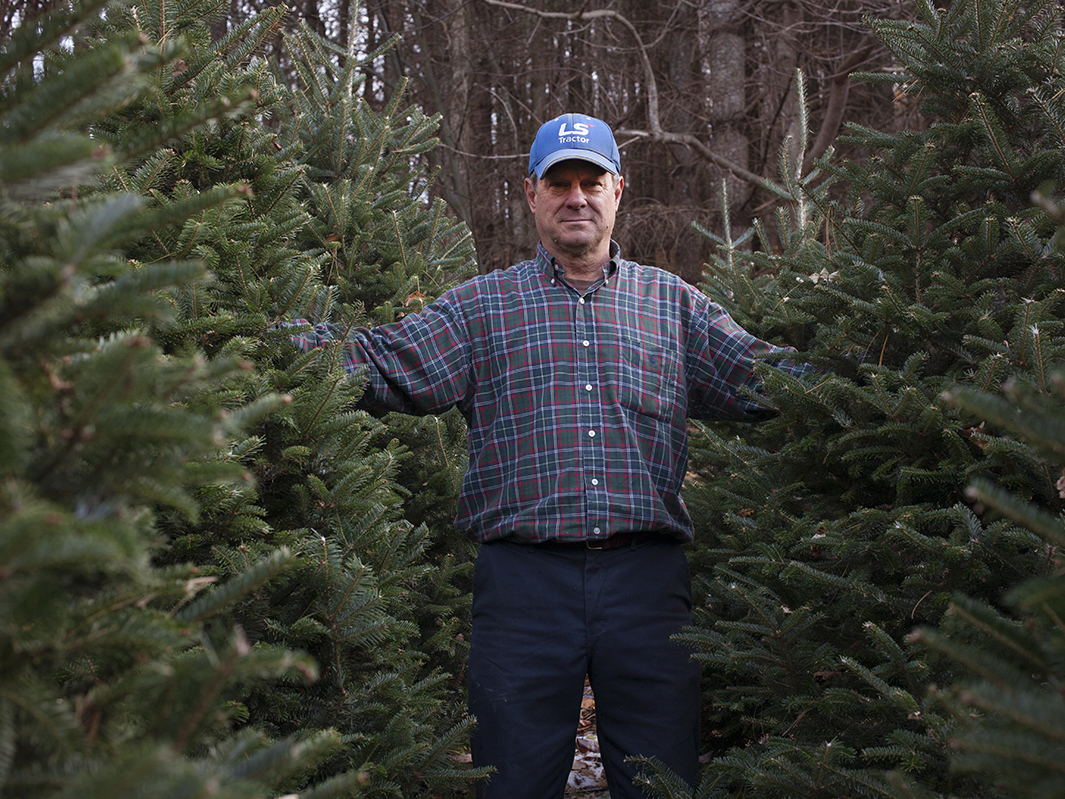 Joey Clawson at one of his Christmas tree stands on the first day of harvest. He grows about 95,000 firs on his operation.

On the first day of cutting at Joey Clawson's Christmas tree farm, in the mountains outside Boone, N.C., four workers picked their way through Fraser firs planted in neat rows. It took just a few seconds to chainsaw each tree, which Clawson had spent years pampering.

He has about 95,000 trees in the ground, of various sizes and ages. For nearly a decade before harvest, workers fertilize individual trees by hand, shape them one by one with giant machetes, and, if needed, help them fight pests.

"It's four to five months that I'm out here weekly, with magnifying glass, checking bunches of trees in every field," Clawson says. "That's a lot of hours I'm spending taking care of my trees."

Pests have become a problem on tree farms like Clawson's, which tend to be lower in altitude than the trees' native range. If Clawson spots an outbreak — of various aphids, mites, hemlock scale, or the balsam woolly adelgid — he sprays with insecticide.

All in the name of a perfect Christmas tree.

"Because it's all about creating family memories," Clawson says.

North Carolina grows more Christmas trees than any other state except Oregon. It's an important, nearly $90 million industry for the state, which produces more than 4 million trees per year. Most of the trees are Fraser firs — their needles don't shed as much as other evergreens, and they have limbs strong enough for ornaments.

But these prized Fraser firs, which millions of families put up in their homes for Christmas, have become more rare in the wild. That's due to the balsam woolly adelgid, a bug that can be controlled on a farm, but not in a forest.

When he graduated high school in the 1970s, he and two friends took a trip to the Smoky Mountains and hiked, Neufeld says.

"You walked through this dark, dank forest with Fraser firs and a couple of spruce sticking up above you, with moss on the ground and lichens hanging from branches," he says. "Ten years later, almost all those trees had died from the adelgid."

The balsam woolly adelgid injects a toxin into trees. That triggers abnormal growth and makes the trees unable to take up water, which eventually kills them.

Howard says it arrived in the region after extensive logging over a hundred years ago. In a push to reinvent the area around tourism, wealthy landowners and the government decided to replant the highest peak in the Appalachians, Mount Mitchell. They imported trees from Europe, including the silver fir, which carried the adelgid on it.

The insect is tiny, about the size of a grain of sugar, so it wasn't immediately spotted. Slowly, it began to attack native fir trees. By the 1960s, people were noticing dead trees in the forests. Die-offs spread rapidly in the '70s and '80s.

"It's had a devastating effect here," Neufeld says.

In some native fir stands, the adelgid has killed more than 90 percent of the trees. But on Roan Mountain, a ridge in Tennessee about 6,000 feet high, many firs still stand. 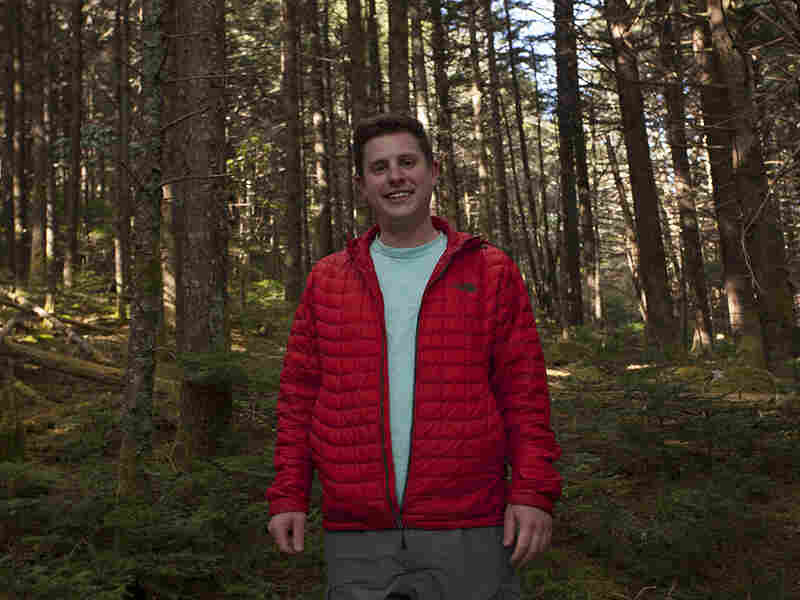 Scott Cory in a fir forest on Roan Mountain, in Tennessee. He has been studying Fraser first in nature for nearly a decade. Irina Zhorov for WHYY hide caption 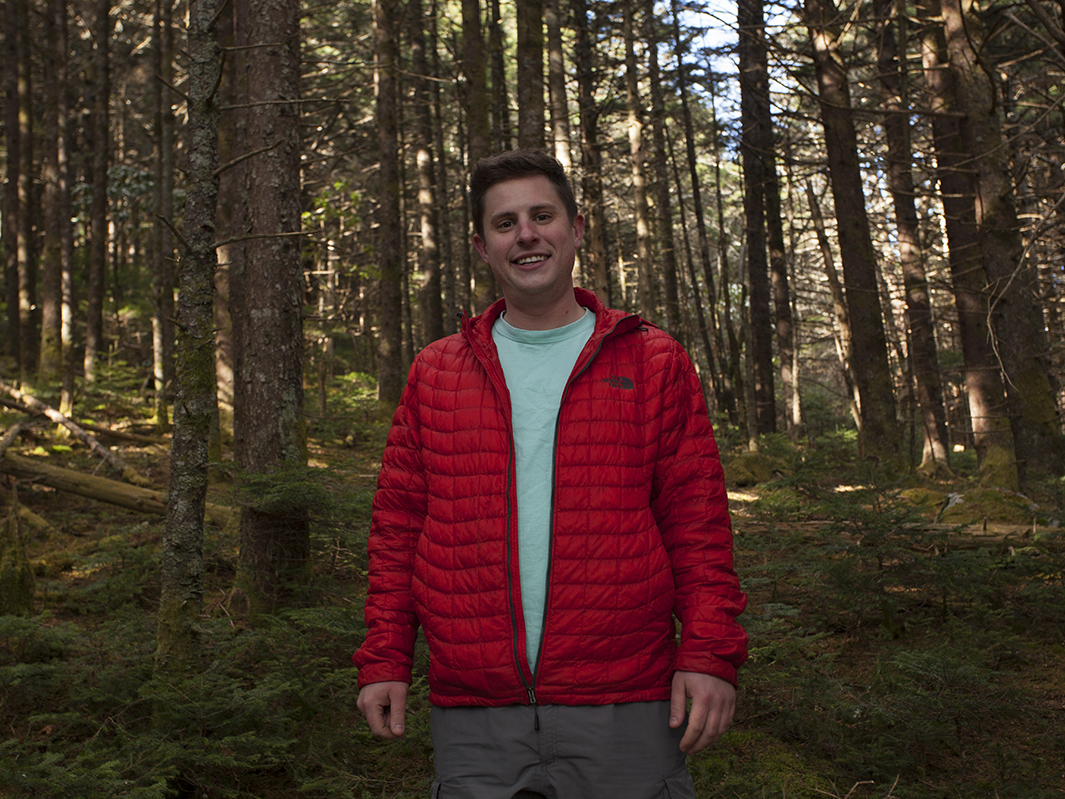 Scott Cory in a fir forest on Roan Mountain, in Tennessee. He has been studying Fraser first in nature for nearly a decade.

Scott Cory, a PhD student studying Fraser firs, walks up a road littered with coyote scat, then climbs a bank into the forest. It is a classic spruce-fir forest, just like Neufeld hiked in his youth. Everything is mossy and the dense stand of trees was dark enough to mistake for deep dusk. This is Appalachia, but it looks like the Pacific Northwest and it feels like elves could be watching from emerald mossy perches.

Adelgid aside, this stand of firs is pretty rare, Cory says. At the end of the last glaciation, about 10,000 to 12,000 years ago, the area was a lot colder and the firs lived all up and down the mountain. As the area warmed, the trees had to move farther and farther to the top of the mountain. Today, the Fraser firs live on just seven mountain peaks in the southern Appalachians, and Roan Mountain is one of them.

Cory runs his fingers through a fir's soft needles — one of the characteristics that makes it a desirable Christmas tree — and says that, genetically, the trees that grow on Roan Mountain are the same as the ones on farms.

"But as far as what they do, you know, for their ecosystem, totally different," he says.

On the mountain, the Fraser firs are the basis of a whole ecosystem. They keep the air and water clean, store carbon from the atmosphere, and provide habitat for many animals, such as owls and flying squirrels. Some flora and fauna, like a tiny, endangered tarantula called a spruce-fir moss spider, live only here.

After leaving the forest, Cory walks farther up the road until he spotted a tract of firs killed by the adelgid. The stems are white and barkless and glow in the otherwise dim wood.

On the forest floor, new firs have sprouted. The adelgid affects only older trees, with cracked bark it can penetrate. These young saplings are protected by smooth bark, so they're safe, for now. The forest seems like it is recovering but it's unclear whether these new firs will in time fall victim to the adelgid.