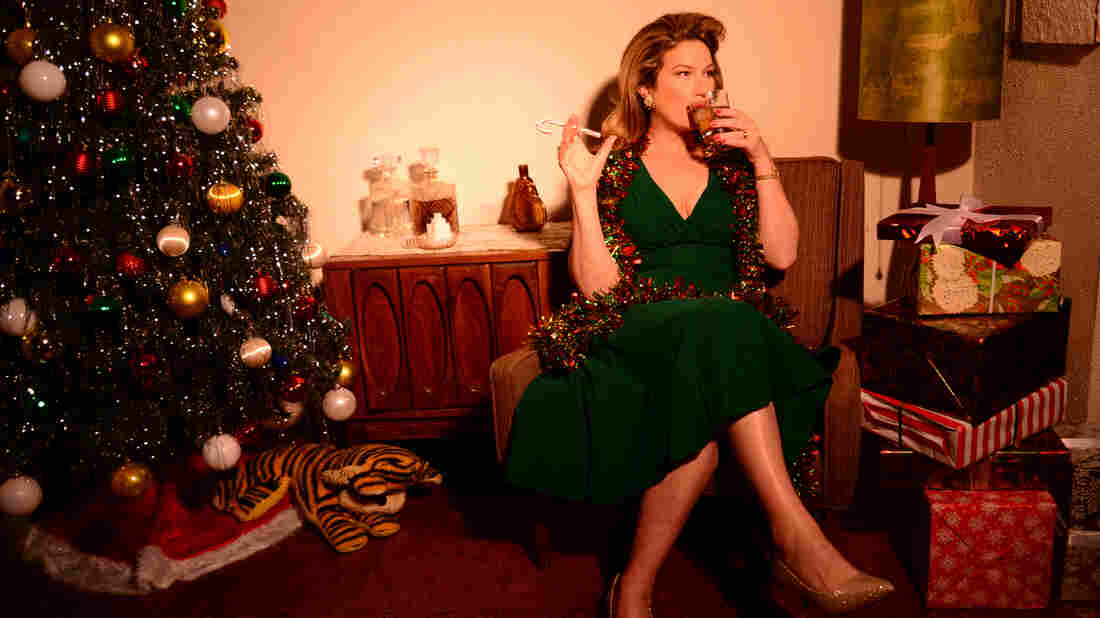 "It's the most nauseating idea in the world: a comedian in a gown leaning against a baby grand without making a joke," Ana Gasteyer says. There are plenty of jokes (and a lot of great singing) on her new holiday album. Shervin Lainez/Courtesy of the artist hide caption "It's the most nauseating idea in the world: a comedian in a gown leaning against a baby grand without making a joke," Ana Gasteyer says. There are plenty of jokes (and a lot of great singing) on her new holiday album.

It was the elephant in the room. Over 20 years after parodying NPR hosts in her recurring sketch, "The Delicious Dish," former Saturday Night Live cast member Ana Gasteyer sat down for an interview with NPR host Noel King. Although she's equally famous for impressions of Celine Dion and Martha Stewart, the theme of the conversation, like that of the most famous version of that sketch about "Schweddy Balls," was the holidays. Gasteyer recently released a holiday album; it's called Sugar & Booze.

Appreciating her reason for the season — parties — is the running theme.

"There was not a song out there that quite celebrated the season the way that it was meaningful to me," Gasteyer says. "I knew right out of the gate that it was going to be a record celebrating seasonal secular favorites. I'm not a very religious person, but I love a party, and I love jollity and humor and gaiety."

Even though we have a higher threshold for silliness in holiday music, Gasteyer tried to avoid her own pitfalls.

"The root of what I find funny is overearnestness," she says. "It's also the Achilles' heel of anyone who's been driving in another lane and suddenly wants to make music."

Her solution was to lean into cocktail lounge jazz, or what Gasteyer calls "this late '50s/early '60s entertainers' era music" — music from a time in which it was more common for entertainers to mingle across artistic disciplines. But avoiding overearnestness didn't mean she didn't have any fun with it.

On "Secret Santa," Gasteyer duets with her former SNL colleague, Maya Rudolph. "I decided, as I was writing, that it was this woke anthem of this woman who felt obliged to buy her Secret Santa boyfriend a really fancy present, when it occurs to her what a jerk he is," she says of the narrator's Christmas shopping-trip-turned-Cuban-vacation.

"I knew that Maya would like it," Gasteyer continues. "It has this ridiculous retro-Cuban, fun energy to it."

Back to ridiculousness, Noel King just had to ask about that elephant from 20 years ago, because in addition to "Schweddy Balls" just being funny, the joke was that NPR hosts had no sense of humor. King did some research and says, "It really did strike a chord here. People were questioning themselves."

"They always say that imitation is the highest form of flattery," Gasteyer says. So from Celine Dion to Martha Stewart and even to NPR, "Everything I've parodied is stuff I'm interested in."

With that, we'll count Ana Gasteyer among our avid listeners.

Phil Harrell and Steve Mullis produced and edited this interview for broadcast. Cyrena Touros adapted it for the Web.