Accessibility links
Paleo, Mediterranean And More: How To Choose A Diet There are so many food tribes out there — everything from keto to vegan. We help you understand how to choose a diet approach that's right for you. 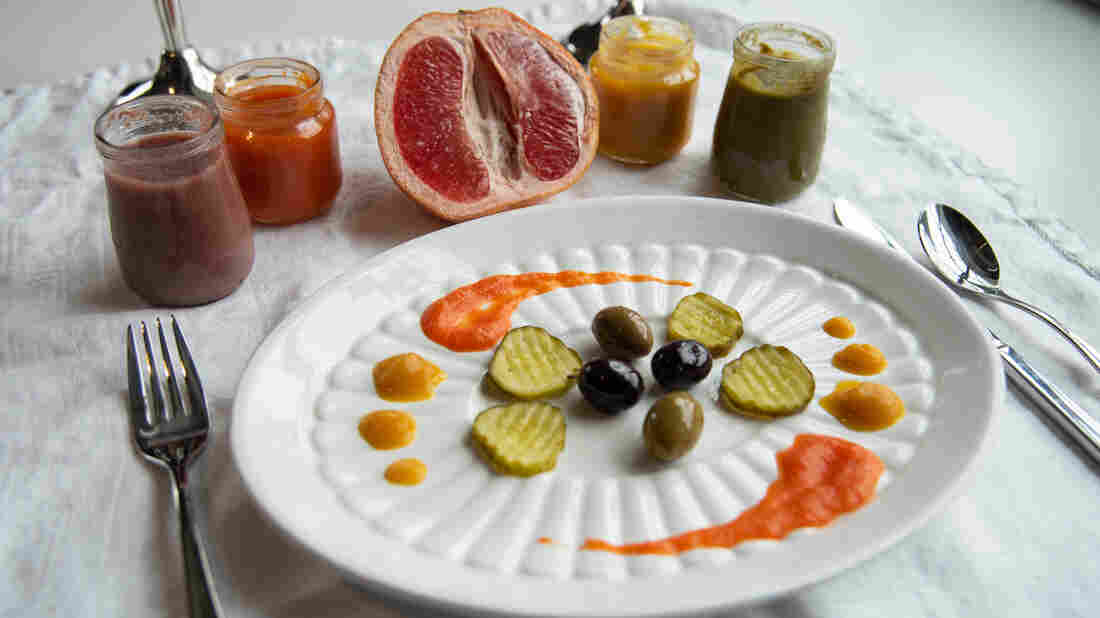 There are a lot of diets out there — the cayenne pepper diet, the baby food diet, that diet where you can only eat grapefruit and eggs. How do you sort through the fads and find a diet that's right (and healthy) for you? Jenna Sterner/NPR hide caption 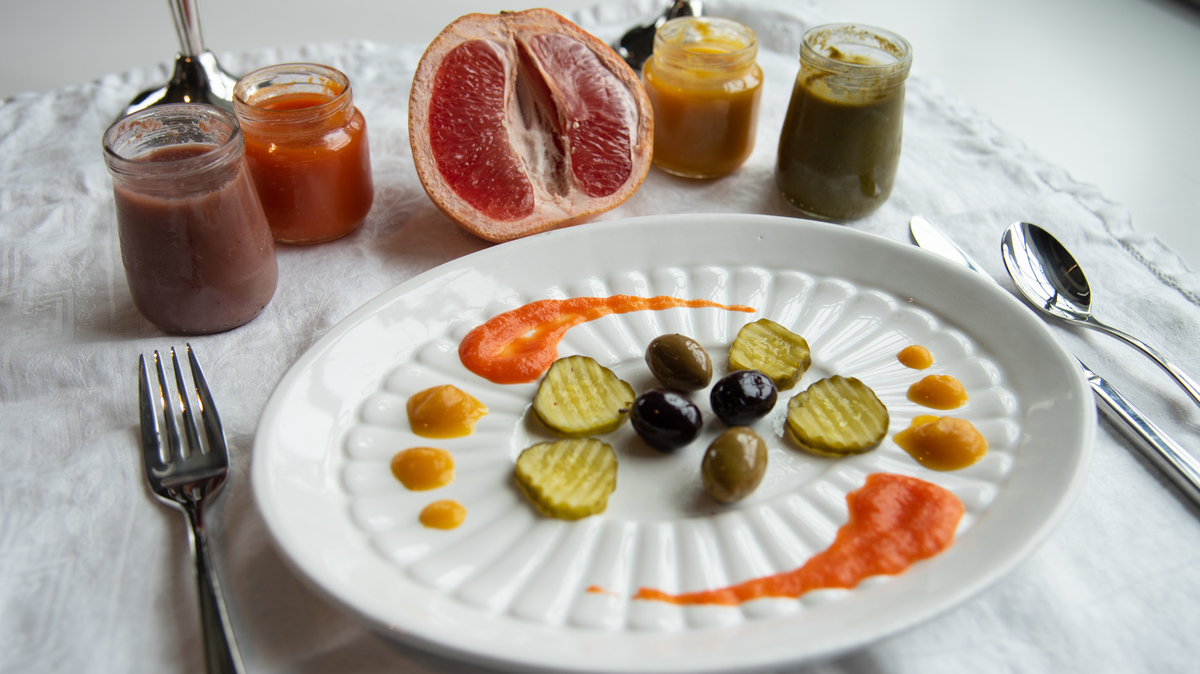 There are a lot of diets out there — the cayenne pepper diet, the baby food diet, that diet where you can only eat grapefruit and eggs. How do you sort through the fads and find a diet that's right (and healthy) for you?

Before we start, here's an important concept to anchor your thinking: All the best diets have a lot in common. They nudge you to eat more fruits, vegetables and lean protein — while at the same time cutting back on refined sugars and packaged foods full of ultra-refined carbs.

Now, on to the tips. David Katz, a preventive health physician and the founding director of Yale University's Yale-Griffin Prevention Research Center, will be our guide. Then we'll discuss a few of the diets ranked most highly by U.S. News & World Report.

1. Pick a diet that's compatible with your life

For a diet to be effective, it's got to be one you can stick with. So before you choose a diet, Katz says ask yourself these questions:

Some popular diets get lower marks in Katz's book because they are difficult to maintain over time.

2. Good diets tend to have a lot in common

Katz says that oftentimes, good diets sound more alike than different. Two of the most highly ranked diets on U.S. News list — the DASH diet and a Mediterranean diet — share a lot of the same building blocks of fruits, veggies and whole grains. They also allow for moderate amounts of eggs, poultry and dairy. Both diets recommend taking it easy on sweets, sugary drinks and red meat.

3. Think about how your diet impacts the planet

If you want to align your eating habits with a healthy planet, think about the environmental footprint of your diet.

"I don't think ... we can talk about diet and health and not factor in the health of the planet," Katz says. Consider this: Beef production uses about 20 times the land and emits 20 times the emissions compared to producing beans, per gram of protein. And, there's a consensus among many health experts around the globe that a diet low in red meat consumption is better for our health — and the planet's health. The EAT-Lancet Commission report recommends less than an ounce a day of red meat, or about a hamburger per week. (The folks at the World Resources Institute have calculated the greenhouse gas emissions associated with producing a gram of edible protein of various foods, from eggs, nuts and soy to poultry and beef.)

And now, for a look at some of the ranked diets from U.S. News:

Some populations with the longest life spans follow a Mediterranean diet, Katz says. He points to so-called blue zones. "There are five blue-zone populations identified to date," Katz says. "These are the people around the world who most routinely live to be 100 and don't get chronic disease," Katz says. Two of these zones are in Mediterranean areas: Ikaria, Greece, and Sardinia, Italy. The diet has been linked to lower rates of breast cancer and heart disease.

Here's how U.S. News describes the Mediterranean pattern of eating: "This diet emphasizes eating fruits, veggies, whole grains, beans, nuts, legumes, olive oil and flavorful herbs and spices, fish and seafood, at least a couple of times a week, and poultry, eggs, cheese and yogurt in moderation, while saving sweets and red meat for special occasions. Top it off with a splash of red wine if you want, and remember to stay physically active and you're set."

Who might this diet be good for? If you don't want to count calories and your goal is overall good health, you may want to give the Mediterranean diet a try. But make sure you buy good olive oil. Here's a hint: To get the freshest olive oil, look for a harvest date on the bottle.

The DASH diet, which stands for Dietary Approaches to Stop Hypertension, is promoted by the National Heart, Lung, and Blood Institute to do exactly that — prevent high blood pressure. It's not a sexy sounding diet, but it's tried and true — and routinely ranks as a best diet for health.

It emphasizes the food you've always been told to eat — fruits, veggies, whole grains, lean protein and low-fat dairy, which are high in blood pressure-deflating nutrients such as potassium, calcium, protein and fiber. And, of course, it recommends cutting back on sodium.

As we've reported, there's a lot of evidence pointing to the benefits of this pattern of eating — everything from weight loss, protection against heart disease and certain cancers, as well as diabetes prevention.

The keto diet emphasizes weight loss through burning fat. The goal is to quickly lose weight and ultimately feel better with fewer cravings while boosting your mood, mental focus and energy. It's an ultra low-carb diet.

"It tends to be a very low-fiber diet," Katz says. "That's bad for the gastrointestinal tract," Katz says, so he's not a big fan. The keto diet has come in last place in some of the U.S. News rankings because experts say it can be extreme and hard to stick to. Though, for people who do stick to it, it can lead to significant and fast weight loss. Why? When you deprive your body of carbohydrates, you begin to burn fat as a fuel source.

For Katz, losing weight shouldn't always be the main goal. "I think much of the focus, sadly, is still on losing weight. And all too often, it's on losing weight fast," he says. He prefers diets that people can stick to over their lifetime — not crash diets. And the most important goal is optimal health — not trying to become a size 2 — if that's not your body type.

Another knock on keto is that it can be hard on the environment. People who are on the keto diet tend to eat a lot of meat. He says the same goes for the paleo diet.

An alternative to keto is intermittent fasting. There's preliminary, new evidence that simply limiting your eating window to 10 hours a day (think 9 a.m. to 7 p.m.) can help nudge your body into low-grade ketosis, which can help burn fat.

The thought behind the paleo diet is, if the cavemen didn't eat it, you shouldn't either. So you'll say goodbye to refined sugar, dairy, legumes and grains and hello to meat, fish, poultry, fruits and veggies.

Katz says this diet is "hard to practice because everything that cavemen ate is extinct. ... The best you can do is approximate it." He also says paleo can be used, "as an excuse to eat bacon, pepperoni and hamburgers."

When It Came To Food, Neanderthals Weren't Exactly Picky Eaters

The vegan diet is basically a vegetarian diet with no animal products, so no eggs, cheese or other dairy.

Katz says there's often a fear that those who follow vegan diets may lack protein, but he says it's mostly an urban legend. "A well-balanced vegan diet readily provides all of the protein that we need." And it's healthy for the planet. Registered dietitians often recommend a B-12 supplement or other multivitamin for people following a vegan diet.

The plant-based Ornish diet gets top marks. It was developed by Dean Ornish a physician and professor at UC San Francisco. The diet is also low in refined carbs and fat. In his book Spectrum, Ornish describes a range of healthy lifestyle choices, including exercise, yoga and meditation for stress management, as part of his overall wellness plan.

Katz says the Ornish diet is best known for actually reversing heart disease. The diet has been shown to reduce plaque in the coronary arteries and improve other measures linked to cardiovascular health in people who are at high risk of heart disease — or already have it.

Can Healthy Eating Reverse Some Cancers?

According to U.S. News, "Weight Watchers assigns every food and beverage a point value based on its nutrition. The things you know you should eat, like fruits and vegetables, are zero points. Those foods help lay a foundation for a healthier pattern of eating. And there's a low risk for overeating them."

The Weight Watchers diet program is known for group meetings and weigh-ins. It tends to rank well because it gives you rules about what to eat and motivation to stick with it. "As soon as you impose any rules, you're better off in terms of weight, at least, and generally in terms of health, too," Katz says. "So these are approaches that basically put training wheels on the bike."

This story was originally published on Jan. 21, 2019. The audio portion of the episode was produced by Chloee Weiner.