Accessibility links
'Ring Of Fire' Eclipse Sweeps Across Skies In Middle East And Southeast Asia Instead of the sun's full disk of fire, or a crescent of light, viewers in areas of complete annularity saw a fiery halo around the moon. 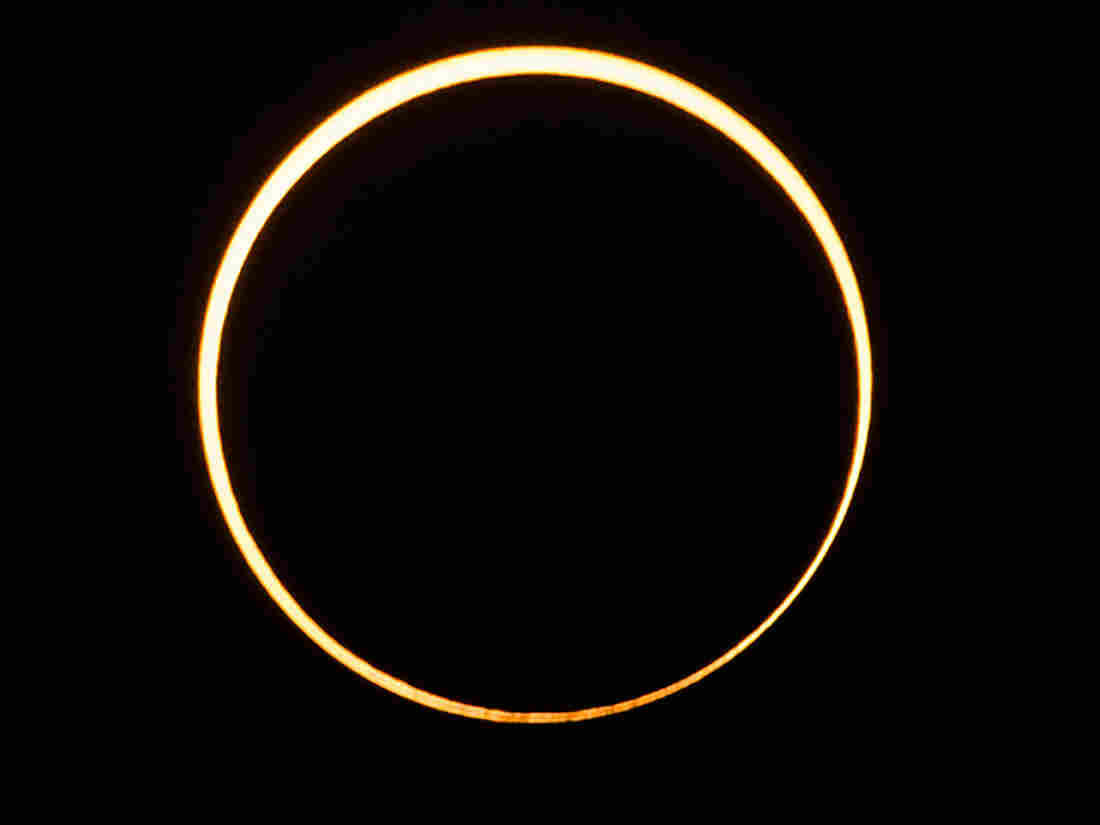 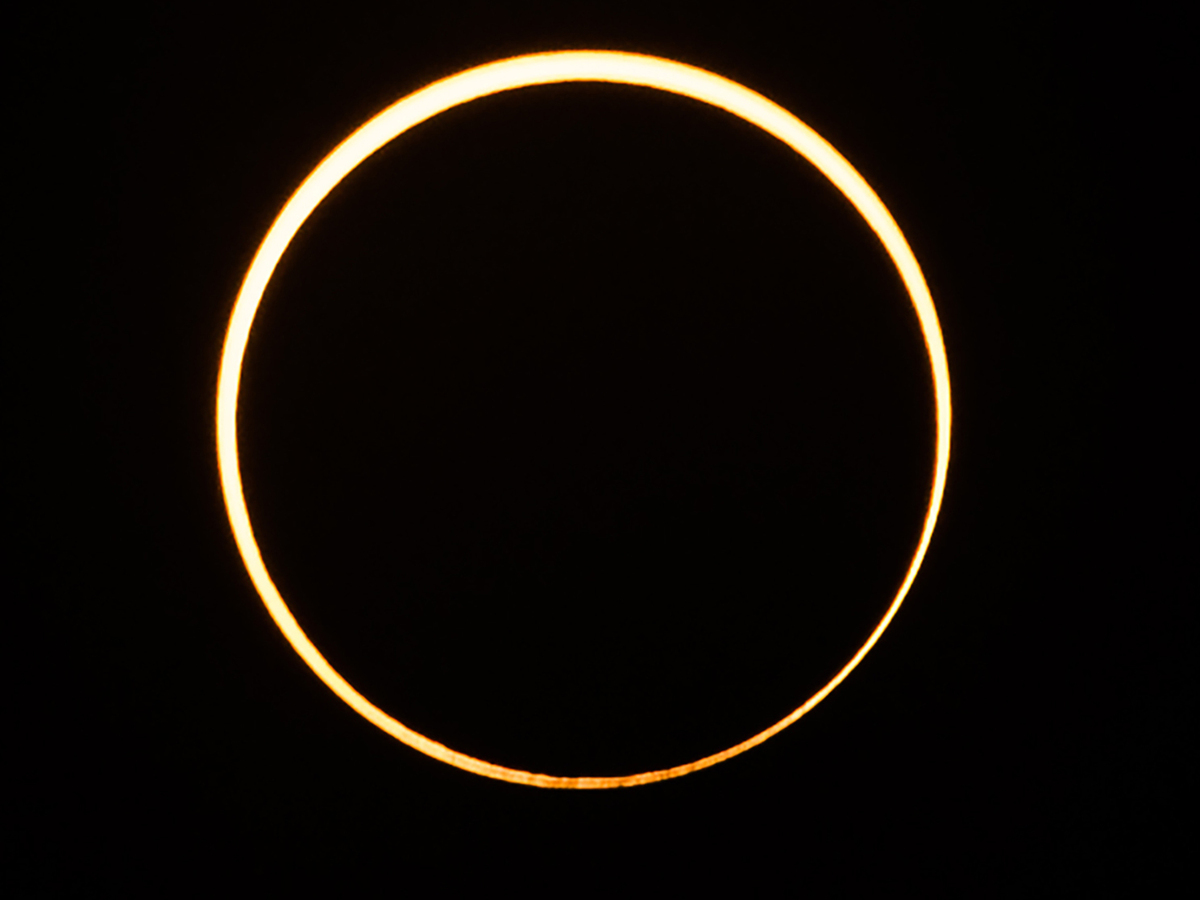 The moon moves in front of the sun in a rare "ring of fire" annular solar eclipse, as seen in the sky over Singapore on Thursday.

From the Middle East to Southeast Asia, people looked skyward for a chance to see an annular eclipse on Thursday, as the unusual celestial event took place over a long but thin band of the world. The striking "ring of fire" phenomenon — with the moon blotting out all but a sliver of the sun — began in Saudi Arabia and ended northeast of Guam in the Pacific Ocean.

An annular eclipse occurs when the moon is too far away from Earth to block the entire sun during an eclipse. Instead of the sun's full bright disk, or a crescent of light, viewers in areas of complete annularity see a fiery halo around the moon.

The event began in the early morning hours — in Oman, dramatic images showed the sun being obscured as it rose above the Gulf of Oman. Photographers captured similar scenes across the Middle East and in India.

By the time the eclipse began happening farther east, the sun was higher in the sky, and millions of people used protective eyewear to watch the moon partially blot out the sun.

People outside of the roughly 73-mile-wide central path were still able to see at least a partial solar eclipse if their skies were clear. But even through light clouds, the bright halo effect was striking.

We have an annular eclipse happening in Singapore right now! ☀️🌑 pic.twitter.com/sriURBcIcv

From Saudi Arabia, the annular eclipse dipped to the southeast, passing over Oman, southern India and Sri Lanka. As it crossed over Singapore and Indonesia, the eclipse began curving to the northeast, over the Northern Mariana Islands.

At the point of its greatest duration over Singapore and Indonesia, the eclipse obscured more than 90% of the sun and lasted more than three minutes. 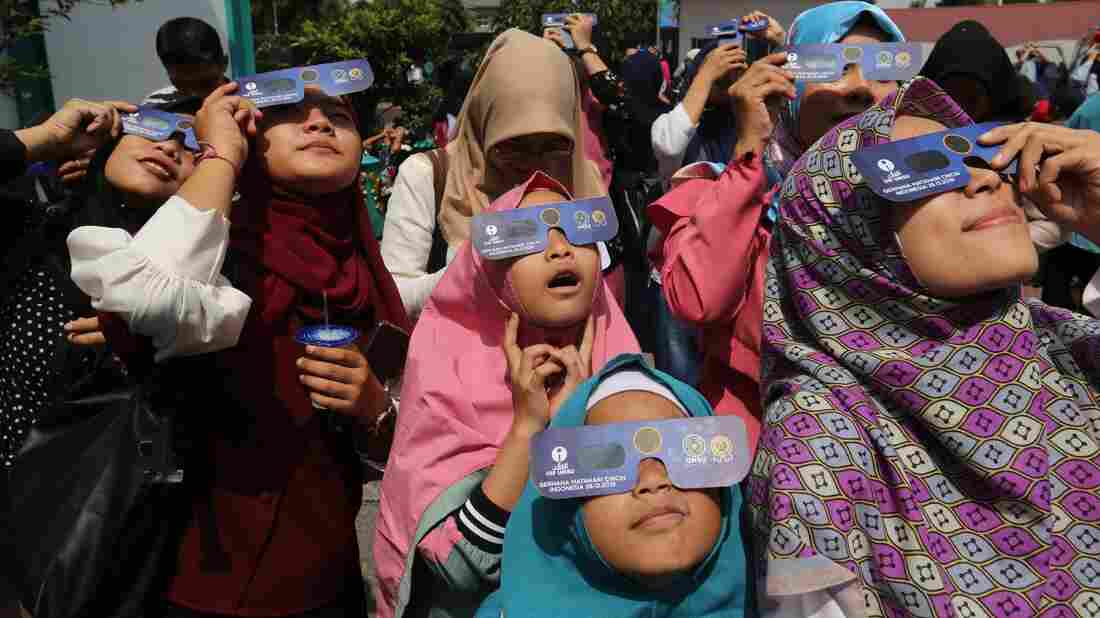 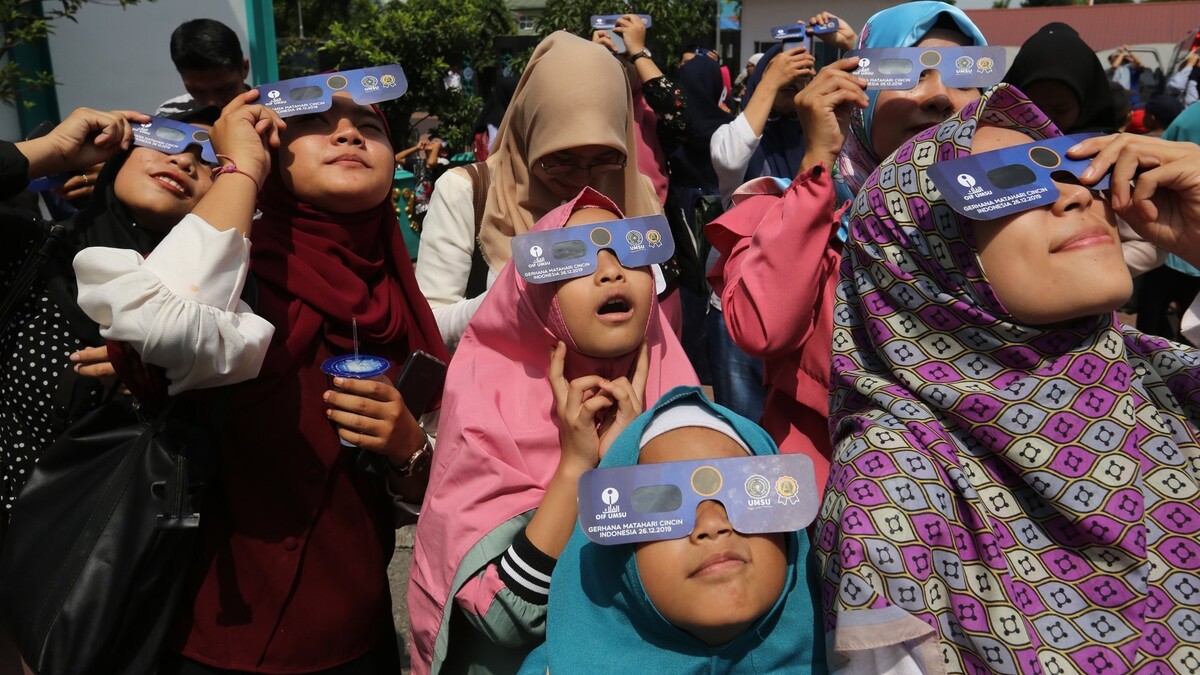 From its start in the Middle East to its finish over the ocean, the entire phenomenon lasted for roughly 3 1/2 hours.

In southern India, the dazzling eclipse had set off widespread anticipation — and some worries. As NPR's Sushmita Pathak reports from Mumbai for our Newscast unit:

"One Indian state announced a public holiday and many Hindu temples across the country were closed. Some faithful believe an eclipse is a bad omen and advise against eating or going out when it's happening. To counter superstitions, one pro-science group in the southern Indian city of Bengaluru gathered on the steps of the city's town hall for breakfast during the eclipse."

An #Annular, or #RingOfFire, #SolarEclipse occurred today, which lasted 3 min and 40 sec. It was visible from most of #Asia & the western Pacific. Our sister office in Guam, captured this photo at approximately 4:46PM ChST. Shot with a red, hydrogen alpha filter. pic.twitter.com/qVHoLBTTs8

Explaining the celestial mechanics behind Thursday's eclipse – and how it got its name — NPR's Joe Palca says:

"If the moon's orbit were perfectly circular ... all eclipses would be the same ... but the moon's obit is elliptical, meaning sometimes it's farther away from Earth than other times.

"When the moon is farther away, it appears smaller in the sky. That also means that when it passes in front of the sun, it doesn't completely obscure the disk of the sun. Instead, a bright ring appears where the sun's light peeks out around the moon. That ring is called an annulus, hence the name annular eclipse."

The next annular eclipse will occur on June 21, 2020, taking place in skies over central Africa, southeast Asia and China, according to NASA. But that phenomenon will be very short, with the full effect lasting less than a minute. The second eclipse that's predicted for 2020 will take place at the end of the year, and it will be visible only in South America and Antarctica.