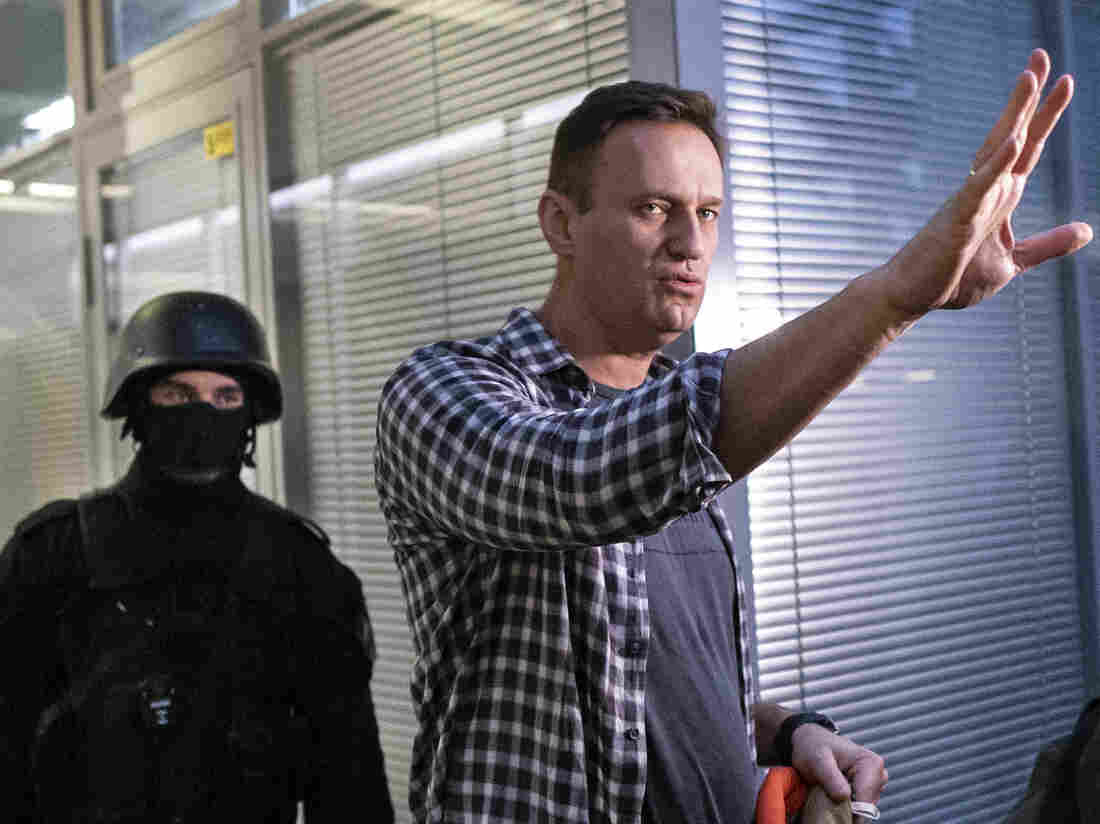 Russian opposition leader Alexei Navalny gestures while speaking to the media as a security officer guards an entrance of the Anti-Corruption Foundation office in Moscow, Russia, Thursday. The federal court bailiffs' service that conducted the Thursday raid later said he had not been detained. Alexander Zemlianichenko/AP hide caption 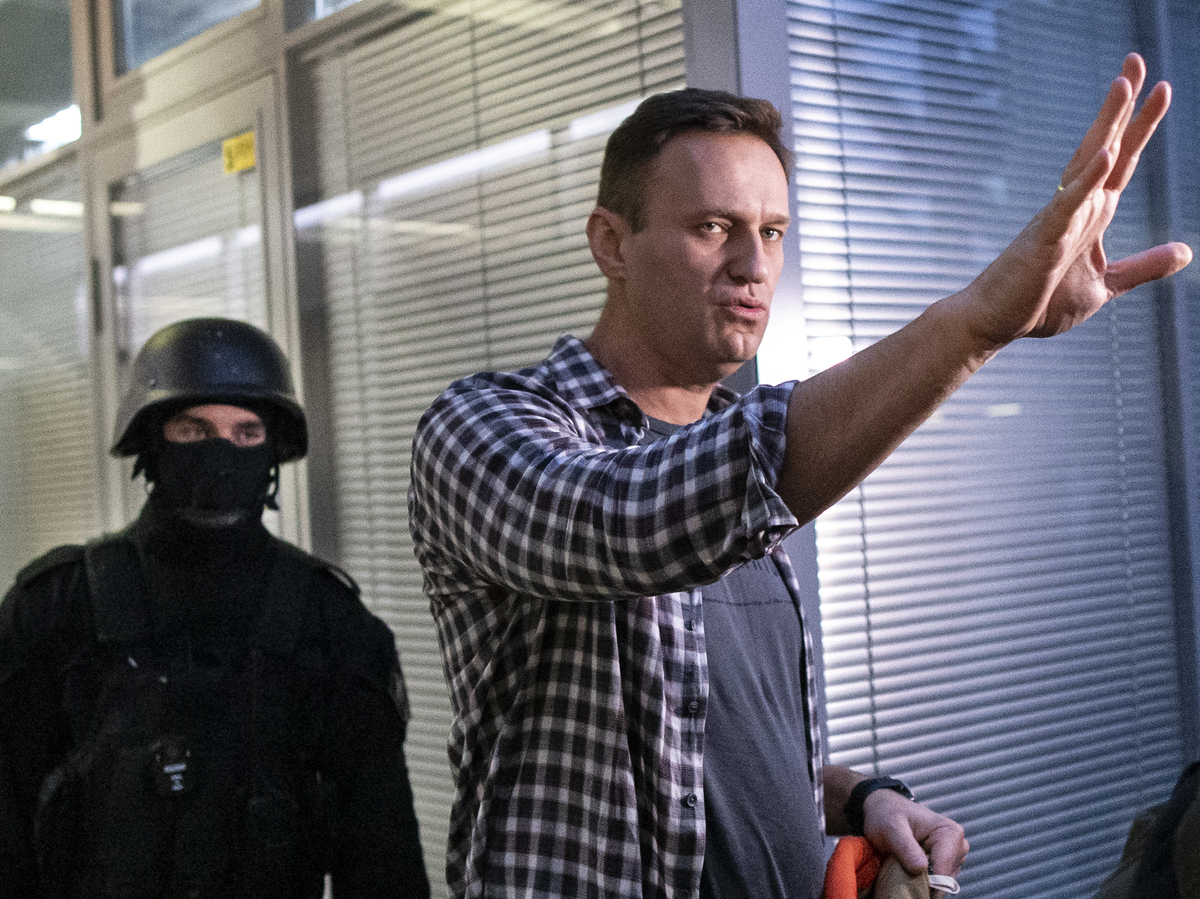 Russian opposition leader Alexei Navalny gestures while speaking to the media as a security officer guards an entrance of the Anti-Corruption Foundation office in Moscow, Russia, Thursday. The federal court bailiffs' service that conducted the Thursday raid later said he had not been detained.

The offices of Russia's most prominent opposition leader, Alexei Navalny, have been raided by security forces in Moscow.

Video of the Thursday raid posted online shows a shower of fiery sparks as the door to Navalny's Anti-Corruption Foundation office is forced open with power tools.

As NPR reported, once inside officers in face masks ordered the staff to stand against a wall while they confiscated office and broadcasting equipment.

"With each search, more and more is being taken out of our studio," Navalny wrote in a tweet following the sweep. In addition to a computer, he said officials seized "monitors, tripods, a mixer and a server room."

Navalny said he was dragged out of the office but he was not detained. He added that it is the fourth time security forces have descended on the office since August.

Photos posted to social media by Navalny show the office was left in disarray.

The anti-corruption activist and host of a popular online investigative YouTube channel said the latest raid was carried out by the Federal Bailiffs Service (FSSP) and is connected to the refusal to delete a video from the Internet originally posted in March 2017.

According to that report:

"The head of the ruling United Russia Party [Medvedev] owns real estate throughout the country, he owns huge tracts of land in the most elite areas, he manages yachts, apartments in old mansions, agricultural complexes and wineries in Russia and abroad," Navalny wrote. "All this property was acquired on the bribes of the oligarchs and loans from state banks."

Medvedev has adamantly denied the allegations levied by Navalny.

A court ordered Navalny to remove the video from the internet after Medvedev won a libel lawsuit. But it remains on YouTube in defiance of the ruling. And on Thursday he vowed once again not to take it down.

The Federal Bailiffs Service said investigations were "being carried out by the directorate of the FSSP in the Anti-Corruption Foundation as part of a criminal investigation," according to the BBC.

The 43-year-old lawyer has been one of the loudest and most visible critics of President Vladimir Putin's government. In 2018, Navalny attempted to run for president but was barred from doing so after a Russian court convicted him of embezzlement.

He routinely posts videos on his YouTube channel seeking to expose graft and corruption. That has earned him a large following on social media — the Medvedev video has been viewed nearly 33 million times.

Another video, lobbing corruption charges against Denis Popov, who was recently appointed as Moscow's chief prosecutor by Putin, garnered almost 2.5 million views in its first three days on YouTube.

NPR's Lucian Kim reported that state-run media in Russia have been prohibited from speaking Navalny's name on the air.

An abduction from Moscow to the Russian Arctic

"His phone was switched off by his mobile operator and the police came to his apartment and took him away," Kim told Here & Now.

Shaveddinov eventually turned up about 1,000 miles away from his home on a restricted island in the Arctic Ocean where there is a Russian military base. Kim said the 23-year-old was drafted into the army.

Navalny has accused the government of kidnapping and says that Shaveddinov's forced conscription is illegal imprisonment.

"They really believe and have once again demonstrated that the army and the prison are one and the same," Navalny tweeted. "They equated the army with a peripheral pre-trial detention center."

For several months, the Anti-Corruption Foundation has been the subject of a money laundering investigation.

The criminal case was opened in August after Navalny called for people to participate in anti-government demonstrations protesting the exclusion of opposition candidates from local elections.

The foundation has also been branded a "foreign agent" by the government, which means its office is subject to surprise inspections.

But Navalny has vowed to continue holding Putin's government to account.