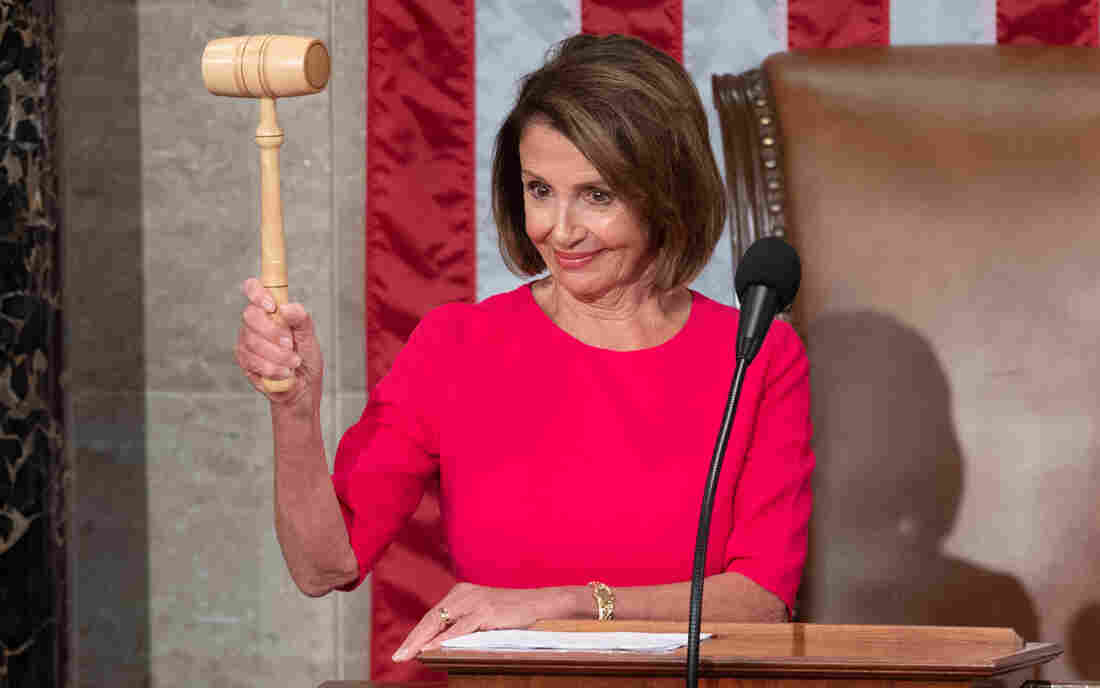 House Speaker Nancy Pelosi holds her gavel after being elected during the beginning of the 116th Congress. A lot of Pelosi's decisions have come to define 2019. Saul Loeb/AFP via Getty Images hide caption 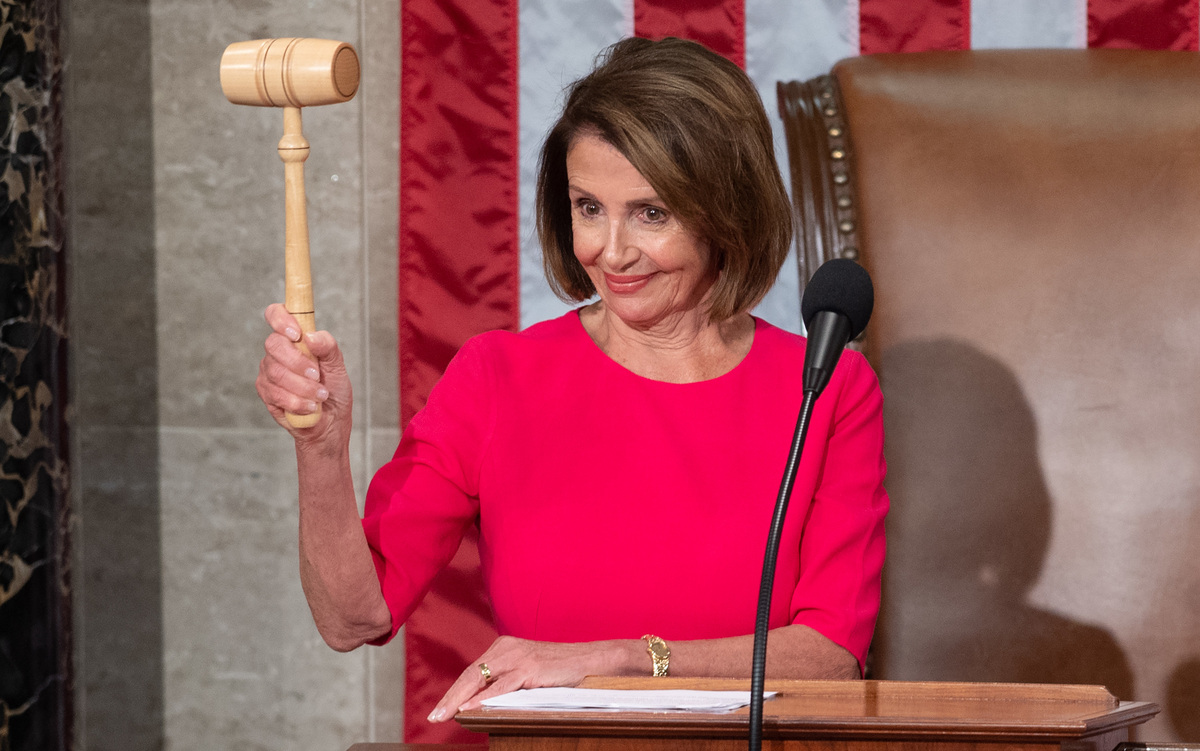 House Speaker Nancy Pelosi holds her gavel after being elected during the beginning of the 116th Congress. A lot of Pelosi's decisions have come to define 2019.

An overarching and important theme of 2019 was the shifting power dynamic in Washington. The 2018 midterm elections put Democrats in control of the House of Representatives after eight years of Republican control — and made Nancy Pelosi House speaker for the second time in her career.

That had consequences, including the use of the ultimate check on presidential authority, impeachment.

Many of this year's most-read political stories on NPR.org centered on what the newly minted majority Democrats would do and how they'd use their power.

Other major stories of the year include the release of Robert Mueller's report on Russian interference in the 2016 election and the Democratic presidential primary race kicking into high gear.

Stories that just missed the top 10 covered Justice Ruth Bader Ginsburg's health, the early 2019 government shutdown, whether President Trump's tax returns would have to be released, several on the Ukraine affair that led to Trump's impeachment and Trump's Hurricane Dorian Sharpie moment.

Here are the headlines that did make the cut:

After Hillary Clinton lost in 2016 despite winning the popular vote by some 3 million votes, additional states have pushed for legislation to essentially eliminate the Electoral College.

That isn't likely to happen anytime soon because of states controlled by Republicans, but it's proof of just how much Democrats are smarting since 2000. In two of the three presidential elections that Democrats lost this century, they won the popular vote.

Americans appear conflicted. A Pew Research Center poll last year found that 55% want the Constitution amended so the candidate who receives the most votes wins. But a July NPR/PBS NewsHour/Marist poll found just 42% of Americans thought eliminating the Electoral College was a good idea.

9. Ted Cruz And Alexandria Ocasio-Cortez Team Up To Ban Lawmakers From Lobbying

Twitter is not normally a place where people with polarized views find consensus. But it was the platform where it started for two of the most outspoken politicians of this era — liberal Democratic Rep. Alexandria Ocasio-Cortez of New York and conservative Republican Sen. Ted Cruz of Texas.

The duo teamed up on legislation that would impose a lifetime ban on members of Congress becoming lobbyists. Not everyone thinks that's such a great idea, because there could be unintended consequences.

No ban has passed since this story got attention. In June, Rep. David Cicilline of Rhode Island introduced a bill prohibiting members of Congress from lobbying. But it only had one cosponsor and it went nowhere. As of August, Ocasio-Cortez said her legislative team was in discussion with Cruz's.

Trump used his first Oval Office address to try and make the sale on his desired border wall along the U.S.-Mexico border.

NPR fact-checked six of the claims the president made, including that his rhetoric overstates the criminal threat of immigrants and that most of the illegal drugs entering the country go through legal ports of entry that a border wall would not stop.

Trump also said the wall would be paid for "indirectly" by the U.S.-Mexico-Canada trade agreement. That's a far cry from his original campaign claim that Mexico would pay for a wall — the country isn't. 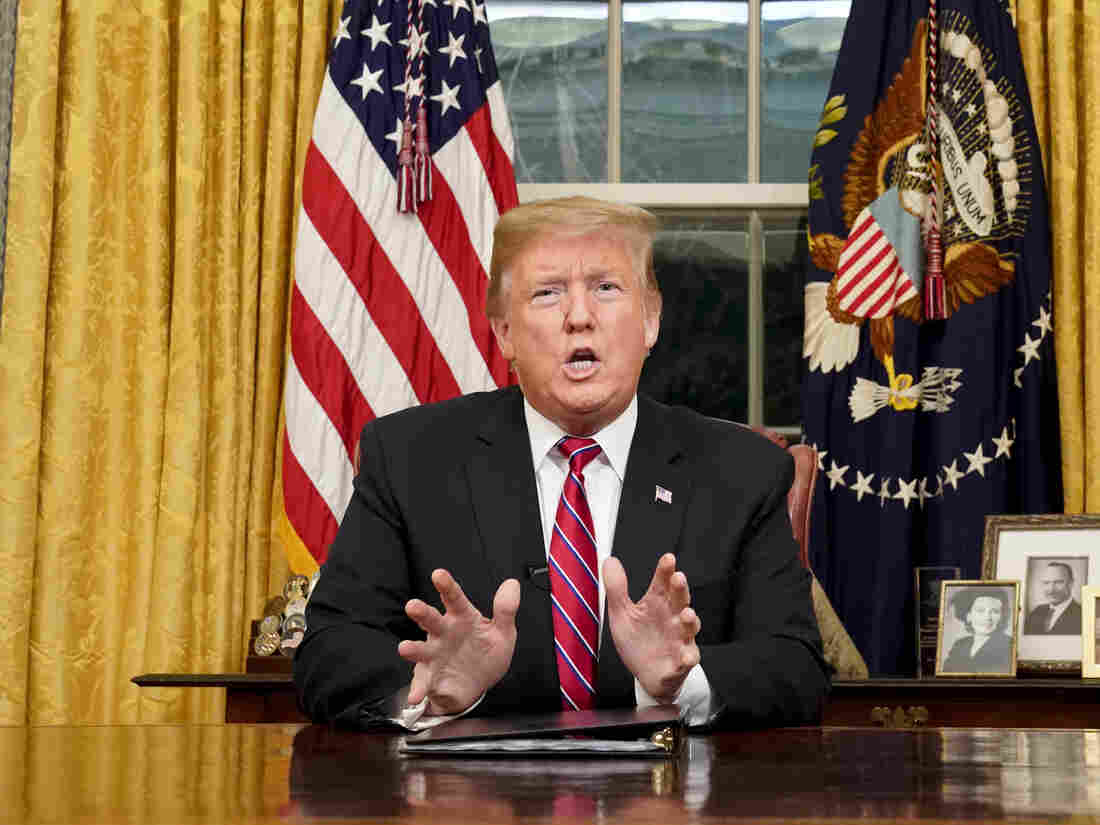 President Trump speaks during an address on border security in the Oval Office on Jan. 8. Carlos Barria/Bloomberg via Getty Images hide caption 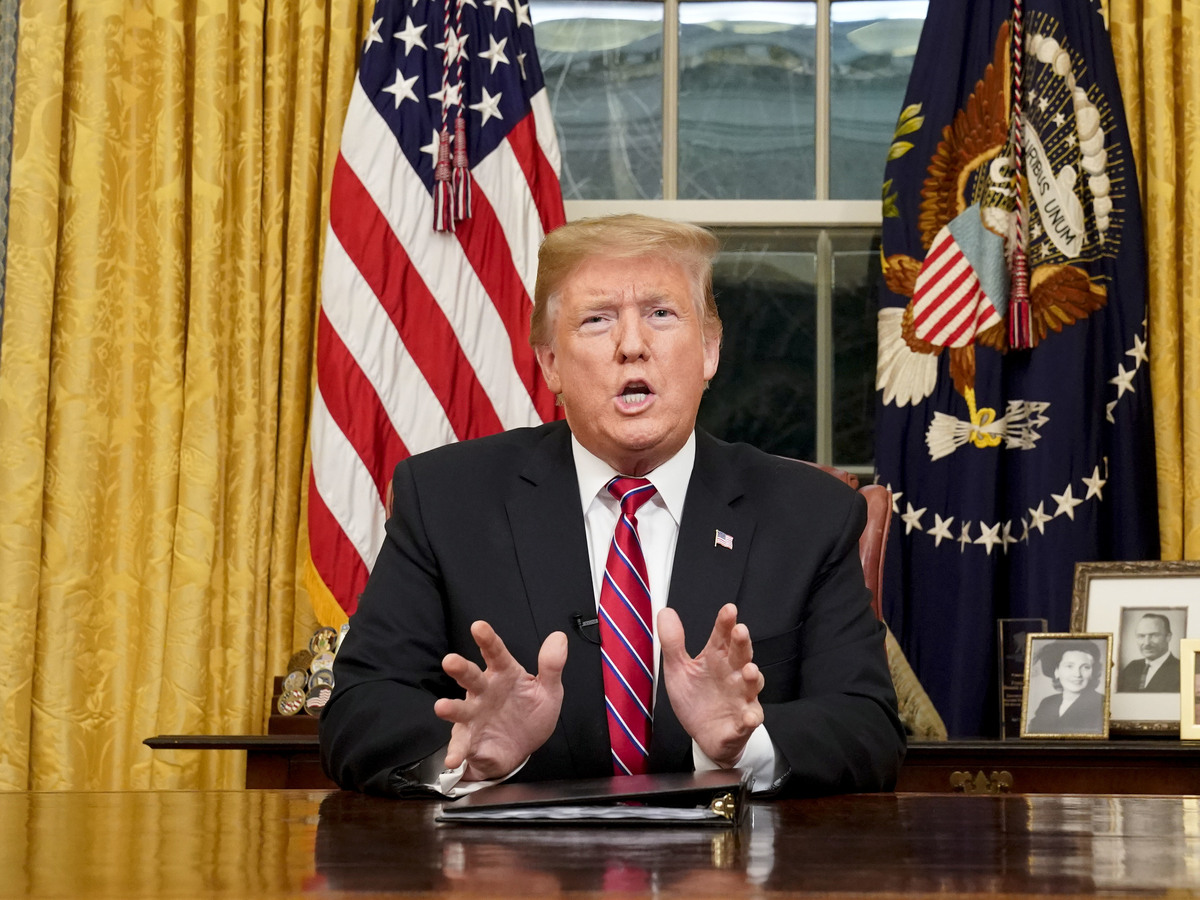 President Trump speaks during an address on border security in the Oval Office on Jan. 8.

7. Poll: Trump Approval Down, Slips With Base

During the record-long partial government shutdown in January, Trump's approval rating fell to 39% in the NPR/PBS NewsHour/Marist poll.

That time saw him with his lowest average score for the year. His approval rating has since recovered slightly, up to about 45% in the average of the polls and 42% in the most recent NPR poll.

With Democrats' takeover of the House in early 2019, it meant not just the dawning of a check on Trump but also a new way of doing business after eight years of GOP control.

A lot of what Democrats implemented was in response to the tense intra- and inter-party fighting of the Boehner years. When Republican John Boehner was speaker, he faced a debt-ceiling crisis because conservative hard-liners looked to force spending cuts. Pelosi moved to make debt-ceiling raises automatic.

She also created a committee to address climate change, revived a rule to give lawmakers 72 hours to read major legislation before they can vote and amended rules on discrimination to allow religious headwear to be worn in the House chamber.

And looking to avoid the coup attempts faced by Boehner, she made it tougher to oust a sitting speaker. Pelosi's tight grip on her caucus would show again in the push to impeach Trump. Just two Democrats — one of whom switched to become a Republican — defied Pelosi and voted against the most significant article of impeachment against Trump, abuse of power.

5. Where Does Illegal Immigration Mostly Occur? Here's What The Data Tell Us

The issue of illegal immigration has been dominated by talk of migrants coming across the nation's southernmost border because of Trump's campaign for a border wall.

But the reality is that most people in the United States illegally didn't cross the border; they came legally and didn't leave.

4. READ: The Mueller Report, With Redactions

The Mueller report on Russian interference in the 2016 election was arguably the most anticipated document of 2019.

That 400-page report noted that while the Justice Department's guidance is not to indict a sitting president, the findings did not "exonerate" Trump.

"The evidence we obtained about the President's actions and intent presents difficult issues that prevent us from conclusively determining that no criminal conduct occurred," the report noted. "Accordingly, while this report does not conclude that the President committed a crime, it also does not exonerate him." 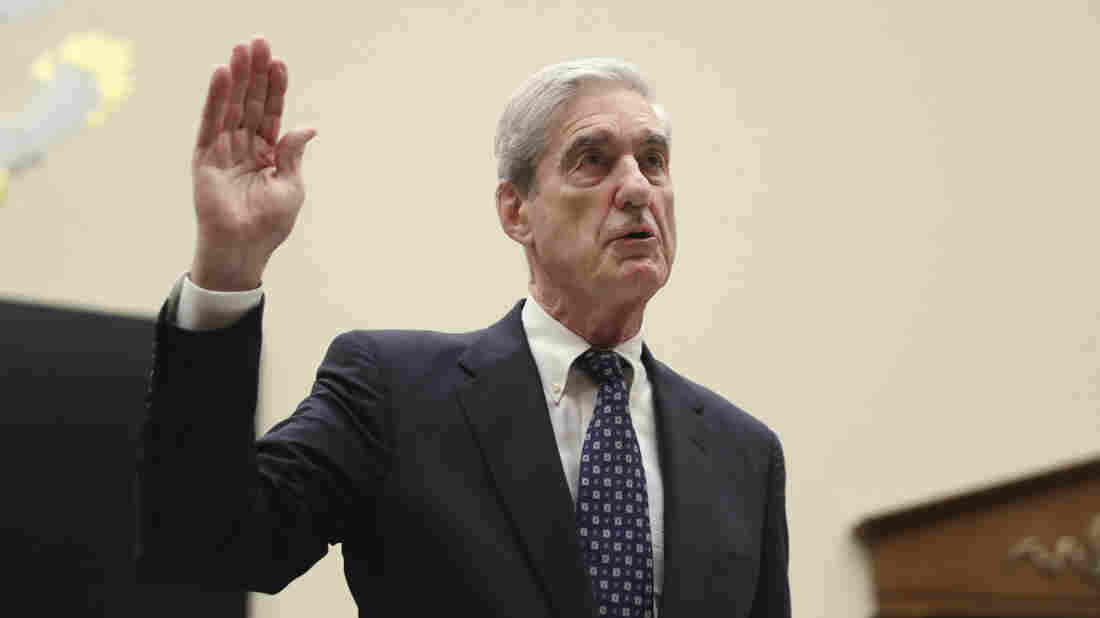 Former FBI Director Robert Mueller is sworn in before he testifies before the House Judiciary Committee on his report on Russian election interference in July. Andrew Harnik/AP hide caption 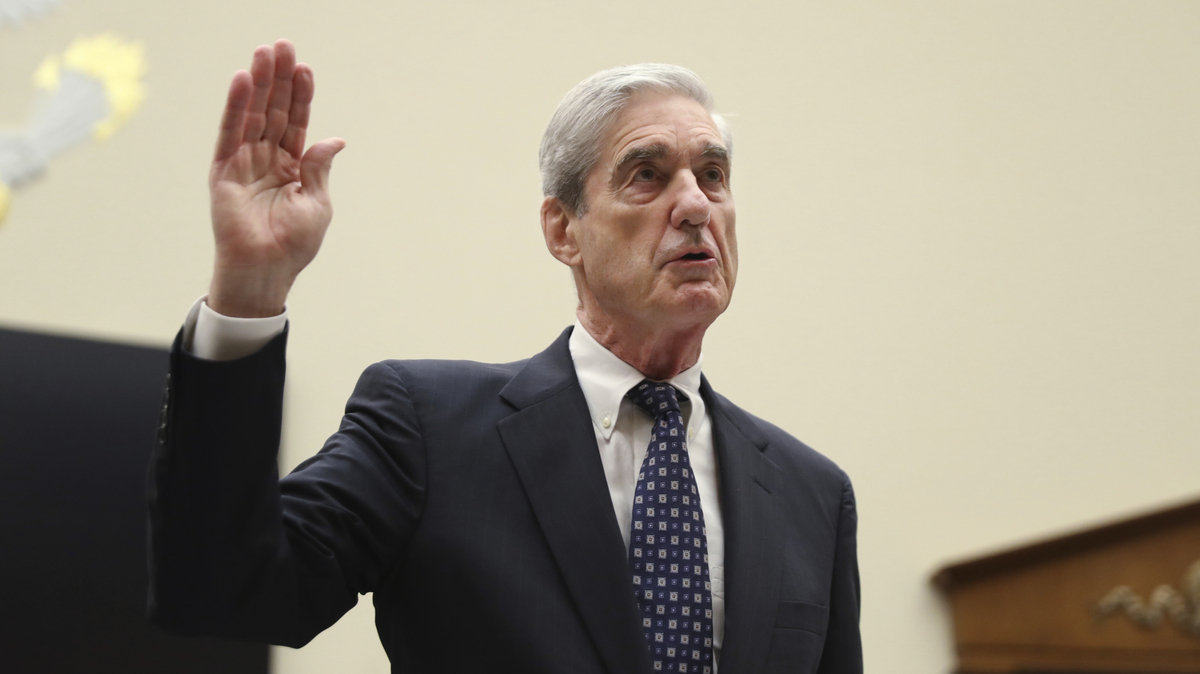 Former FBI Director Robert Mueller is sworn in before he testifies before the House Judiciary Committee on his report on Russian election interference in July.

"[T]he Constitution requires a process other than the criminal justice system to formally accuse a sitting president of wrongdoing," Mueller said in a news conference, a month after his report was released.

This was Trump's first State of the Union address after the Democrats' takeover of the House. But rather than graciously acknowledge the new power dynamic in Washington, like past presidents have, Trump jumped right in.

He touted an "unprecedented economic boom" (it's not), wages that are "rising at the fastest pace in decades" (they aren't) and took credit for unleashing "a revolution in American energy," making the U.S. "now the No. 1 producer of oil and natural gas anywhere in the world" (even though the record fracking expansion predates his time in office).

Trump also warned, "If there is going to be peace and legislation, there cannot be war and investigation."

Obviously, that threat did not stop Democrats from impeaching him. 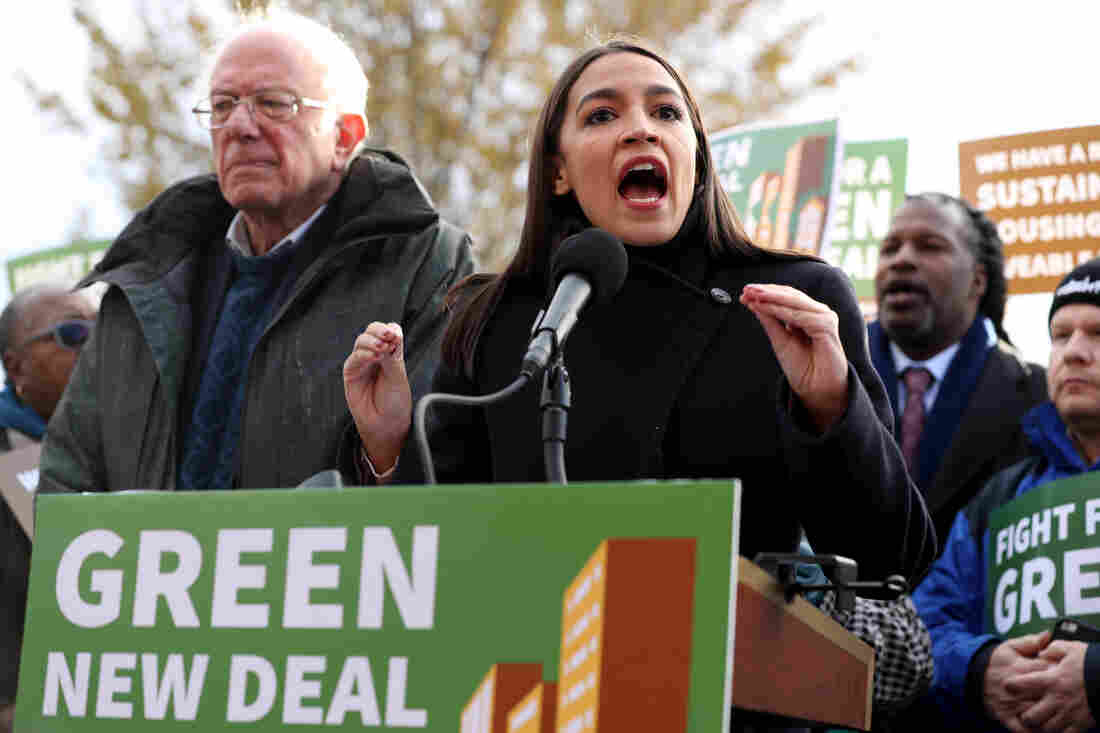 Rep. Alexandria Ocasio-Cortez was one of the breakout figures of the 2018 election. Chip Somodevilla/Getty Images hide caption 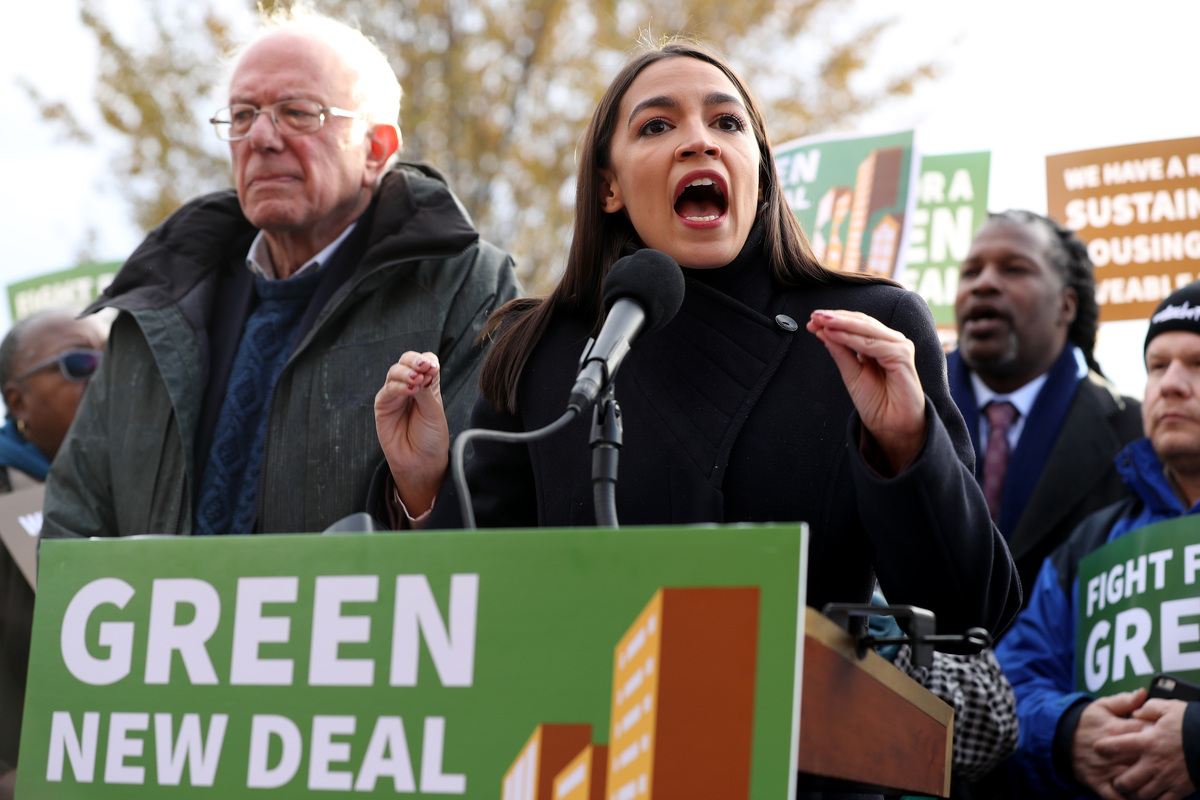 Rep. Alexandria Ocasio-Cortez was one of the breakout figures of the 2018 election.

Ocasio-Cortez was one of the breakout figures of the 2018 election. She ran as an unabashed and uncompromising progressive who stood for the opposite of Trump.

The Green New Deal — as described by NPR's Danielle Kurtzleben — is "a massive policy package that would remake the U.S. economy and, [Ocasio-Cortez and Markey] hope, eliminate all U.S. carbon emissions. That's a really big — potentially impossibly big — undertaking."

Support for the proposal became something of a litmus test for progressives, but its boldness also made it a lightning rod that conservatives have used to target Democrats.

This story highlighted the newfound power of House Democrats.

As a sign of the close relationship between Republican former Speaker Paul Ryan and Vice President Pence, a former congressman from Indiana, Ryan set aside office space for Pence on the House side.

But soon after Pelosi was sworn in, she reversed that.

Vice presidents generally maintain an office on Capitol Hill on the Senate side, given their role technically as president of the Senate. If there's a tie in the Senate, the vice president breaks it.

Pence, in fact, has so far been called on to break ties 13 times during the Trump administration, including on the nomination of Education Secretary Betsy DeVos, to begin debate on repealing the health care law and on a bill to give states permission to withhold federal family planning funds from Planned Parenthood.

Life in the minority in the House is tough. The majority rules — and makes them, and this showed that in a very tangible way.