Accessibility links
From A Hashtag To A Movement: #NatSecGirlSquad Empowers Women In National Security #NatSecGirlSquad is focused on placing and promoting women in national security, a field that's overwhelmingly white and male. "We don't want anything special. We just want equal footing."

From A Hashtag To A Movement: #NatSecGirlSquad Empowers Women In National Security

From A Hashtag To A Movement: #NatSecGirlSquad Empowers Women In National Security 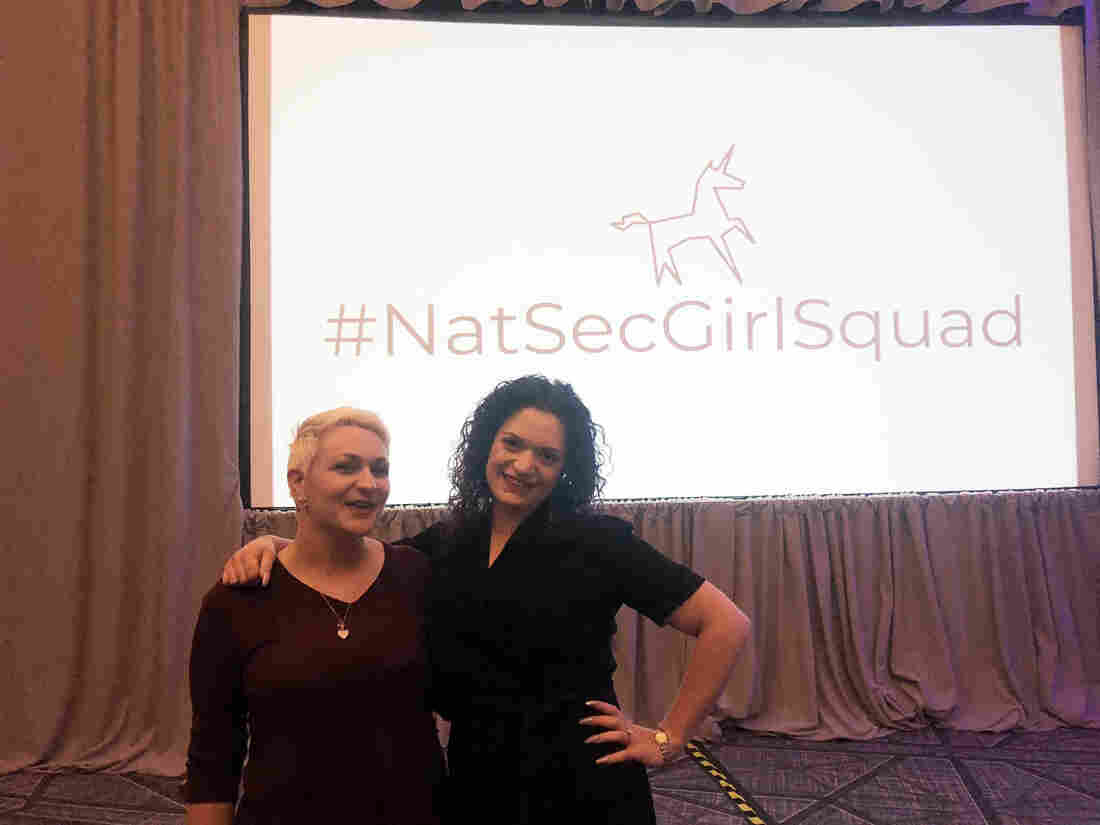 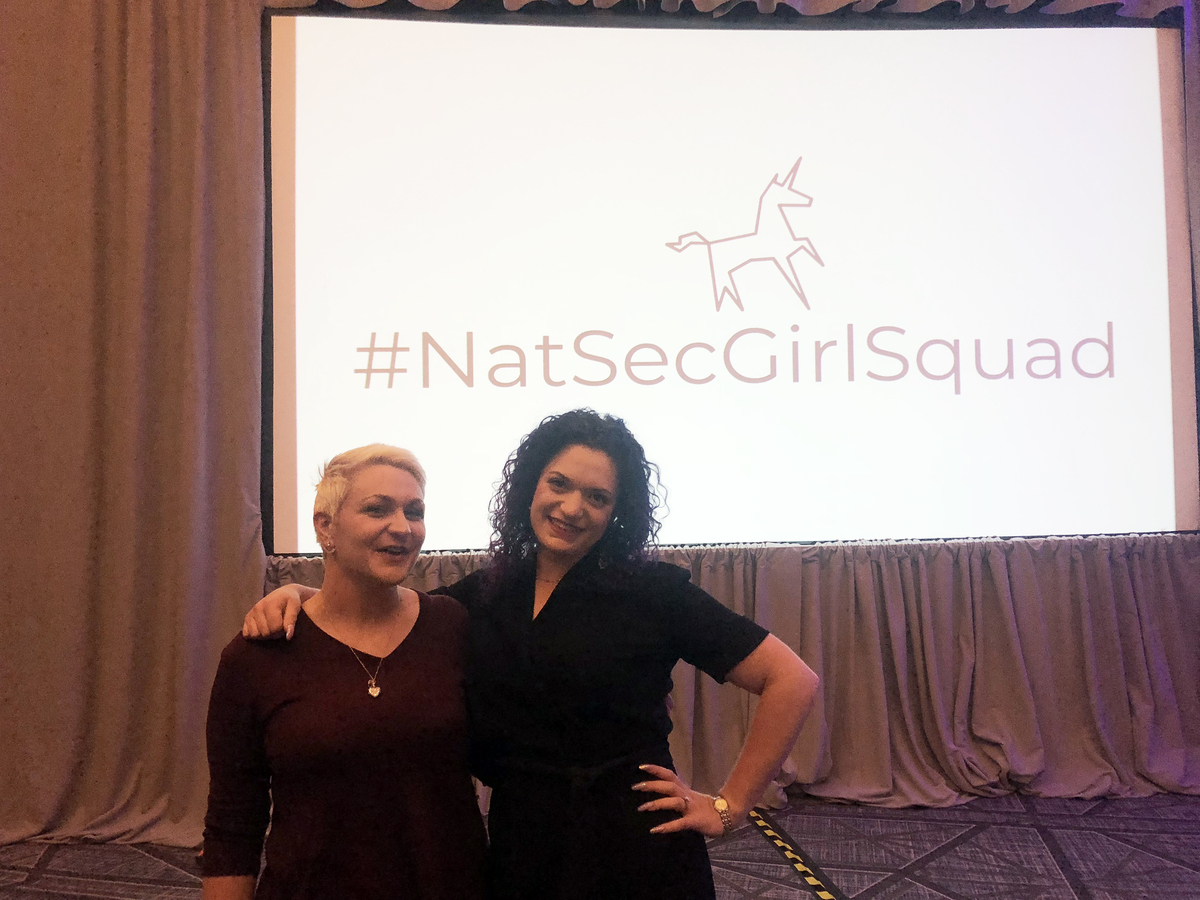 Dozens of national security specialists clustered inside a Washington hotel on a chilly December morning, warming up with coffee and checking out booths set up by intelligence agencies and defense contractors.

There were clues that the target audience for this event was a little broader than the usual D.C. security crowd: The unicorn logo behind the podium. A pop-up shop selling workplace fashion. Free child care. Talk of a line at the women's restroom.

Volunteers wore matching bomber jackets with purple embroidery spelling out the name of the conference's organizer, #NatSecGirlSquad. It's a network focused on placing and promoting women in national security, a field that's overwhelmingly white and male.

"Nobody at #NatSecGirlSquad is looking to get more than they are owed, but we certainly want what is ours," Maggie Feldman-Piltch, the group's founder and director, told the audience. "We're damn good at what we do; we don't want anything special. We just want equal footing."

The squad is part of a broader movement of women-focused security and defense groups that have sprung up or expanded in the past few years — they're doing more than just protesting "manels," the all-male panels that were once a defining feature of security-focused think tanks.

Feldman-Piltch said #NatSecGirlSquad creates opportunities for networking and mentorship and provides professional development support to women at various stages of their national security careers. It's also putting together diverse panels of its own.

This was the squad's second annual conference and served as a barometer of how fast it has grown since it started as a listserv in 2016.

The group claims thousands of members ranging in age from recent graduates to World War II WASP pilots. The group is constantly expanding, mainly through Twitter and word of mouth. Feldman-Piltch said up to 15 new members join each week, with fees starting at $5 for listserv access and membership tiers ranging from $20 to $100 based on career level.

Last year's event was held in a single day in an office conference room with 70 chairs for 120 attendees. Organizers said this year's gathering had a higher budget and lower ticket prices; it sold out. There were corporate sponsors and recruiters, high-profile panelists, live podcast recordings and breakout sessions over two days.

"I lost a lot of sleep over 'Would people show up anyways? Would anyone want to come to this?' " Feldman-Piltch said onstage. "And I can go to bed mostly happy tonight, knowing we sold out over 400 registrations. So I do anticipate we're going to need more chairs at some point."

Sasha O'Connell is a #NatSecGirlSquad board member who spent nearly 15 years at the FBI and now teaches security policy. For years, she said, the question at industry conferences was whether diversity mattered. Now, that's a given. She said it's not just about representing women — it's about building teams that can tackle the nation's biggest threats. The more diverse the team, she said, the more creative the problem-solving.

No longer "the odd one out"

#NatSecGirlSquad grew out of a single question: What mentorship programs exist for women navigating career paths in national security?

The answer, Feldman-Piltch discovered, was not many.

She posed the question over email to various Washington,D.C.-area nonprofit groups at a time of transition in her own career, hoping they could point her toward professional development resources. Instead, Feldman-Piltch said, she received "200, 250 responses from women who were like, 'I have no idea, but if you find something, please let me know because I'm also looking.' "

So she started a Google group where they could "figure it out together." In the years since, the squad has evolved beyond a listserv. #NatSecGirlSquad hosts workshops and happy hours, runs a research assistant matching program, compiles a resume book to share with employers, and enlists "ambassadors" on campuses to help build a network of college women interested in national security.

Most national security jobs are based in Washington, and connections are essential to even knowing what opportunities exist and where to apply for them, Feldman-Piltch said. She sees the squad as a "hybrid personal-professional network" that can help women break into the field and rise within it. And she believes the squad's work will have an impact on more than just its members.

"Every national security challenge is a people challenge. There is no person in the world that can answer to everything all the time," she said. However, she added, "We can at least hope that the right people are in the room."

Elizabeth Wright, a graduate student and squad ambassador at George Washington University, said the effort to expand diversity is not just for women. She spent the week leading up to the conference encouraging her male friends to attend, emphasizing the inclusivity of the squad.

"It's important for us to tell them that it is for them," Wright said. "Because we can't remotely endeavor anything close to equality without men and women being aligned."

The group offers membership levels to men who want to support the squad financially without accessing full benefits. At the conference, the crowd is almost exclusively women — a flip of the usual gender makeup at national security conferences, noted attendee Kristen Pantano, a recent college graduate.

For all their gains, women in national security still face discrimination and other gender-based challenges, attendees said. Conference volunteer Kristina Drye said her latest experience with it had come in the same hotel, just days earlier.

Drye said she was representing her company at a different conference. She was cross-stitching while tending the booth, waiting for people to approach her with questions.

"I had just spent 10 minutes talking to this man about artificial intelligence, machine learning, conflict in Bosnia, all the things I've spent my life studying," Drye said. "And he looked at me and his last comments were, "Oh my gosh, you're going to make such a good Suzy Homemaker.' "

Comments like that can be discouraging, even if they're not meant maliciously, Drye said. And nearly everyone at the #NatSecGirlSquad has a similar experience to share. 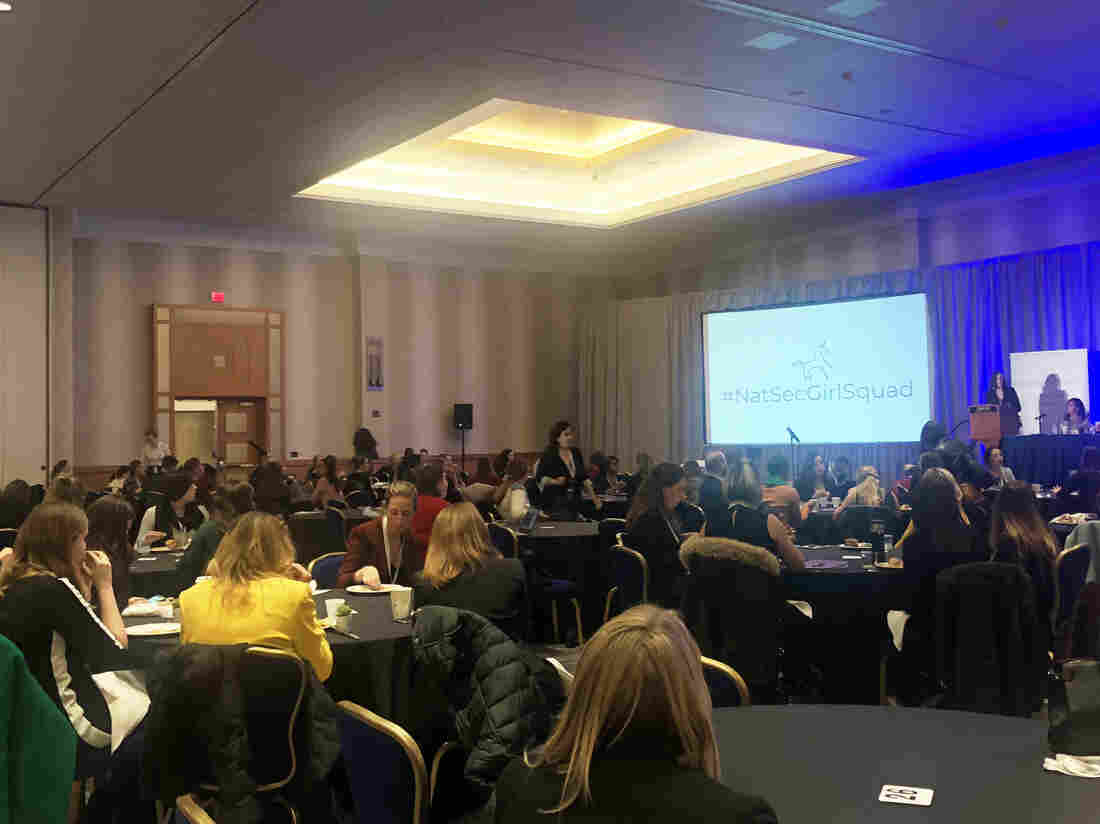 This was the squad's second annual conference. It began as a listserv in 2016. Rachel Treisman/NPR hide caption 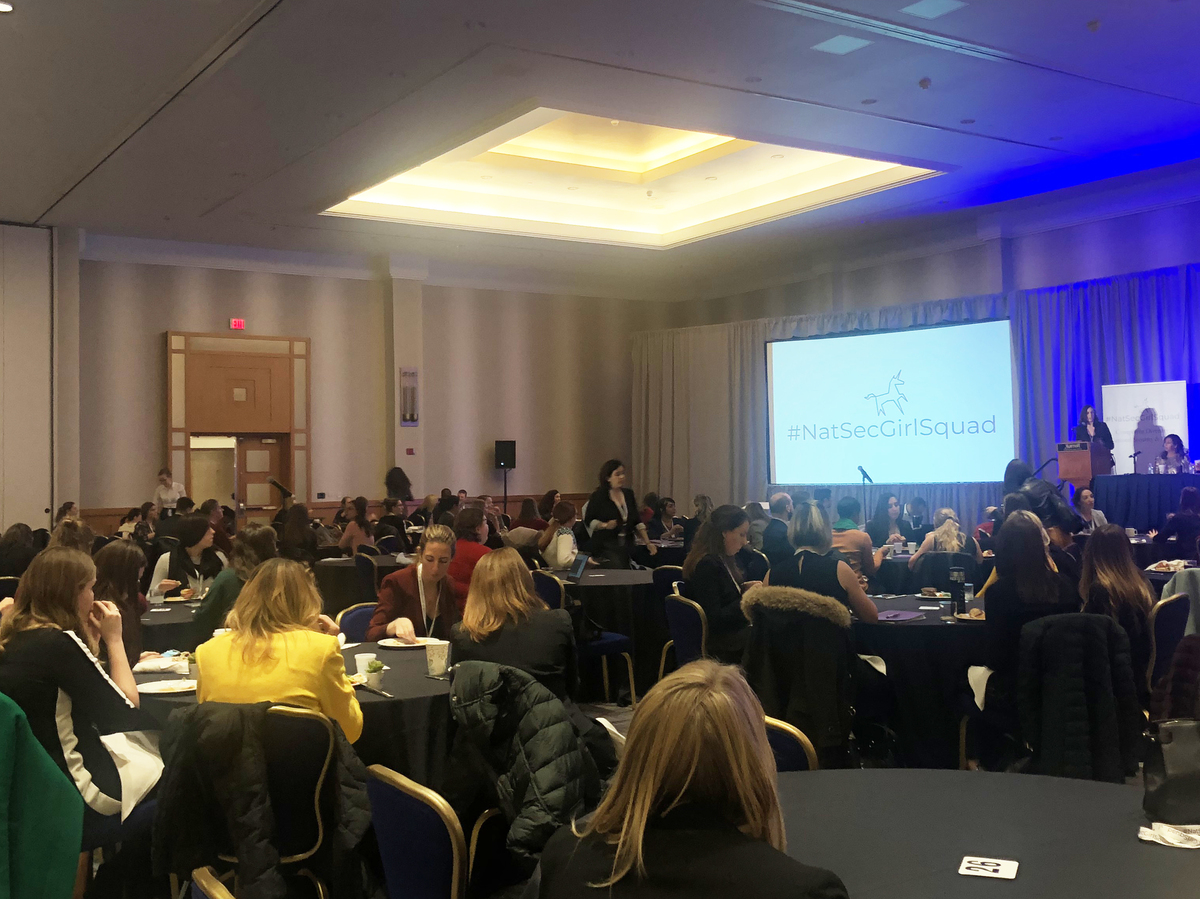 This was the squad's second annual conference. It began as a listserv in 2016.

Stephanie Bolduc Mikesell, a Defense Department employee who helped organize the conference, said she tells younger women to anticipate certain patronizing or inappropriate behaviors so that they can have a response ready. It's no longer enough, she said, to just laugh it off.

Over her career as a civilian in the Pentagon, Bolduc Mikesell said, she's dealt with condescending superiors, deflected off-color jokes and faced unwanted touching.

Her favorite phrase? "This is a workplace."

"Knowing that other people have had similar issues, it makes me feel better that it's not a personal thing," Bolduc Mikesell said of the growing sisterhood in national security. "But it's also insanely frustrating to learn that, oh, it's a systemic issue and it's a lot wider spread than just the Department of Defense or Homeland Security. It's kind of all over the federal government."

As #NatSecGirlSquad's members rise through the ranks, Feldman-Piltch said, their hiring power and mentorship capabilities will grow. She has already seen examples of longtime members paying it forward in this way. As Drye sees it, there are two kinds of people.