Accessibility links
Michael Bloomberg Has Already Spent More Than $100 Million On Campaign Ads As a late entrant in the Democratic presidential primary, Michael Bloomberg is not campaigning in the first primary states and is instead marshaling his billions of dollars into advertising. 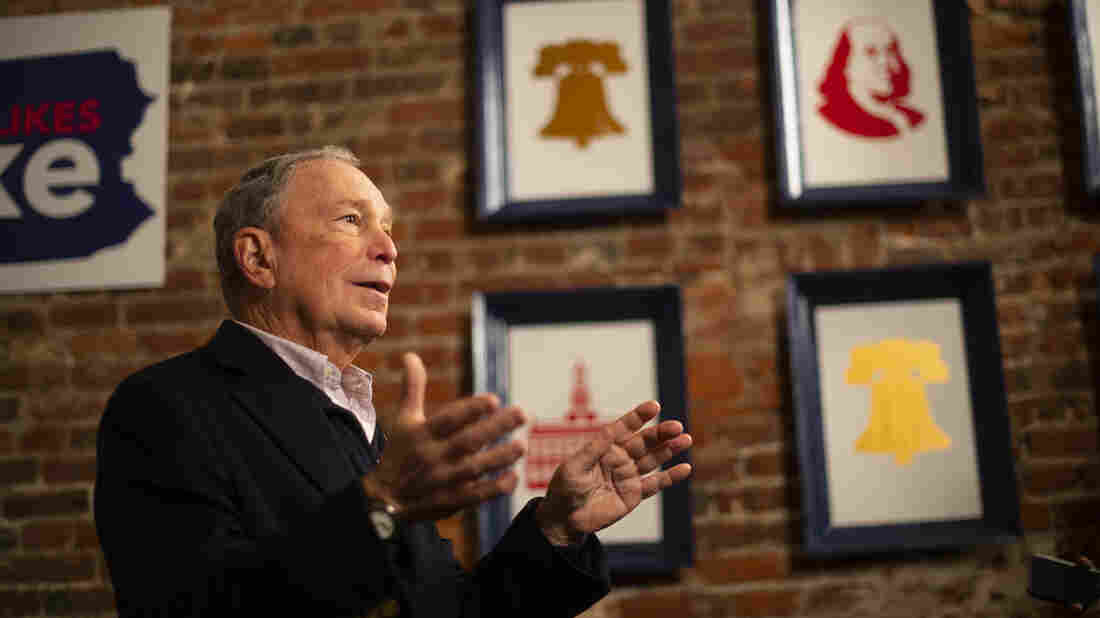 Democratic presidential candidate Michael Bloomberg addresses the press from his Philadelphia field office on Dec. 21. The former New York City mayor entered the race late and is not contesting the early primary states, instead concentrating efforts toward Super Tuesday and beyond. Mark Makela/Getty Images hide caption 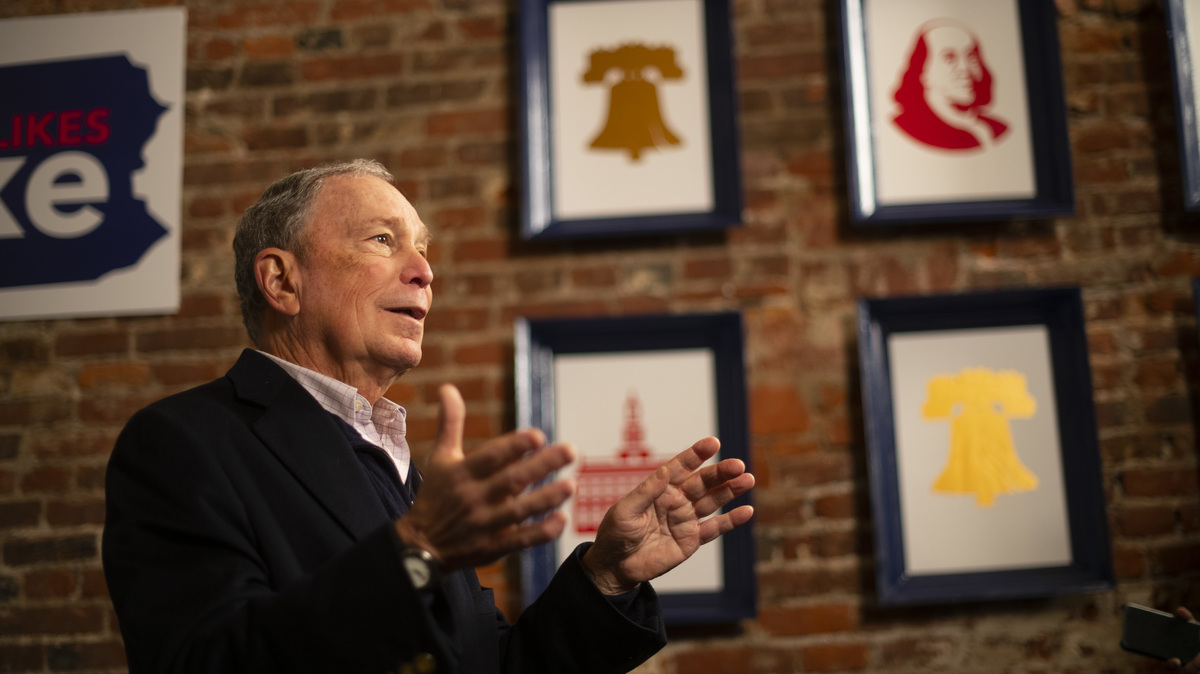 Democratic presidential candidate Michael Bloomberg addresses the press from his Philadelphia field office on Dec. 21. The former New York City mayor entered the race late and is not contesting the early primary states, instead concentrating efforts toward Super Tuesday and beyond.

Bloomberg and Tom Steyer, another billionaire in the Democratic contest, have in total spent about $200 million so far, according to Advertising Analytics, a firm that tracks campaign ad expenditures.

That's historic levels of spending. Advertising Analytics says the two candidates' combined tally so far is about a quarter of all the money that was spent in the 2016 presidential cycle — primaries and general election together.

The next-biggest spender among Democrats is Pete Buttigieg, the mayor of South Bend, Ind., and he's paid just $20 million for ads so far.

Bloomberg's strategy is unique — and especially notable in a Democratic primary in which big money and billionaires have often been vilified.

As a late entrant in the race, Bloomberg is bypassing campaigning in the first four primary states and is instead focused on marshaling his money into advertising. In recent weeks he's been blanketing the airwaves, introducing himself to voters in essentially every TV market in the country.

"Given the amount of money that he has spent, he's increasing in name recognition. You see that by the poll numbers," says Democratic strategist Karen Finney.

Indeed, Bloomberg has seen a slight increase in his poll numbers. He's now averaging around 5% nationally. That's higher than many Democrats who entered this race long before he did — though he's still well behind the leading candidates.

To become New York City's mayor, Bloomberg proved he can finance his own election and win. But Democratic pollster Anna Greenberg says it's not easy, especially in a Democratic primary.

"Self-funders can win elections, but it's always challenging for them," she says. "And there's the perception that you're trying to buy the election, which is quite problematic for some voters. I mean, it's less about someone being a billionaire and more about the idea that they're trying to sort of buy it."

Greenberg isn't discounting the importance of money. In fact, she says when she's worked in primaries in which nobody really knows any of the candidates, the person who spent the most money has won.

But this Democratic presidential primary is different. People are already plugged into the race.

"You have a lot of candidates that are well-known, you have a lot of very engaged voters following the primary," Greenberg says. "Somebody coming in with money can't really — it's not a blank slate. People already have ideas of who they support, and so it's just much harder for that money to have influence."

A network of mayors

Bloomberg's money strategy is not just about advertising; it's also about hiring, especially in the states that will vote right after the first four (Iowa, New Hampshire, Nevada and South Carolina).

"The recent announcement that he's added 200 staffers on the ground in a number of the March [3] Super Tuesday states, it changes the calculation a little bit for the candidates who are currently in," Finney says.

Bloomberg's strategy is based on the assumption that Democratic voters are anxious about their options. His campaign thinks he has a path if no candidate emerges as the clear favorite after the first few states vote.

"You don't need to have early primary states," says Steve Williams, mayor of Huntington, W.Va. "He's got a network all across the country. What he has done, nobody, nobody has been able to match."

That network Williams is referring to, it's mayors — mayors who trust Bloomberg and feel indebted to him because they've received millions of dollars in grants to build art centers or fight climate change. After Bloomberg left office, he leveraged his personal fortune into helping other cities.

Earlier this month, Williams endorsed Bloomberg, whose foundation gave the city of Huntington assistance related to the opioid epidemic.

"Somebody helps you, you help them," Williams says, "and it's amazing how our city has benefited from Mayor Bloomberg's support."

Mayors who support Bloomberg say it's not just about the money; it's also about witnessing his expertise and judgment firsthand.

An early focus on battleground states

Bloomberg is essentially running a general election campaign in the primaries.

Earlier this week he launched a digital ad depicting Democratic voters in battleground states such as Michigan, warning that President Trump could win reelection.

"We're going to places where Democrats for the most part are not going right now, where we have to win in order to win the White House in 2020," says Michael Nutter, a former Philadelphia mayor who's now Bloomberg's national political chair

Nutter points to his home state.

"Pennsylvania doesn't vote until April," he says. "But there's an office now open in Philadelphia and there will be others in Pennsylvania way before [the primary]."

Bloomberg is trying to address the central question many Democratic voters have: Who can beat Trump?

Campaigning in battleground states is a key part of that plan, but so is money. Bloomberg's theory is that Trump has buckets of money to spend, and Democrats need to be able to compete with that.

The Trump campaign and the Republican National Committee raised $300 million from January through September — and that's before Trump's impeachment, which energized Republican voters in opposition and will no doubt make the year-end tally substantially higher.