Accessibility links
Trump Battles Toilets, Showers, Dishwashers, Lightbulbs In Rally Speech There is both policy and politics behind President Trump's unusual applause lines about about his frustrations with the way low-flow toilets flush. 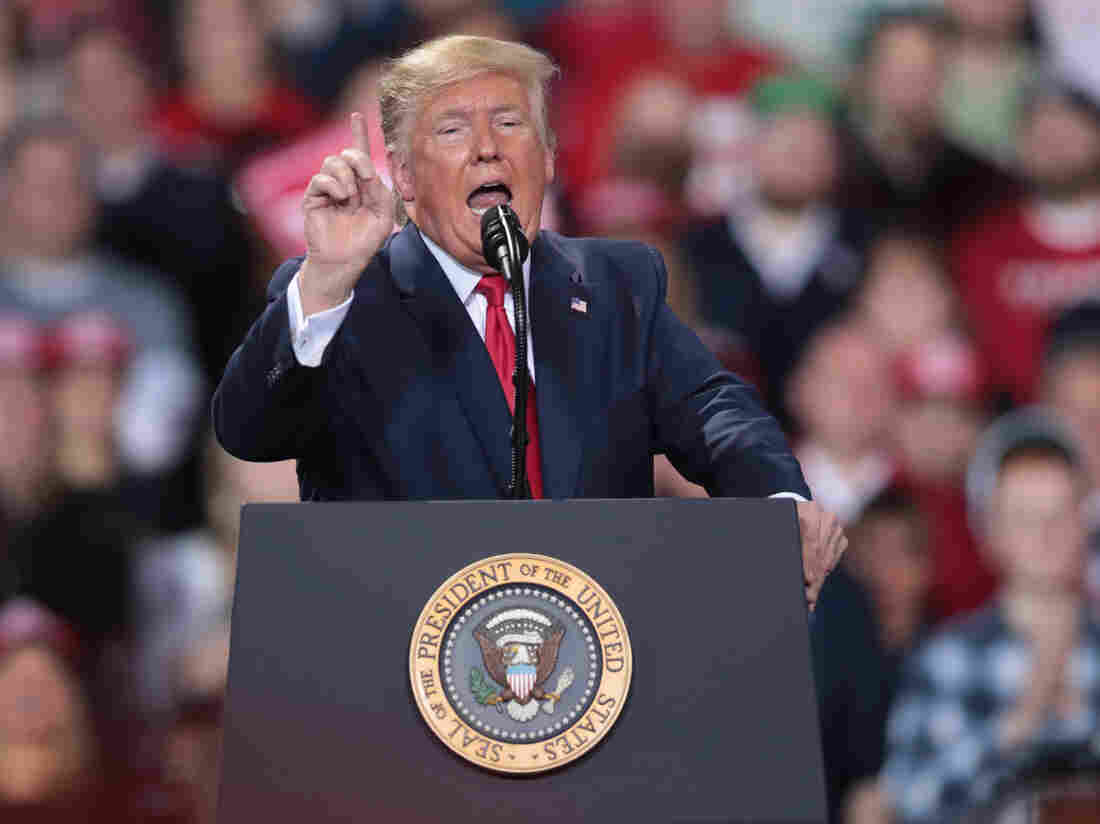 President Trump's complaints about toilets, dishwashers and lightbulbs make for an unusual political rallying cry, but it's one that fits with his deregulatory agenda. Scott Olson/Getty Images hide caption 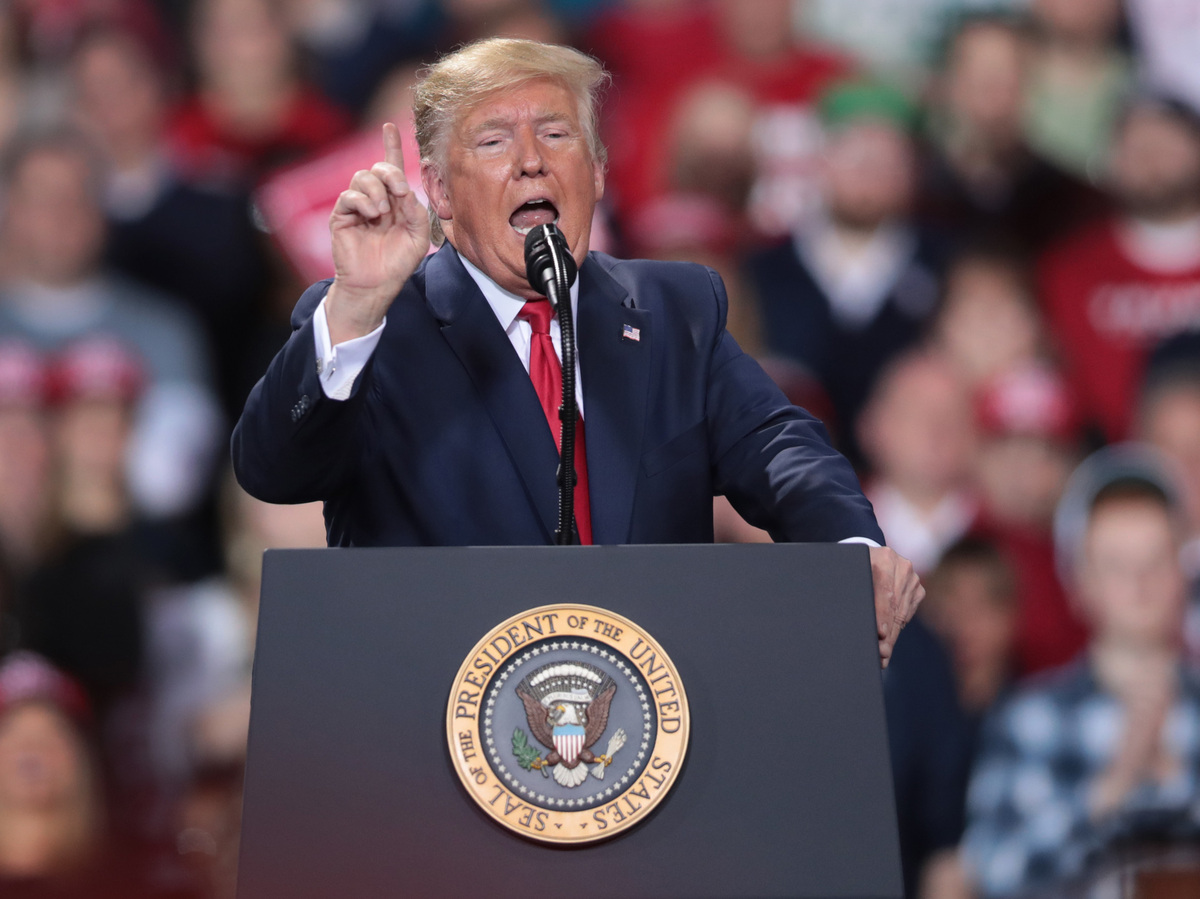 President Trump's complaints about toilets, dishwashers and lightbulbs make for an unusual political rallying cry, but it's one that fits with his deregulatory agenda.

On the night that the House of Representatives voted to impeach President Trump, he delivered a two-hour campaign rally speech that took a detour — into the bathroom. His long riff about plumbing, household appliances and lightbulbs had the crowd in Battle Creek, Mich., cheering and laughing along.

"I say, 'Why do I always look so orange?' You know why: because of the new light," Trump said in a complaint about energy-efficient lightbulbs. "They're terrible. You look terrible. They cost you many, many times more. Like four or five times more."

Trump has long railed against clean-energy-producing wind turbines, but recently he has added lightbulbs and other household items to his repertoire. It's an unusual political rallying cry, but it's one that fits with Trump's deregulatory agenda.

The Trump administration is actively exploring rolling back efficiency standards related to appliances and plumbing. It has already moved on incandescent lightbulbs, prompting the White House to recently tweet, "If you like your lightbulbs, you can keep your lightbulbs!"

If you like your lightbulbs, you can keep your lightbulbs! The Obama Admin tried to limit Americans to buying more-expensive LED bulbs for their homes—but thanks to President @realDonaldTrump, go ahead and decorate your house with whatever lights you want. 💡

The tweet inaccurately blamed the standards on the Obama administration. In reality, they date back to Republican President George W. Bush's time in office. All of Trump's complaints relate to efficiency standards phased in over many years and multiple administrations.

"Remember the dishwasher, you'd press it. Boom — there'd be like an explosion. Five minutes later, you open it up, the steam pours out," Trump said reminiscing about dishwashers that used more energy and water to wash and dry dishes. "Now you press it 12 times. The women tell me, again. They give you like four drops of water."

Setting aside his assumption that women are the ones who do dishes, Trump also shared his thoughts on faucets and shower heads. He even turned "toilets" into a call-and-response line, asking the crowd, "What goes with a sink and a shower?"

Pantomiming a flushing motion, Trump brought his frustrations with low-flow toilets to life. "Ten times right, 10 times. Bah bah," Trump said, before pointing at some poor soul in the crowd and accusing him of requiring a lot of flushes. "Not me, of course. Not me. But you. Him."

Peter Gleick with the Pacific Institute in Oakland considers this all to be Trumpian nostalgia for a time when showers were strong, toilets used 4 gallons a flush and lightbulbs burned your hands when you touched them.

Gleick said these newer household items are part of an "efficiency revolution," doing the same tasks with less and halting the upward trajectory of water and energy consumption in America. And, yes, a dishwasher cycle takes longer, and incandescent bulbs are cheaper to buy upfront.

But in the long run, "They're much more expensive, because they use a huge amount of energy, which we pay for over time and they burn out 20 times faster," Gleick said.

Based on the way Trump talks about efficient lightbulbs, it seems his complaint is with compact fluorescent bulbs, which were the only low-energy bulbs widely available 10 years ago. But today, store shelves are full of LED bulbs with warmer-looking light and even longer life spans. Gleick suspects Trump's toilet complaints are outdated as well, because low-flow toilet technology has come a long way in recent years.

"Some people got bad toilets, but that was 15 and 20 years ago," Gleick said. "And now the new toilets not only use a tiny fraction of the water the old toilets used to use, but the truth is they flush better — and if you have a bad toilet that doesn't flush, well, that's because you have a bad toilet."

The idea that Trump's crusade against efficient toilets and lightbulbs could influence policy is something Gleick finds galling. But others welcome the president's attention.

Free-market groups like the conservative Heritage Foundation have been advocating to loosen efficiency standards. These guidelines started in the 1970s and have ramped up over the years, with relatively little notice and not much pushback, even from industry, said Nick Loris, who focuses on energy and environment policy at Heritage.

"I think people kind of thought it was low-hanging fruit," Loris said of the idea that household items could use less energy and water and save consumers money at the same time. "It was a win-win. But I think from a free market perspective, we also want to make sure that consumers and businesses have those choices."

Another free market organization called the Competitive Enterprise Institute petitioned the Department of Energy to allow a new class of dishwasher that would run a shorter cycle while using more energy and water.

But Loris said it's not clear whether that's where Trump's latest rally riff is coming from. "It feels a little bit almost like an 'OK, boomer' moment that we've had with these comments, but at the same time, I think there are some policy implications behind it," Loris said.

When Jeffrey Tucker first heard Trump complain about faucets, he was overjoyed. "I thought, 'Hmm, that's interesting,' " said Tucker, with the American Institute for Economic Research. "I've never heard a politician talk about this."

A decade ago, Tucker wrote an an entire book, called Bourbon for Breakfast, bemoaning how the slow creep of efficiency and government regulation had made American homes not function like they used to. He is no fan of Trump, but he's all-in on the "make toilets and dishwashers great again" ethos.

"I've never been in a social situation where everybody didn't agree," Tucker said. "My shower's terrible. My toilet doesn't work. I'm tired of plunging. And so on and so forth. Everybody is really annoyed by it. Trump sees it and talks about it, and gets everybody riled up because it is an infuriating problem."

A previous version of this story misspelled Nick Loris' last name as Lorris.