Accessibility links
U.S. Steps Up Deportations To Iraq, Despite Worsening Violence There Many deportees have arrived in Iraq without money, valid IDs or knowledge of the language and country. They struggle to find work and fear going out. "Everything is shocking to me," one deportee says. 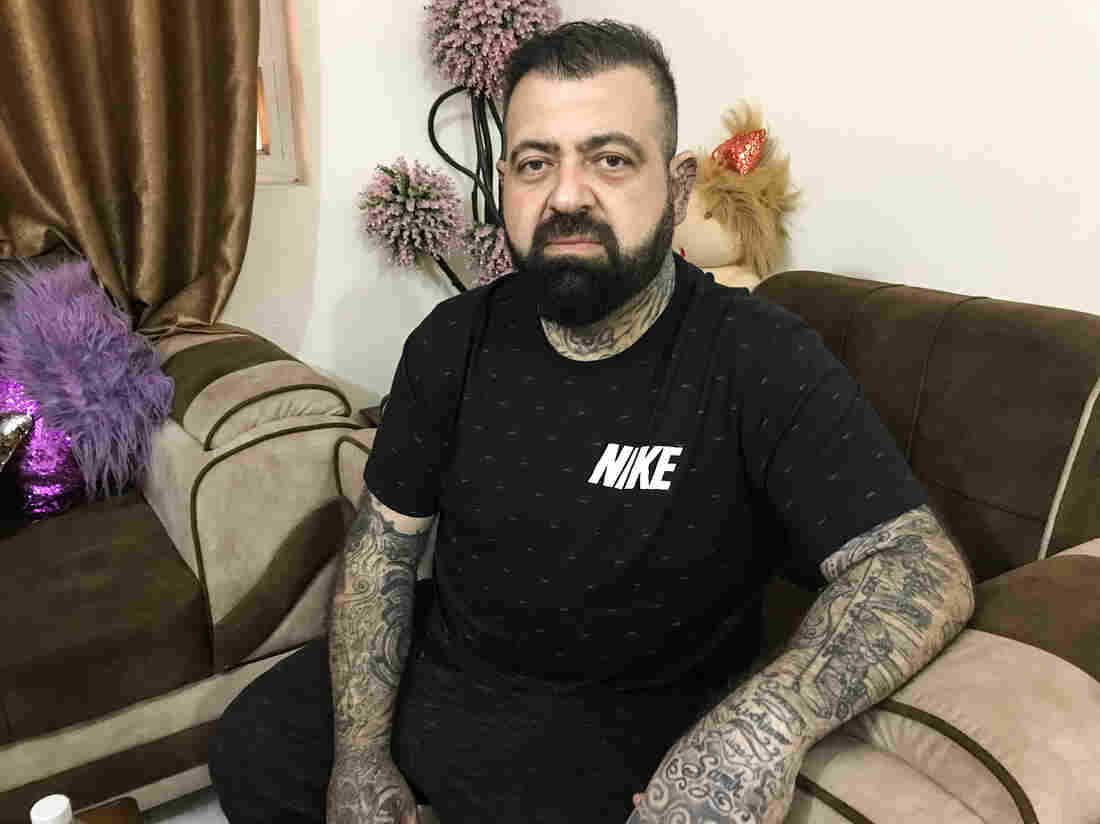 Samir Kada lived next door to Jimmy Aldaoud in Baghdad. Kada is one of dozens of Iraqis from Michigan deported from the U.S. in 2018. Jane Arraf/NPR hide caption 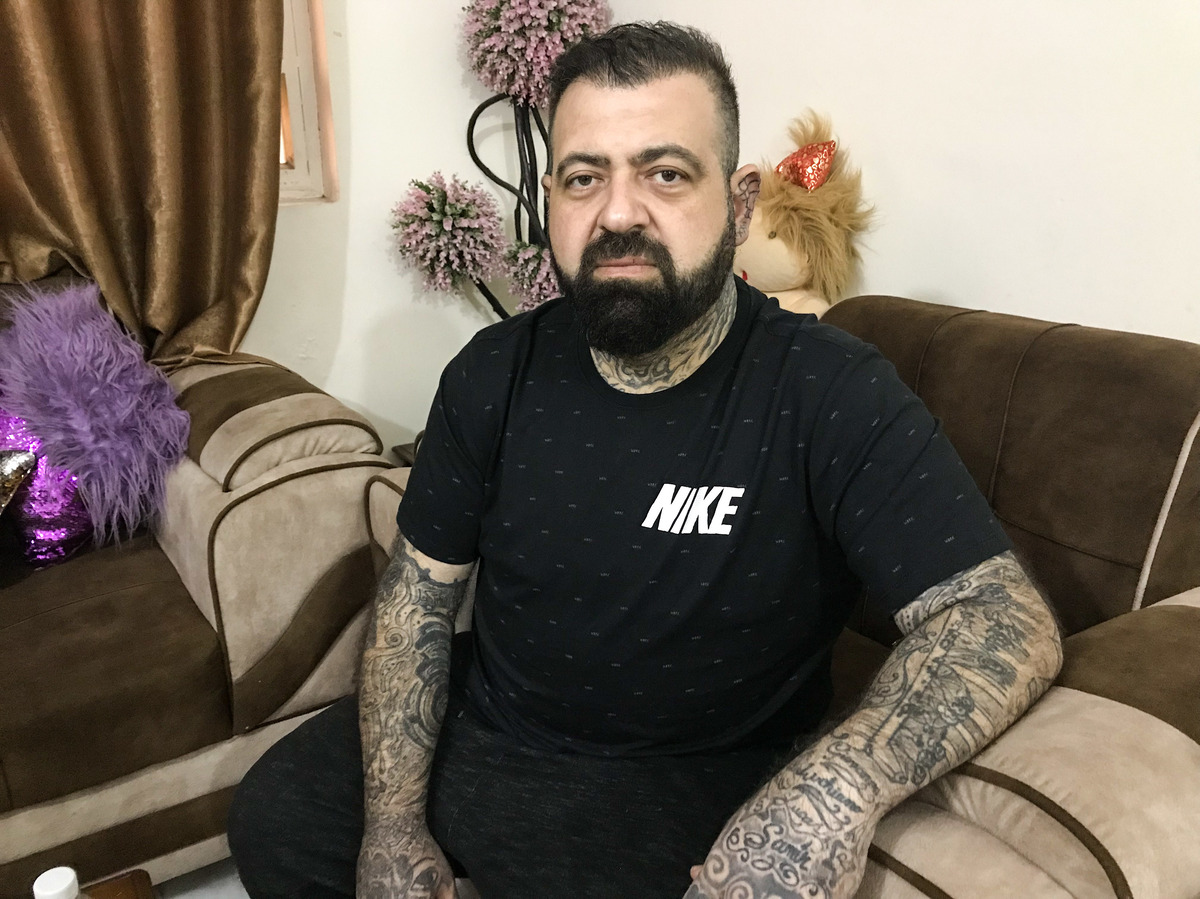 Samir Kada lived next door to Jimmy Aldaoud in Baghdad. Kada is one of dozens of Iraqis from Michigan deported from the U.S. in 2018.

The apartment in Baghdad where Jimmy Aldaoud lived — and died, just two months after being deported from the U.S. — has been cleaned and emptied. But on the windowsill in the bedroom, there's a remnant of the fear he felt about being sent to a country where he'd never been: two plastic toy pistols with orange foam tips and bright pink suction-cup darts.

"He would sleep with these in his hands," says Samir Kada, another deportee from the U.S. who lives next door and looked out for him. "He said, 'If anybody comes, I'm going to pull it on them. I swear to God.' "

'I've Got Nothing Over Here': Michigan Man Deported By ICE Dies In Baghdad

Aldaoud, 41, died Aug. 6, two weeks after making a video saying he was scared and sick, and begging to go back to the United States. His family and friends say he had diabetes and had been diagnosed with bipolar disorder and schizophrenia.

In the apartment, next to the toy guns, there's an unused syringe for the insulin Aldaoud would forget to refrigerate and leave out in the heat.

Aldaoud's death caused an outcry in his Michigan community of Chaldean Christians, a minority that, along with other minorities, has faced discrimination and sometimes persecution and even targeted killings in Iraq. Human rights groups and members of Congress have called for U.S. Immigration and Customs Enforcement to delay deportations.

In 2017, the Trump administration ordered stepped-up deportations of Iraqis convicted of felonies who were in the U.S. legally but had not become citizens. U.S. and international law prevent deportation back to countries where deportees would be under threat. But ICE has continued to deport Iraqis to a country now wracked by anti-government protests and renewed violence.

Many of the deportees hadn't seen Iraq since they were children, and some had never seen it at all. Most served time for felonies in U.S. prisons years ago, and those convictions have prevented them from becoming citizens.

Aldaoud was born in Greece to Iraqi refugee parents who came to the U.S. legally in 1979, when he was a baby. He spoke no Arabic and had never been to Iraq when ICE picked him up in Michigan as part of a sweep in 2017. He'd served time for convictions in a series of criminal charges over the course of two decades.

After almost two years in immigration detention, the 41-year-old Christian man was sent to Najaf, a Shiite holy city in southern Iraq.

"His family called me. They told me, 'Please go pick up Jimmy.' I mean, you know, he ain't got no papers. He ain't got no clothes — nothing, nothing — not even a penny," says Kada, another member of Michigan's Chaldean Christian community, deported in 2018. "Anyways, he came, and he went into a depression."

Kada and others who knew Aldaoud say he was afraid to leave the apartment. 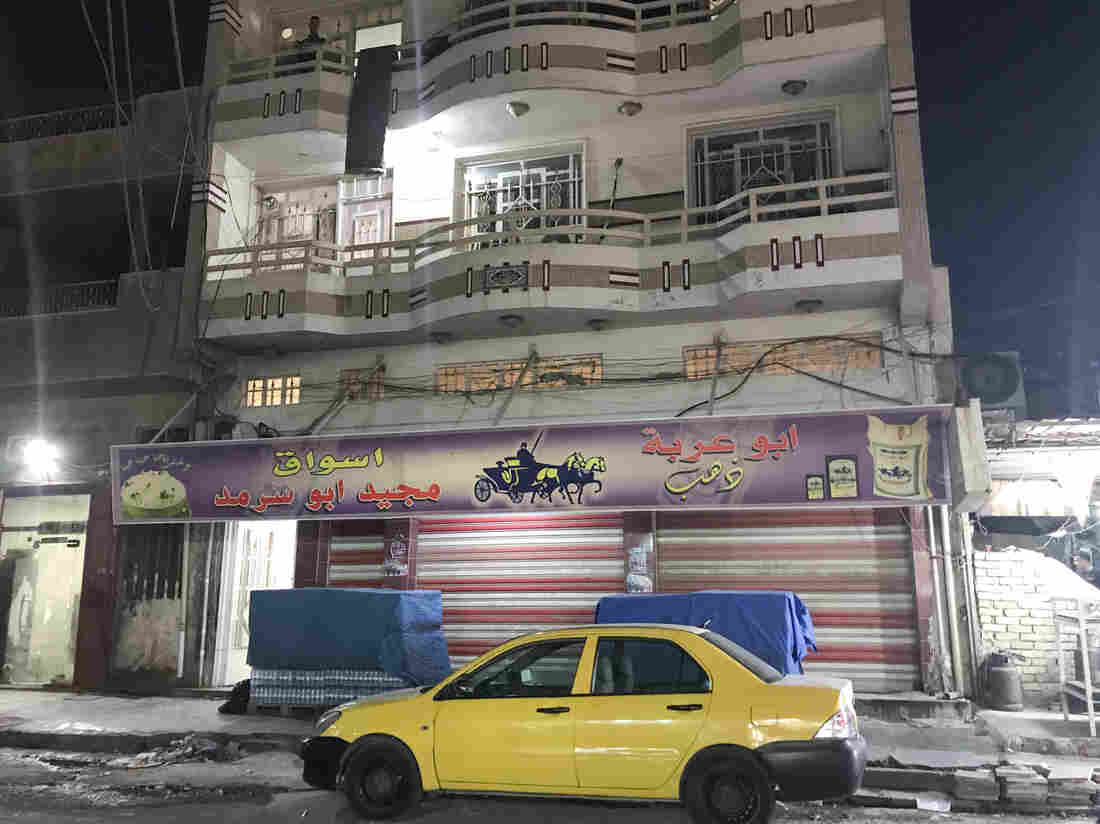 In a video shot outside the shuttered shops on this street in Baghdad this summer, Jimmy Aldaoud said he was scared and sick. He died two weeks later. Jane Arraf/NPR hide caption 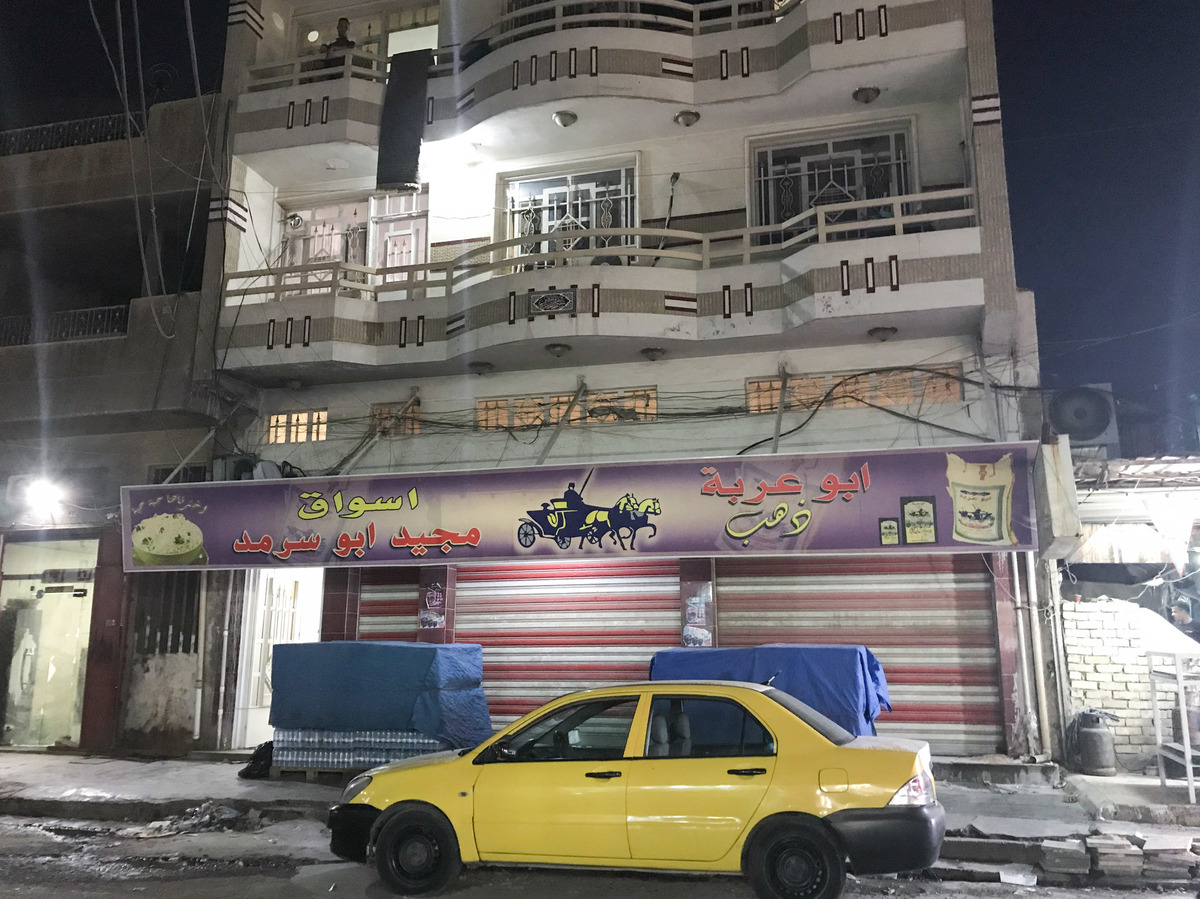 In a video shot outside the shuttered shops on this street in Baghdad this summer, Jimmy Aldaoud said he was scared and sick. He died two weeks later.

"He talked to himself all day — 'God, please take me back home; please, God, I don't know nothing over here. I'm scared. I'm Christian. I'm this, I'm that.' He was walking over here naked, like, with no clothes. I told him, 'We can't do that over here.' Like, he was going crazy."

Kada, 39, says ICE deported Aldaoud with a month's worth of insulin and no other medication. Asked by NPR, ICE would say only that it deported him with an adequate supply of medication.

Aldaoud called Kada in early August, crying, saying he was on the floor and he couldn't breathe. An ambulance took Aldaoud to the hospital, which discharged him a few hours later. When an Iraqi friend checked on him later that same day, he found Aldaoud lifeless on the floor. The morgue listed Aldaoud's cause of death as heart failure.

"I don't have anything to prove who I am"

Most of the deportees have no valid Iraqi identification documents. They are sent from the U.S. with no passport, only a one-way travel document known as a laissez passer, issued by the Iraqi Embassy in Washington, D.C. With no way to prove who they are, they are subject to arrest at Iraqi checkpoints, can't rent apartments or even receive money via wire transfers.

"We can't speak Arabic," says Kada. "We can't read and write. We can't do nothing. We can't go anywhere."

Nashat Butris was deported in July with no money and no clothes. He says he stayed with Jimmy Aldaoud for a few days when he arrived. Now he has a bunk in a sparsely furnished room at a shelter run by a church in Baghdad. He has no relatives in Iraq and speaks only broken Arabic.

"It's just shocking. Everything is shocking to me," he says.

Butris' deportation resulted from a conviction for cocaine possession years ago. The laissez passer issued by the Iraqi Embassy includes a photo of him wearing an orange prison jumpsuit. 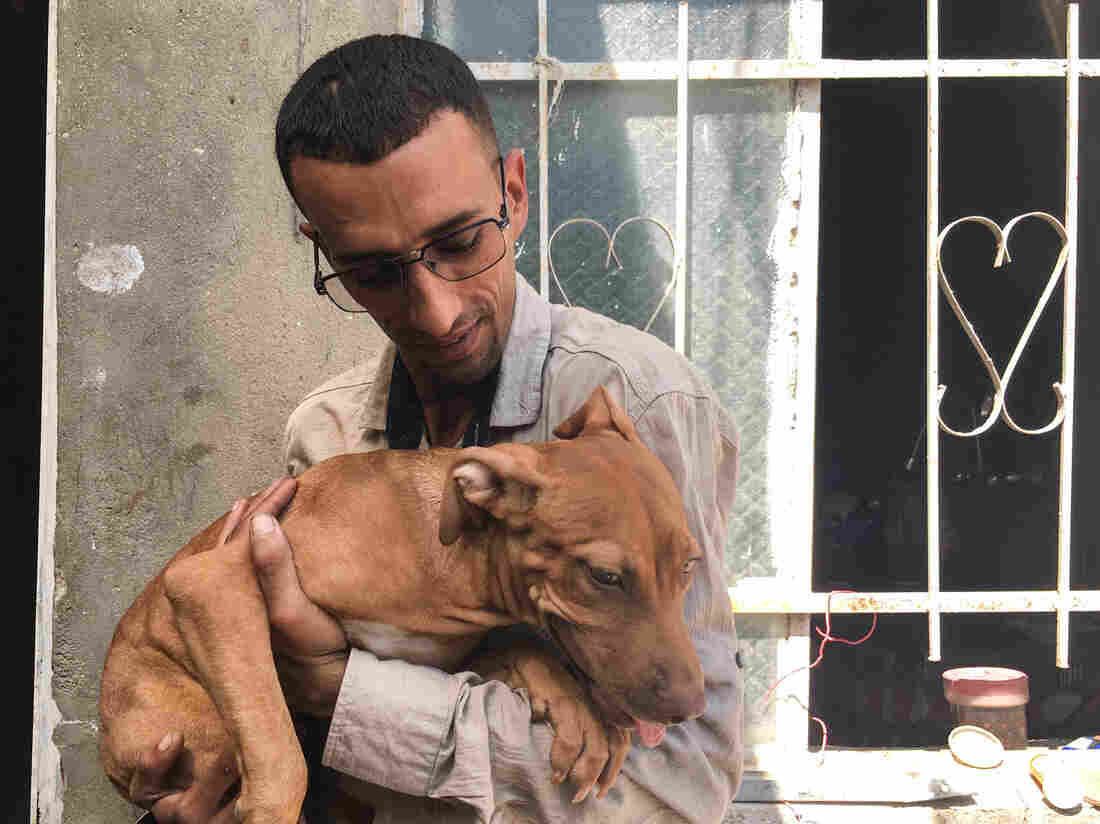 Naser al-Shimary cuddles his dog. "She is all the friends and family I have here," he says. Shimary says people in his neighborhood tell him dogs are religiously unclean. He is afraid she will be poisoned. Jane Arraf/NPR hide caption 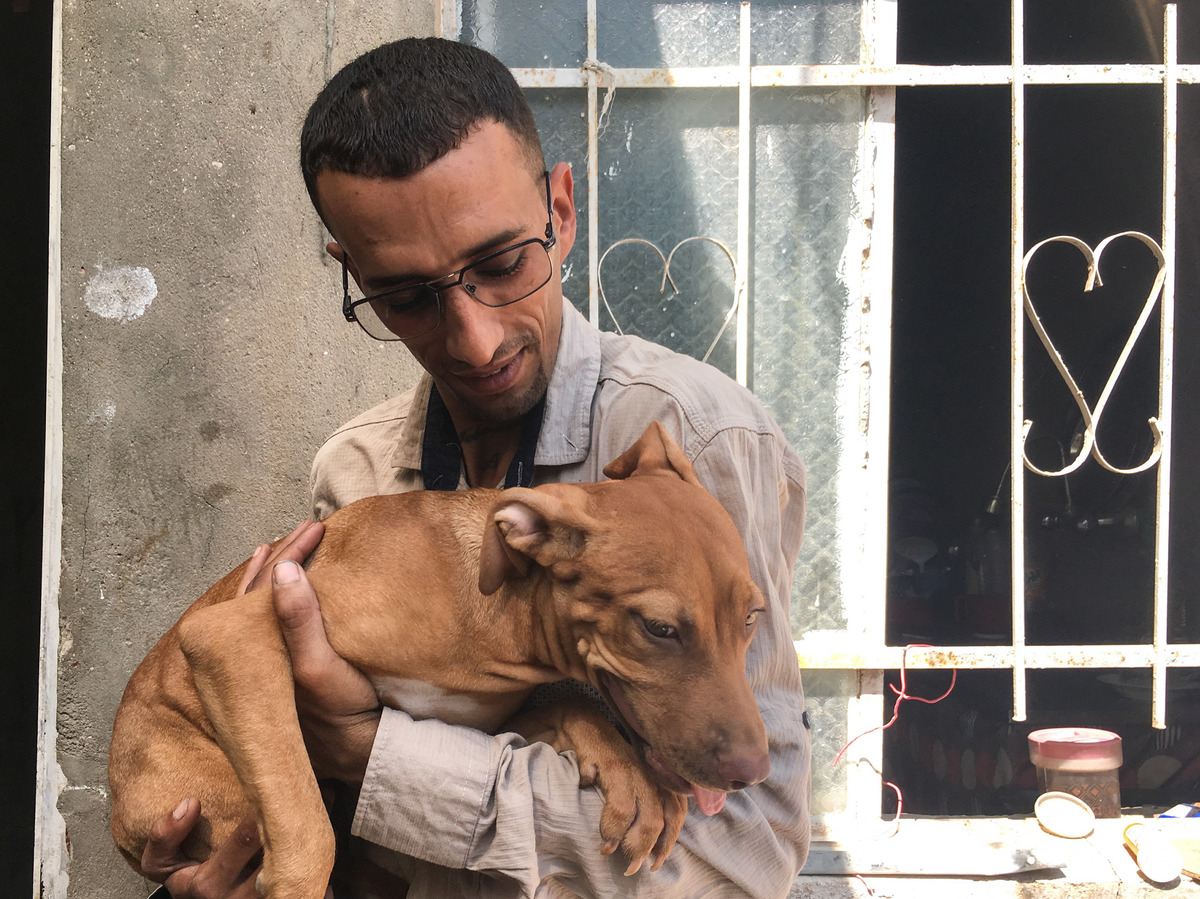 Naser al-Shimary cuddles his dog. "She is all the friends and family I have here," he says. Shimary says people in his neighborhood tell him dogs are religiously unclean. He is afraid she will be poisoned.

"This government here, they're not believing in this travel document," he says. "I have no IDs and I'm not allowed to leave this compound because I don't have anything to prove who I am."

Kada, who owned businesses in Michigan, is luckier than most. He has money — enough to pay for the Iraqi ID he says cost him $6,000, and which allows him greater freedom of movement than other deportees. But most, like Butris and Aldaoud, have little or nothing.

"We don't want another Jimmy Aldaoud"

Over the past year, the Iraqi Embassy has issued travel documents for about 140 Iraqis due to be deported, according to a foreign ministry official in Baghdad who asked not to be identified in order to speak with NPR candidly. So far, about 60 of those 140 have been deported.

After Aldaoud's death, the embassy stopped issuing travel documents for those scheduled for deportation but known to have significant health problems.

Some of the deportees agree to be sent to Iraq simply to avoid what ICE tells them could be years in immigration detention.

"Honestly, the pressure that the United States government put on me and what I had to endure, this was the only way to get physical freedom," explains Benjamin Rayes, 47, a machine tool autoworker in Michigan who was deported to Iraq in early December.

Rayes served four years in a U.S. prison for insurance fraud. After his release from a halfway house two years ago, ICE arrested him and placed him in immigration detention before putting him on a plane to Baghdad.

His life so far in Iraq is tightly constrained. The father of two girls, ages 7 and 10, Rayes says he was interrogated for hours when he landed in Baghdad without an Iraqi ID. His Chaldean Christian family is originally from the north of Iraq, but all of his relatives have emigrated. For now, he's staying with friends of friends in the south of Iraq. Without ID, he can't travel even within the country to apply for the documents he needs.

Adding to the challenges facing deportees is the worsening violence since anti-government protests began raging in Baghdad and the southern provinces in October. Iranian-backed militias that are believed responsible for killing and abducting protesters blame "U.S. agents" for fomenting the protests.

Already in danger of arrest and detention, Iraqis affiliated with the U.S. risk being accused of being U.S. spies. For many deportees, tattoos, American accents and lack of Arabic language skills make them easy targets.

Despite intense pressure on Iraq to accept more deportees, Iraq refused until last year to issue travel documents for Iraqi citizens who refuse deportation. That policy changed with a new Iraqi government last year, according to another foreign ministry official, who asked not to be identified because he was not authorized to speak publicly.

"They tell me I'm not welcome"

Almost two years after he was deported, Naser al-Shimary lives in fear in southern Iraq. He was beaten last year by a group of strangers, and his neighbors were too frightened to help him. Now he sleeps with a kitchen knife next to him for protection. At night, he padlocks himself into the house.

Like Samir Kada and other deportees, Shimary has visible tattoos, uncommon in Iraq. He says mosques refuse to let him in.

"They tell me I'm not welcome because tattoos signify bad character," he says.

He loves his pet dog, but that's caused trouble for him too. People in his neighborhood tell him dogs are religiously unclean and he fears she will be poisoned. "She is all the friends and family I have here," he says.

Shimary, who used to play chess with Jimmy Aldaoud back in the U.S. while they were both in ICE detention, is a U.S.-certified mechanic. But he has struggled to find work in the south and is afraid to take a job in Baghdad or farther north, areas he thinks would be even more dangerous.

Back in the U.S., he had an auto body shop. His partner and son, who recently turned 5, are still there. The two visited him in Baghdad last year, but Shimary believes it's too dangerous in Iraq for them to return. He's hoping to find a way to resettle in another country with his family. For now, he relies on video calls to his son — including one to wish him happy birthday.

"He was like, 'Papa, I saved you a piece of cake. If you want it, you gotta come here and get it,' " he says. Shimary says he laughed, "because I can't show weakness," but says it hurt.

He knows he won't be going back.