Accessibility links
Backstage Magic At 'Harry Potter And The Cursed Child' The creators of Harry Potter and the Cursed Child designed their show so it wouldn't look like the world Potterheads knew from the movies. They've documented that process in a new book, The Journey. 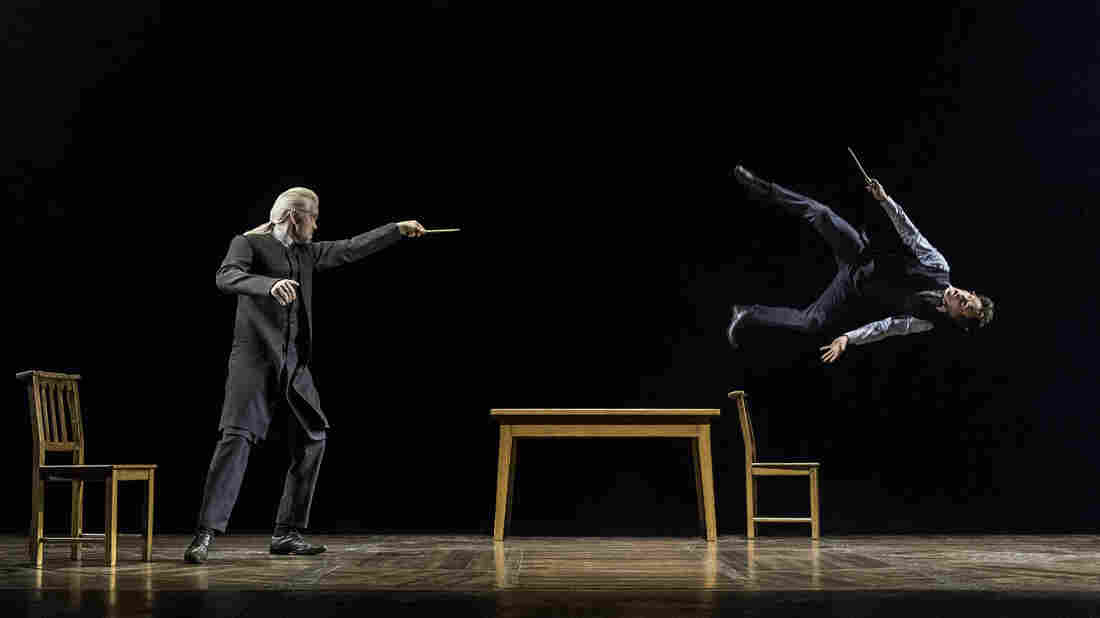 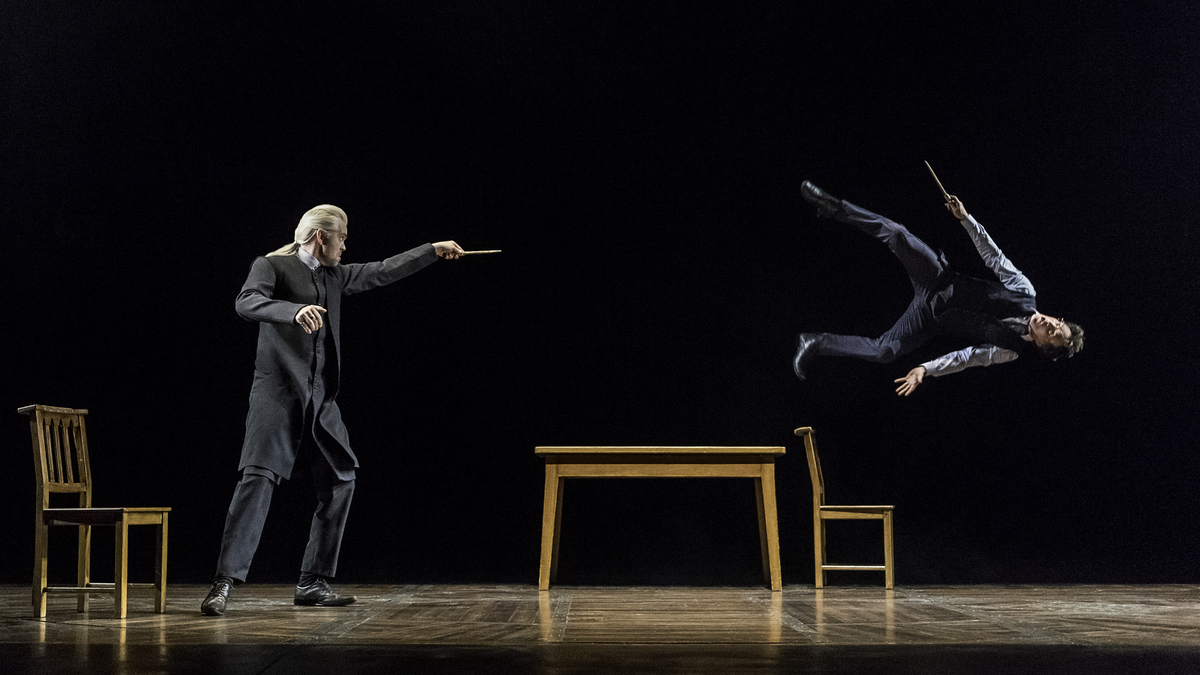 When the creators of Harry Potter and the Cursed Child were working on adapting the wizarding world for the stage, they knew a lot of people have seen the Harry Potter movies. And they didn't want to reproduce the things most people have already seen. 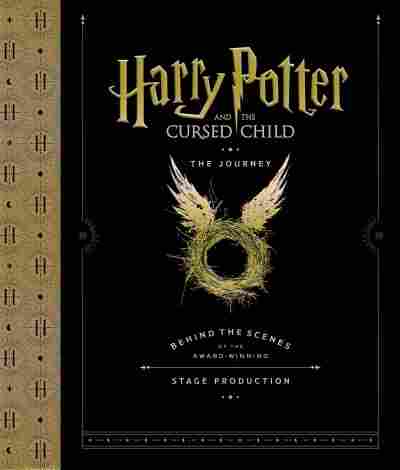 Harry Potter and the Cursed Child

The Journey: Behind the Scenes of the Award-winning Stage Production

Title
Harry Potter and the Cursed Child
Subtitle
The Journey: Behind the Scenes of the Award-winning Stage Production
Author
Jody Revenson and J. K. Rowling

The result is a spectacle that relies much more on human-powered magic than special effects trickery. And the show's creators have documented that process in a lavish new coffee-table book, Harry Potter and the Cursed Child: The Journey. So I went on my own journey, backstage at the current Broadway production, to see how that magic is made.

Around and under the stage of Manhattan's Lyric Theater, there's a warren of corridors and staircases so complex you almost expect to pop out in Hogsmeade. But instead, I end up in a rubber-floored workout room where today's cast is warming up for the show, directed by movement captain James Brown III (who also plays the magisterially surly Bane the Centaur).

It's pretty intense. There's yoga, stretching, and some hard-core calisthenics. Grunts and groans ripple around the room as Brown leads everyone through their paces. This isn't usual for a Broadway show, but then not that many shows are this physical. The actors in Cursed Child create effects that would have been done digitally onscreen with their own bodies, and with the help of some special crew members.

"It's a Japanese form originally," says movement director Steven Hoggett, who designed all the acrobatics you'll see on stage. "We call them ninjas, black arts is also a name for it, where there are performers that you can't see in the space because they are wearing completely black. And they are against a black background."

Muggles Rejoice: 'Harry Potter And The Cursed Child' Is Now On Broadway

So when I watch Harry and Draco rehearse their duel across the kitchen table, blasting each other with spells, flipping and flying through the air, the effect is startling — even in this brightly lit rehearsal room. "We use black arts to create a battle where they cast spells at one another," says Hoggett, "and things happen to their bodies which would seem impossible on a normal human body."

Hoggett tells me the ninjas use a special code of taps to let the actors know they're there — but still, it takes a lot of trust. "I mean, in lots of ways you are throwing yourself into the darkness, hoping that somebody is there to put their hand out and hold the back of your head." 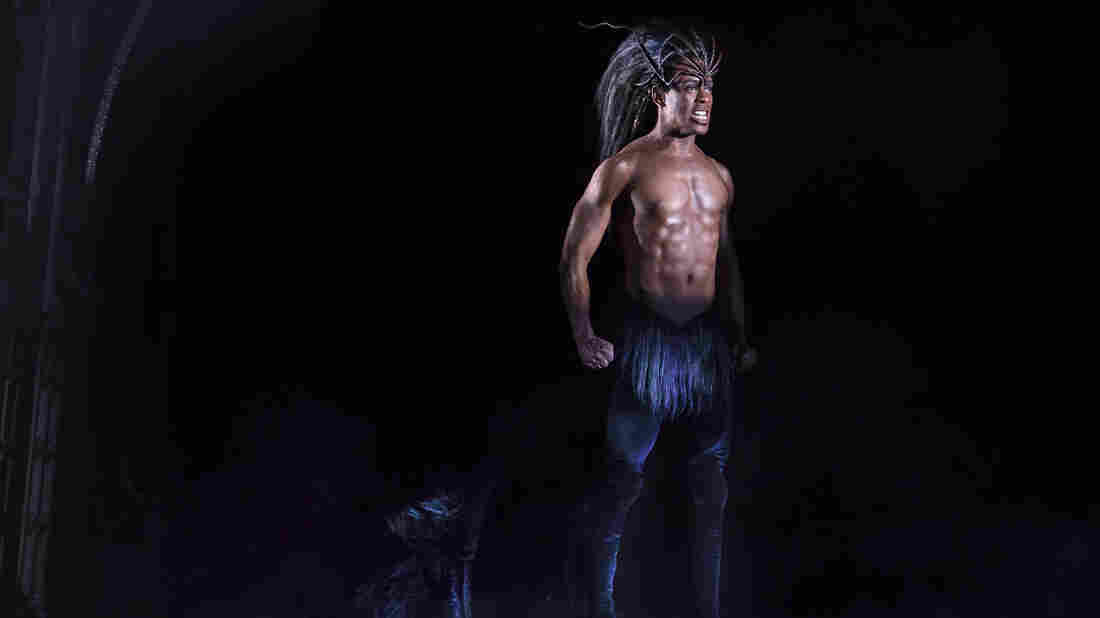 James Brown III, imposing both onstage as Bane the Centaur and behind the scenes as the movement captain. Matthew Murphy hide caption 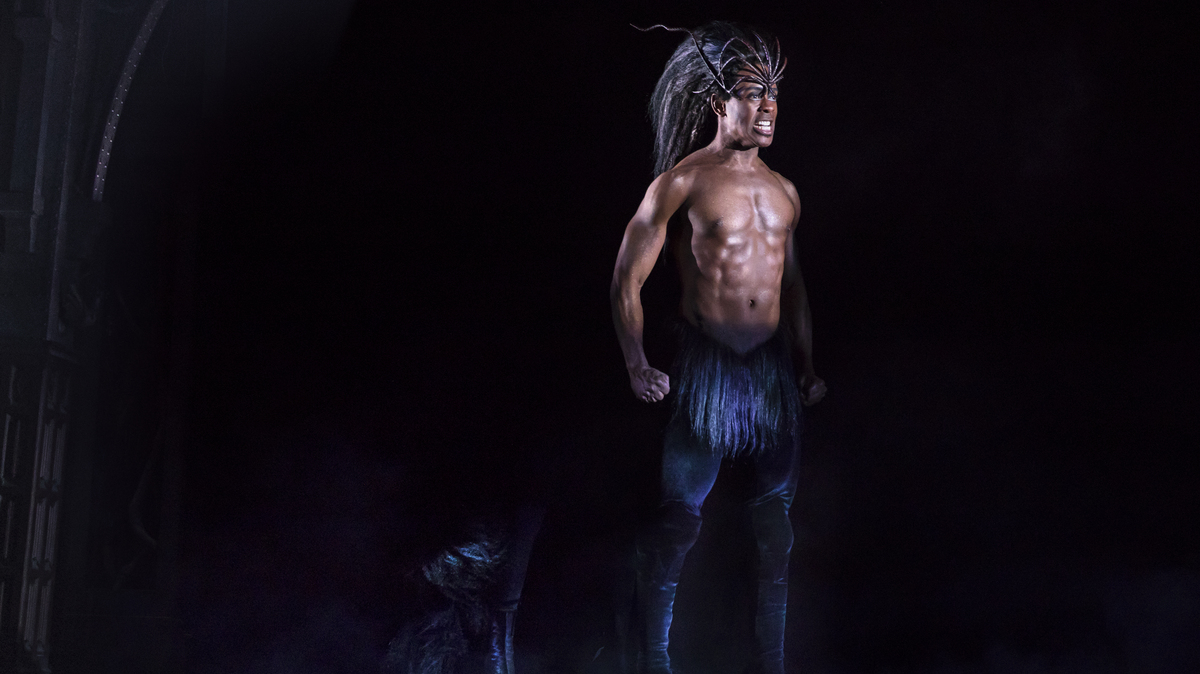 James Brown III, imposing both onstage as Bane the Centaur and behind the scenes as the movement captain.

Movement captain James Brown III — it's his job to implement Hoggett's vision — describes what the actors do as the foundation of a trust fall. "So it's the idea of, without prompting, you give me your weight, and then I'll give you my weight. And it's just about how we kind of move together in a space without direction."

Since our starting point was about exploring the emotional lives of these characters, and to be honest about these characters in a very immediate way, we didn't want to high-tech it.

Not everything in Cursed Child is this handmade. There are some fancy lighting tricks — and one effect I could swear is a digital projection, but no one will confirm my suspicions — this show, after all, was originally advertised with the tag line "Keep the Secrets." But most of the on-stage magic happens on a human level. And for producers Colin Callender and Sonia Friedman, that was an important choice.

"Since our starting point was about exploring the emotional lives of these characters, and to be honest about these characters in a very immediate way, we didn't want to high-tech it," Callender says. "To be honest," Friedman continues, "we wanted sort of good, old-fashioned, as I call it Victorian magic. Victorian theater tricks. Very simple, actually." 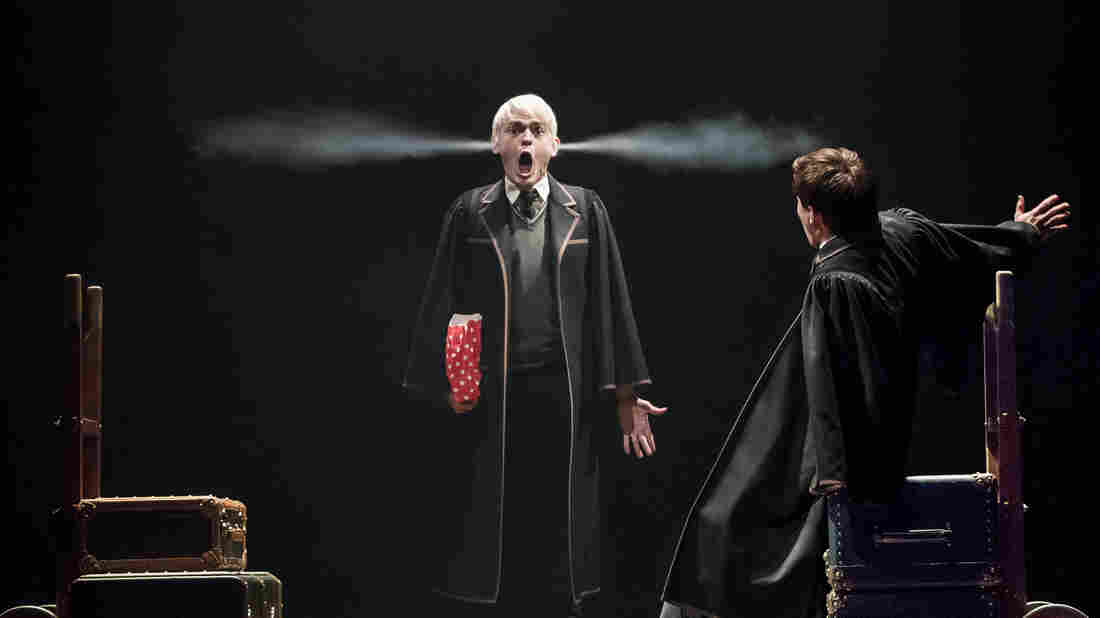 Producer Sonia Friedman describes some of the effects in the show as "Victorian theater tricks." Matthew Murphy hide caption 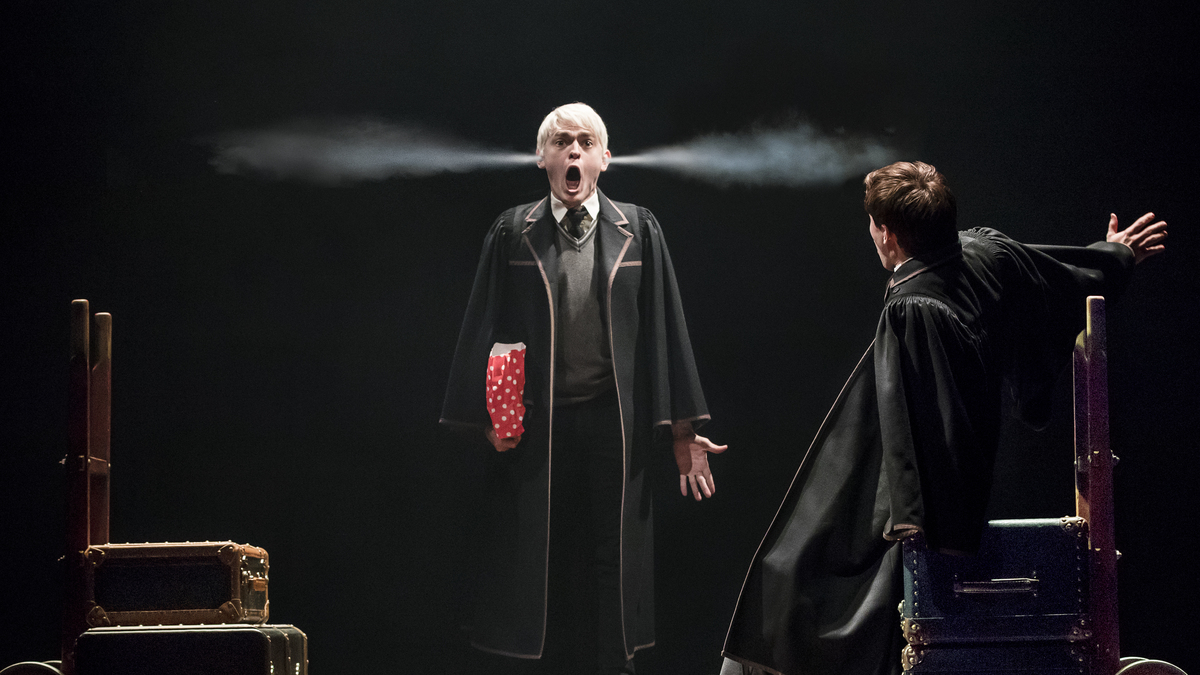 Producer Sonia Friedman describes some of the effects in the show as "Victorian theater tricks."

"That's part of the fun of the show," says Callender, "and it really is a function of all the various departments — the lighting guys, the sound, the costumes, the production, the set designer and so on, everybody working together."

That human aspect helps create a connection that draws the audience into the storytelling, Friedman says. "Storytelling was the beginning of this conversation, which is, you know, you can have a man standing on a box in the middle of a square and telling a story, and so long as that story is beautifully told, you can go to any place in the world, or indeed in the universe, and follow that story."

As we get closer to curtain time, the lobby is filling up. Everywhere I look, I see theatergoers in Hogwarts house scarves.

David Goren is here from Austin, Texas — he says he'd like to be a Gryffindor, but is really a Hufflepuff. (Me too. Me too.) And he says he has no idea what to expect on stage. "I intentionally did not research this at all, so I could be surprised."

Readers, I promise, I didn't spoil him. I kept the secrets.