Accessibility links
Gov. Cuomo Calls New York Hanukkah Attack 'Act Of Domestic Terrorism' A man stabbed people celebrating Hanukkah at the home of a rabbi in Rockland County, a New York City suburb, on Saturday night. The incident comes amid a surge of anti-Semitic violence in the region. 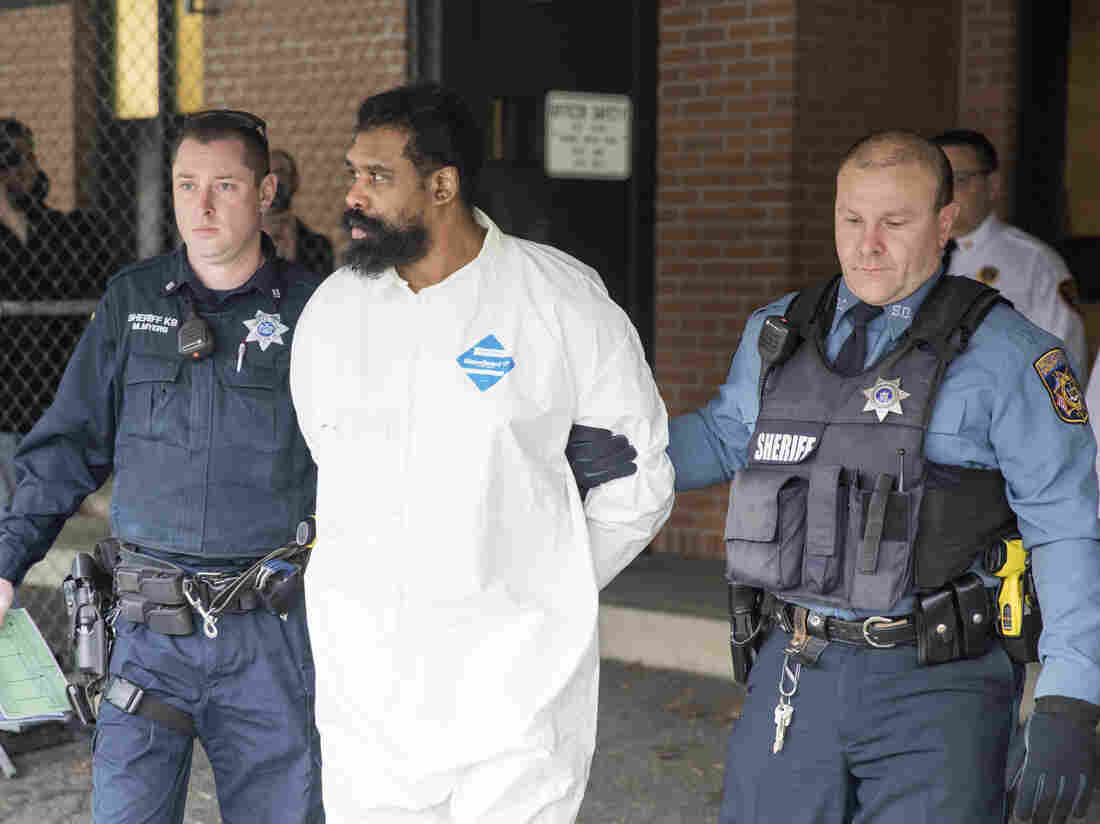 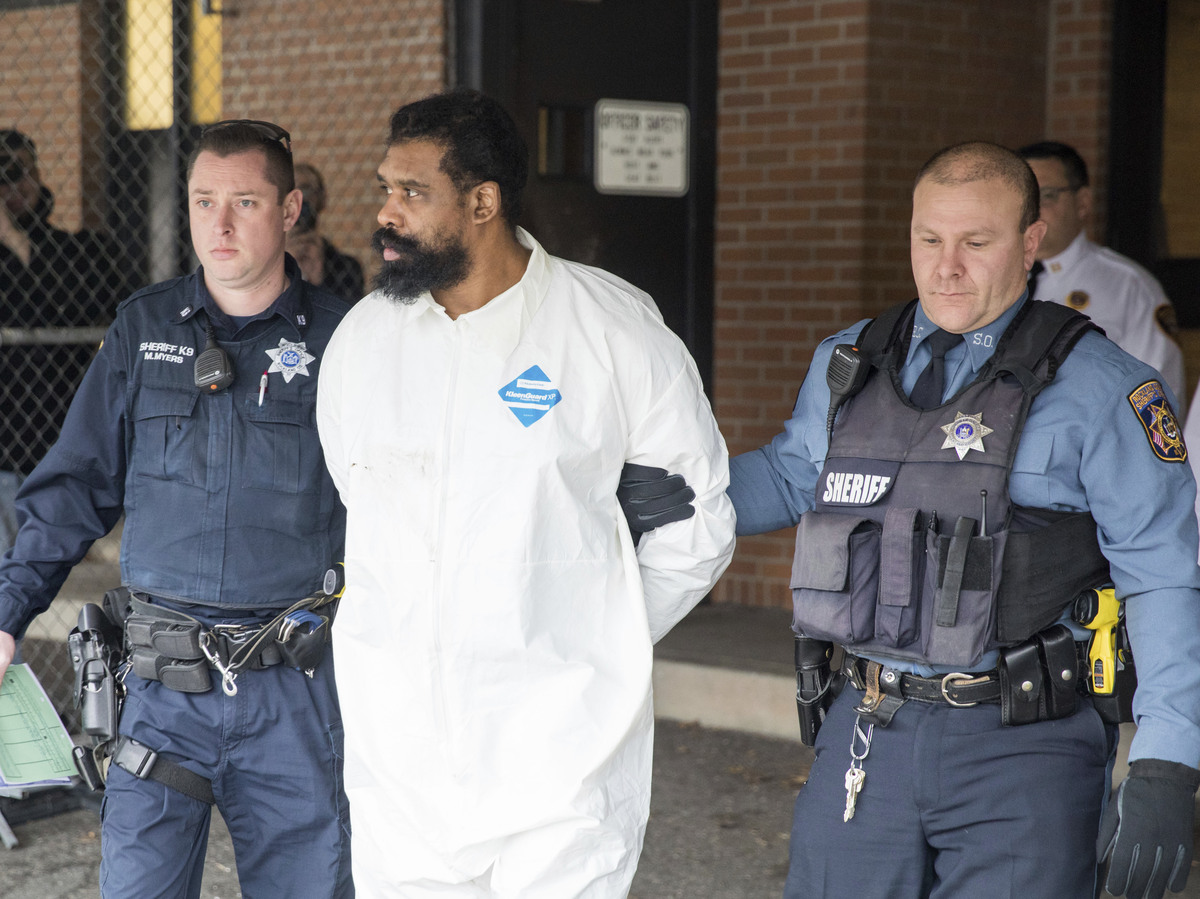 Ramapo police officers escort Grafton Thomas from Ramapo Town Hall to a police vehicle on Sunday. Thomas is accused of stabbing multiple people as they gathered to celebrate Hanukkah at a rabbi's home in the Orthodox Jewish community north of New York.

A man accused of stabbing and wounding five people at a rabbi's home in an Orthodox Jewish community in Rockland County, New York, just as they were lighting candles for Hanukkah, pleaded not guilty on Sunday to five counts of attempted murder.

Police have identified the alleged attacker as Grafton E. Thomas, 37, of Greenwood Lake, N.Y. He is currently in custody on attempted murder charges and one count of burglary.

It is unclear whether the rabbi's house was targeted, or what may have precipitated the attack. The Federal Bureau of Investigation is now probing Thomas' background to try to determine a possible motivation.

On Saturday, around 10 p.m., members of Etya Gluck's family and others gathered at the rabbi's house to observe the seventh night of Hanukkah.

A knock on the door revealed a man they did not recognize.

"His shawl came up to his nose and his hoodie came down to his forehead," Gluck, 31, of Monsey, N.Y., told NPR.

She said the man was holding something large, but people in the house mistook the object for something else.

"They thought it was an umbrella. It was in the holder, like the storybooks," said Gluck, noting that before long those gathered at the rabbi's house realized the assailant was wielding a "giant" knife.

Gluck said her two children were on their way to the rabbi's house but had not arrived before the attack.

Her husband, Josef Gluck, the building manager at the synagogue, Congregation Netzach Yisroel, which is close to the rabbi's home, was inside the home when the man stormed in carrying the knife.

Gluck said as some were fleeing the violent scene to seek shelter, her husband fought back.

But before the assailant drove away, a witness was able to take a photograph of the license plate, allowing police to track the vehicle and eventually make an arrest in New York City's Harlem neighborhood, police said.

"It was critical to the case," Ramapo Police Chief Brad Weidel told reporters on Sunday.

Authorities said two of the five victims are still hospitalized.

While officials would not attribute a motive, New York Gov. Andrew Cuomo said the attack is part of "hatred exploding" across the country.

"It is an American cancer that is spreading in the body politic," Cuomo said.

The rabbi's home where the attack took place is located about 30 miles north of New York City in an area that has a large population of ultra-Orthodox Jews.

President Trump called the stabbings "horrific," saying on Twitter, "We must all come together to fight, confront, and eradicate the evil scourge of anti-Semitism."

Standing in front of the rabbi's home on Sunday, Cuomo characterized the violent episode "an act of domestic terrorism."

"These are people who intend to create mass harm, mass violence, generate fear, based on race, color, creed. That is the definition of terrorism," Cuomo said.

In an interview with NPR's Sarah McCammon on All Things Considered, Cuomo said he wants to pass a domestic terrorism statute in New York State.

On Sunday, Thomas was arraigned and pleaded not guilty. A judge set his bail at $5 million. Thomas is now being held at the Rockland County Jail.

Aron Kohn, who was in the rabbi's house during the attack, said a Hanukkah candle had just been lit before the intruder stormed in around 10 p.m.

"He started running into the big room, which was on the left side. And I threw tables and chairs, that he should get out of here," Kohn told reporters Sunday night. "I ran into the other room because I wanted to save my life."

Earlier, Cuomo tweeted that he was "horrified" by the stabbings.

"We have zero tolerance for anti-Semitism in NY and we will hold the attacker accountable to the fullest extent of the law. NY stands with the Jewish community," said Cuomo, noting that the episode was the 13th anti-Semitic attack in New York since Dec. 8.

The attack comes amid reports of a spate of anti-Semitic violence in New York City and the surrounding area. Mayor Bill de Blasio said Friday that police would increase their presence in neighborhoods with large Jewish populations.

In the past week, there have been reports of people being punched, slapped, hit in the face with a bag, and anti-Semitic slurs being shouted.

And earlier this month, a pair of shooters attacked a kosher market in Jersey City, N.J., killing three civilians, after killing a police officer at a nearby cemetery. New Jersey Attorney General Gurbir Grewal said the evidence pointed toward "acts of hate" in the attacks, with the attackers motivated by both "anti-Semitism and anti-law enforcement beliefs."

Jonathan Greenblatt, CEO of the Anti-Defamation League, said the recent attacks mean law enforcement needs to step up protection of the Jewish community.

"Whether worshiping in synagogue, shopping in the supermarket or celebrating at home, Jews should be safe from violence," he wrote. "We need authorities to provide increased protection NOW and ensure that the full force of the law is brought down on those who perpetrate such horrific crimes."