Accessibility links
Bougainville Has Hard Talks Ahead To Split From Papua New Guinea After voting overwhelmingly for independence, the South Pacific island group now has to negotiate its separation with Papua New Guinea's government. 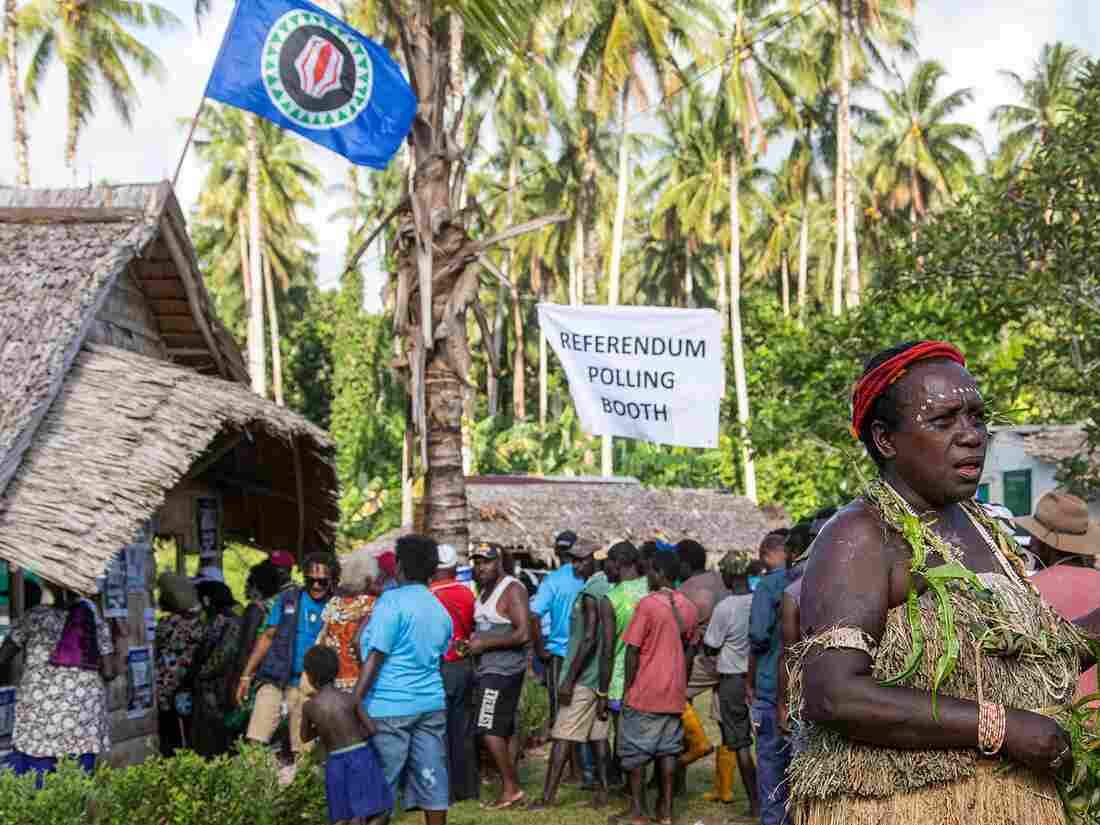 People line up to vote in a referendum on Bougainville's independence from Papua New Guinea, in the region's interim capital of Buka Town, on Nov. 25. The pro-secession vote won a landslide victory, although the vote is nonbinding. Now Bougainville's leaders have to negotiate with the PNG government. Ness Kerton/AFP via Getty Images hide caption 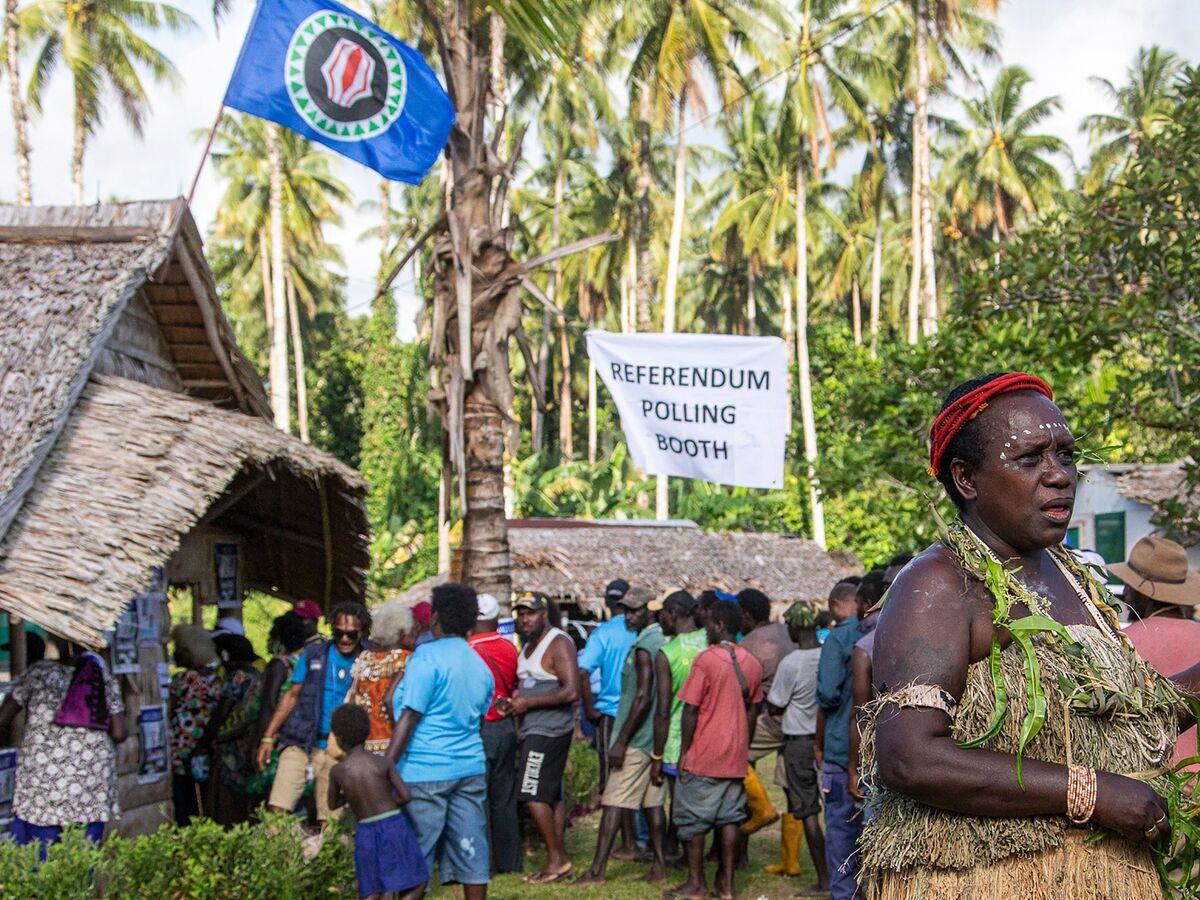 People line up to vote in a referendum on Bougainville's independence from Papua New Guinea, in the region's interim capital of Buka Town, on Nov. 25. The pro-secession vote won a landslide victory, although the vote is nonbinding. Now Bougainville's leaders have to negotiate with the PNG government.

"The people have spoken," says Albert Punghau, an official in Bougainville, speaking about the region's referendum on independence from Papua New Guinea.

After nearly three weeks of voting and counting, the results announced on Dec. 11 showed residents of the South Pacific island group overwhelmingly voted to break away from Papua New Guinea and form their own nation.

The referendum asked Bougainvilleans if they wanted greater autonomy or full independence. Nearly 98% of voters chose independence, with 87.4% voter turnout, according to the referendum commission.

After the results, "We all shouted and cheered and erupted as if there was thunder," Punghau, Bougainville's minister of peace agreement implementation, tells NPR.

He adds that he and his colleagues sang the regional anthem through tears. The school assembly hall where they gathered, in Bougainville's interim capital of Buka Town, was filled with "joy and happiness," he says.

Now, hard work begins. The referendum is nonbinding. Bougainville, with nearly 250,000 residents, does not automatically become an independent country. Its government has to negotiate the terms of separation from Papua New Guinea, whose Parliament would then have to approve the agreement. The process could take months or even years.

Meanwhile, Australia, New Zealand, China and the United States are closely watching as this Pacific island region has become the latest battleground for diplomatic influence between the West and China.

The referendum marks "a historical moment," Punghau says, for Bougainvilleans who've lived through decades of unrest and displacement. He says the vote is meant "to correct the mistakes of the past" tracing back to when Bougainvilleans were enslaved by British and German colonists in the 1700s and 1800s.

Named after French explorer Louis Antoine de Bougainville, the region is a smattering of islands and atolls sitting nearly 600 miles east of Papua New Guinea's mainland. Though only about 3,600 square miles, Bougainville is one of the most resource-rich areas of PNG, abundant in copper, gold and tuna.

Years of not seeing the same profits as the rest of PNG from the extraction of the resources on their territory have helped fuel the region's decades-long calls for independence.

"Our land was used for mining without our consent and we never benefited from it," Punghau says. "To put it short: We were exploited, dehumanized and finally, finally we are free."

Many Bougainvilleans also say there are cultural and ethnic differences between their people and those on the mainland. Punghau says they identify as Solomon Islanders, "not Papua New Guinean."

Bougainville has attempted to declare independence twice before. The first time was in 1975 when PNG was granted independence from Australia, but Bougainville's declaration was not recognized internationally. It tried again in 1990, during a brutal civil war. Papua New Guinea's military set up a blockade to prevent all food, medical supplies and fuel from reaching Bougainville. The blockade was lifted in 1994; the civil war officially ended in 1998.

The Australia-based Lowy Institute puts the death toll during the civil war at 10,000-15,000, "mostly through preventable disease and lack of medicine."

“With your support I have trust and confidence. Now, we need to complete the job” - Minister for Peace Agreement Implementation Hon. Albert Punghau thanks donors to @UNPeacebuilding for their support towards furthering peace by peaceful means in #Bougainville. pic.twitter.com/RyR8ZIkMSL

A 2001 peace agreement between PNG and Bougainville, brokered by New Zealand, established the Autonomous Bougainville Government, which has operated in the region since. It has its own executive, legislative and judicial branches, its own police force and the authority to make many decisions without oversight from the PNG government. The peace deal also said Bougainville could hold an independence referendum by mid-2020.

"So, you could see this as a moment of collective healing," says Gianluca Rampolla, the United Nations resident coordinator for Papua New Guinea.

This time, Bougainville's independence bid could be different. The two sides have been planning for this moment since signing the peace agreement nearly 20 years ago. Rampolla says consensus is very important to Melanesian culture and a high level of trust has developed between the two governments. "The conditions are best at this point for [PNG and Bougainville] to be able to come to a mutually consensual agreement on the final political status of the region," he says.

Talks are expected to begin in January. Bougainvillean leaders will have to negotiate with the Papua New Guinea government the terms of such aspects as borders, trade, diplomacy and security forces. Then PNG's Parliament must ratify the agreement.

"[Bougainvilleans] want this divorce to be as amicable as possible," says Stewart Patrick, a senior fellow with the Council on Foreign Relations. He says it will be an uphill battle, but "they're definitely not doomed."

Birth of a new Bougainville

A host of issues confront newly independent countries, leaving a patchwork of results over the years.

For example, countries coming out of conflict sometimes find it difficult to build political institutions like political parties and courts, Patrick says. He points to South Sudan, which gained independence from Sudan in 2011, and its continued struggles among various factions.

Before the civil war began, Bougainville was a wealthy province with "highly favourable socio-economic indicators relative to the rest of the nation," according to a 2018 report by the Papua New Guinea National Research Institute. It had the second highest per capita income of PNG's 20 provinces, the highest life expectancy, lowest infant mortality and second-lowest proportion of the population without any schooling.

But since its economy collapsed during the military blockade, Bougainvilleans have depended mostly on agriculture and small scale mining. While official stats about Bougainville's economy are not available, the PNG National Research Institute estimates that the region has a per-capita GDP of about $1,100 and relies heavily on money from the central government.

While there has been talk of reviving mining in Bouginaville post-independence, developing a balanced and diverse economy that isn't overly reliant on a single revenue source will also be important, Patrick says.

When a country suddenly has an economic windfall, it "often doesn't breed good development," Patrick says. East Timor, another small island nation just north of Australia, is an example, he says.

After gaining independence from Indonesia in 2002, East Timor's young government bet on offshore oil and gas for revenue. The Bayu-Undan oil and gas field has generated billions of dollars but not enough jobs, as Bloomberg News reported. Now East Timor is struggling to diversify its economy, while trying to combat rampant corruption.

Even though Papua New Guinea's government supported holding the referendum — it was legally bound to do so by the peace deal — its leaders are already signaling they would prefer Bougainville not gain full independence. In the days following the referendum result, PNG's Prime Minister James Marape flew to Bougainville and suggested a scenario in which "self-rule is not harmed and PNG's desire for national unity is embraced."

It will be difficult for Bougainville's leaders to accept a result less than independence, says Anna Powles, a senior lecturer in security at New Zealand's Massey University.

"The negotiations will be protracted and the PNG negotiating team will be offering a compromise deal," Powles says. Bougainville's leaders will have to manage expectations and frustrations that might build up in the region.

Australia and New Zealand are watching closely what happens next, especially as China spends more money in the region. The U.S. helped fund Bougainville's referendum in a bid to limit China's engagement with what could be the world's newest nation. Still, Powles says Chinese diplomats have been in Bougainville for a number of years, trying to build relationships with key politicians and making offers around mining, fisheries and agriculture to help build the region's economy.

China has also been courting other regions across the Pacific that have shown a strong desire for independence, such as France's New Caledonia, Indonesia's West Papua province and Papua New Guinea's New Ireland, Powles says. Some of these places may now become emboldened by Bougainville's example.

"If Bougainville becomes independent, it's going to amplify other self-determination calls in the Pacific," Powles says. This could not only mean "more chess pieces in the region," she says, but also Pacific island leaders who are feeling less supported by global powers, especially when it comes to the existential threat of climate change, could have more options — and maybe even better partners — to work with moving forward.

Punghau says he hopes that when Bougainville becomes a country — for him, it is a matter of when and not if — that major powers like China, Russia and the U.S. will see it as an equal partner.

For now, he's going to concentrate on negotiating independence from Papua New Guinea.