Accessibility links
China Sentences Christian Leader To 9 Years In Prison Wang Yi is one of China's most prominent independent Christian leaders. Authorities arrested him a year ago in a relentless suppression of religious practice in China. 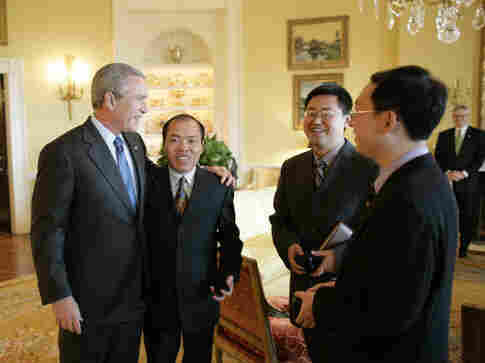 Wang Yi, a leader in one of the most well-known Christian congregations in China, has been quietly sentenced to nine years in prison, according to a statement on the website of the Intermediate People's Court of Chengdu Municipality.

The sentencing is the latest incident in an ongoing crackdown on organized religion in China. Early Rain Covenant Church, which Wang founded in 2008, attracted about 500 followers and was considered one of the most influential "underground churches" in China, operating independently of the state.

Wang was charged with "subverting state power." He, his wife, Jiang Rong, and about 100 congregants were detained last December after police raided the church during a Sunday evening service. Authorities said the church violated religious regulations because it was not registered with the government. Another prominent Protestant congregation with nearly 1,500 followers, Zion Church in Beijing, was raided and shut down last September.

Most of Early Rain's congregants were eventually released after a period of days or months. Several congregants have since escaped to Taiwan and are applying for asylum in the U.S.

Until last year, Early Rain was one of the most influential Protestant "underground" congregations, which are technically illegal because they remain unregistered and out of government control. Scholars estimate that of China's 60 million or so Christians, about half attend unregistered churches rather than their state-sanctioned counterparts.

China has previously sentenced prominent dissidents or activists in closed trials over holidays such as Christmas or announced multiple sentencings on the same day in an effort to minimize media attention.

A former human rights lawyer and blogger, Wang Yi converted to Christianity in 2005. His work as an activist earned him an invitation to the White House the following year, where Wang met President George W. Bush as part of a delegation of Chinese figures advocating for greater religious freedoms and civil liberties.

China nominally guarantees freedom of religion. But in the past six years, it has arrested believers, shut down several prominent Christian churches and detained or imprisoned hundreds of thousands of Muslims in the western region of Xinjiang.