Accessibility links
Angry Mob Sets Fire To Reception Area At U.S. Embassy In Baghdad The protesters set fire to a reception area inside the compound as Marines fired tear gas to push them back. The angry demonstration follows a series of U.S. airstrikes inside Iraq and Syria. 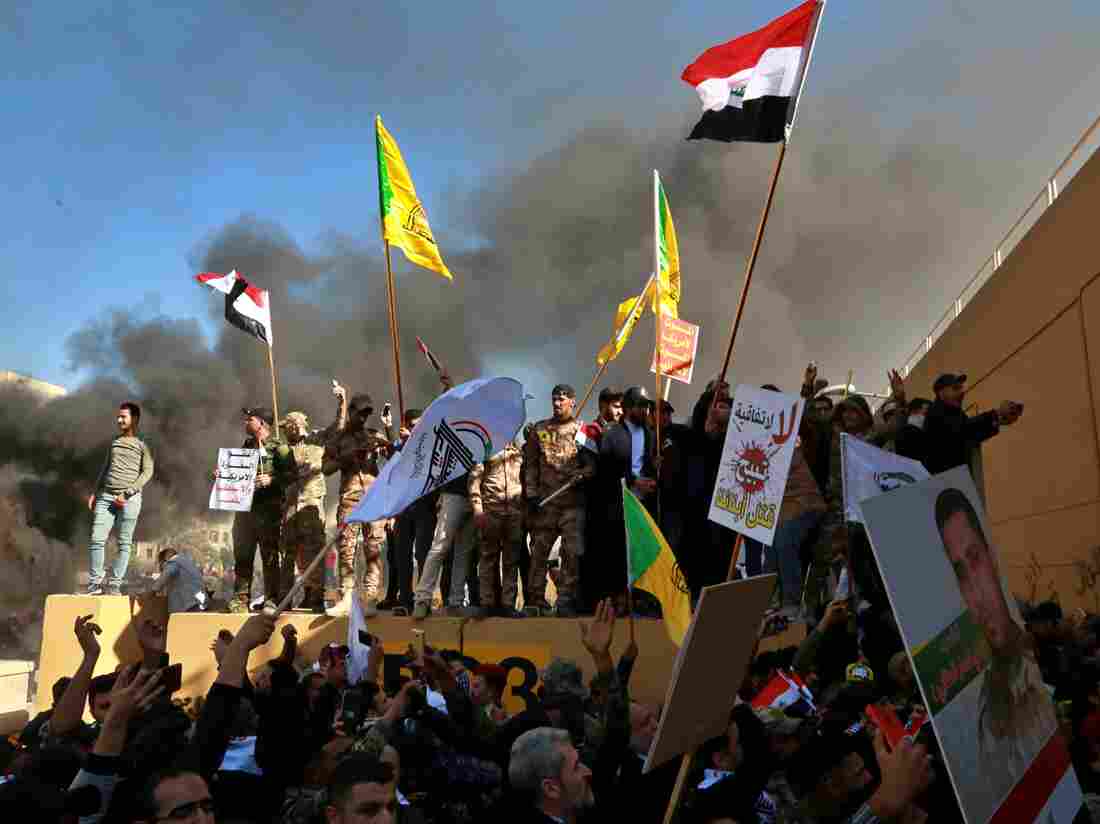 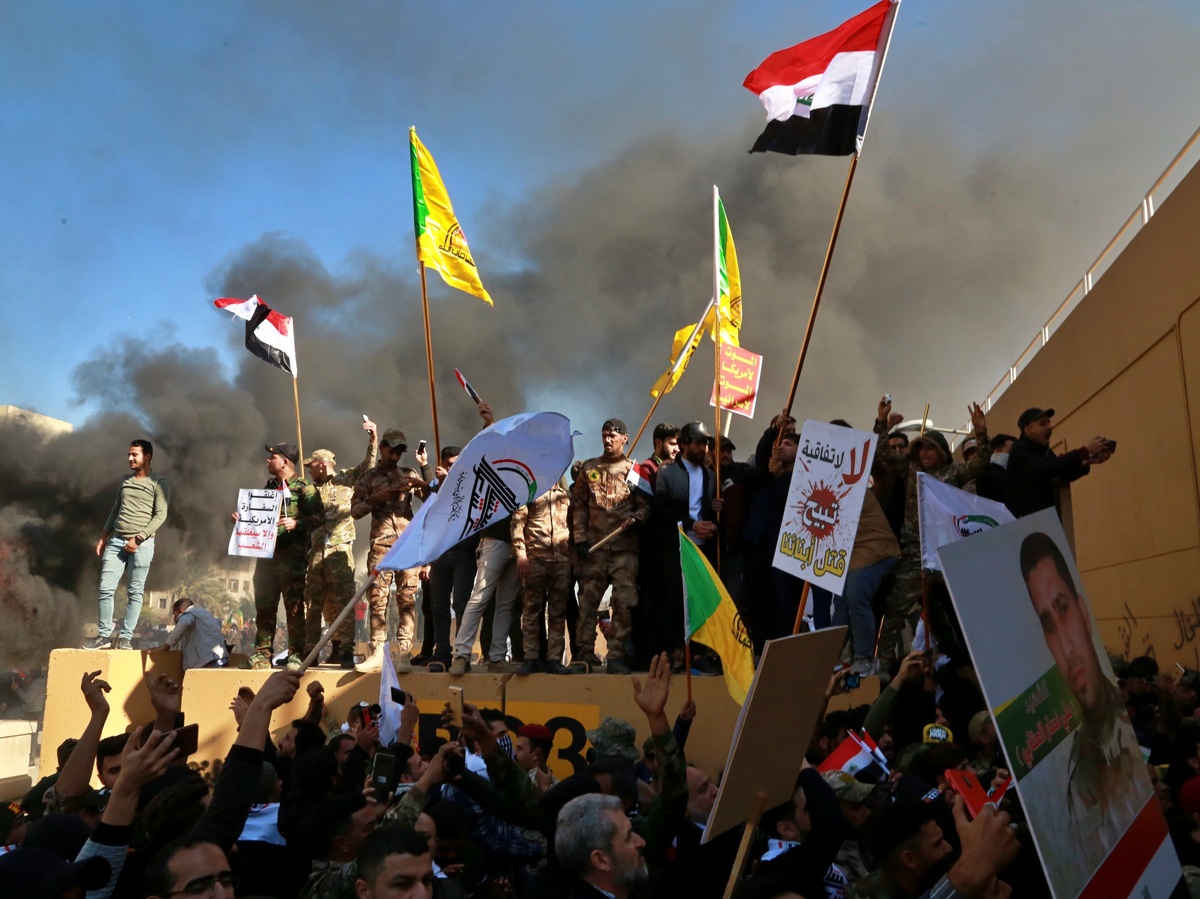 Protesters set fires in front of the U.S. Embassy compound in Baghdad on Tuesday.

An angry mob protesting American airstrikes in Iraq and Syria tried to storm the U.S. Embassy in Baghdad on Tuesday, smashing through the main entrance and setting fire to a reception area as Marines guarding the compound fired tear gas to hold them back.

The protesters reportedly were made up of supporters of a Shia group, the Kataib Hezbollah militia, that was targeted in the Sunday airstrikes, which killed about two dozen fighters. The U.S. strikes were carried out as a retaliation against the group for the killing of an American contractor in Iraq on Friday. Kataib Hezbollah called for retaliation after the strikes but has denied any involvement in the contractor's death. 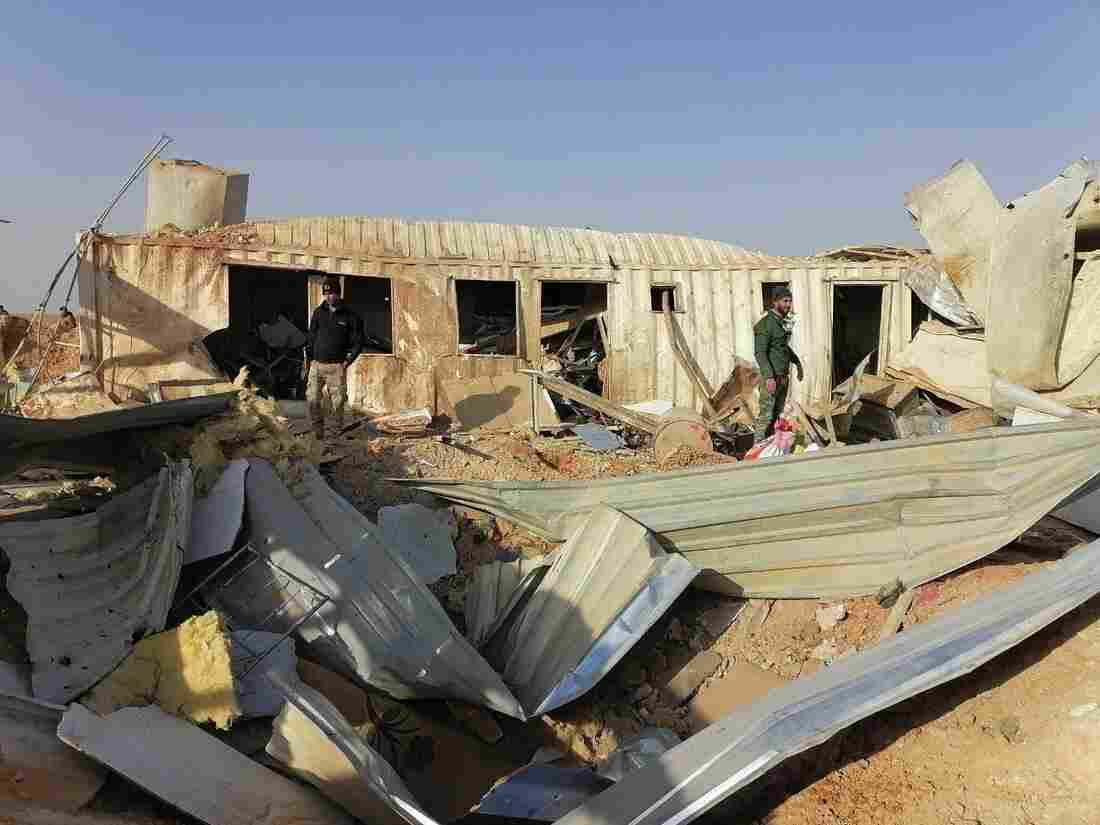 Fighters from the Kataeb Hezbollah militia inspect the destruction of their headquarters on Monday in the aftermath of a U.S. airstrike in Qaim, Iraq. AP hide caption 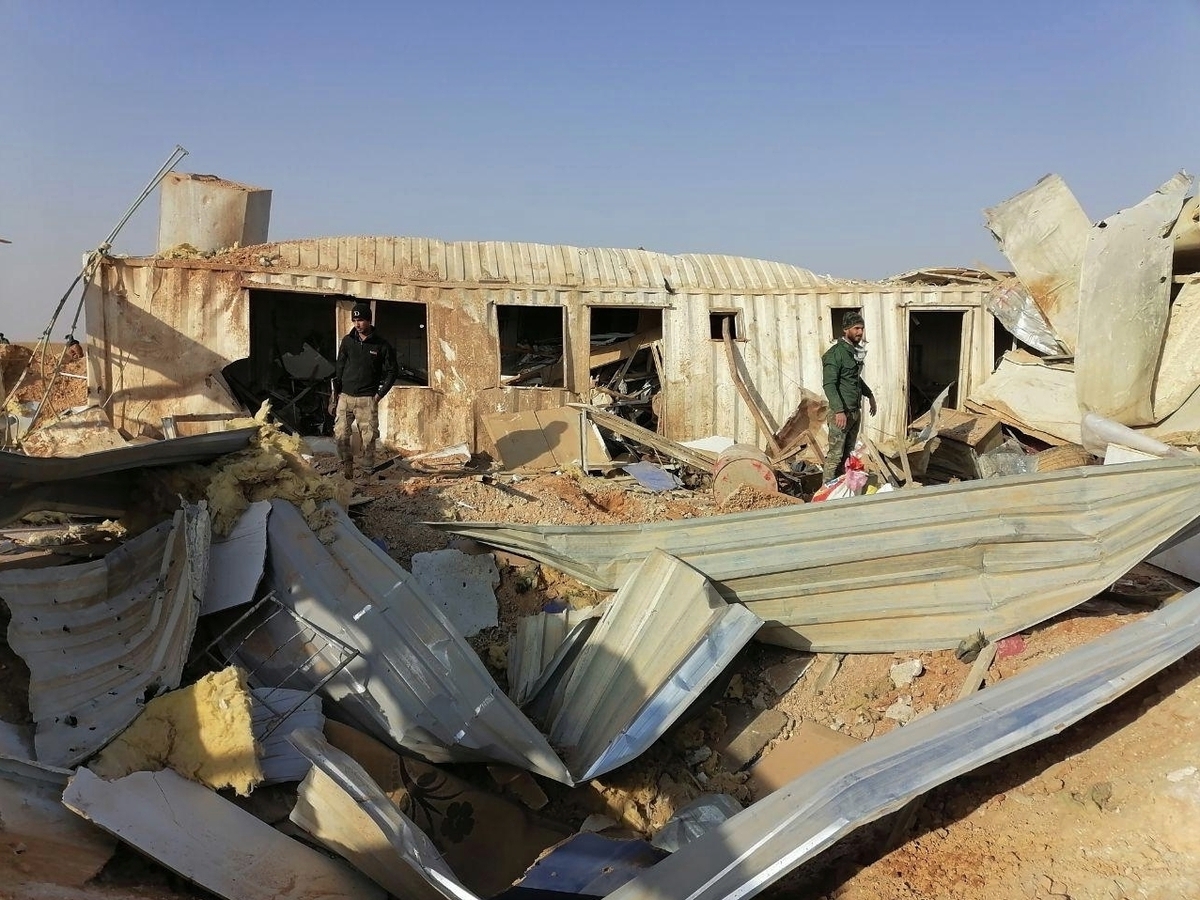 Fighters from the Kataeb Hezbollah militia inspect the destruction of their headquarters on Monday in the aftermath of a U.S. airstrike in Qaim, Iraq.

The sprawling, heavily fortified U.S. Embassy compound in the Iraqi capital covers 104 acres. It was not immediately clear whether the protesters had managed to breach anything but the outermost ring of security.

Earlier, protesters gathered carrying what they said were coffins of some of the fighters killed in the airstrikes. They marched near government buildings and then to the embassy, where they lit fires to show their anger, chanting, "America, leave, leave!"

Iran killed an American contractor, wounding many. We strongly responded, and always will. Now Iran is orchestrating an attack on the U.S. Embassy in Iraq. They will be held fully responsible. In addition, we expect Iraq to use its forces to protect the Embassy, and so notified!

On Tuesday morning, President Trump tweeted: "Iran killed an American contractor, wounding many. We strongly responded, and always will. Now Iran is orchestrating an attack on the U.S. Embassy in Iraq. They will be held fully responsible. In addition, we expect Iraq to use its forces to protect the Embassy, and so notified!"

After the U.S. launched the series of airstrikes inside Iraq and Syria over the weekend, the government in Baghdad condemned the action as an attack on its sovereignty and said it would summon the U.S. ambassador.

"We stress that Iraq is an independent country, and its internal security takes priority, and serious attention, and will not be allowed to become a battlefield, or a route for launching attacks," Iraq's Foreign Ministry said in a statement about what it planned to tell the U.S. ambassador.

It added that Iraq planned to discuss the future presence in the country of the U.S.-led coalition fighting ISIS.

KH and more than two dozen other Iranian-backed militias have a complicated position within Iraq. The paramilitary has fought against ISIS and is formally part of Iraq's security forces — though U.S. officials have raised concerns about whether the Iraqi government actually has control over it and other Iranian-backed groups.

A U.S. State Department official said the airstrikes were "designed to protect American forces and American citizens in Iraq, but it is also aimed at deterring Iran."

As NPR's Tom Bowman reported, KH "has been for months now firing mortars and rockets at U.S. forces at locations throughout Iraq." The U.S. government blames it for the recent attack on an Iraqi base near the city of Kirkuk in which a U.S. contractor was killed. The attack on the base used by U.S. and Iraqi forces, which involved more than 30 rockets, also injured four U.S. service members and two Iraqi troops, according to the Defense Department.

The U.S. military says it launched "precision defensive strikes" against three of the militia's facilities in Iraq and two in Syria. Jonathan Hoffman, an assistant to the secretary of defense, said in a statement that the locations "included weapon storage facilities and command and control locations that KH uses to plan and execute attacks on [Operation Inherent Resolve] coalition forces." Some of these strikes led to large secondary explosions, Bowman reported.

Hoffman said that KH has a strong link to Iran's elite Quds Force and said it has received weapons and other support from Iran that it turned on coalition forces.

"The U.S. and its coalition partners fully respect Iraqi sovereignty, and support a strong and independent Iraq," Hoffman stated. "The U.S., however, will not be deterred from exercising its right of self-defense."

"Our battle with America and its mercenaries is now open to all possibilities," KH said in a statement after the strikes, according to The Associated Press. "We have no alternative today other than confrontation and there is nothing that will prevent us from responding to this crime."

Previous KH strikes had not caused serious injuries. But they were enough to worry U.S. officials. In May, as Bowman reported, "Secretary Mike Pompeo abruptly canceled a trip to Germany and flew to Baghdad because, I'm told, intelligence showed the possibility of a large attack on U.S. forces, presumably by these militias." That threat did not materialize at the time.

Iraqi Prime Minister Adel Abdul-Mahdi's office said in a statement that he received a call from U.S. Defense Secretary Mark Esper shortly before the airstrikes and asked for them to be called off. Abdul-Mahdi decried the strikes as a unilateral act by the U.S.-led coalition that is considered a violation of Iraq's sovereignty.

A State Department official told reporters that the U.S. is not worried about the potential consequences of the strikes. The official added that it's the Iraqi government's "responsibility and duty to protect us, and they have not taken the appropriate steps to do so." The State Department reports that there have been 11 attacks on Iraqi bases that host coalition forces in the past two months. "This obviously is a campaign," the official said.

The Iranian Embassy also published a statement in Iraqi local media, calling the strikes against militias a violation of Iraqi sovereignty.