Accessibility links
Profile: Juilliard Movement Coach Moni Yakim The movement coach has taught at Juilliard for 50 years. Stars of stage and screen credit him with helping them create physically demanding roles by manipulating their bodies. 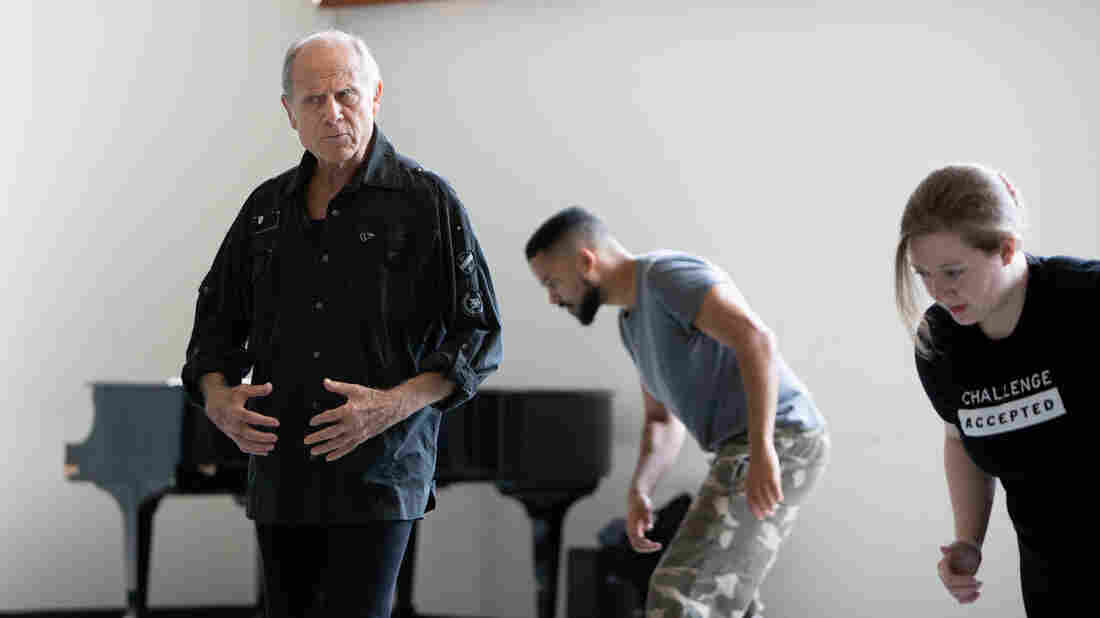 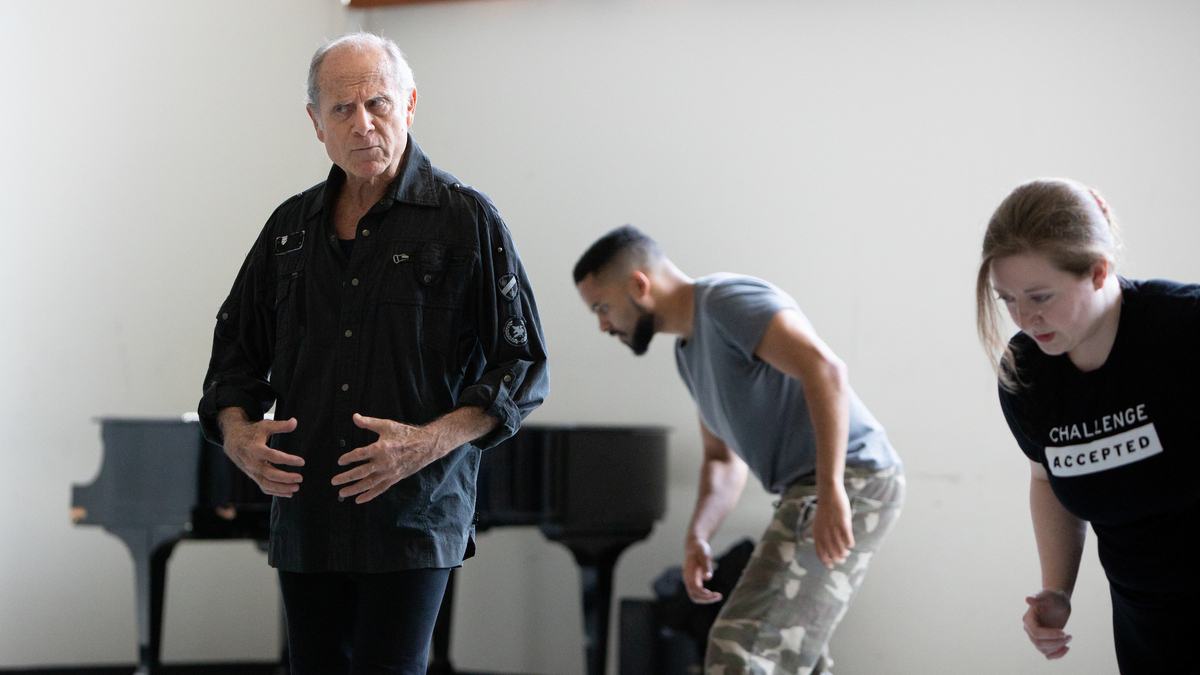 Moni Yakim teaches a movement class at Juilliard in May 2019.

Moni Yakim has taught movement at the Juilliard School for more than half a century. His students include Oscar Isaac, Jessica Chastain, Adam Driver, Anthony Mackie and Kevin Kline. In the documentary Creating a Character, all of those actors describe Yakim as one of their formative influences.

Everyone who takes his class is forever changed by it.

"Everyone who takes his class is forever changed by it," says Isaac, who still consults with Yakim when he takes on seminal roles. He credits his former teacher with helping him prepare to play the lead in Hamlet, which ran at the Public Theater in New York City in 2017, and the titular role in the Coen Brothers' Inside Llewyn Davis. When he was cast in that breakout part, he spent an afternoon with Yakim considering how to embody a destitute folk singer from the early 1960s.

"We just started moving, talking about the burden of life," Isaac says. They decided that Isaac's character moved like someone "walking against the wind, someone who has a lot of weight on them." The work with Yakim was vital to his award-nominated performance, Isaac says: "For me, that was a major part of playing that character, holding onto those physical things."

Yakim began acting in his native Israel longer ago than he cares to admit. In the 1950s, he moved to Paris and studied mime under French masters Etienne Decroux and Marcel Marceau. "I loved how the story was told exclusively through movement," he says.

He moved to the United States, where he founded his own company, and in 1968, John Houseman tapped him to join the faculty at the nascent Juilliard school. He is now the longest-serving member of the faculty.

On Becoming Llewyn Davis, A Hero Who Excels At Failing

Students do not take Yakim's class until their second years, when their jam-packed schedules include instruction in speech and textual analysis. Those disciplines provide important background for budding actors, but as Yakim points out, the body is one of an actor's most essential tools. "Embody means the entire being," he says. "The psychological aspect, emotional, mental, physical."

A lot of Yakim's class is physical training. Students run, stretch and lift themselves up as Yakim urges them on. But there is playfulness as well. In one exercise, a student will do a small, contained movement, like slapping her palms together. Then her classmates riff off it. It's like improv without the words.

Yakim says this creative exercise is an important part of an artist's training. "In acting you have to use a lot your imagination," he says. "And the imagination does not go naturally to places where the body cannot go there. The more you free the body, the freer the imagination is to go wherever it needs to go."

The more you free the body, the freer the imagination is to go wherever it needs to go.

Some of his students have used that training to become marquee names. Oscar Isaac's Star Wars co-star Adam Driver also studied under Yakim. "[He] was a delight because this guy worked his tail off," Yakim says. "After a class when everyone was exhausted, he would do 20 pushups. He was ruthless about the work."

Yakim's class is also part of the challenging audition process at Juilliard's drama program. Every year, 1,800-2,000 people apply in person in San Francisco, Chicago and New York. That pool is winnowed to 40-50 men and women, who come to the New York City campus for tryout weekend. They all take Yakim's class, and ultimately, just 18 are selected.

One of them is Arianna Gayle Stucki, a native of Utah who studied at New York University as an undergraduate and is pursuing her MFA at Juilliard. "It was [Yakim's] class that made me say: I need to come to this school," she says. "Because it was so intense and also so joyful."

Her classmate, Gabriela Saker, is from Cuba. She says that because Yakim keeps a quick tempo in class, she doesn't have the opportunity to overthink. It's made her less self-conscious. "You get rid of your inhibitions, you can make a fool of yourself, but also you take the work seriously," she says.

That day, Moni Yakim instructed Saker and the other students to get out of balance — but not to fall. She did fall. But that seemed to be the point: finding the limit of what she could do, and resolving to push past it next time.