Accessibility links
Number Of Homeless Homicide Victims Rises in Los Angeles Homelessness in Los Angeles is becoming more dangerous. One percent of LA's population lives on the streets or in shelters, but in 2019, homeless people made up about 17% of its homicide victims. 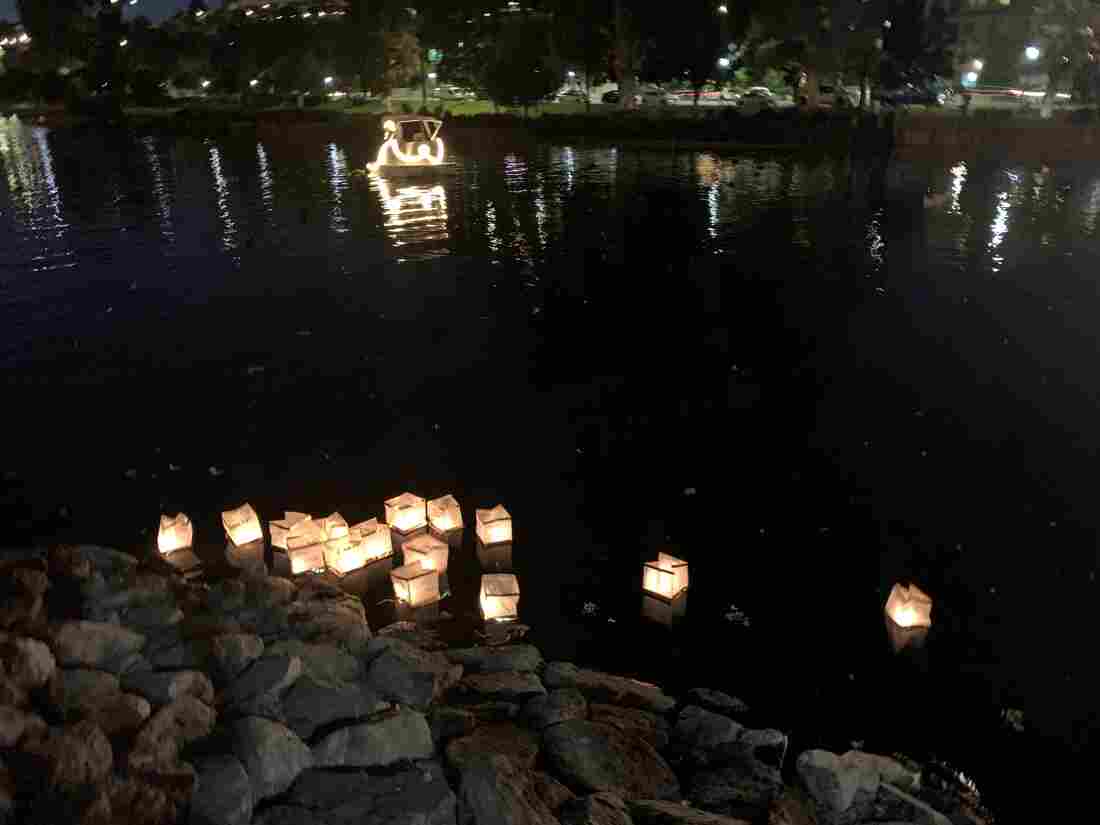 During a vigil this month for people who died while homeless in Los Angeles in 2019, organizers floated candlelit lanterns on Echo Park Lake. Anna Scott/KCRW hide caption 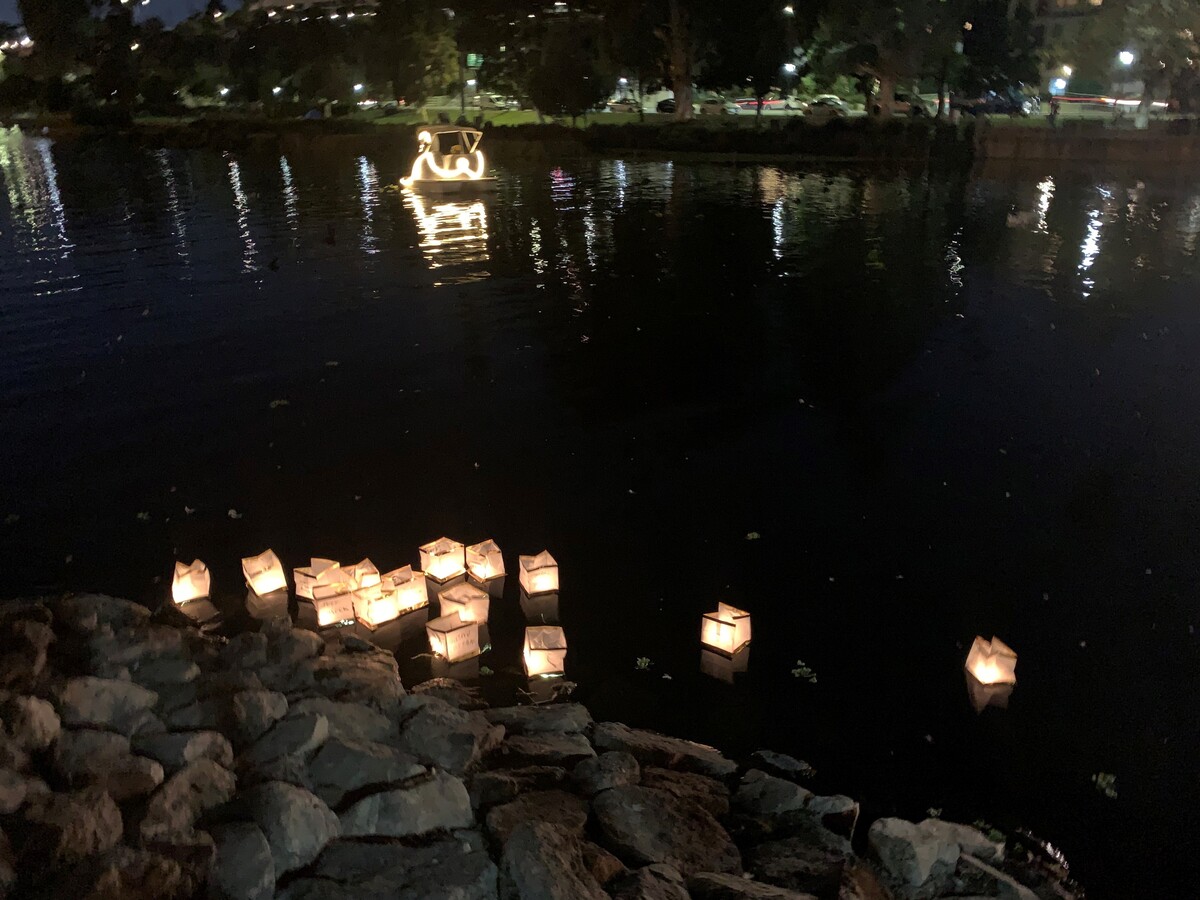 During a vigil this month for people who died while homeless in Los Angeles in 2019, organizers floated candlelit lanterns on Echo Park Lake.

According to the Los Angeles Police Department's latest numbers, 42 unhoused people have been the victim of homicide in 2019. That's up from 39 in 2018, 29 in 2017 and 22 in 2016, even as the overall number of homicides has decreased in recent years.

People who live outdoors "are the most vulnerable people in our city to be victimized by crime," said LAPD Commander and Homeless Coordinator Donald Graham. In about two-thirds of the homicides with homeless victims in 2019, the suspects were also homeless.

Living outdoors doesn't make people violent, Graham says, but so many strangers sharing sidewalks can lead to conflicts. If someone does have violent tendencies, the easiest target is often another unhoused person.

Court Ruling Limits What Cities In Western U.S. Can Do To Address Homelessness Dec. 16, 2019

"Everyone involved here is suffering from at least a minor form of PTSD," he said. "When there is a fight over territory or property, all of that becomes so magnified. That's what our detectives are seeing out there."

In 2019, the city of Los Angeles experienced a 16% jump in the number of people living on the streets, in cars or in shelters over the previous year, according to the latest count by the Los Angeles Homeless Services Authority, a city-county agency.

"The ultimate solution to the homeless population's safety is to house them," said Graham.

One of those 42 homeless homicide victims was Fred Contreras Jr., or Freddy, as family and friends called him. He was 49, a Dodgers fan, a father and a grandfather.

Contreras' body was found outside a post office in LA's Echo Park neighborhood, near downtown, early one morning in March. His sister Edna Contreras remembers seeing the discovery in the local news.

"It said, 'A homeless man was found on the sidewalk,' " she said, shaking her head. "He had a name."

Freddy Contreras died from blunt head trauma, according to the LA County medical examiner-coroner's office, and the case was ruled a homicide.

To be sure, such violent attacks are only one of many physical risks that go along with living outdoors. On Dec. 18, a reportedly homeless man in his 50s was found dead outside Los Angeles City Hall. This happened just three days before National Homeless Persons' Memorial Day, an occasion marked in Los Angeles with multiple vigils for the nearly 1,000 people who died without housing throughout the county in 2019 — not just homicide victims.

One event, held at LA's Echo Park Lake, was put together by a few local advocacy organizations, including the SELAH Neighborhood Homeless Coalition, a group of mostly nonprofessional volunteers.

The gathering was inspired by the death of one particular young man named Ralph, said SELAH co-founder Darius Derakshan.

"He had a medical condition, which, of course, living on the streets makes it very tough to treat," Derakshan said. "We want to bring awareness to his life and make sure everybody knows that everyone's life in this community is important."

Two of the event's organizers held a banner displaying the names of 18 people who lived on the streets near Echo Park Lake and died in 2019. The banner also had pictures of some of the dead, including Contreras.

After a series of speeches, participants placed candlelit lanterns on the lake — one for each person listed on the banner. The little square lanterns clustered at the edge of the water instead of floating away. They represented a fraction of the city's homeless homicide victims and an even smaller fraction of everyone who died unsheltered in and around LA in 2019.

Watching the proceedings nearby, Contreras' sister Edna said she and her brother grew up in this neighborhood. She recalled their father once forcing them to release a pet turtle into this very same lake.

"My brother didn't want to let the turtle go," she said. "I miss him so much every day. Every day."