Accessibility links
U.S. Sends Forces As Protesters Try To Enter U.S. Embassy Compound In Baghdad Security forces fired tear gas at demonstrators as President Trump called on Iraq to intervene with force. The protesters are angry about a series of U.S. airstrikes on an Iranian-backed militia. 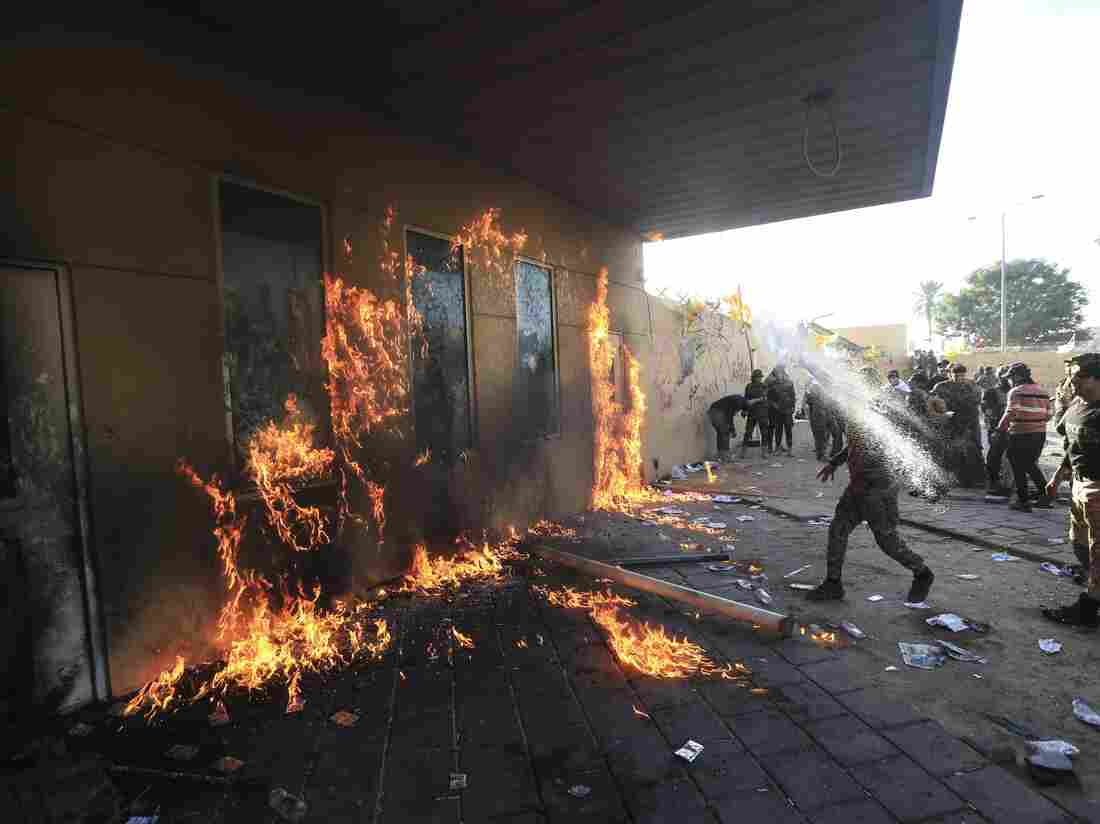 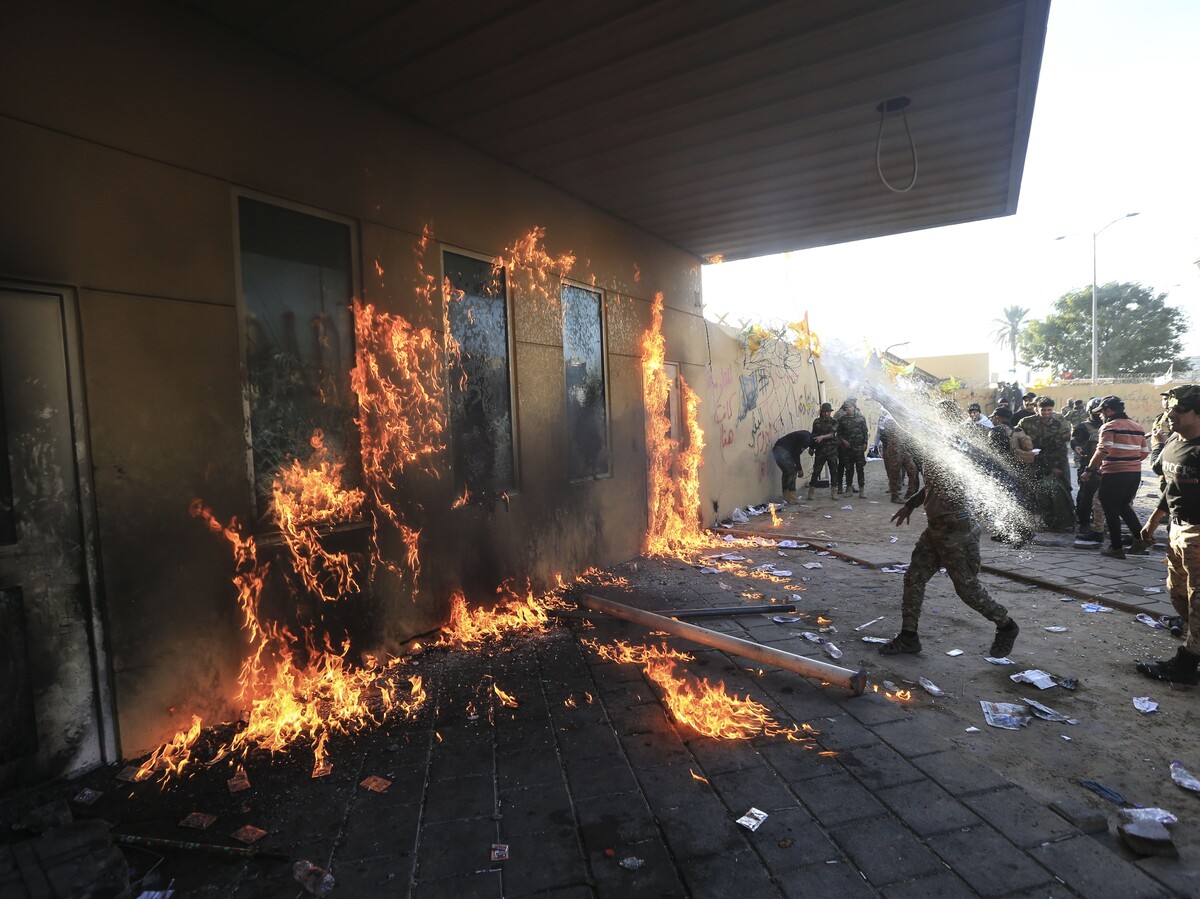 Outraged Iraqi protesters, angered by U.S. strikes on armed battalions belonging to an Iranian-backed militia, attack the U.S. Embassy in Baghdad on Tuesday.

The Pentagon is deploying another 750 soldiers following an attack by Iranian-backed militia members and their supporters on the U.S. Embassy in Baghdad on Tuesday. Marines in the compound fired tear gas at the crowds who threw rocks and set fires.

President Trump called on Iraq to intervene with force. Tuesday evening, Defense Secretary Mark Esper announced the deployment of an infantry battalion from the Immediate Response Force of the 82nd Airborne Division.

"Approximately 750 soldiers will deploy to the region immediately, and additional forces from the IRF are prepared to deploy over the next several days," Esper said in an emailed statement. "This deployment is an appropriate and precautionary action taken in response to increased threat levels against U.S. personnel and facilities, such as we witnessed in Baghdad today. The United States will protect our people and interests anywhere they are found around the world."

Earlier, a State Department spokesperson said the protesters had not breached the embassy and there were no plans to evacuate.

The spokesperson added that the U.S. ambassador had been traveling and is returning to the embassy.

About 100 Marines arrived in Baghdad to shore up the embassy's Marine contingent said officials at U.S. Central Command, which oversees the Mideast region. The officials tell NPR's Tom Bowman that a pair of Apache attack helicopters have flown over the protesters in a "show of force."

"We're watching the situation carefully," Navy Capt. Bill Urban, a CENTCOM spokesman, told Bowman. "We're confident (the embassy) is secure." Another U.S. official said that Iraqi forces are "engaged" in pushing demonstrators back but were not there when the protest began. 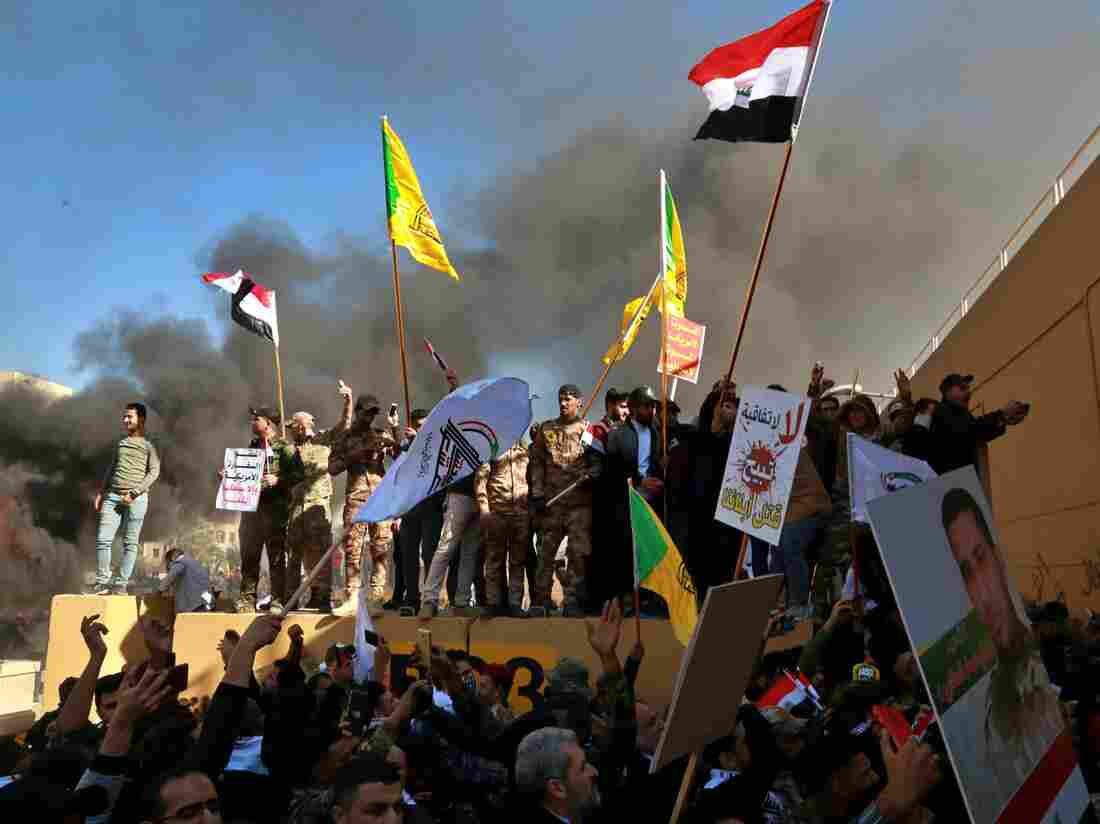 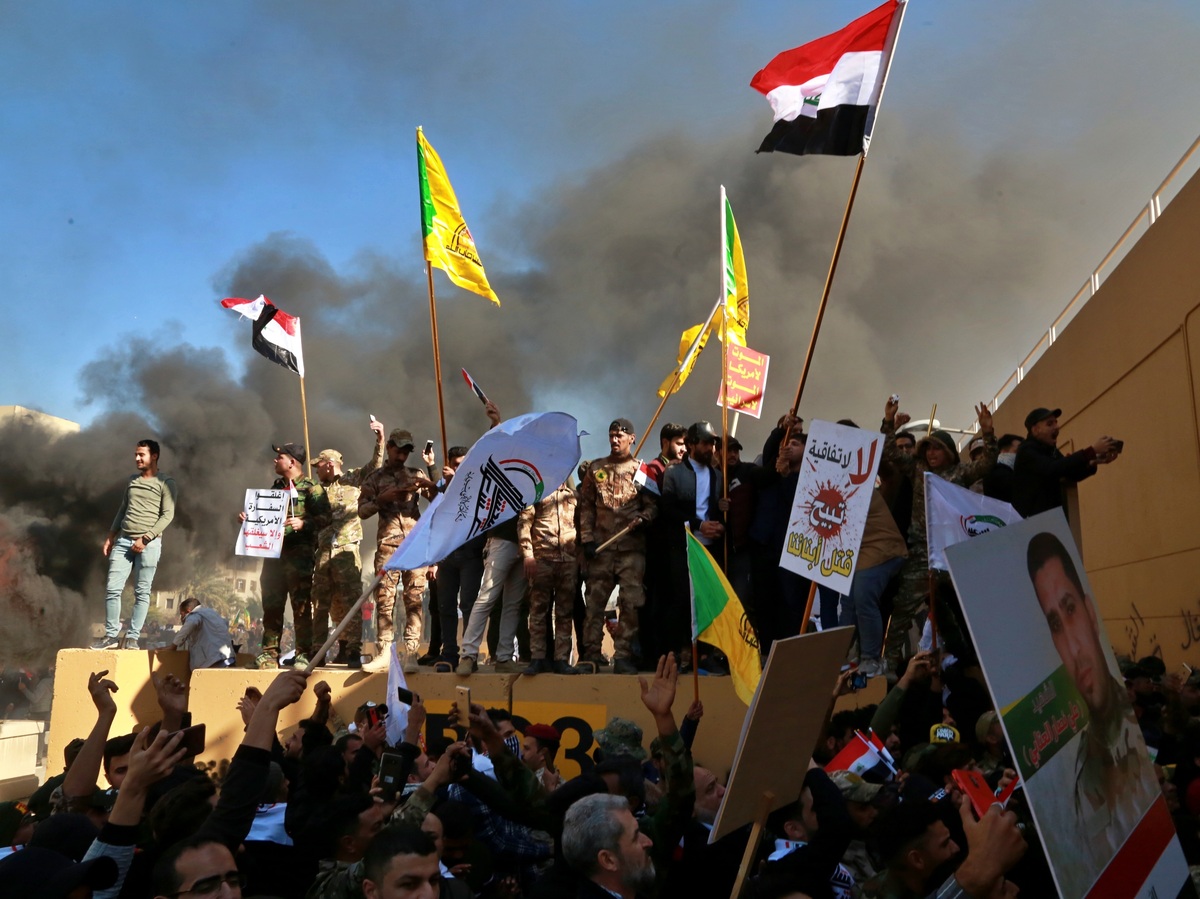 Protesters set fires in front of the U.S. Embassy compound in Baghdad on Tuesday.

The massive and highly fortified embassy compound also contains offices, residences and other facilities for the staff.

The protesters are angry about a series of U.S. airstrikes against the Iranian-backed Kataib Hezbollah militia on Sunday that killed at least 25 people.

The group is formally part of Iraq's security forces, though U.S. officials have questioned whether Iraq has control over it. KH has been staging attacks on bases used by U.S.-led coalition forces. One such attack on Friday killed a U.S. military contractor and wounded two U.S. service members.

"We responded defensively to the Iranian proxy attack that killed an American citizen and wounded American and Iraqi soldiers," Secretary of State Mike Pompeo tweeted. "Now, Iranian backed groups are threatening our Embassy in Baghdad."

Pompeo added that he spoke with Iraq's president and prime minister to "reiterate their obligation to protect our U.S. personnel and property." Trump accused Iran of orchestrating the attack and said, "We expect Iraq to use its forces to protect the Embassy."

According to a State Department readout of Pompeo's calls, the Iraqi officials "assured the Secretary that they took seriously their responsibility for and would guarantee the safety and security of U.S. personnel and property."

The Associated Press spoke to Yassine al-Yasseri, Iraq's interior minister, at the scene. According to the wire service, he said he viewed the attack as a product of the U.S. strikes. "This is one of the implications," he said. "This is a problem and is embarrassing to the government."

There were no immediate reports of casualties from the embassy attack.

The protest started after funerals of some of the militia members killed by U.S. airstrikes.

Photos and videos from the scene showed angry crowds smashing windows, throwing rocks and tipping over cars as smoke and flames rose from inside the sprawling compound. Video posted by Washington Post reporter Mustafa Salim showed crowds pushing into one of the compound's main gate, as Iraqi forces try to push them back with tear gas. Another video from Salim shows a small security outpost on fire outside the compound's walls.

As the AP reported, a person on a loudspeaker pleaded for the crowd to stop trying to enter the compound. "The message was delivered," he said in an effort to turn back the protesters. Security personnel also fired stun grenades at the protesters, according to Reuters.

It does not immediately appear that protesters made it very far within the embassy compound. According to eyewitness reports from the AP, after they pushed their way in, "protesters stopped in a corridor after about 5 meters (16 feet), and were only about 200 meters away from the main building. Half a dozen U.S. soldiers were seen on the roof of the main building, their guns were pointed at the protesters."

Protesters told AP reporters that they planned to stage a sit-in and were pitching tents outside the compound's walls. As night fell in Baghdad, the protest group appeared far smaller than earlier in the day.

Earlier this year, Pompeo ordered all non-emergency embassy personnel to leave Iraq. According to the Pentagon Inspector General's report to Congress, there are 352 staff members between the U.S. Embassy in Baghdad and the Consulate General in Irbil as of October – down from 563 before Pompeo's order. There are also more than 1,000 contractor staff, according to the report.

Prior to the attack on the embassy compound, Pompeo said in an interview that the airstrikes served to protect U.S. citizens in Iraq and were also aimed at deterring Iran. "Our mission continues to try and get the Islamic Republic of Iran to behave like a normal nation," he said.

The State Department has said that the Iranian-backed militia targeted in the airstrikes receives weapons and other support from Iran's elite Quds Force. The airstrikes Sunday also hit two militia position in Syria.

Iraqi Prime Minister Adel Abdul-Mahdi's office has said that he spoke to the U.S. Secretary of Defense prior to the U.S. airstrikes and asked him to call them off. He has criticized the strikes as a violation of Iraq's sovereignty.

Mass protests in Iraq have been happening since October — and one of the main causes of these demonstrations has been frustration at Iranian meddling in Iraq's affairs. This has put demonstrators at odds with the numerous Iranian-backed militias in Iraq. Last month, protesters set fire to Iran's consulate in the city of Najaf.

"The Iranian backed demonstrations in front of the U.S. Embassy should not be confused with the Iraqi protesters who have been in the streets since October to decry the corruption exported to Iraq by the Iranian regime," a State Department spokesperson said.

Farhad Alaaldin, an analyst with the Iraq Advisory Council, told NPR that Baghdad appears increasingly caught in the tensions between the U.S. and Iran.

"It's clear this is the U.S.-Iran conflict playing out in Iraq and Iraq is becoming an arena for that conflict," he said. "And it is unfortunate. The Iraqis always wanted and the Iraqi policymakers wanted to be neutral to this conflict as much as possible."

But, he says recent events are making it more difficult for Iraq to stay out of the dispute — "and the Iraqis would be paying a heavy price for it."