Accessibility links
It's New Year's Eve. Let's Drop Something From The Sky "The things we choose to drop are visual symbols about the importance of the event or the place," sociology professor Michelle Janning said. That may mean dropping a giant Moon Pie down a building.

It's New Year's Eve. Let's Drop Something From The Sky

It's New Year's Eve. Let's Drop Something From The Sky 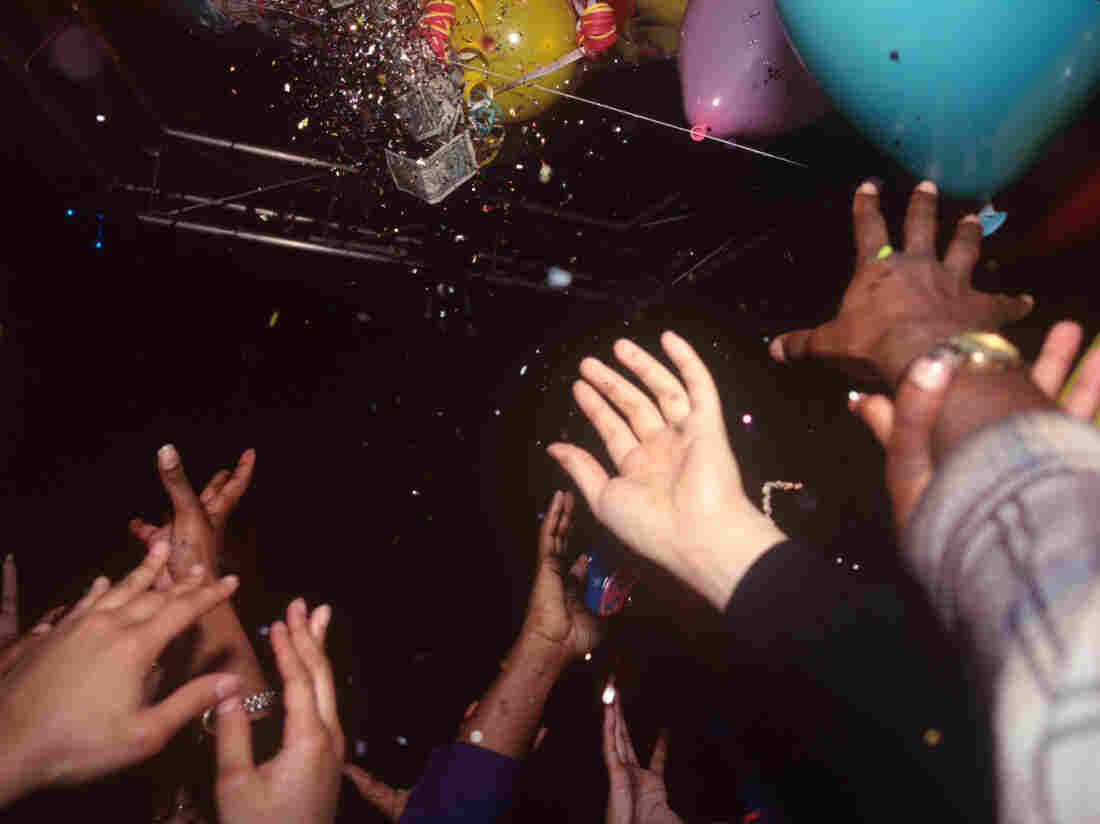 Some countries have already rung in the new year, but across the U.S., cities are getting ready to say hello to 2020 in myriad strange ways. Andrew Lichtenstein/Corbis via Getty Images hide caption 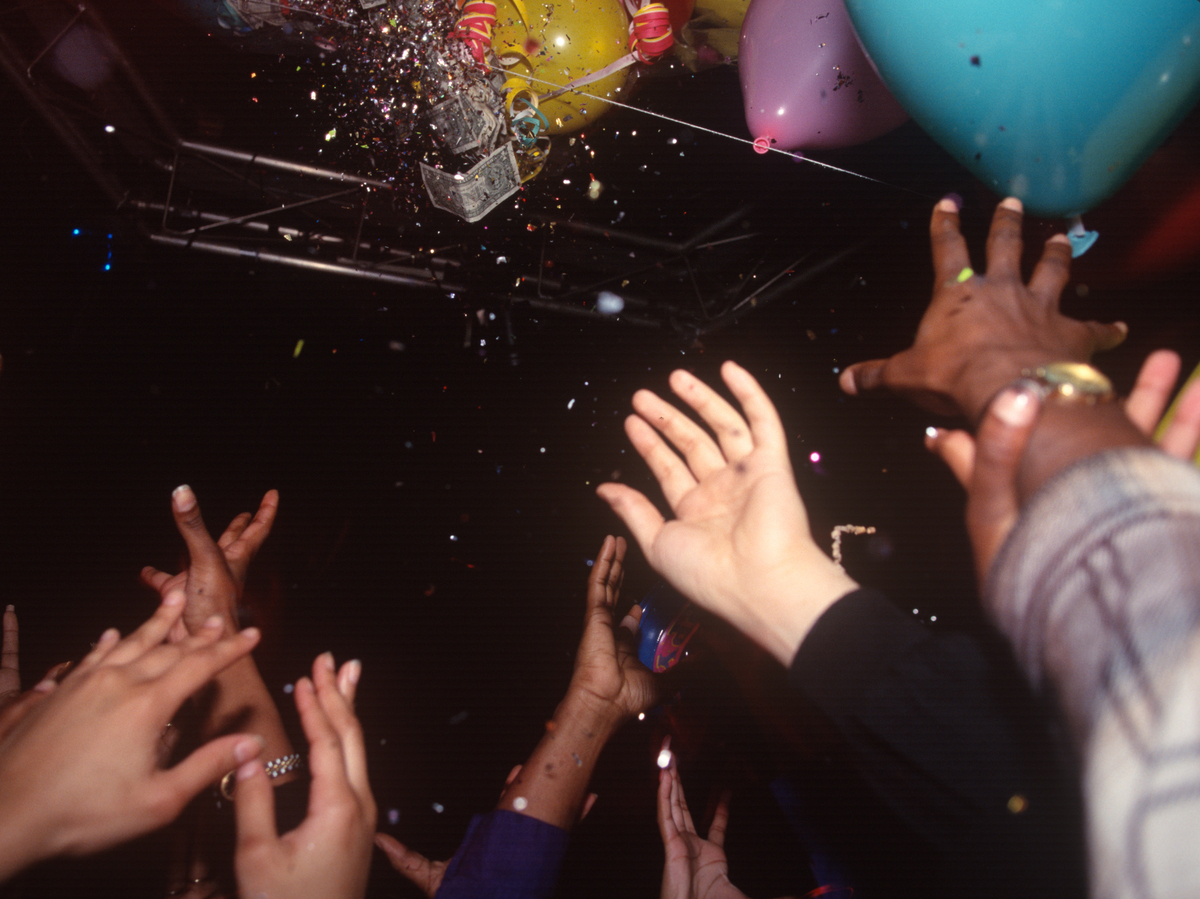 Some countries have already rung in the new year, but across the U.S., cities are getting ready to say hello to 2020 in myriad strange ways.

As the new year rolls across the globe — first in independent Samoa, Tonga and Kiribati, the first countries to ring in the new year, and ending, in a poetic circle-of-life-kind of way, in American Samoa — in the U.S., people are getting ready to usher in 2020 by looking up and watching a giant object fall from the sky.

The most famous, of course, is the dazzling lighted New Year's Eve ball that slides down a pole in New York's Times Square.

The first ball dropped more than 100 years ago. It was 6 feet in diameter, made of iron and wood, weighed 700 pounds, and contained 100 lightbulbs, Business Insider reported.

But the "time ball" — born out of a maritime tradition to help ships at sea keep accurate time — has become much more high tech since then.

The one that will delight more than a billion people across the world tonight, is 12 feet in diameter, weighs 11,875 pounds, contains 2,688 Waterford crystals, and 32,256 LED lights. 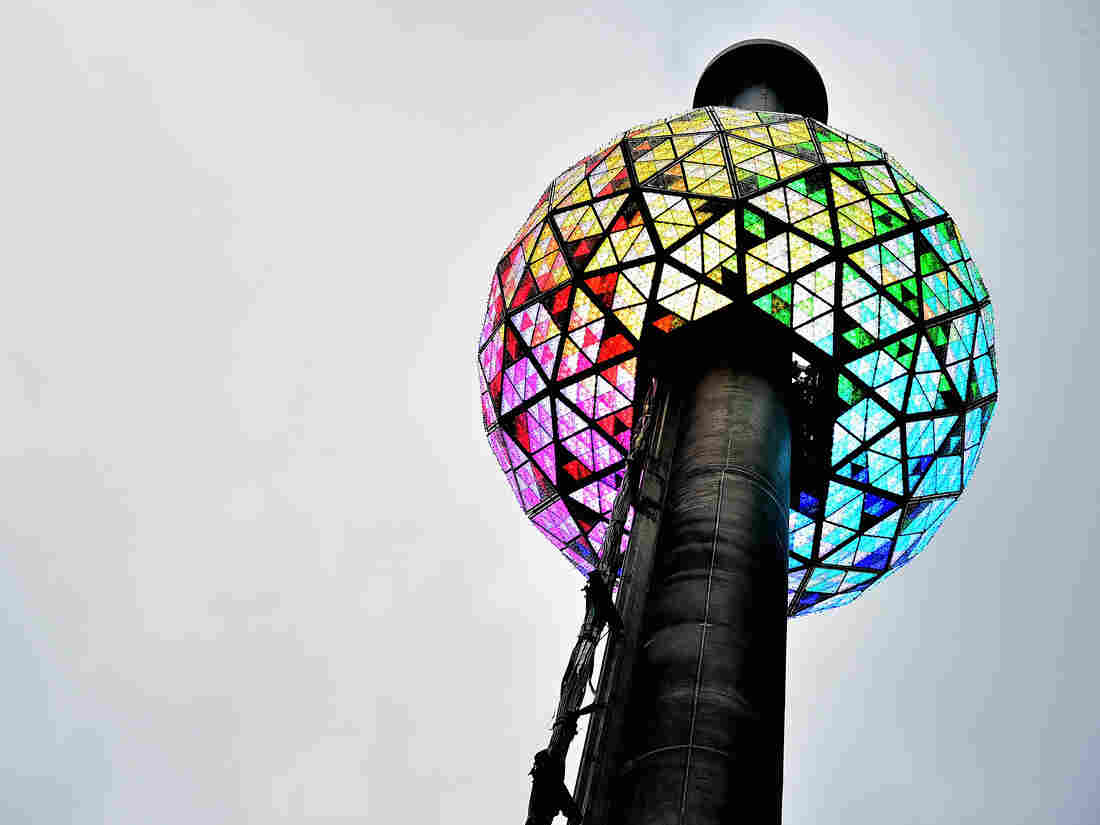 The Philips-made ball was tested at One Times Square on Dec. 30, 2016 in New York City. Theo Wargo/WireImage hide caption 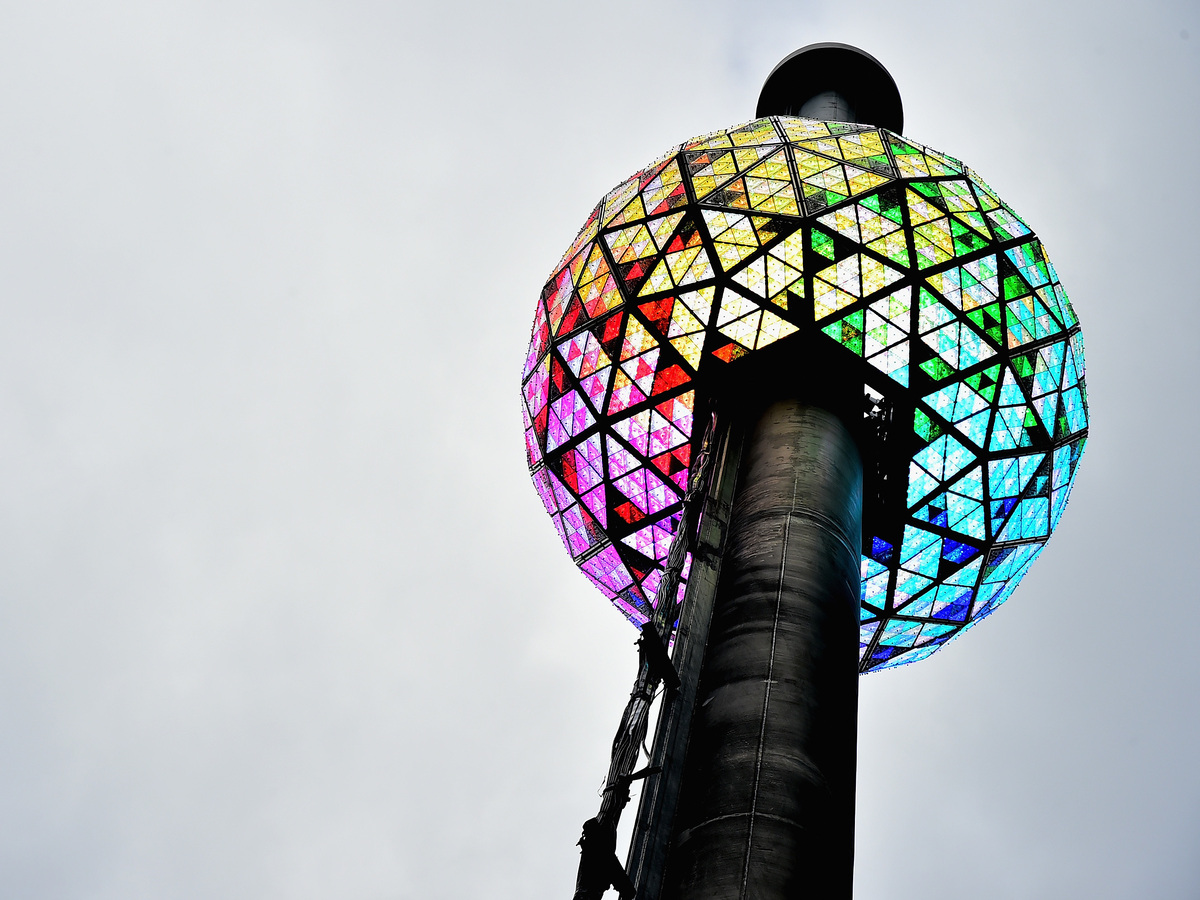 The Philips-made ball was tested at One Times Square on Dec. 30, 2016 in New York City.

The New Yorker reports, it is "an aluminum, geodesic skeleton covered in wedge-cut crystals and more than thirty-two thousand light-emitting diodes, which are capable of creating billions of kaleidoscopic color patterns."

It is the largest crystal ball in the world.

Yet, not everyone is equally mesmerized by the 19th-century-inspired contraption. 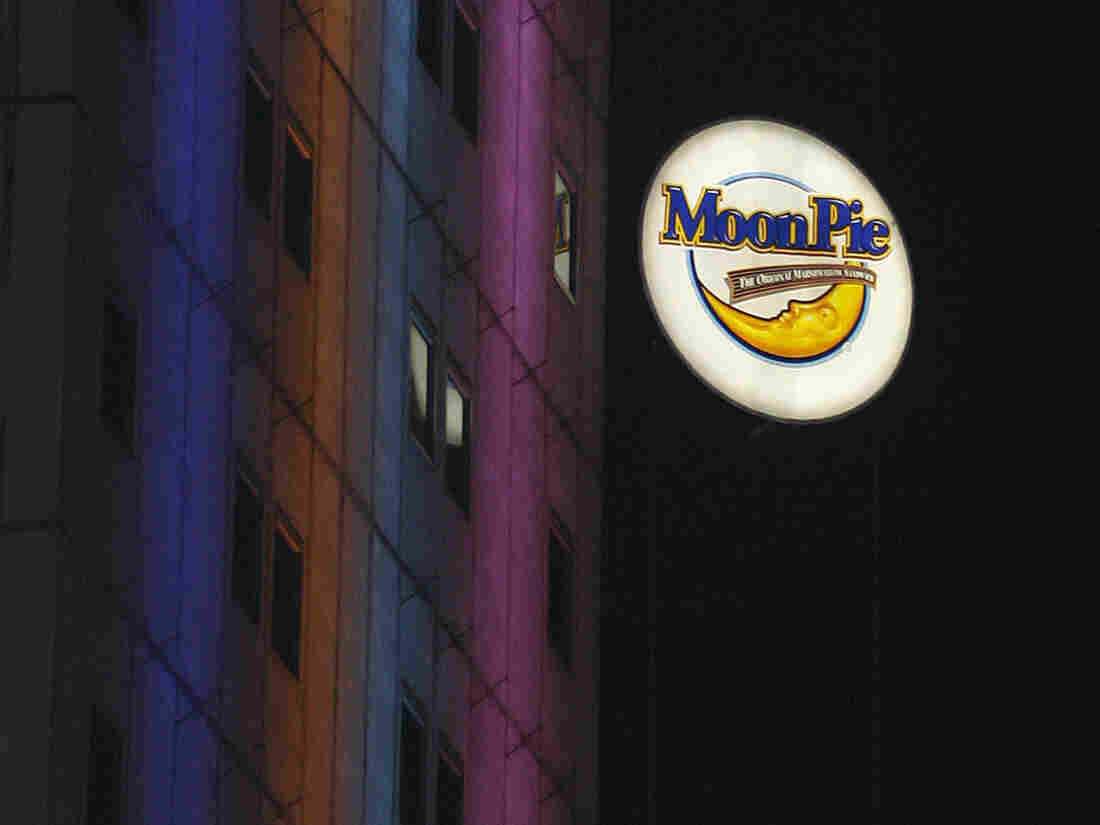 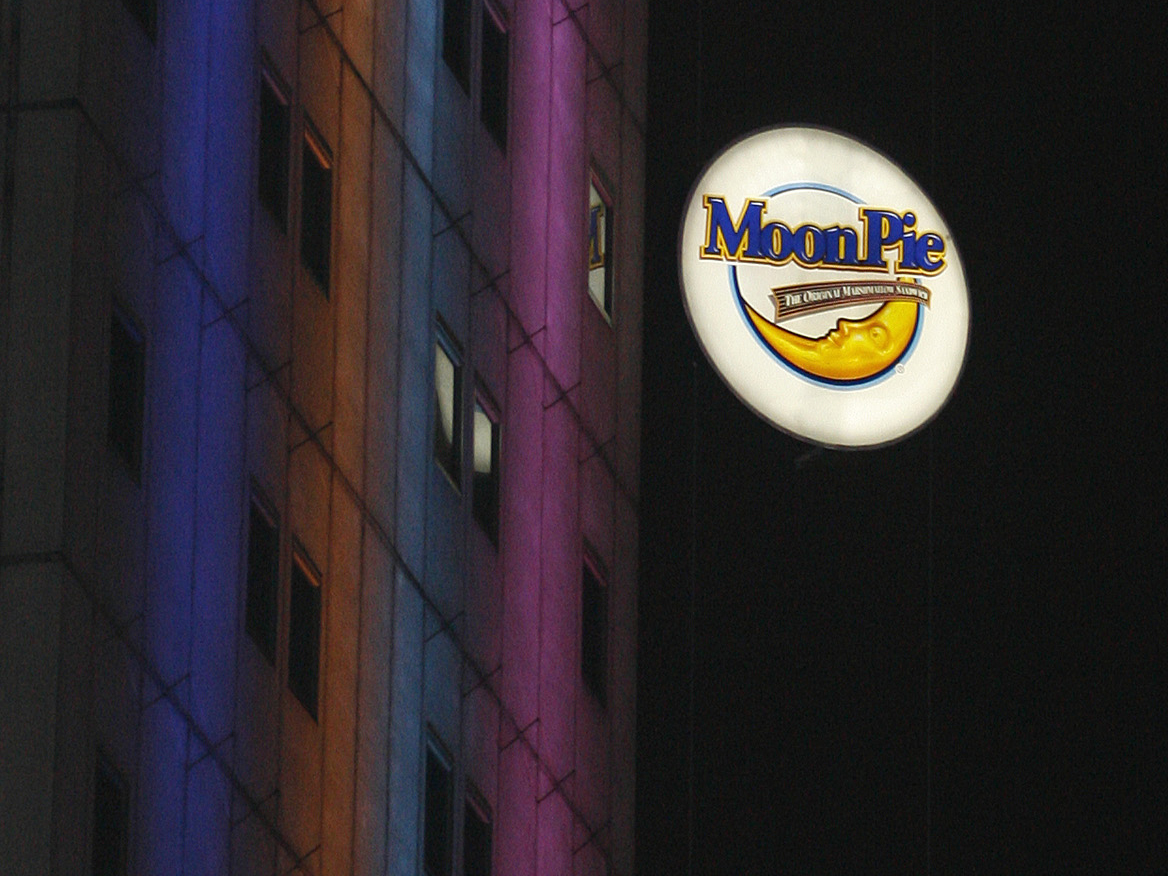 The New Years celebration in Mobile, Ala., includes the Moon Pie Drop along the RSA Bank Trust Building.

When the Moon Pie hits your eye

Revelers in Mobile, Ala., for instance, gather to count down as a 600-lb. electric Moon Pie logo is dropped down the side of a 34-story building.

The snack-based celebration began in 2008 and was the brainchild of City Councilman Fred Richardson.

The Moon Pie, for those who don't know, is a southern treat that's a lot like a s'more. It consists of a marshmallow smashed between two graham crackers and dipped in chocolate.

Since it was first invented at the turn of the century, the confection has become a favorite during Mardi Gras, when it is thrown from floats. Now, the metal Moon Pie sign is a huge draw for thousands from the Gulf Coast, Matt Anderson, special projects manager for the city of Mobile, told NPR.

"In the years since it started, it's become the largest New Year's Eve celebration in the central time zone," Anderson said. 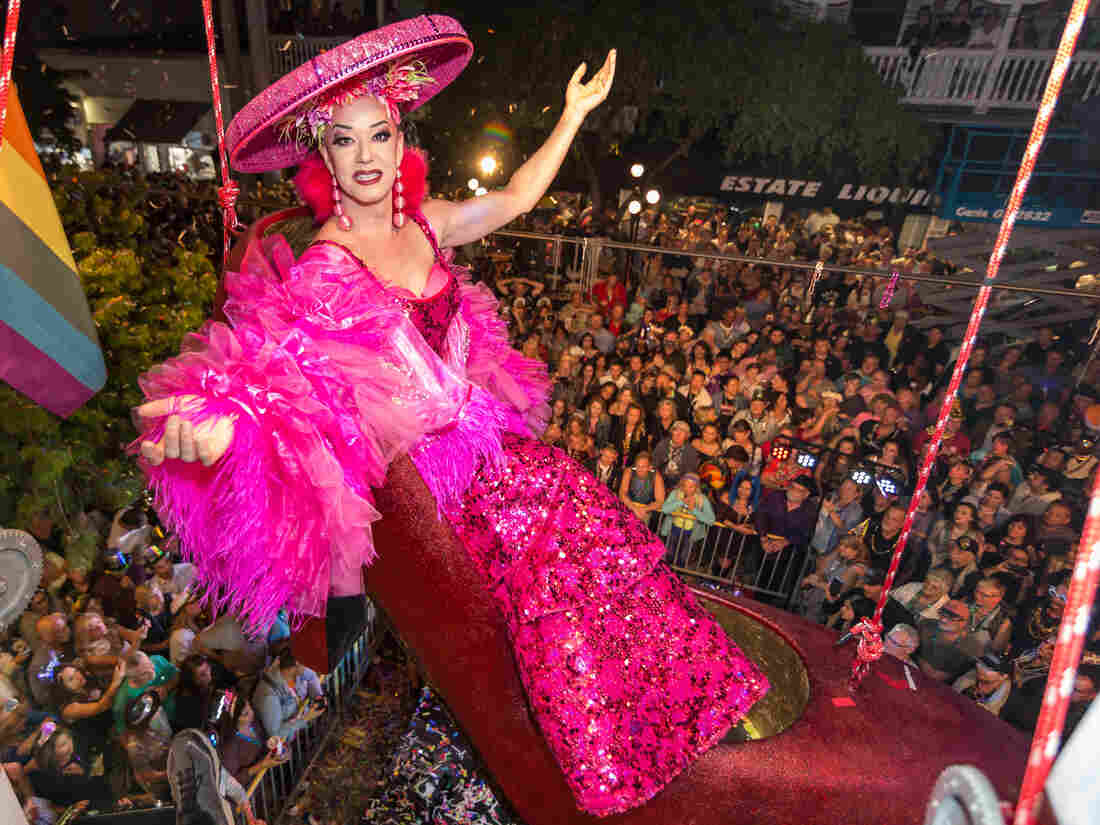 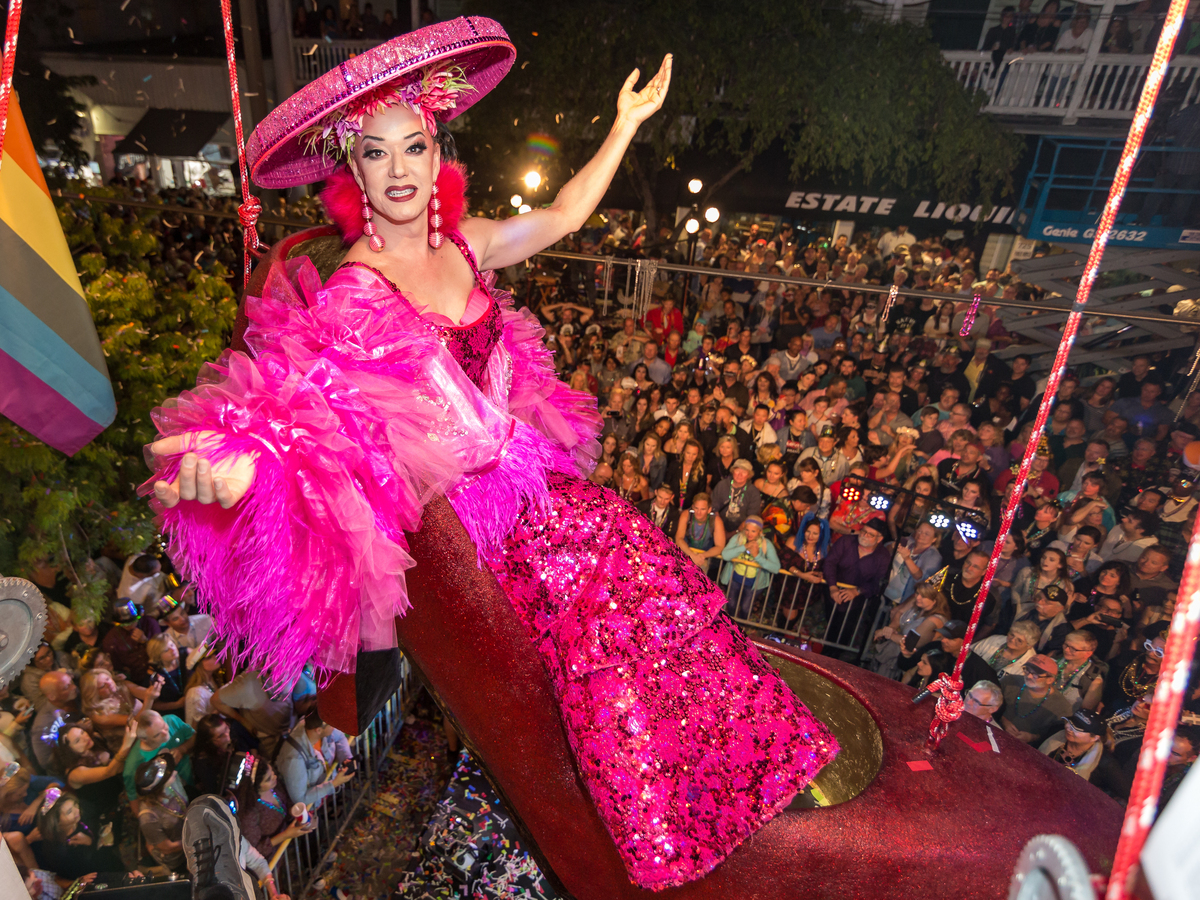 Gary Marion, also known as Sushi, descends into a crowd in a large red high heel. The drag diva began the event "as a fluke" 22 years ago.

Sushi in the sky with sequins

In balmy Key West, Fla., a drag diva named Sushi descends from the sky in a sequins-covered red high heel at the stroke of midnight.

"It started out as a fluke 22 years ago," Stephen Courter, who works the event, told NPR.

"But now the entire street is blocked off and it's become the central event that started the Key West excitement," Courter added.

Each year, Sushi, whose given name is Gary Marion, floats down in the red shoe draped in a custom-made gown that's kept top secret until the grand reveal at the New Orleans House.

The Weatherford Hotel in Flagstaff has been dropping a pine cone since 1999.

Meanwhile, partiers in Flagstaff, Ariz., gather to see a massive, multicolored pine cone descend from atop one of the city's historic hotels.

"What people don't know is that the first one I made I built it out of a plastic garbage can," Sam Green, told NPR.

Green and her husband, Henry Taylor, own the Weatherford Hotel, which started the tradition 20 years ago.

The idea for the pine cone drop came as the couple were gearing up to celebrate the 100th anniversary of the hotel.

That led to the plastic garbage can covered in hundreds of pine cones and lights. About 500 people showed up the first year.

"Now we've created a monster! It just gets bigger and bigger," Green laughed.

She expects about 15,000 people will show up to watch.

Why the pine cone?

Green says Flagstaff is near the biggest ponderosa pine forest in the world. "So it made sense," she said.

Rituals like these mark symbolic gatherings where people join together and decide that something is meaningful, Michelle Janning, a professor of sociology from Whitman College in Walla Walla, Wash., told NPR.

"The things we choose to drop are visual symbols about the importance of the event or the place," Janning said. "So a big glittery ball may not symbolize the Midwest but something else might."

She said the pine cones and pineapples, and peaches all represent an effort by "people to carve out their own local sense of identity."

Janning added that the holidays can be difficult for a lot of people.

"So, doing something in a crowd is a resolution of some the angst around the holidays. A chance to be part of something bigger than you," she said.