Accessibility links
One Night In An Edward Hopper Hotel Room? It's Less Lonely Than You Might Think It isn't hard to imagine yourself inside a Hopper painting (say, having a coffee at a late-night diner) and now, for $150 a night, you can sleep in a re-creation of his 1957 work, Western Motel.

It isn't hard to imagine yourself inside an Edward Hopper painting — having a coffee at a late-night diner, or staring out the bedroom window at the bright morning sun.

Now, for $150 a night, you can sleep in one — or a reproduction of one — at the Virginia Museum of Fine Arts in Richmond. Designers have constructed a 3D version of Hopper's 1957 Western Motel and invited Hopper fans to sleep over.

It feels a little funny getting undressed for bed in a museum. (There are plenty of nudes on the walls, but you don't expect to be one yourself.) But suddenly there you are, in your jammies — a guard outside in the hallway — turning off the gooseneck lamp on the bedside table, tucking yourself under a deep burgundy bedspread, and looking out the big picture "window" at a green Buick parked outside.

The woman in Hopper's Western Motel is sitting on the edge of the bed, looking right at the viewer. What's going on with her? It's hard to say. Hopper doesn't do narratives — "unless we admit that waiting has a storyline all of its own," says Leo Mazow, curator of the "Edward Hopper and the American Hotel" exhibition.

Hopper's people, in various hotel rooms, dressed, undressed, semi-dressed — they're all waiting for something. In a 1944 canvas, Morning in a City, a nude woman stands by her bed holding something white — A towel? A blouse? — and looking out the window.

"She isn't sure what she's doing," Mazow says. "She's pondering her next move." 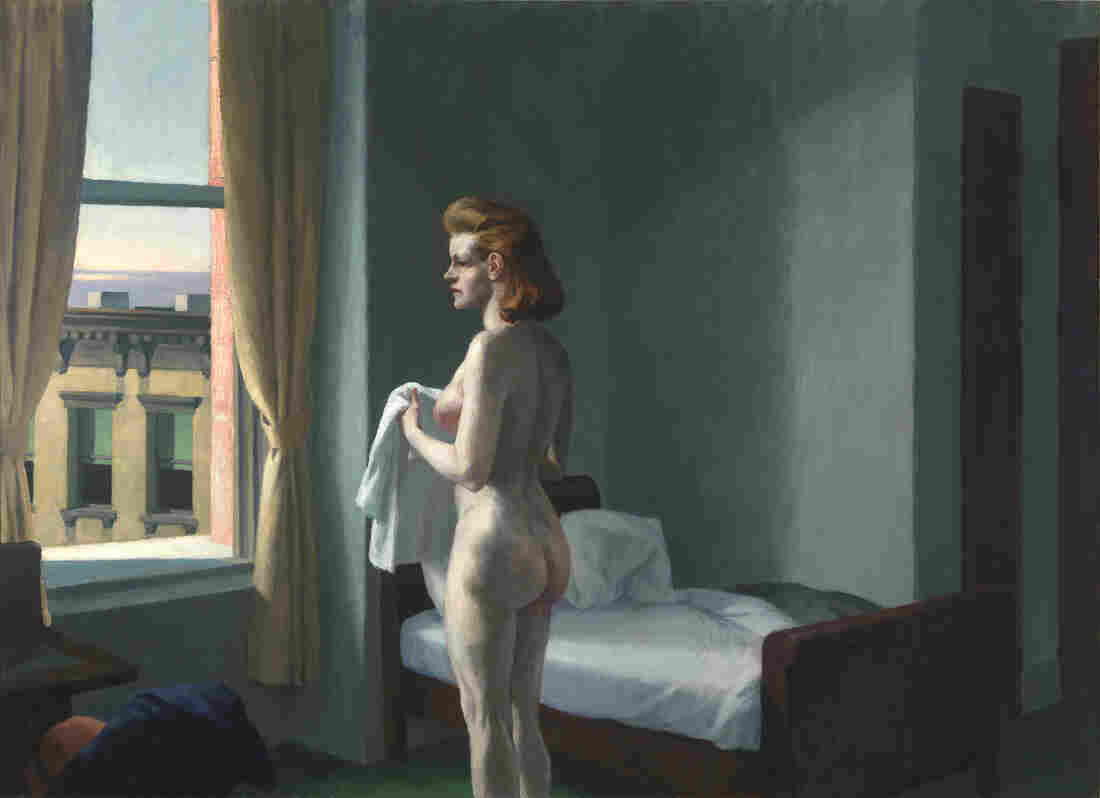 (Hopper's wife, Josephine — at her insistence — was the model for all of these waiting women.)

In Hotel Room from 1931 a woman sits on her bed reading a train schedule. 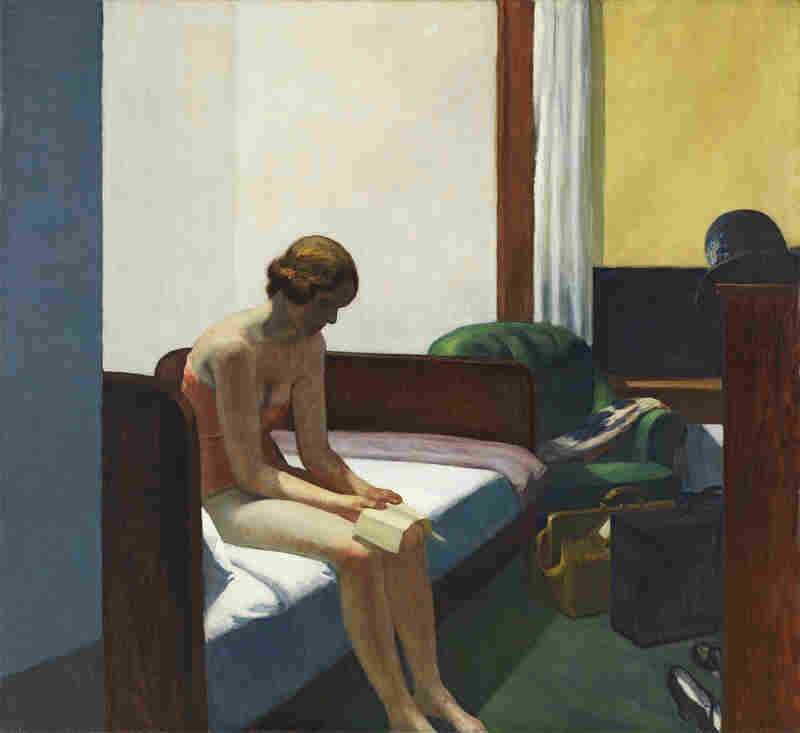 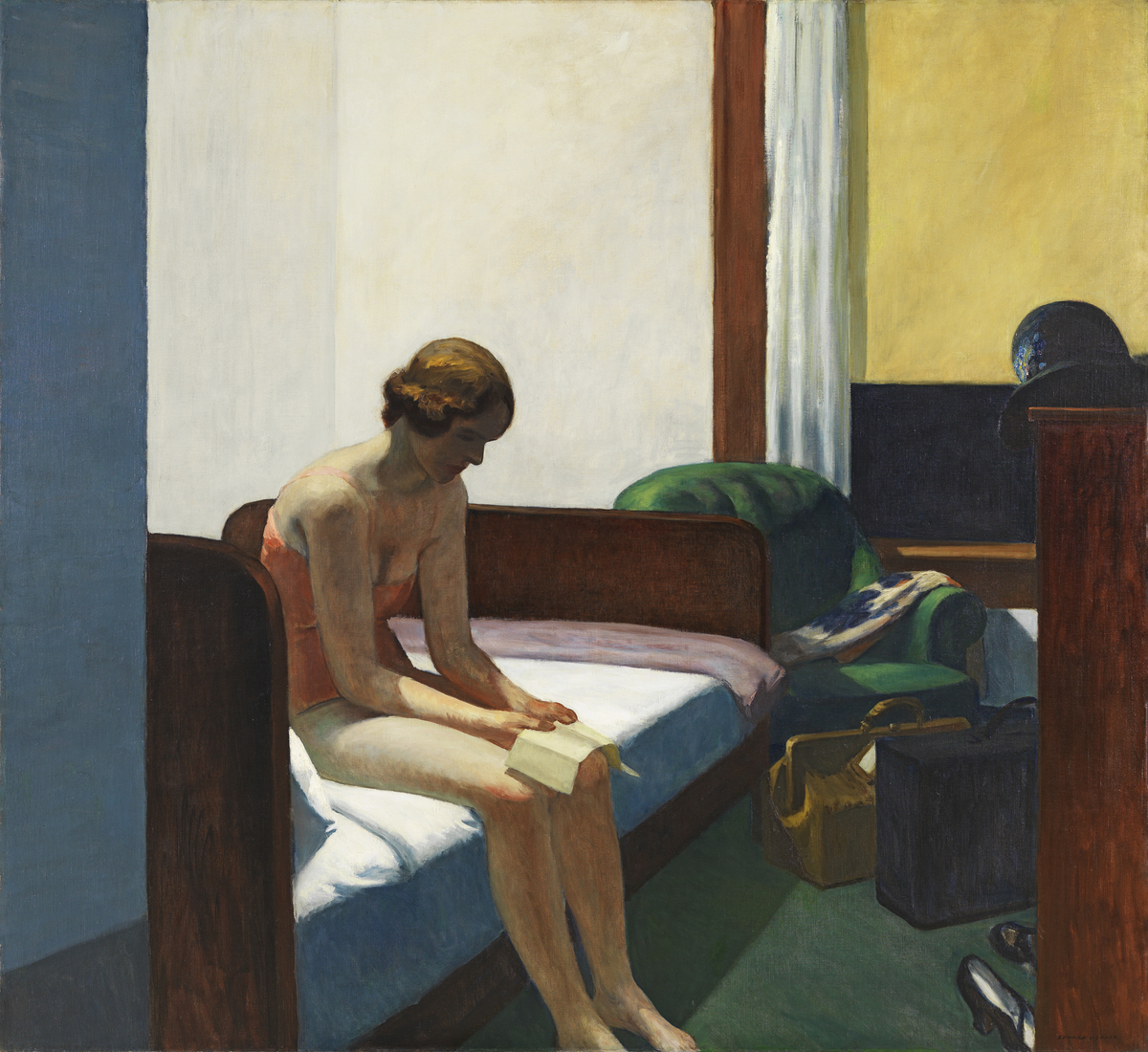 "We see moments of pause, those in-betweens that interest us," Mazow says. "It's isolation; it's alienation. But it's also coming to a pause when there's really nowhere to go and nothing to do."

Hopper's subjects, placed in rooms that look sterile but could smell of cigars, do seem alienated. But Hopper chafed at that characterization. "I think the loneliness thing is overdone," he said.

"Those are the words of critics," he told art critic Brian O'Doherty in a 1961 interview. "I can't always agree with what the critics say, you know? It may be true, and it may not be true. It's how the viewer looks on the pictures — what he sees in them."

It might just be that loneliness is in the eye of the beholder and not all isolation is equal.

"Maybe we should rethink these paintings," Mazow says. "Maybe alienation and isolation — wonderful, modernist buzzwords as they are ... maybe they don't always carry a negative connotation."

Perhaps they're moments to collect yourself, or pull yourself together. I expected to wake up in the manufactured Hopper motel room feeling lonely. Instead, after a good night's sleep, I woke up rested and ready to head out into the gallery — go around the corner and look at the painted motel room, and other Hoppers, and experience his work in a new light.

Vincent Acovino and Nina Gregory produced and edited this story for broadcast. Beth Novey adapted it for the Web.

If Edward Hopper Had Been A Photographer