Accessibility links
Why Some Rope Knots Hold Better Than Others We know that some knots hold better than others, but the why of it hasn't been so clear. Special fibers that change color under strain are providing some answers. 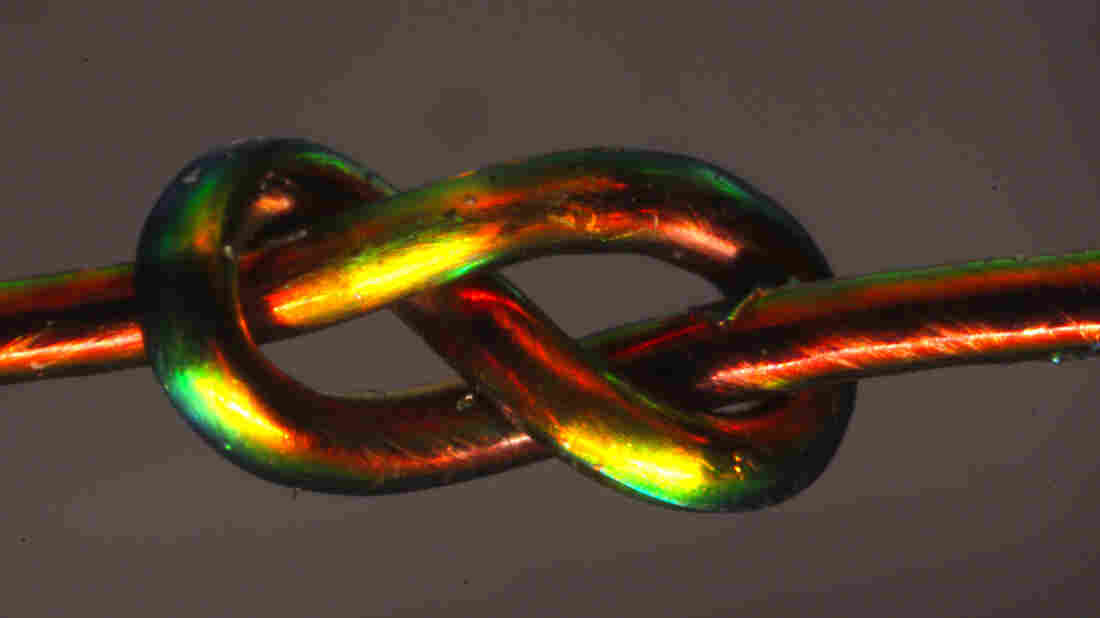 Scientists are studying how some knots perform better than others, like this figure-eight knot tied using a special fiber that changes color under strain. Regions of high strain (green, yellow) can be easily distinguished from sections of the knot at low strain (red, orange). Joseph Sandt hide caption 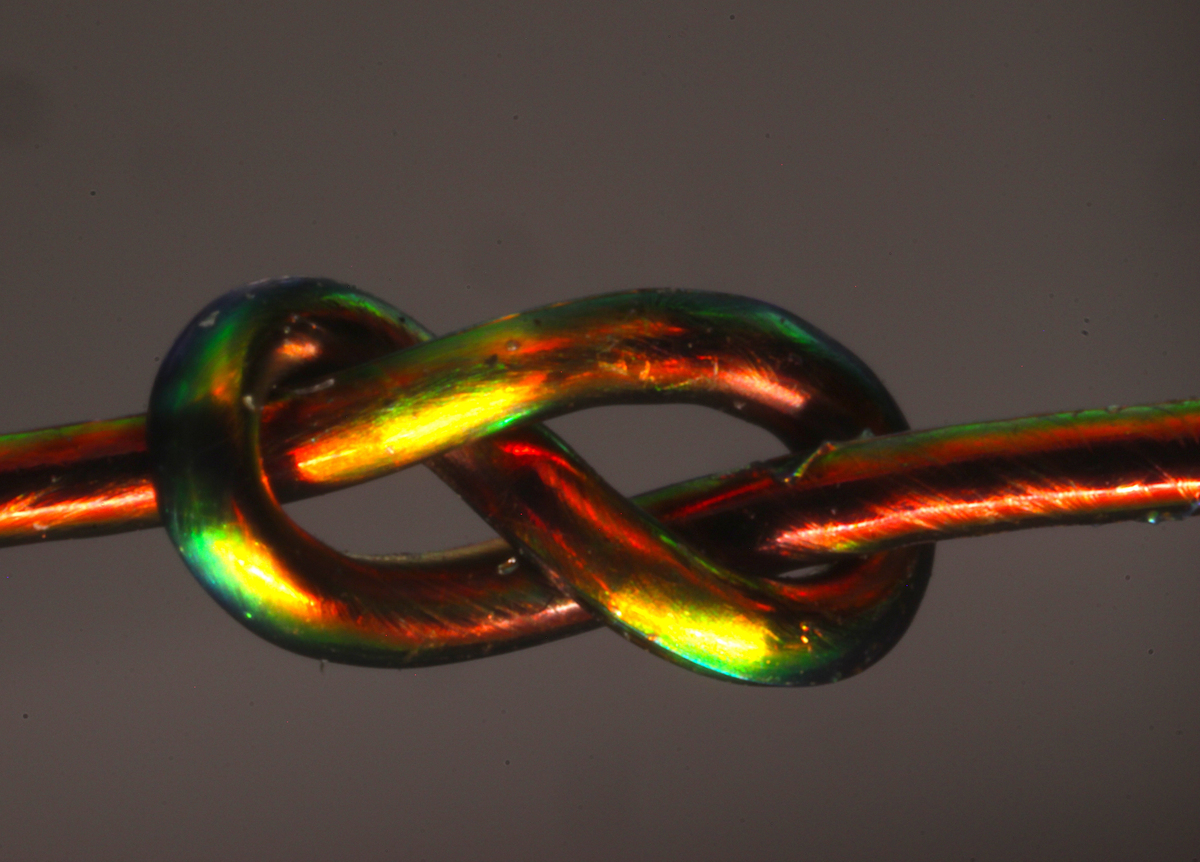 Scientists are studying how some knots perform better than others, like this figure-eight knot tied using a special fiber that changes color under strain. Regions of high strain (green, yellow) can be easily distinguished from sections of the knot at low strain (red, orange).

Special fibers that change color when they are under strain have helped scientists come up with some simple rules that can predict how a knot will perform in the real world.

There's a whole field of mathematics that studies knots, to explore abstract properties of idealized curves. "But that's not what you care about if you are, for example, a sailor or a climber and you need to tie something which holds," says Vishal Patil, a graduate student at the Massachusetts Institute of Technology whose new findings appear in the journal Science.

People have used knots since ancient times, notes Patil, and thousands of knots have been invented. Yet scientists struggle to explain why knots do what they do. Most of what's known about them comes from long experience, rather than any theoretical understanding.

"It's quite easy to see this, if you just take a shoelace or a bit of string and you tie it. If you pull on the reef knot, it tends to hold. And if you pull on the granny knot, it tends to slip quite easily," says Patil. "The fact that they behave so differently suggests that there must be some story there, something you can say mathematically and physically about them."

Recently, he and Jorn Dunkel of MIT heard about a special kind of new fiber. It was developed by their MIT colleague Mathias Kolle, and it changes color when it's under strain.

Dunkel says this fiber seemed like a real opportunity "to actually study the stability of knots. Because before, obviously, nobody was really able to look into knots and see where the strain goes and how the forces are distributed."

Joseph Sandt of MIT tied simple knots in this fiber, and the team observed the color changes to understand what was going on in the knots. Then they used this information to fine-tune some computer simulations.

After that, they took what they'd learned and came up with basic rules that would let them identify strong knots and weak knots without having to do a bunch of rigorous calculations. "You should be able to look at a knot and how it's tied and guess how stable it's going to be," says Patil.

Strain On A Figure-Eight Knot

A figure-eight knot made using a color-changing fiber shows patches of yellow, green and blue to indicate regions of high strain. This particular fiber has been immersed in an oil bath to reduce the influence of fiber drag.

They learned that one key feature — and the thing that separates the reef knot from the granny knot — is twist.

"Twist is quite important in how knots behave," says Patil, who explains that having lots of twists going in opposite directions along the knot can kind of lock it. "But if lots of twists are going in the same direction, then the whole thing can roll out."

Other important factors include the amount of friction in the knot and its overall complexity.

To see how well their rules could predict a knot's behavior, the researchers took six different knots and ranked them in terms of how stable they thought the knots would be. Then they tested the knots experimentally by loading them with weights to see how much weight was needed to get the knots to slip.

Their predictions held up, the researchers say, and that means their new framework for understanding knots could someday be used to design new types of knots that are just right for specific jobs.

After all, even without this kind of sophisticated understanding, people have been designing new knots for ages.

"It seems like humans just lucked out and discovered some good knots," says Patil, "but it's kind of unclear how."

He notes that inventing knots seems to be a uniquely human activity and that such complicated knots don't appear in nature.

"The question of how did people even come up with these knots kind of baffles me," says Patil. "I guess if you spend a long time at sea, maybe eventually you work out a good way of tying something to something else."