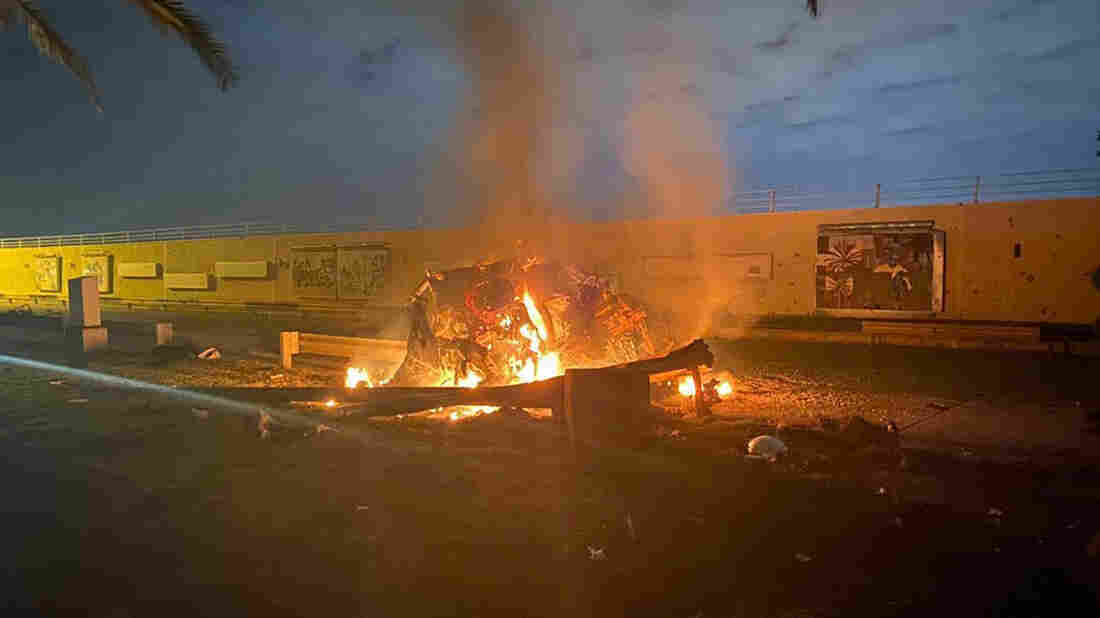 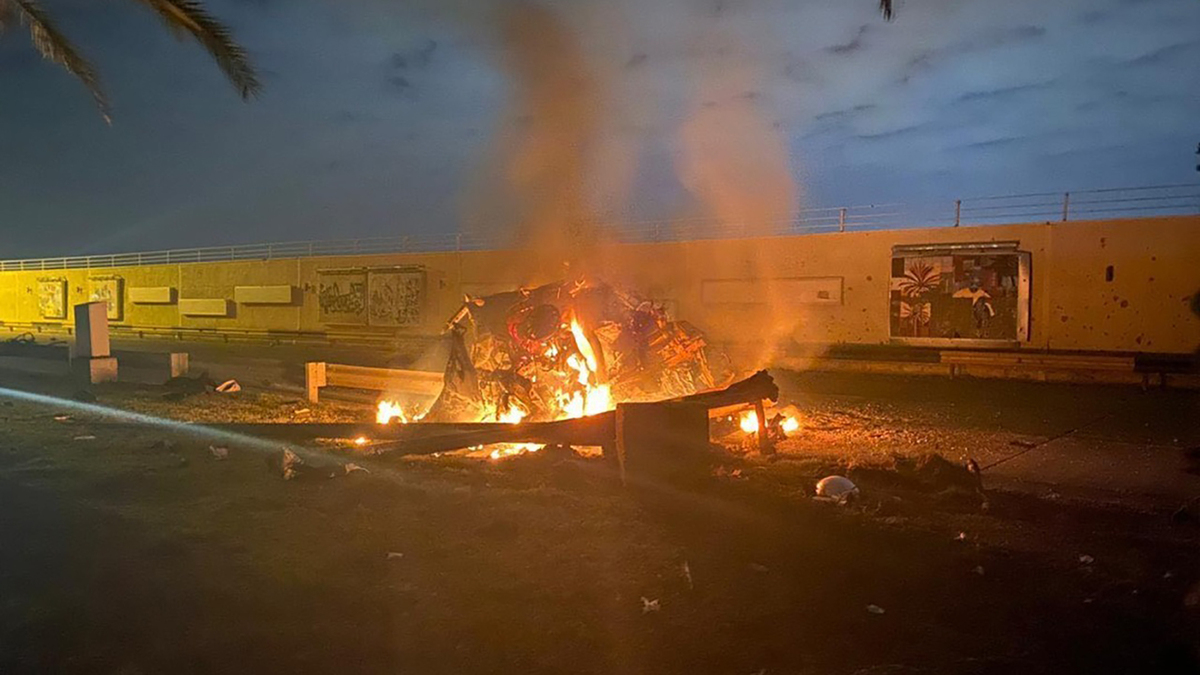 U.S. forces assassinated Iranian Maj. Gen. Qassem Soleimani in an airstrike early Friday near the Baghdad International Airport, an escalation of tensions between Washington and Tehran that is prompting concerns of further violence in the region.

The attack, an action previous presidents have resisted, was undertaken at the direction of President Trump.

For two decades, Soleimani led the elite Quds Force, a branch of Iran's Islamic Revolutionary Guard Corps, responsible for the country's intelligence and military operations outside of Iran.

Hamid Mousavi, a political science professor at the University of Tehran, said the strike stunned many Iranians who revere the military leader.

How Is The World Reacting To The U.S. Assassination Of Iran's Qassem Soleimani?

"It would be akin to Iran assassinating the chairman of the Joint Chiefs of Staff," Mousavi told NPR. "Essentially, it's an act of war."

The State Department on Friday urged U.S. citizens to immediately leave Iraq, where officials say the embassy in Baghdad was attacked by Iran-backed militia members earlier in the week.

The strike on Soleimani comes a week after a rocket attack in northern Iraq killed a U.S. contractor. American officials said an Iranian-backed militia was responsible. The Trump administration also tied Soleimani to recent violent protests.

Iranian Foreign Minister Javad Zarif called the killing "an act of international terrorism," saying the U.S. "bears responsibility for all consequences of its rogue adventurism."

Iran's Supreme Leader Ayatollah Ali Khamenei said in a statement on Iranian state TV that a "harsh retaliation is waiting" for the U.S.

Iran's President Hassan Rouhani was just as forceful, describing the strike as a "heinous crime" for which Iran will seek revenge.

"So the biggest question now is how does Tehran respond?" wrote Ilan Goldenberg, a Middle East security expert who worked on Iran issues in the Obama administration.

"Targeting an American diplomatic facility or senior leader with a terrorist attack elsewhere in the world may feel proportional for the Iranians but this is very hard to pull off. Outside of the Mideast their capabilities are much more limited," Goldenberg tweeted.

Trump, who is vacationing on his estate in Palm Beach, Fla., tweeted a photo of an American flag with no other message. Trump had earlier vowed that Iran would "pay a very big price" for the unrest at the U.S. Embassy compound in Baghdad.

Republicans celebrated the killing of Soleimani, saying America is safer after the violent leader was brought to justice. But Democrats slammed the White House for not consulting Congress before the strike and worried the attack would lead to an "almost inevitable escalation."

House Speaker Nancy Pelosi said in a statement the strike was "disproportionate," arguing that it "risks provoking further dangerous escalation of violence. America — and the world — cannot afford to have tensions escalate to the point of no return."

The chairman of the House Committee on Foreign Affairs, Rep. Eliot Engel, D-N.Y., released a statement saying he is worried about the security aftereffects of the strike, which Engel said had gone ahead without notice or consultation with Congress.

"To push ahead with an action of this gravity without involving Congress raises serious legal problems and is an affront to Congress's powers as a coequal branch of government," Engel said.

Naysan Rafati, a senior Iran analyst at the International Crisis Group, underscored just how significant the death of Soleimani is inside Iran, where he is among the country's most revered military leaders.

"This is a major blow to the Iranians, symbolically as well as strategically. There has been no individual as deeply associated with Iran's regional network of partners and proxies as Soleimani, which made him a hero to Tehran's allies and a villain without peer to its rivals," Rafati said.

Iraqi Prime Minister Adel Abdul-Mahdi characterized the strike in dire terms, saying it is "a dangerous escalation that ignites a devastating war in Iraq, the region and the world." 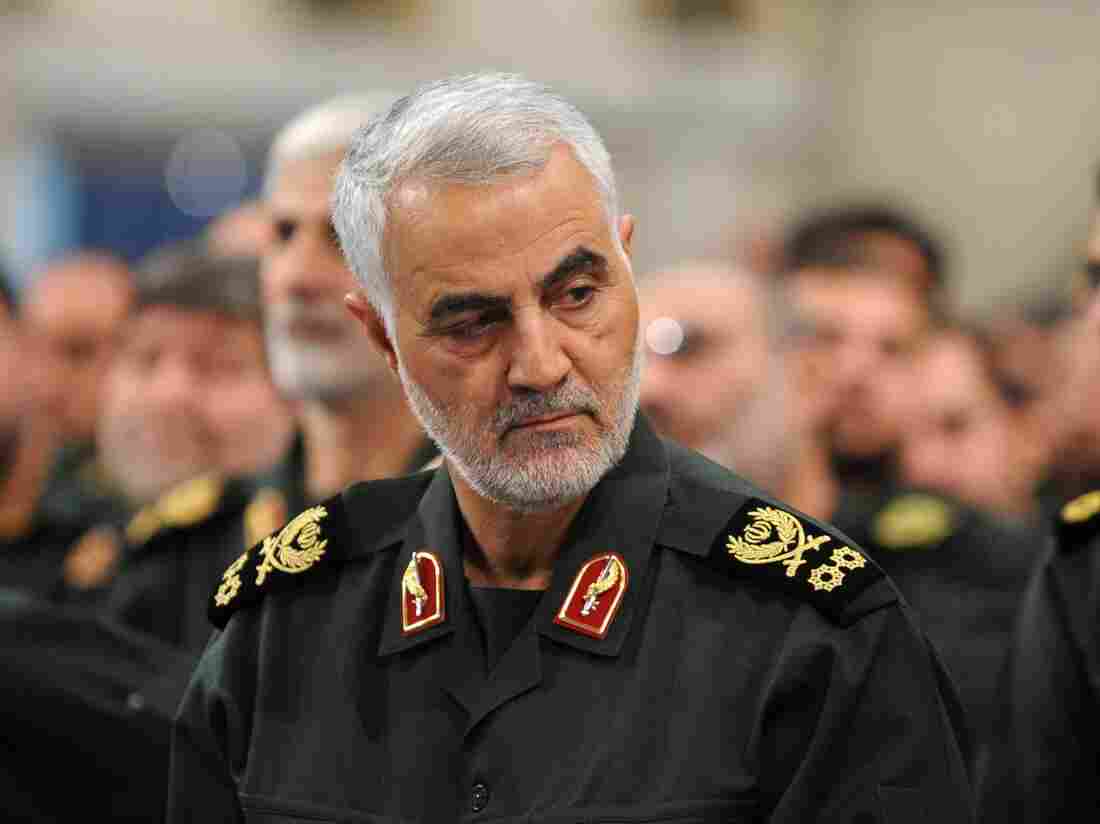 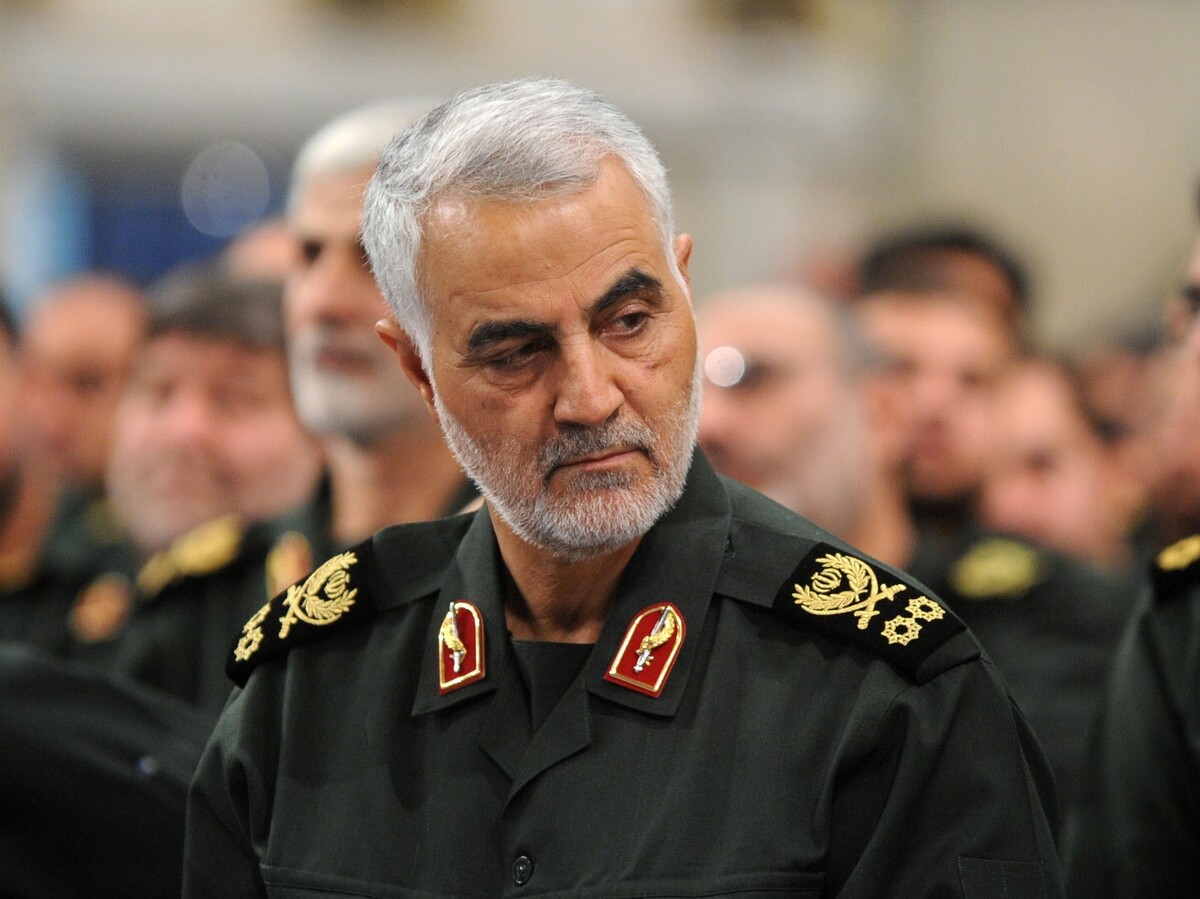 Iranian Quds Force commander Gen. Qassim Soleimani, seen in September, was killed Friday in a strike on the international airport in Baghdad.

A reach far beyond Iran

Soleimani was one of Iran's most powerful and shadowy figures. As leader of the Quds Force, he was said to be responsible for the country's development and coordination with militias and proxy forces throughout the Middle East. U.S. officials accuse him of coordinating Iraqi militia attacks on U.S. forces in Iraq.

U.S. officials have accused Soleimani of sponsoring terrorism and singled him out as a major figure for decades. The Trump administration placed the Islamic Revolutionary Guard Corps — which includes the Quds Force — on the State Department's list of terrorist groups. It was the first time a government's official military was placed on the list.

Norman Roule, now retired, tracked Iran through his career with the CIA and the Office of the Director of National Intelligence. He told NPR's All Things Considered the death of Soleimani was significant.

"You can expect seismic waves to go through the Shia communities of Lebanon, Iraq and Iran," Roule said. "You can expect that the Iranians and the Iraqi militia groups will certainly seek some sort of retribution."

Force protection of U.S. and allied interests will be foremost in the minds of U.S. and partner security forces. I expect State will issue a travel advisory and those in the region should adopt appropriate precautions. https://t.co/olVHIc49Wb

Roule said he believed the U.S. would not have carried out the strikes unless "a significant terrorist attack was underway or about to be undertaken by these individuals and if neutralizing these individuals would prevent that."

Soleimani's Quds Force is a "sort of a mixture of our special operations and Central Intelligence Agency," according to Roule. "He [had] been given charge of Iran's foreign policy in the region and in essence he used that authority to create a series of militias based on the Lebanese Hezbollah."

"As a military commander he would not actually rank in capacity or stature with a first-world military commander, such as a U.S. general. However, his political reach was vast ... in that Iran basically ceded its regional activities to his purview," Roule said.

In 2018, Soleimani spoke with political authority when he responded to a tweet by President Trump, who said Iran would "suffer consequences the likes of which few throughout history have ever suffered before" if it repeated threats against the U.S.

"Come. We are ready," Soleimani said, accusing Trump of using "the language of nightclubs and gambling halls."