Accessibility links
Hasidic Jews Change Routines Out Of Fear Of Anti-Semitic Attacks One family says that their distinctive dress makes them easy targets and that they are on guard even in their own Orthodox community in Brooklyn. 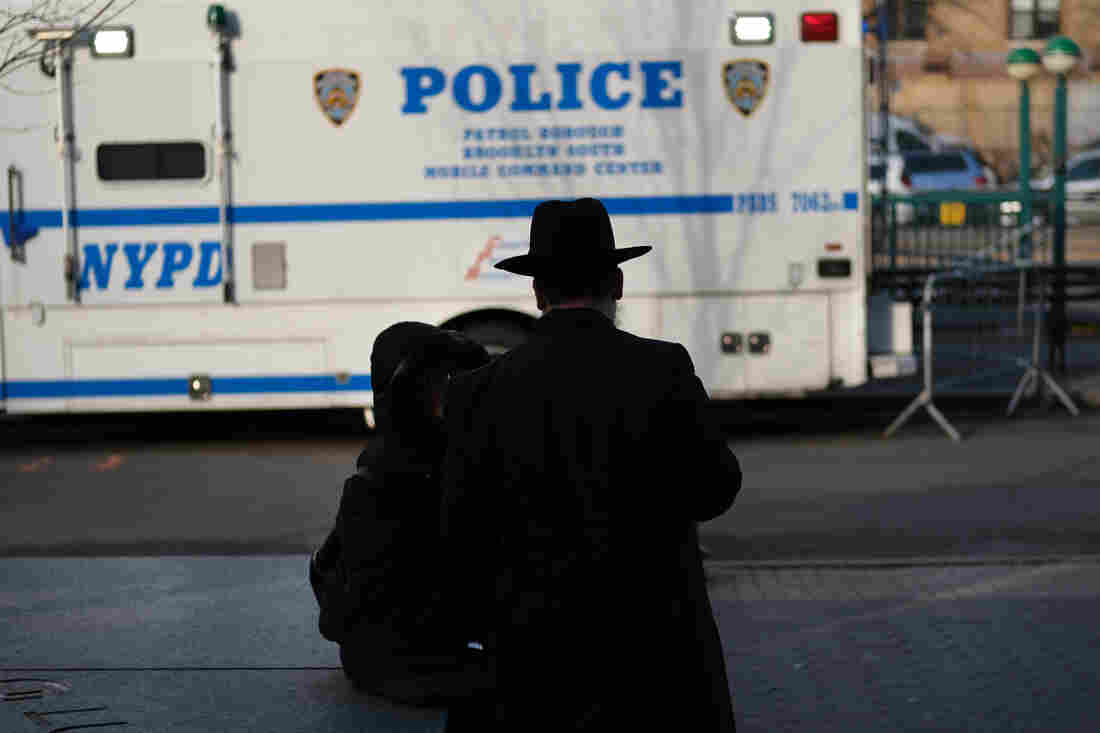 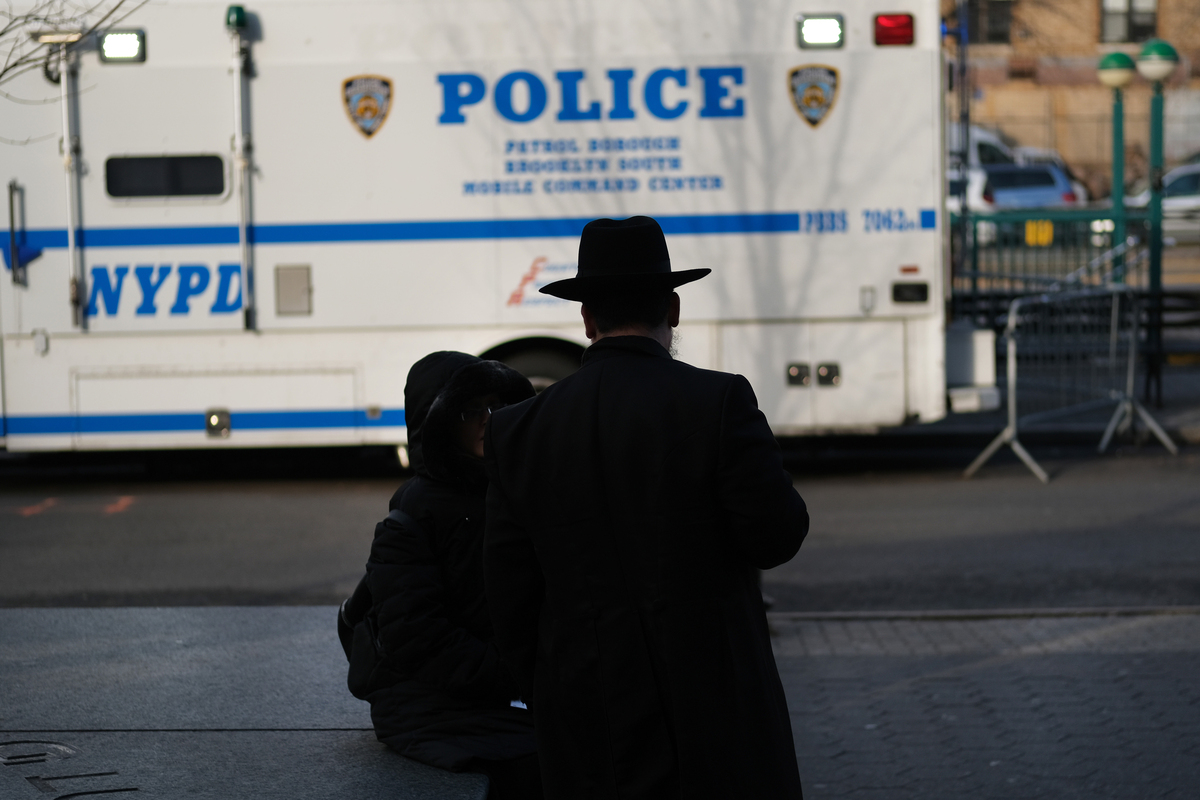 People walk through the Orthodox Jewish section of a Brooklyn neighborhood last month. Tensions remain high in Jewish communities following a series of attacks and incidents in recent weeks.

The streets of Brooklyn's Williamsburg neighborhood are usually busy with Hasidic families coming and going. The men and boys wear distinctive hats and beards and side curls known as peyots. Esther and Yehuda Weiss have lived here all their lives. They've been shaken by recent anti-Semitic harassment and violence.

"We all get worried and scared," Yehuda says.

Esther sets out a bowl of sugared nuts and sits across from her husband. "It's getting very scary, and it's putting a lot of our stress on our daily lives."

Hasidic Jews started moving to Williamsburg in the 1930s. The Weisses' parents moved from Hungary and Romania. The community's population now tops 70,000. There are traditional schools, kosher shops and synagogues. Esther says it was a great place to grow up.

"We were always sheltered and felt comfortable living easily and happily without fears," she says. "But these instances are rising tremendously, faster than we could decide what we're supposed to do with our lives now."

This is still one of the safest neighborhoods in New York City, but there have been more than a dozen anti-Semitic incidents reported statewide in the last month alone. They range from harassment and bullying to the full-blown violence of the machete attack in Monsey, N.Y., a suburb just north of the city. The Weisses also speak with alarm about the deadly attack last month at a kosher market across the river in Jersey City, N.J.

Yehuda says it's especially frightening for Hasidic Jews, whose traditional clothing and hair mark them as targets. "I never thought of having weapons by me to defend myself because I don't feel it's a good thing that everyone should have guns and any weapons at all. But now I'm really thinking you should at least have a bottle of Mace in your pocket," he says.

Why this apparent increase in aggression against Jews? The Weisses believe it is coming from a lot of different directions, including white supremacists and neo-Nazis.

"It's almost like the Nazis are picking their heads up again," Esther says. "My parents were both Holocaust survivors, and they're still alive. They're here to tell the stories. But we thought here in New York, it's a story of the past."

After Attacks, What Is New York City Doing To Protect Jewish Communities?

The Weisses say they're worried about threats and harassment from almost everybody. Some of the most violent incidents in recent weeks, including the Monsey attack, allegedly involved African American suspects, not white supremacists.

The Weisses say they have good relations with many of their black neighbors. But they make their living as landlords, renting apartments. They used to collect rents in person, now they try not to.

"We're scared to go. You don't know what's going to happen," Esther says. "They're going to see a Jewish guy here; they're going to find a target. So we're not going. We're doing by phone, by email as much as we can.

They're so concerned about safety that they declined to be photographed. While we talk, Esther and Yehuda's son, Lazar, comes in. He turns 12 next month. He has always been what you might call a free-range kid, walking to school, running errands in the neighborhood at all hours. But with his smaller set of side-curls, he, too, is clearly identifiable as Hasidic. And says he feels vulnerable.

"Sure, it's a scary thing," Lazar says. He says kids tell scary stories about being harassed. "We are talking." There are security posts outside their schools, and they've been holding live shooter drills. He says it makes him anxious. "Coming home I see a white car, it goes fast and I turn around and see it's opening its door. I started running."

How Online Conspiracy Theories Make Their Way Into The Mainstream

Lazar's mom no longer lets him go out after dark. The Weisses blame a lot of this anti-Semitism on the Internet, where anti-Jewish conspiracy theories are widely disseminated.

"What you're seeing, the saluting, swastikas drawn all over, graves being attacked, it's just what's seeping out, but what's going on underneath?" Esther says.

"It should be closed such internet sites, it's very terrible they leave it open because that goes to a lot of people in one minute," Yehuda agrees.

Officials say they are stepping up police patrols to restore a sense of security to Jewish neighborhoods. But Yehuda and Esther Weiss say for now things feel like they're getting worse not better.