Accessibility links
Qassem Soleimani's Killing: How Is World Reacting To Iranian General's Death? The prominent general's killing, carried out in an airstrike in Iraq, has elicited a wide range of responses — from vows of revenge to enthusiastic words of support. Here's a look at the fallout.

How The World Is Reacting To The U.S. Assassination Of Iran's Qassem Soleimani

How The World Is Reacting To The U.S. Assassination Of Iran's Qassem Soleimani 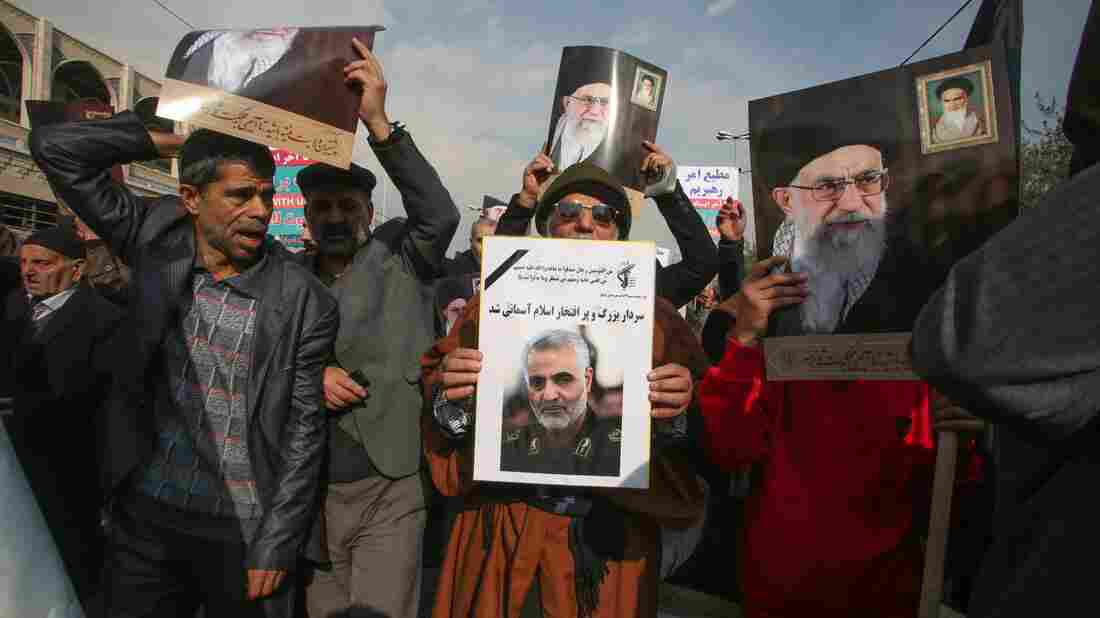 Iranian demonstrators hold posters of slain Maj. Gen. Qassem Soleimani (center) and the country's supreme leader, Ayatollah Ali Khamenei, during a rally Friday in the capital, Tehran. The U.S. strike on the military leader in Baghdad has elicited warnings of retaliation from Iran. Atta Kenare/AFP via Getty Images hide caption 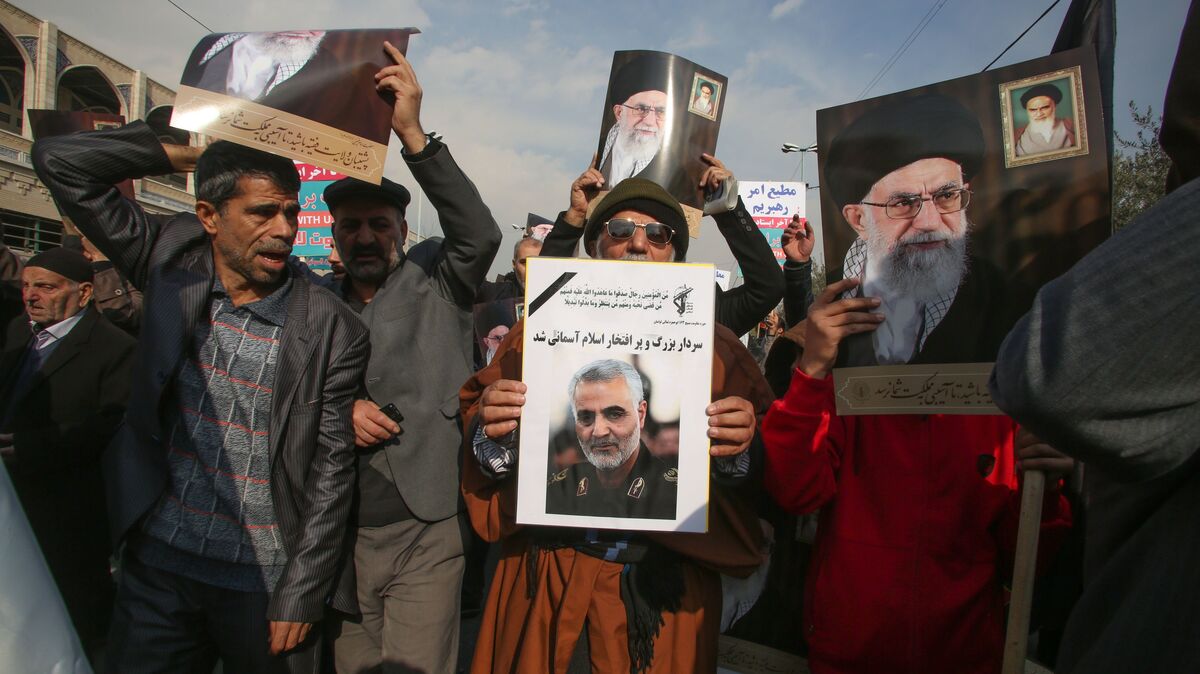 Iranian demonstrators hold posters of slain Maj. Gen. Qassem Soleimani (center) and the country's supreme leader, Ayatollah Ali Khamenei, during a rally Friday in the capital, Tehran. The U.S. strike on the military leader in Baghdad has elicited warnings of retaliation from Iran.

Less than a day after the U.S. killed a top Iranian military commander, assassinating Maj. Gen. Qassem Soleimani in an overnight drone strike outside Baghdad International Airport, the questions eddying around the world can be simplified to just one: How will Iran respond?

Both of the leading figures in Iran's government, Supreme Leader Ayatollah Ali Khamenei and President Hassan Rouhani, have vowed to take revenge for the killing — or "harsh retaliation" in the words of Khamenei during a televised statement.

"The flag of General Soleimani in defense of the country's territorial integrity and the fight against terrorism and extremism in the region will be raised, and the path of resistance to US excesses will continue," Rouhani tweeted Friday, hours after the strike. "The great nation of Iran will take revenge for this heinous crime."

The assassination came near the end of a turbulent week in Iraq's capital, Baghdad, where Iraqi militiamen and their supporters had repeatedly attempted to storm the U.S. Embassy. In a series of clashes with U.S. forces defending the gate, the two sides exchanged volleys of rocks and teargas.

The U.S. has laid blame for the violence earlier this week with Soleimani, the longtime commander of Iran's elite Quds Force, a secretive subset of the Islamic Revolutionary Guard Corps that operates outside the country. President Trump and Defense Secretary Mark Esper both maintain that the violent protest was led in part by Soleimani, who they say had plans for a wider, systematic assault on American diplomats.

A U.S. official tells NPR the Iranian general was killed in a Reaper drone strike, which fired several missiles at a vehicle he was in near the airport. Noted Iraqi militia commander Abu Mahdi al-Muhandis also died in the attack.

"General Qassem Soleimani has killed or badly wounded thousands of Americans over an extended period of time, and was plotting to kill many more...but got caught!" Trump tweeted Friday morning, blaming the Iranian general for the deaths of "millions" both inside and outside of Iran.

"While Iran will never be able to properly admit it," Trump added, "Soleimani was both hated and feared within the country. They are not nearly as saddened as the leaders will let the outside world believe. He should have been taken out many years ago!"

Trump's sense of vindication clashes with the angry or wary reactions of many of the other countries involved in the tense situation. Among those who pushed back on the U.S. airstrike was Iraq's own prime minister, Adel Abdul-Mahdi.

Abdul-Mahdi, whose tenuous position has been the subject of months of protests in Baghdad and elsewhere, warned that the killing will lead to a "dangerous escalation" — inside Iraq, around the broader Gulf region and across the world. He said Soleimani and Muhandis "were huge symbols of the victory" against the Islamic State, which Iraq declared in late 2017 after years of intense fighting against the Islamist militant group.

Abdul-Mahdi formally resigned roughly one month ago under pressure from protesters, who called for his ouster as part of a raft of demands for governmental change. Hundreds of people died in related protests. Still, he remains in office in a caretaker capacity, with the support of neighboring Iran. 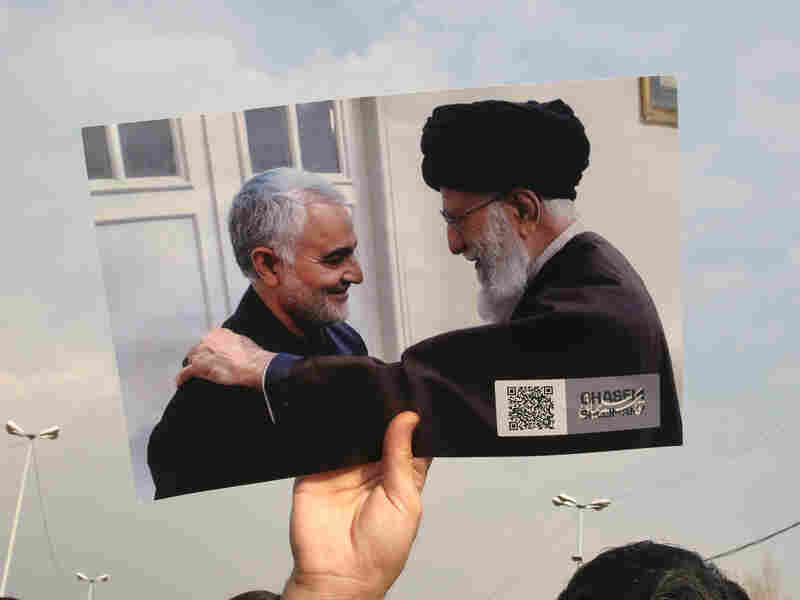 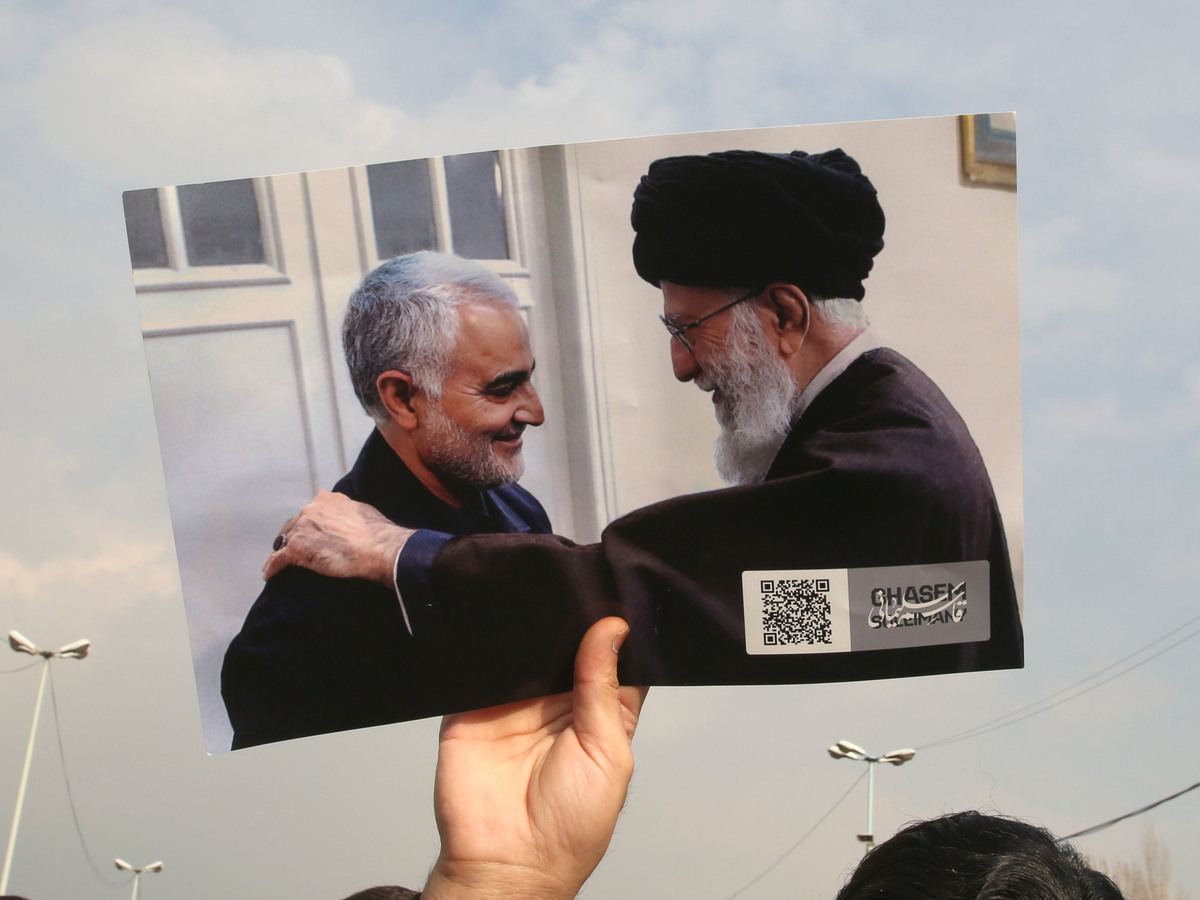 "The assassination of an Iraqi military commander who holds an official position is considered aggression on Iraq ... and the liquidation of leading Iraqi figures or those from a brotherly country on Iraqi soil is a massive breach of sovereignty," Abdul-Mahdi said, according to a Reuters translation.

He also requested that the Iraqi Parliament convene an extraordinary session to discuss a formal legislative response.

Meanwhile, Russia, which has closely collaborated with Iran on military operations against ISIS in Syria, condemned the attack as hasty and driven by ulterior motives.

"To condemn attacks on their embassies, countries normally turn to the [United Nations] Security Council with a draft statement by the president," Russian Foreign Ministry spokesperson Maria Zakharova said in a statement released Friday. "Washington has made no such appeal, which means it isn't interested in the world reaction. What it is interested in is the balance of power in the region."

U.N. Secretary-General António Guterres said through a spokesperson that he is "deeply concerned" with the U.S. attack. "This is a moment in which leaders must exercise maximum restraint," Farhan Haq said in a statement on Guterres' behalf. "The world cannot afford another war in the Gulf."

The U.S. was not without backers in its decision, however. Israeli Prime Minister Benjamin Netanyahu, for one, came out strongly in support of the assassination.

"Just as Israel has the right of self-defense, the United States has exactly the same right. Qassem Soleimani is responsible for the death of American citizens and many other innocent people. He was planning more such attacks. President Trump deserves all the credit for acting swiftly, forcefully and decisively," the longtime Israeli leader said.

"Israel stands with the United States in its just struggle for peace, security and self-defense," Netanyahu said.

"We will not let attacks ... go unpunished"

In the U.S., opinion unsurprisingly has been divided largely along partisan lines.

"Today's confirmation is not only a statement to those seeking to attack America, but it also marks the stark difference between this administration and previous ones," McCarthy said. "We will not let attacks that kill Americans go unpunished."

Congress Was Not Consulted On U.S. Strike That Killed Iranian General

Congress Was Not Consulted On U.S. Strike That Killed Iranian General

Others on the other side of the aisle, however, expressed reservations about how the president decided to carry out the attack — without the consent of lawmakers.

"He has the ability to prevent an imminent attack against the United States without coming to Congress," Democratic Sen. Chris Murphy of Connecticut told NPR's Morning Edition on Friday. "I think we need to see the fact that that is, in fact, true. He does not have any other standing authorization to take out a strike against a country that we have not declared war against."

NPR's Tom Bowman and Lama Al-Arian contributed to this report.