Accessibility links
Democrats Warn Of Fallout From Airstrike On Qassem Soleimani Democrats say they were not informed ahead of Thursday's airstrike targeting Qassem Soleimani. Republicans, though, say President Trump ended a terrorist's reign. 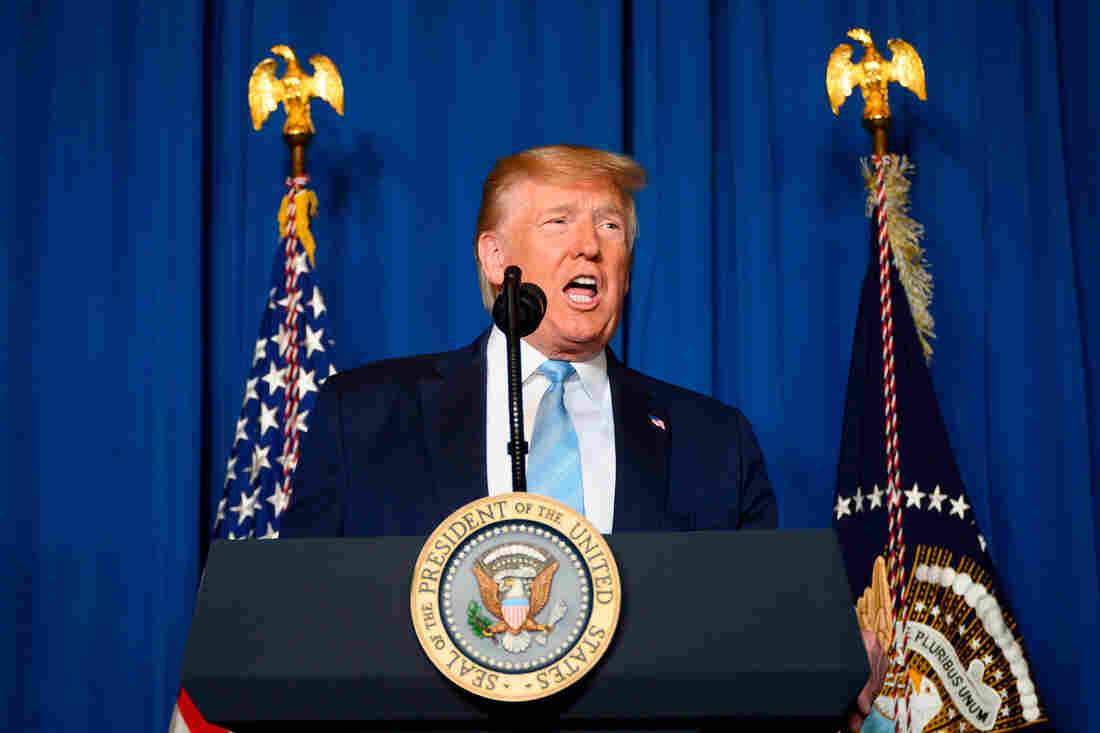 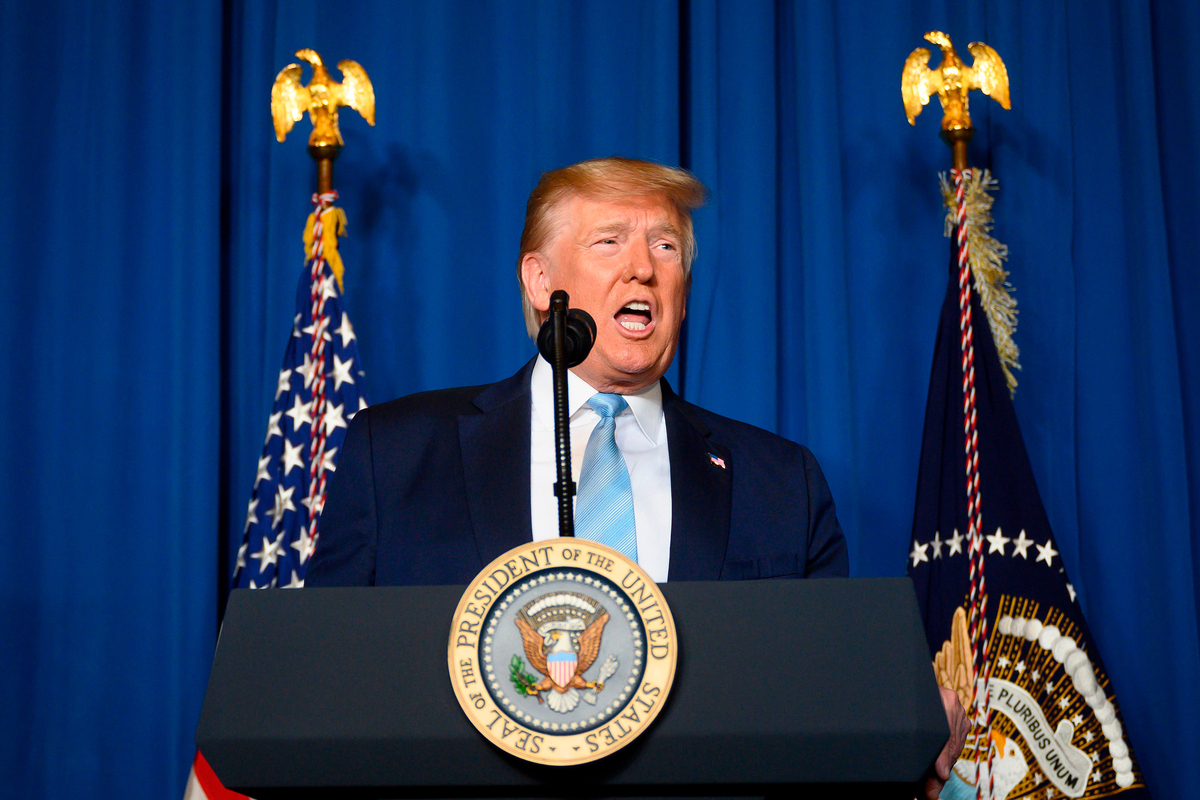 President Trump says Qassem Soleimani was plotting "imminent and sinister attacks on American diplomats and personnel," in a statement at the Mar-a-Lago estate in Palm Beach, Fla., on Friday afternoon.

President Trump, in his first public remarks in the wake of a U.S. strike that killed Iranian Maj. Gen. Qassem Soleimani, defended the action as necessary to protect national security.

"We took action last night to stop a war. We did not take action to start a war," Trump said Friday afternoon from his Mar-a-Lago resort in Florida.

"We take comfort in knowing his reign of terror is over," Trump added, praising the military for executing a "flawless precision strike."

"Soleimani was plotting imminent and sinister attacks on American diplomats and personnel," the president said.

"What the United States did yesterday should have been done long ago," he said, adding this was not done to prompt "regime change" in Iran.

Congressional Republicans have praised Trump in the wake of the strike, the most significant U.S. action in the region in years, but Democrats are raising concerns that Americans could face dangerous long-term repercussions and are renewing complaints about the president's use of military force without informing Congress.

Democrats, while criticizing Soleimani and the role that he and Iran played in the region, are warning that the airstrike early Friday local time near the Baghdad International Airport marks a dramatic escalation of tensions between Washington and Tehran. 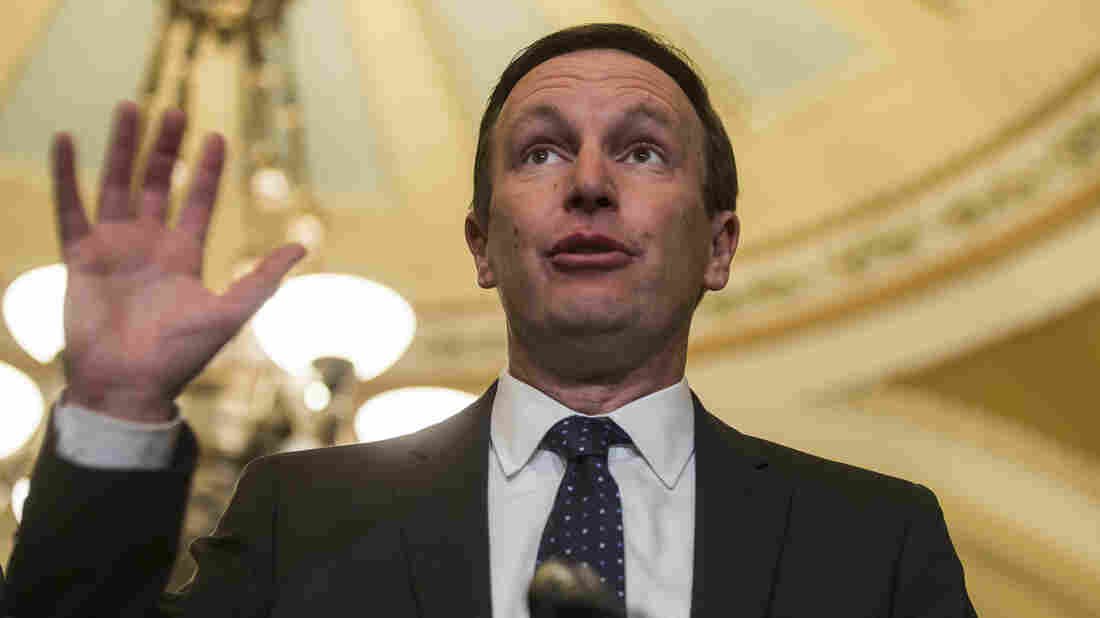 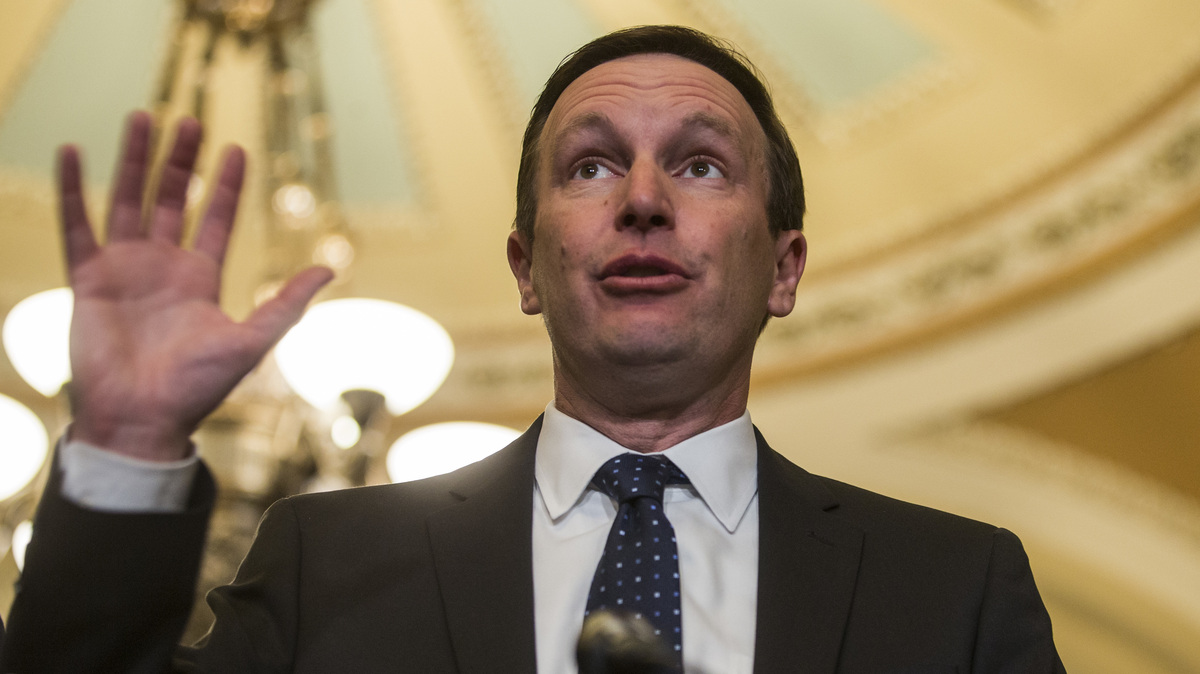 "The worry here, of course, is that this is actually going to get more Americans, not less Americans, killed," Connecticut Democratic Sen. Chris Murphy told NPR's Steve Inskeep on Friday. "Is Qassem Soleimani more dangerous as a martyr than he was alive as the functional leader of the Quds Force? There will be reprisals."

One key concern driving the split between Republicans and Democrats is outlook: It appears the White House only alerted certain Republicans on Capitol Hill of the attack ahead of time. Senior Democratic members of Congress, including House Speaker Nancy Pelosi, say they were largely left in the dark ahead of the strike.

Pelosi, who said Thursday that the strike "risks provoking further dangerous escalation of violence," didn't gather details of the operation until afterward, a congressional aide told NPR. The House speaker spoke to Defense Secretary Mike Esper for 13 minutes, around 9:40 p.m. Washington time after the airstrike, the aide said.

In the past, members of the Gang of Eight, the leaders of both the House and the Senate and the chair and ranking members of their respective intelligence committees, had been briefed on such operations. That was not the case this time, Senate Minority Leader Chuck Schumer said on the Senate floor Friday.

"This action may well have brought our nation closer to another endless war, exactly the kind of endless war the president promised he would not drag us into," Schumer, D-N.Y., said.

Moments earlier on the Senate floor, Majority Leader Mitch McConnell said he spoke to Esper on details of the attack on "Iran's master terrorist," adding he is working to coordinate a classified briefing for senators early next week.

"Although I anticipate and welcome a debate about America's interest in foreign policy in the Middle East, I recommend that all senators wait to review the facts and hear from the administration before passing much public judgment on this operation and its potential consequences," he said.

Earlier Friday, South Carolina Republican Sen. Lindsey Graham told Fox & Friends that he was told about the planned attack during a recent golf outing with the president. Graham was spotted at the president's course in West Palm Beach, Fla., on Monday.

"When it comes to the death of General Soleimani, there is no one to blame but himself," Graham tweeted Friday morning. "He effectively signed his own death warrant by planning massive attacks against U.S. personnel in Iraq and throughout the Middle East."

Other Republican lawmakers lauded the attacks in statements overnight, saying that Soleimani was a ruthless leader who directed the deaths of many Americans and others. He "got what he richly deserved, and all those American soldiers who died by his hand also got what they deserved: justice," Arkansas Republican Sen. Tom Cotton said shortly following news of the attack.

U.S. officials estimate Soleimani, his militia and their Iraqi proxies are behind the deaths of scores of American service members during the war in Iraq.

Democrats' criticism of the White House's failure to brief Congress ahead of the operation touches on a years-long debate that the president's war powers are woefully outdated. Democrats are leading calls for a new legislation addressing the president's Authorization for Use of Military Force, or AUMF.

Congress last issued these war power directives in 2001 and 2002 in the wake of the Sept. 11 attacks, and there has been a push to address Iran in a potential AUMF.

In June, a measure to ban unauthorized attacks on Iran or its officials failed in the Republican-controlled Senate by a vote of 50 to 40. On Friday, Virginia Democratic Sen. Tim Kaine said he had introduced a new war powers resolution to prevent further escalation of hostilities with Iran. "We're now at a boiling point, and Congress must step in before Trump puts even more of our troops in harm's way," he said.

Michigan Rep. Elissa Slotkin, a former CIA analyst who specialized in threats in the region, said the administration's next steps are critical.

It is critical that the Administration has thought out the moves and counter-moves this attack will precipitate, and is prepared to protect our diplomats, service members, and citizens serving overseas.

She noted that a new war power resolution is needed if further military actions against Iran were to continue.

"What always kept both Democratic and Republican presidents from targeting Soleimani himself was the simple question: Was the strike worth the likely retaliation and the potential to pull us into protracted conflict?" Slotkin said. "The two administrations I worked for both determined that the ultimate ends didn't justify the means. The Trump Administration has made a different calculation."