Accessibility links
After Qassem Soleimani Killing, 4 Questions On What's Next President Trump ordered the death of the best-known Iranian paramilitary commander in a move expected to yield shock waves across the world. What will happen now?

After A Bold American Gambit Against Iran, 4 Big Questions About What's Next

After A Bold American Gambit Against Iran, 4 Big Questions About What's Next 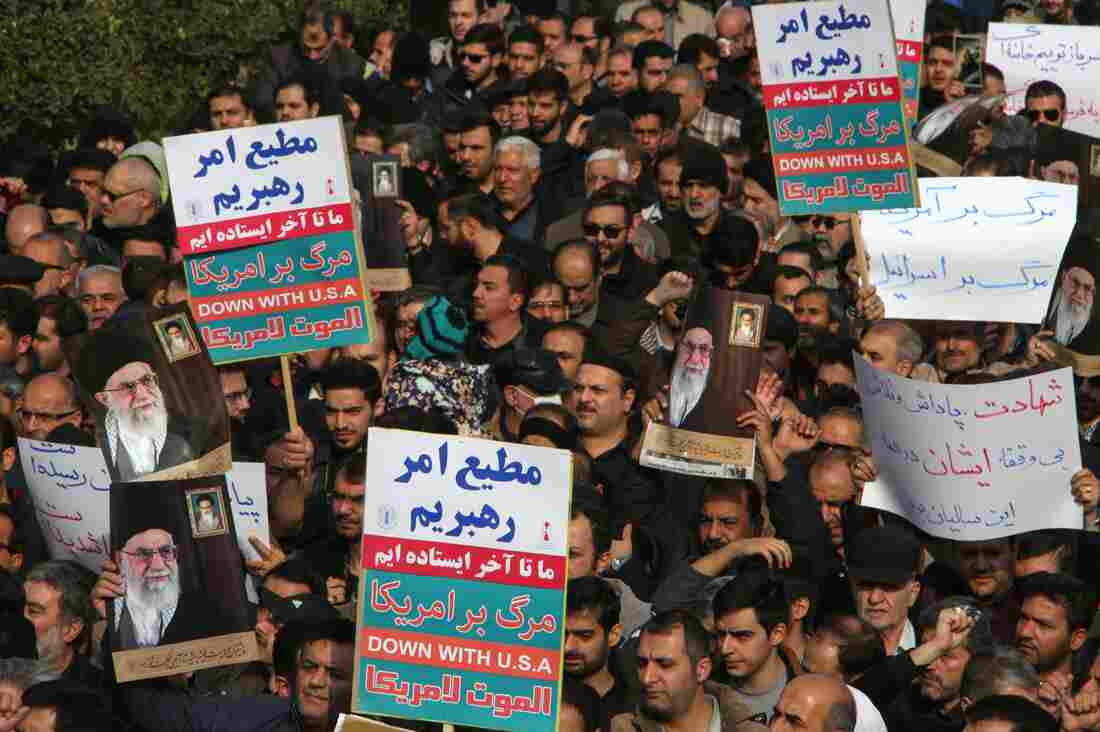 Iranians hold anti-U.S. banners during a demonstration in the capital, Tehran, following the killing of Qasem Soleimani by a U.S. drone strike. Atta Kenare/AFP via Getty Images hide caption 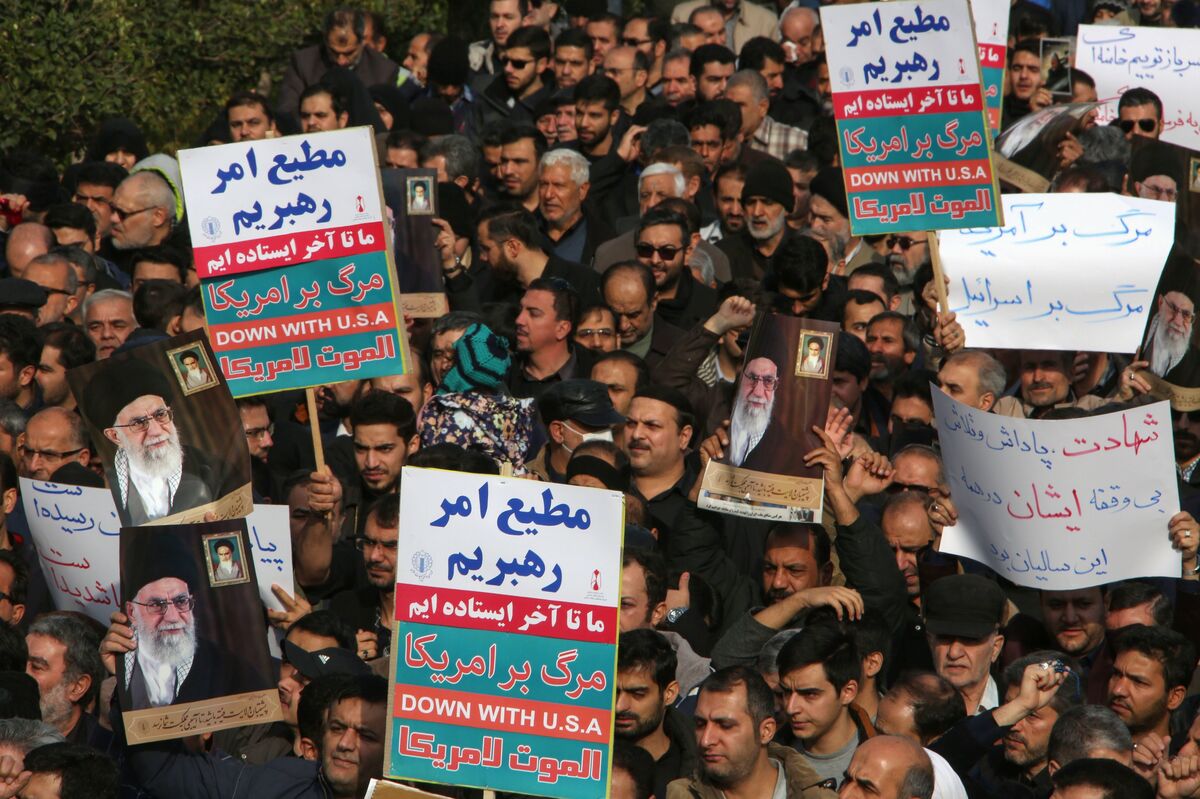 Iranians hold anti-U.S. banners during a demonstration in the capital, Tehran, following the killing of Qasem Soleimani by a U.S. drone strike.

President Trump ordered a bold strike against Iran this week that jangled the Middle East and Washington, drawing praise from allies, skepticism from critics and, most of all, questions about what comes next.

Soleimani was the highest-profile Iranian military leader and spent years cutting a swashbuckling figure across the Middle East, masterminding the operations of Iranian and proxy forces against adversaries in Israel, Syria, Iraq and beyond.

Trump's order to kill Soleimani cuts off the head of Iran's infamous Quds Force, the overseas arm of its Revolutionary Guard Corps, but it also brought quick vows by the Islamic Republic to avenge him.

How Tehran chooses to do that is one of myriad questions such as "what's next" and "what if" sparked by the attack on Soleimani and others near Baghdad's airport.

Will Iran go big or bide its time?

Iranian leaders appeared initially as stunned as many others by the news about Soleimani's death, but they did not appear to order a general wave of violence across the region as they might have.

Iran has operatives in nations across the Middle East and beyond. It also supplies and assists tens of thousands more local fighters. It has been waging proxy battles against Saudi Arabia and other enemies in Yemen; against Israel in Lebanon and Syria; against American forces in Iraq and elsewhere.

Iran also has a regular military apart from its Revolutionary Guards Corps with conventional ships, aircraft and other hardware.

In the past, it has threatened to close the Strait of Hormuz, the strategic chokepoint through which shipping passes between the Persian Gulf and the Arabian Sea.

Doing so could constrain the flow of energy to markets around the world and increase the price of oil. Indeed, oil prices spiked in the immediate aftermath of Soleimani's killing.

But Iran also is no match for the United States and its allies in a straight military confrontation. In the 1980s, the U.S. Navy skirmished with Iranian forces during a previous flare-up over oil tankers and the Strait of Hormuz. The Iranians did not fare well.

Since then, Iran has tried to fight Americans in situations it prefers — supplying deadly explosives to militants in Iraq, or anti-aircraft weapons to fighters in Yemen — rather than in set piece confrontations.

One question after Soleimani's death is whether that strategy will still apply or whether Iranian President Hassan Rouhani and his advisers may conclude they have nothing to lose from a widespread or conventional military response.

How will the United States react to the reaction?

From Washington's perspective, its targeting of Soleimani was a preventative measure to quash future attacks or incidents like the recent violence that targeted Americans in Iraq, Pompeo said.

And Trump has done more than simply order a drone strike.

American military commanders pushed a special unit of Marines to Baghdad to reinforce the embassy there after it came under attack by Iran-backed Shiite militia. The Pentagon also is deploying much of the 82nd Airborne Division as a quick-response force for the Middle East.

Our @Strike_Hold Paratroopers arrived at Ali Al Salem Air Base, Kuwait earlier today. Their deployment in support of U.S. Central Command is a precautionary action taken to respond to increased threat levels against U.S. personnel and facilities. https://t.co/8e8iKiB2vp

Some 90,000 Americans already are deployed to the region in all branches of the military and in units that serve at sea, in the air and ashore. The Air Force's new F-35A Lightning II stealth fighter is among them.

American facilities across the Middle East have been put on high alert, and Americans generally are being counseled to get out of the region.

Trump and his advisers, in short, prepared for any major reaction to Soleimani's death.

The question now is whether American forces more broadly will try to simply withstand any Iranian riposte or whether their orders are to respond with greater strength. In other words, will American troops just defend American installations or would they go on offense against Iran itself?

America must impose a calculation on Tehran that more attacks on an embassy, for example, would not only involve threats to the fighters involved but also to Iran's productive infrastructure at home, Graham and others argue.

Will Trump and his commanders listen? How will they calibrate their orders to American military forces to preserve Pompeo's objective not to spark a hotter conflict?

What does this mean for diplomacy?

Has Soleimani's death poisoned the prospect for renewed negotiations between the United States and Iran? Or will the demonstration of American power prompt Tehran to reassess?

The overall situation between the two nations already was at a low ebb.

In 2018,Trump abrogated America's participation in the Iran nuclear agreement concluded by President Barack Obama — not because Iran had violated it but because, Trump argued, Iran's other malign activities had endured and the deal gave Iran too many concessions in exchange for little.

Trump and Pompeo then said they would apply "maximum pressure" to Iran with new sanctions to compel it to renegotiate the nuclear deal in a way more to the administration's liking.

Rouhani and Iran's leaders balked, opting instead to try to compel American capitulation with a campaign of violence. Iranian forces targeted shipping in the strait, American drones and, more recently, American installations in Iraq along with Iraqi proxies.

What wasn't clear on Friday morning was whether the American assassination of Soleimani would so enrage and embitter Iran's leaders that the path to a new settlement could be closed off for good — or whether it might make a return to negotiations more likely.

Soleimani was described as an "indispensable man." Now that Iran's regime is without him, will the absence serve as an incentive to come to terms or as a martyr whose ghost spurs on more intransigence?

What are Trump's intentions for the Middle East?

Trump has spent his relatively brief political career as a critic of U.S. adventures across the Middle East.

"Let someone else fight over this long bloodstained sand," he said in October when announcing a drawback of American forces in Syria.

During a Thanksgiving visit, the president told American forces in Afghanistan he had restarted peace talks with the Taliban — having abandoned them a few months before — and that he hoped they might all be home to celebrate Thanksgiving next year at home.

At the same time, however, the United States has only scaled up its military deployments across the region, including with troops posted to Saudi Arabia and elsewhere in response to previous violence by Iran, including its attack on a major Saudi oil refinery.

Now American forces are on high alert poised to try to defend embassies, bases and other facilities from an Iranian response to Soleimani's death.

Does Trump have a road map to align the facts on the ground with his own aspirations?