Accessibility links
Fugitive Carlos Ghosn Escaped House Arrest By Walking Out, Not In Box, Officials Say Surveillance video taken outside of former Nissan executive's Tokyo home shows him leaving the house around noon. The new evidence appears to debunk theories that he escaped in a large box. 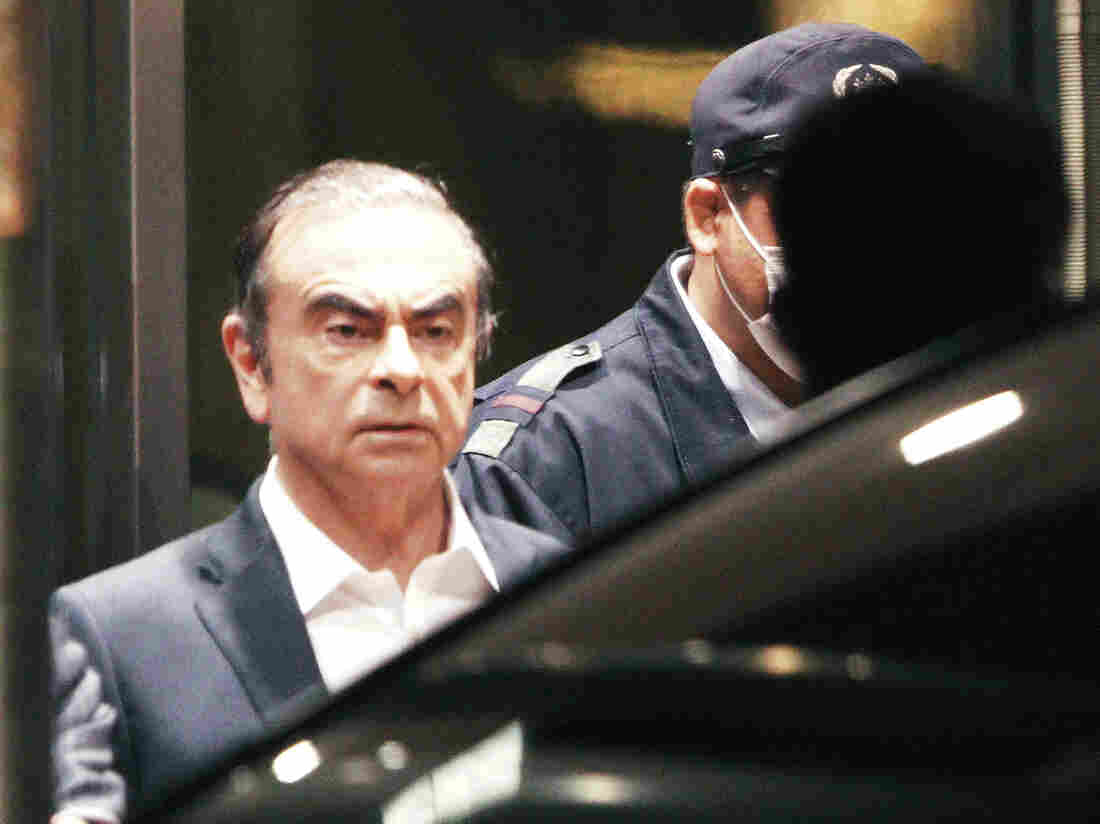 Former Nissan Chairman Carlos Ghosn, pictured leaving the Tokyo Detention Center in April, is believed to have escaped with the help of several individuals. So far, Turkish authorities have arrested 12 people in connection with the auto executive's getaway. Eugene Hoshiko/AP hide caption 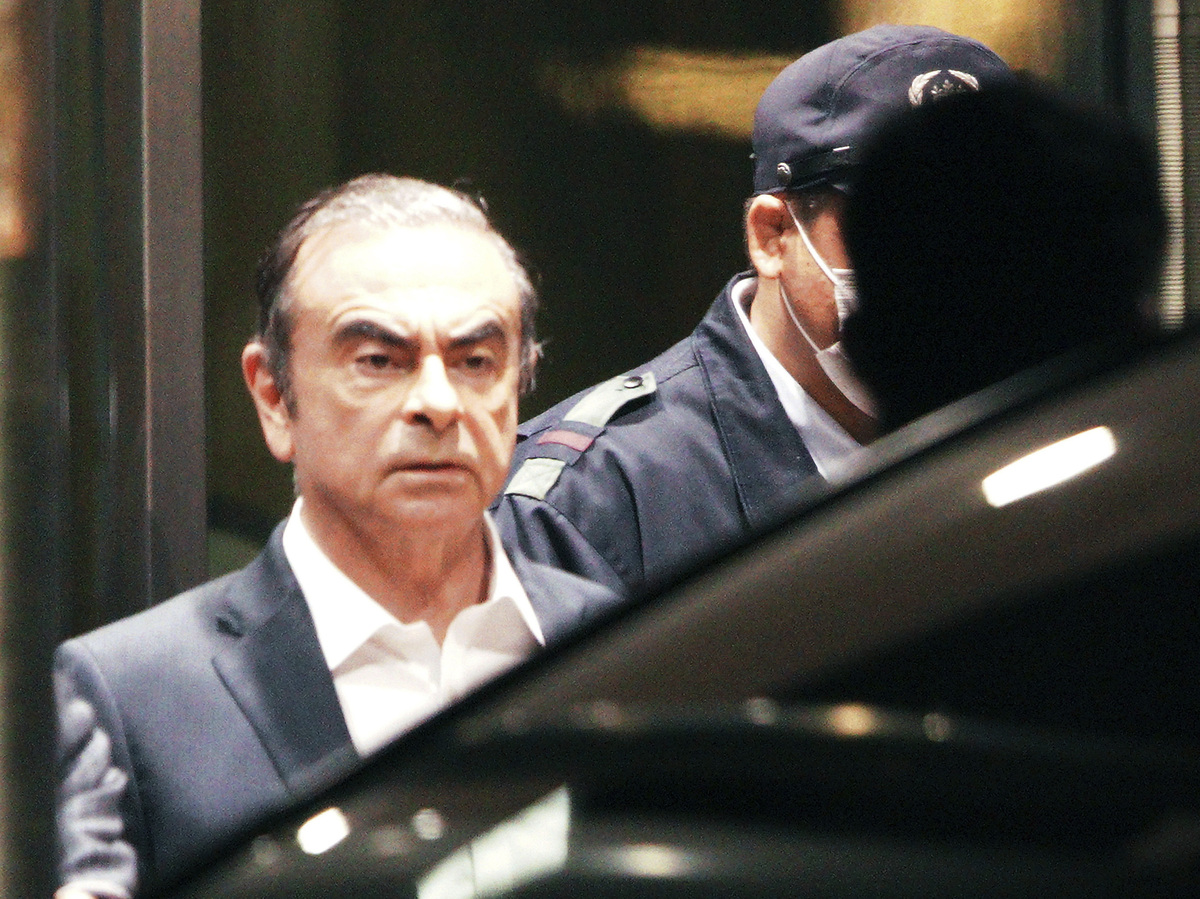 Former Nissan Chairman Carlos Ghosn, pictured leaving the Tokyo Detention Center in April, is believed to have escaped with the help of several individuals. So far, Turkish authorities have arrested 12 people in connection with the auto executive's getaway.

As international law enforcement authorities try to figure out how former Nissan boss Carlos Ghosn escaped from Japan to Lebanon while the millionaire was out on bail, some pieces of the puzzle are falling into place.

Investigators said "the camera did not capture any other suspicious persons entering or leaving the home around the time Ghosn came out," according to the Japanese news outlet.

The new footage appears to debunk theories that Ghosn had out-foxed law enforcement by climbing into a large box for musical instruments after a band had played at the family home.

NHK added that police suspect that Ghosn met up with someone after leaving the house and before heading to the airport.

Ghosn is accused of financial misconduct, including embezzlement and making an unauthorized multimillion-dollar payment to a Nissan dealership in Oman. He had been awaiting trial in Tokyo, released on $14 million bail in April.

In absconding to Beirut, Ghosn forfeited the full amount of the bail, Japanese authorities said.

In the days since the surprisingly mundane escape, authorities say Ghosn likely drove from Tokyo to Osaka where he flew out of Kansai International Airport to Istanbul and then on to Beirut, his childhood home.

Although he was under surveillance, it appears Japanese officials were rather lax in monitoring his comings and goings. Recordings pulled from cameras outside Ghosn's home were only reviewed once a month as were "records of his meetings, of his mobile phone calls and of his Internet use at a computer in his lawyer's office," The Washington Post reported.

They are accused of human trafficking.

A day earlier, another seven people — four pilots and three ground staff — were detained in connection with Ghosn's surreptitious departure.

The arrests followed an investigation into two private planes operated by MNG Jet that landed at Ataturk Airport in Istanbul. One arrived from Osaka on Dec. 29, the other departed to Beirut on Dec. 30.

In a statement, MNG Jet explained that two jets were leased by private clients "seemingly not connected to each other" and that Ghosn's name did not appear on any of the official documentation of the flights.

However, "one employee of the company, who is under investigation by the authorities, has admitted having falsified the records," MNG Jet said, clarifying that the company does not own the jets, but merely operates them.

The same employee confirmed "that he acted in his individual capacity, without the knowledge or the authorisation of the management of MNG Jet," the company stated.

It remains unclear how the well-known auto executive evaded detection at the Osaka airport.

But Lebanese news outlet MTV reported: "The slightly built Nissan boss does have experience in disguises: when first released on bail in March, he walked out of the detention center disguised as a workman to avoid media."

Upon arriving in Beirut, the 65-year-old denounced the Japanese legal system.

"I am now in Lebanon and will no longer be held hostage by a rigged Japanese justice system where guilt is presumed, discrimination is rampant, and basic human rights are denied," he said in a statement.

He has denied all wrongdoing.

Ghosn, who was born in Brazil but raised in Lebanon, is a local hero there. As NPR reported:

"Ghosn's supporters contend that after having rescued Nissan from near bankruptcy in the late 1990s, he is being ostracized by Japanese authorities seeking to undermine his efforts to meld Nissan with the French automaker Renault, which he also once headed."

"The prosecution received the warrant, and it will endeavor to take the required measures related, including the interrogation of [Ghosn]," Justice Minister Albert Serhan said, according to state-owned National News Agency.

Serhan noted the absence of an extradition treaty between Lebanon and Japan, adding that Lebanese internal laws would be implemented.