Accessibility links
Hawaii's Threatened Seabird, Newell Shearwater, Stives To Make Comeback One of Hawaii's most threatened seabirds, the Newell's shearwater, makes its home on the island of Kauai. Conservationists there are fighting to keep the iconic bird from disappearing. 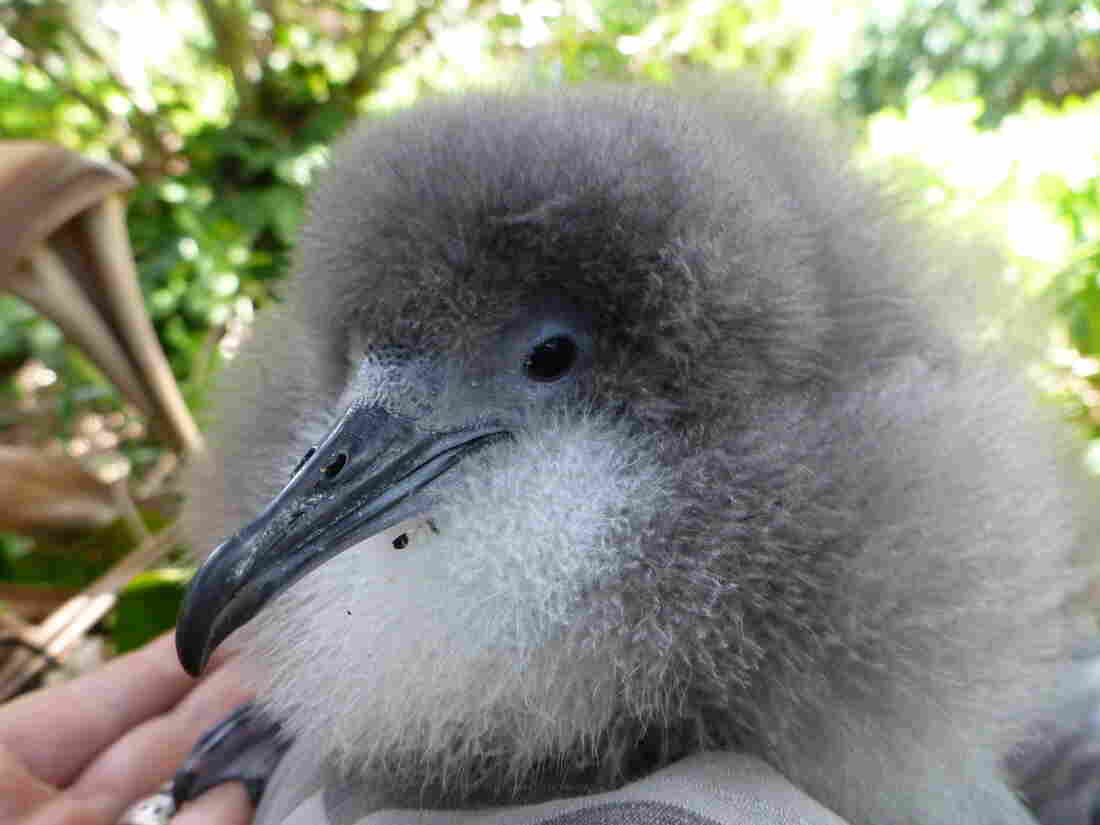 This Newell's shearwater chick makes its home on the Hawaiian island of Kauai. The seabird is classified as "threatened," according to the Endangered Species Act. André Raine/Kauai Endangered Seabird Recovery Project hide caption 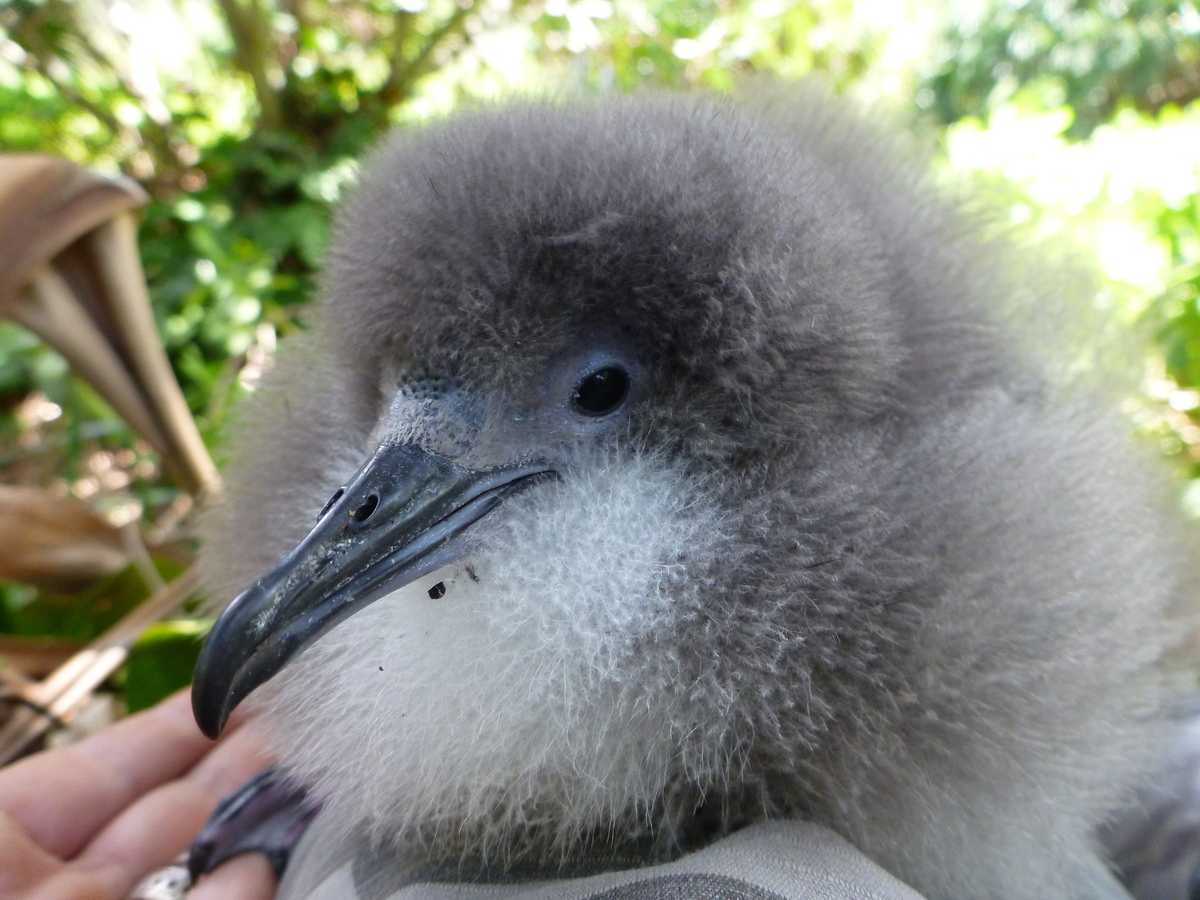 This Newell's shearwater chick makes its home on the Hawaiian island of Kauai. The seabird is classified as "threatened," according to the Endangered Species Act.

Hawaii is known as a natural paradise. It's also known as the endangered species capital of the world. One of the state's most threatened seabirds, the Newell's shearwater makes its home on the island of Kauai, where a small group of environmentalists is working to keep the iconic seabird from disappearing because of collisions with power lines and confusion from artificial light.

The battered Dodge Durango that belongs to the Kauai Endangered Seabird Recovery Project has a lot of hard miles on it. The SUV rolls over the asphalt near a harbor on Kauai's west side. Behind the wheel is the project's coordinator, seabird biologist André Raine.

"This area here is kind of like a microcosm of the urban threats that these birds face," says Raine. "You've got the power lines, you've got the lights. We've had multiple birds down here."

Raine points to an area he calls Nesh Corner, "nesh" for Newell's shearwaters because so many downed birds have been found there. According to Hawaiian legend, the birds were once so plentiful that they darkened the skies. But in the past couple of decades, the bird's population has plummeted. It's now listed as "threatened" under the Endangered Species Act.

The challenges to the Newell's shearwater's survival begin in the mountains of Kauai where they nest in burrows. "You've got this little chick that's sitting up in the mountains in the darkness completely oblivious to all that's going on around it in terms of all these threats that humans have brought to this island," says Raine.

A Newell's shearwater chick looks as if it is wearing an oversized grey mohair hoodie. If it survives the perils of the mountains, feral cats and rats, the fledgling will be drawn by instinct to take flight to the sea.

Raine says the bird navigates by the moon, unaware of the imposters in its path— artificial lights. "They circle the lights and end up collapsing, falling onto the ground where they are either run over by cars or eaten by cats and dogs."

In addition to light attraction, power line collisions kill up to 1,600 adult seabirds a year, according to Raine.

"To see them hitting power lines in huge numbers, to see fledglings that have somehow survived their time in the mountains sitting by the side of a road," Raine says. "Seeing that over and over again is extremely frustrating." 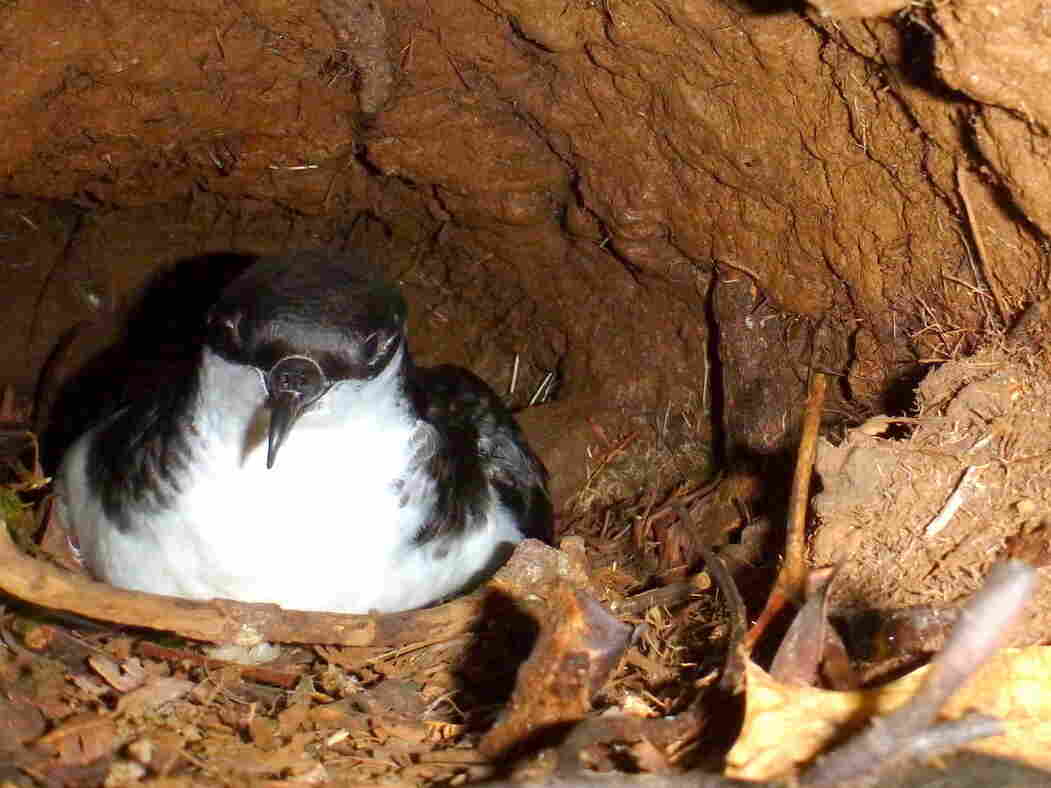 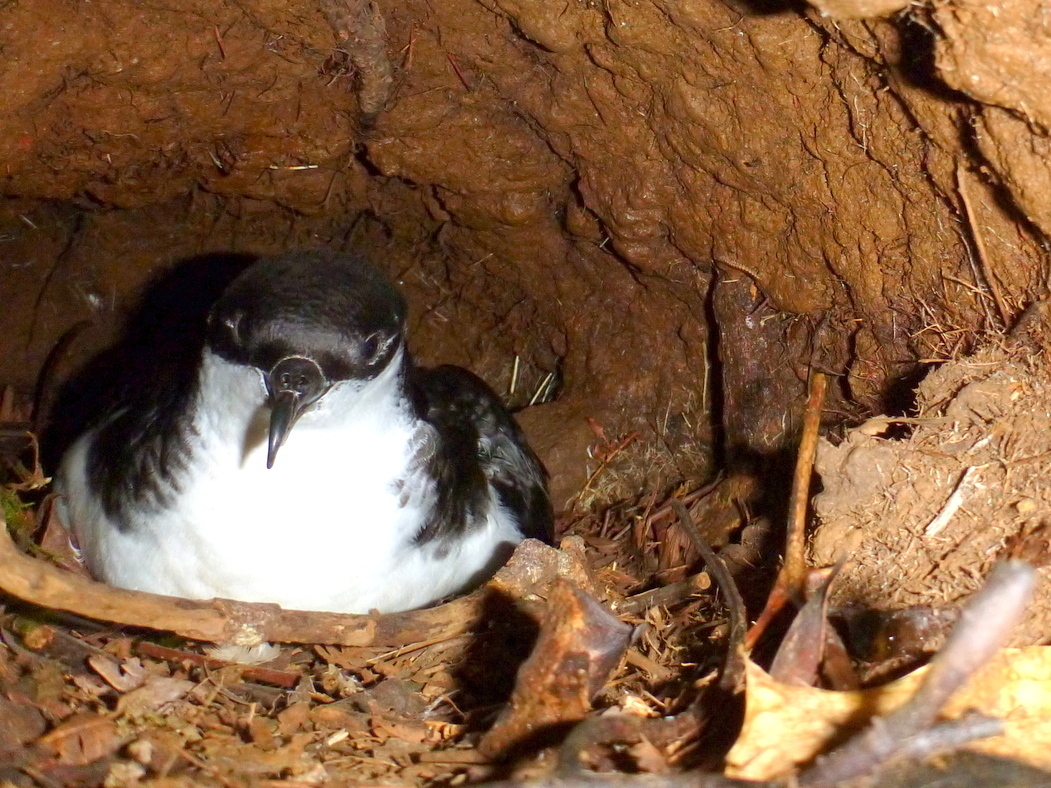 A Newell's shearwater nests in mountain burrows on the Hawaiian island of Kauai.

If found, the grounded and injured birds may get a second chance at Save Our Shearwaters' bird hospital located in Kauai's Humane Society. Because the birds have federal protections, the facility is permitted by the state and U.S Fish and Wildlife Service.

Jacqueline Nelson, a wildlife rehabilitation technician, is examining one of three injured birds brought in for an exam. The bird's black head peeks out from under a pink towel. Nelson gently checks its wings. "And then we'll check for collision scuffs," she says.

After a thorough examination Nelson smiles. "I think he's going to be a quick turnaround."

The program is funded by Kauai Island Utility Cooperative. In 2010, the power company, along with the County of Kauai, was named in a lawsuit filed by environmental groups. In that litigation, the utility was found to be in violation of the Endangered Species Act for causing seabird deaths.

Makaala Kaaumoana is with Hui Hoomalu I Ka Aina, a Native Hawaiian organization that was one of the plaintiffs in the 2010 lawsuit. "When we thought it couldn't get any worse and it did," she says of the bird's numbers.

Kaaumoana says the Newell's shearwaters play an important role in the culture and ecology of Kauai. She's saddened by the recent population decline.

"There's room for blame for everyone," Kaaumoana says. "But according to the latest information that has been scientifically collected, the utility is responsible for the largest number of take of this species."

Kauai's power utility declined a request for an interview but said in a statement that it is in full compliance with the current Habitat Conservation Plan, which was developed after the lawsuit in order to comply with requirements of the Endangered Species Act. The utility says it's moving some power lines underground and is reconfiguring and lowering others to further minimize and mitigate effects on seabirds.

On a wind-swept volcanic cliff, Save Our Shearwaters wildlife rehabilitation technicians Jacqueline Nelson and Mikaela Aroff are getting ready to release rehabilitated seabirds.

The birds crane their necks and look out to sea. They wobble a bit in the wind as crashing turquoise waves from below send small showers of spray in the air. Native Hawaiians call the Newell's shearwater the Ao, a name related to the sound of its call, which some describe as sounding like the bray of a donkey.

If the seabirds take flight, they will spend three to four years on the ocean before returning to the island. Nelson and Aroff gently lift them up so they can feel the air under their wings.

"There he goes," says Nelson. "I had a good feeling about that one."

And, so it goes with each of the five birds, one by one until only one remains behind. This was his fourth trip to the ocean. The young women don't give up, holding him high, cheering him on, until he too takes flight.

"There he goes," says Nelson, as the rehabilitated Newell's shearwater soars higher than all the others. She and her colleague watch until the bird is out of sight.