Accessibility links
Mumbai Takes Its Vintage Padmini Taxis Off The Road For Good Residents of India's big financial city hail the end of an era as their classic black and yellow cabs ride off into the sunset. 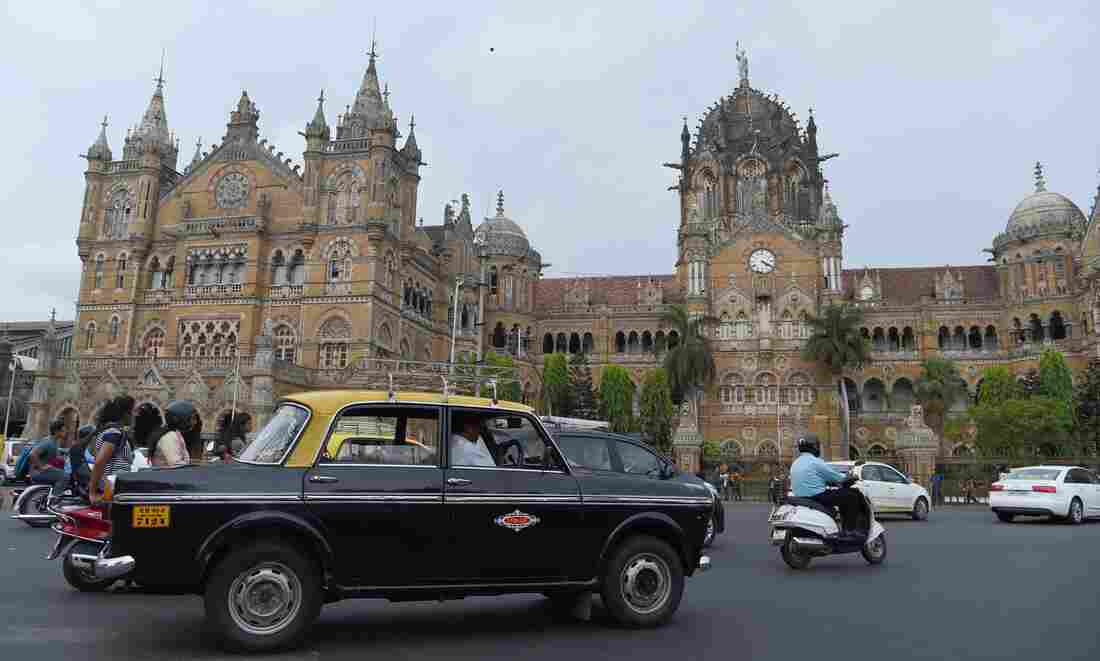 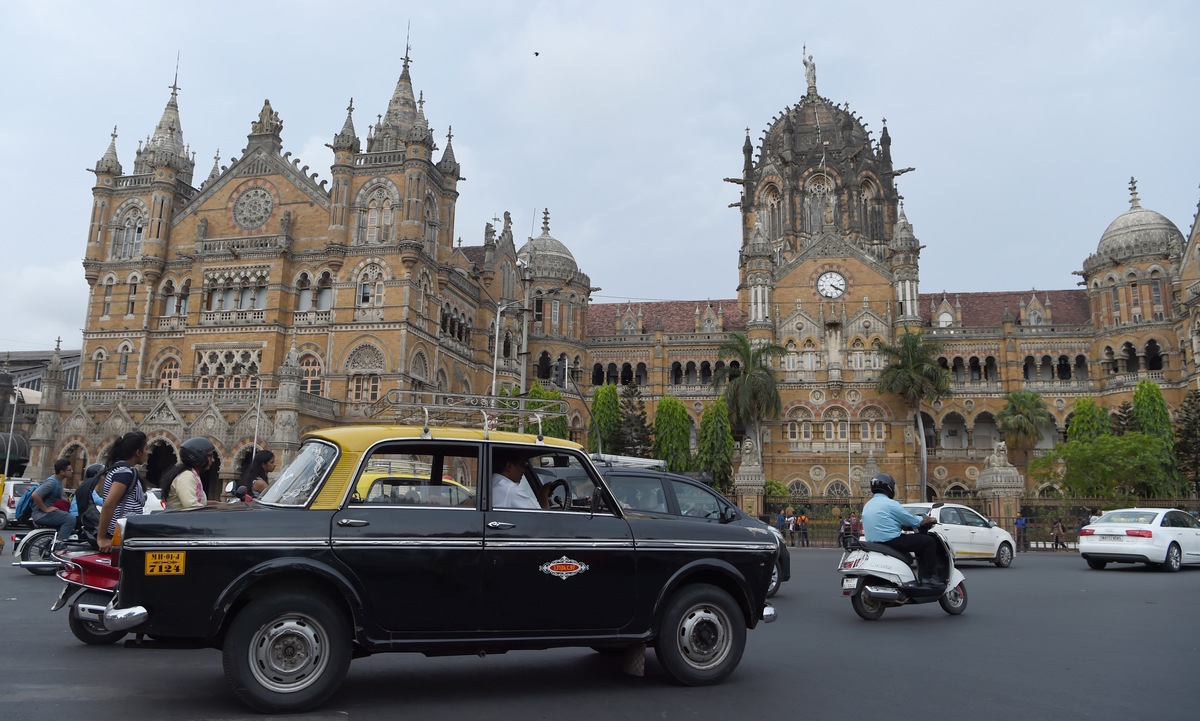 At the edge of a tree-lined lane in Mumbai, India, Abdul Kareem opens the hood of his taxi and pours water into the radiator. The car is black with a yellow roof, like all Mumbai cabs. But it stands out in a line of cars.

It's antique-looking and kind of boxy, with bulbous headlights. It has a metal luggage rack on its roof that proclaims "Mumbai" in bright orange lettering. On the streets, Kareem says, people point out the taxi to their kids.

A generation ago, India's financial capital Bombay became Mumbai. Its cotton mills were redeveloped into swanky malls and offices. Hipster bars replaced the city's historical Irani cafes. Now another Mumbai icon is riding off into the sunset: the vintage black and yellow taxi. 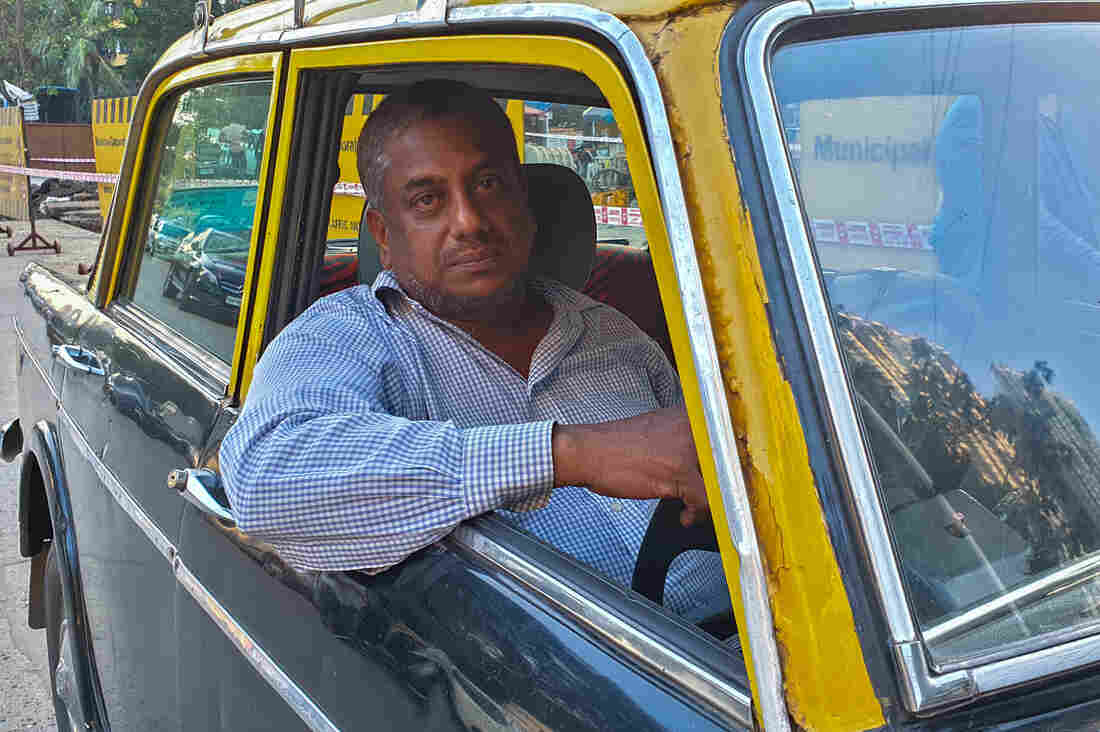 Abdul Kareem sits behind the wheel of his Premier Padmini taxi — which will go off Mumbai's streets by the summer. Sushmita Pathak/NPR hide caption 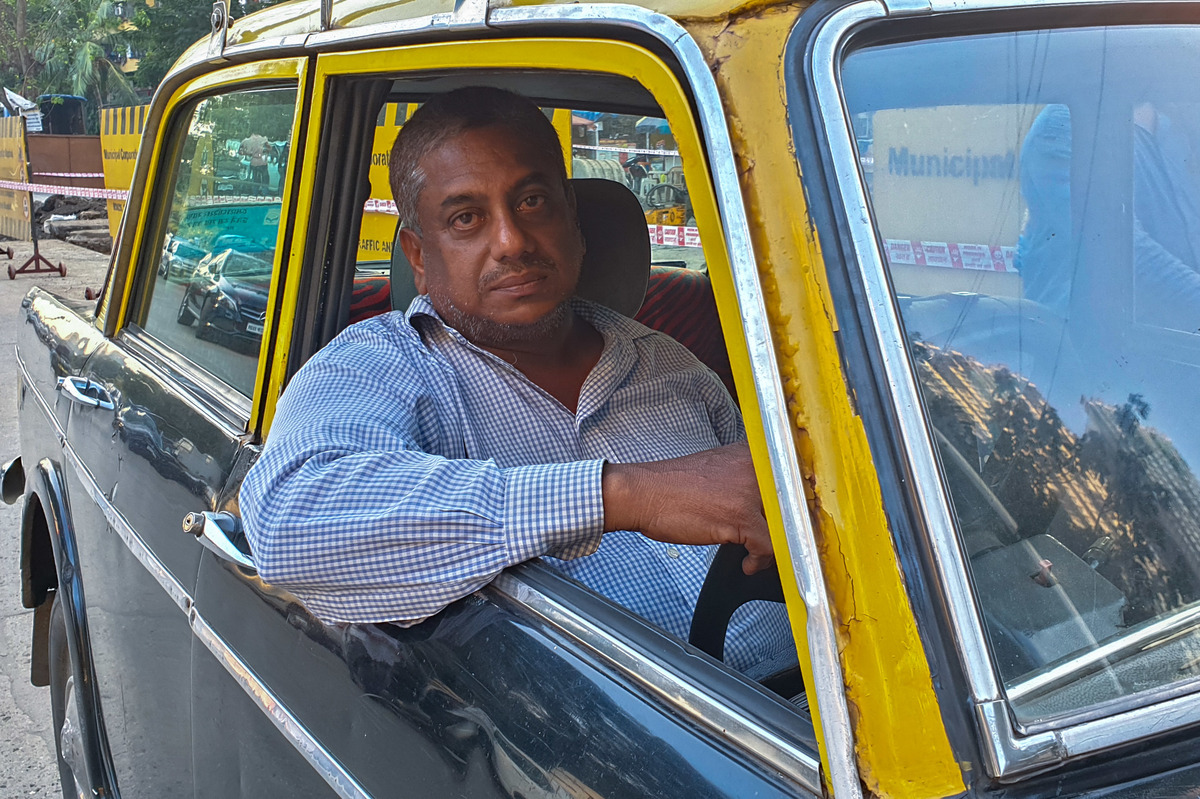 Abdul Kareem sits behind the wheel of his Premier Padmini taxi — which will go off Mumbai's streets by the summer.

The car — an Indian version of the Italian model Fiat 1100 — made a debut on India's streets in the 1960s. It was manufactured in India by a local company, Premier Automobiles Ltd. The car was named Premier Padmini, after a legendary Indian royal. Early posters advertise the car as "a beautiful princess of your own," with a picture of an Indian woman decked in gold jewelry.

In the 1980s and 1990s, Premier Padmini became synonymous with Mumbai taxis. In its heyday, some 60,000 Padmini taxis plied the city's streets, according to Anthony Lawrence Quadros, general secretary of the Mumbai taxi drivers' union.

"It's an iconic car which has served millions of people," Quadros says.

In 1991, when India's government passed reforms allowing more private competition in the economy, global companies started flooding the Indian market. The Padmini, which hadn't had an update in years, had to compete with modern, foreign cars equipped with the latest technology. Premier Automobiles suffered huge losses and stopped production in 2000. 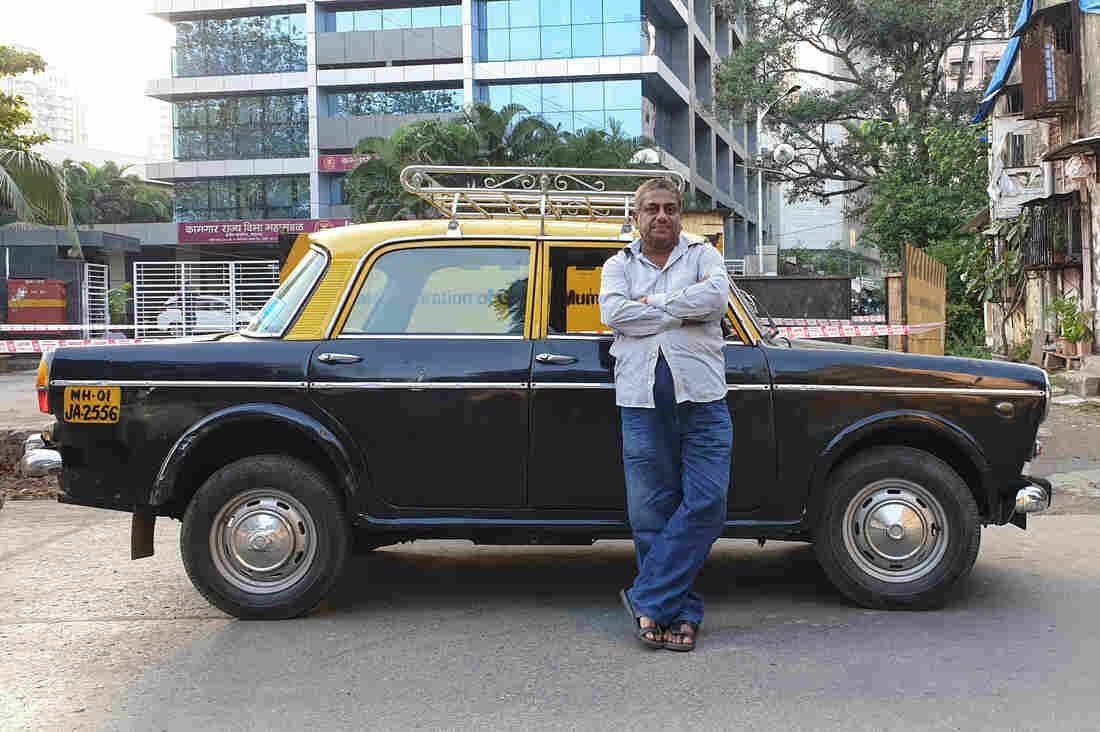 Cabbie Abdul Kareem poses with his Premier Padmini taxi — one of only about 50 that were still on Mumbai's streets as of December. Once ubiquitous, the Padmini is being replaced by modern cars. Sushmita Pathak/NPR hide caption 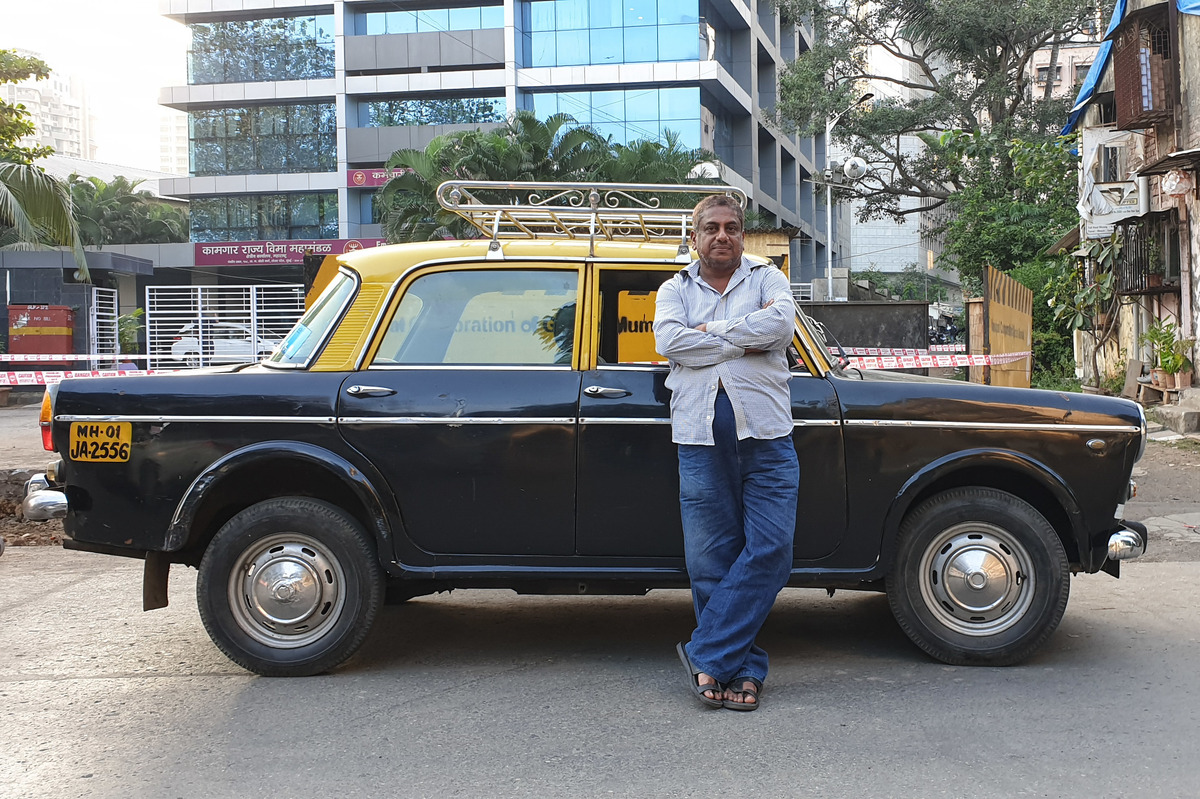 Cabbie Abdul Kareem poses with his Premier Padmini taxi — one of only about 50 that were still on Mumbai's streets as of December. Once ubiquitous, the Padmini is being replaced by modern cars.

Then, in 2008, the government of the state of Maharashtra, whose capital is Mumbai, started to phase out older cars to reduce pollution. They banned all taxis that were older than 25 years. In 2013, they revised the rule and made the age limit 20.

A lot of taxi drivers and owners became unemployed, says Quadros. Some had taken out loans for their vehicles and their lives were ruined, he says.

Thousands of Padmini taxis suddenly vanished from Mumbai's streets. Sixty-year-old Ram Vilas Maurya's cab was one of them.

The modern car he now drives gets a dent even at the slightest collision, he says. Padmini wasn't like that, he adds.

Maurya smiles as he reminisces about his Padmini, which was also his first vehicle when he started driving taxis in Mumbai some 30 years ago. "I used to take my kids to the beach on weekends in that car," he says.

This year, even the youngest Padminis will have to go. It's already very hard to spot one. Only about 50 were left as of December, according to Quadros.

And Mumbai residents have started noticing their absence.

"When you're trying to get to the airport and you have all these suitcases, you realize the new taxis that run on compressed natural gas have cylinders in the back and there's not a lot of space," says 37-year-old Rachel Lopez, a lifelong Mumbai resident. The Padmini, on the contrary, had a huge trunk space as well as an overhead carrier.

What else was different about riding in a Padmini cab? For one, Lopez says, you needed good upper-body strength to travel.

"They wouldn't close with a polite little click," she says. "You had to really kind of bash them in and then you hear a metallic thud and you knew the door had closed."

Even though she misses them, Lopez says she's not sad to see the Padminis go. They deserve a little rest now, she says. It also symbolizes how Mumbai operates.

"Something old has to go to make room for something new," says Lopez.

But before it disappears, it needs to be chronicled, says Lopez. A few years ago, she took it upon herself to document one classic feature of Mumbai's taxis: their funky, vibrant ceilings. Her Instagram page @thegreaterbombay has hundreds of photos of weird designs and patterns that adorn Mumbai's black-yellow taxi ceilings.

Celebration time on my #mumbaitaxi #ceiling. It's December. It's finally going to be cooler in Mumbai. I have dinner parties planned. Some holiday leave. Gifts. And the close of a good year! What has 2019 been like for you? Tell me 🚖 ♥ #Mumbai #India #kaalipeeli #taxi #cab #print #pattern #design #graphicdesign #visualart #surfacepattern #patterndesign #motif #colour #decor #interiors #art #thisisart #creative #symmetry #photoseries #lookup #forehead #selfie #december #2019 #recap #fruits

The humble Padmini taxi that served commuters for decades has now become a muse for artists and photographers. Finnish photographer Markku Lahdesmaki is one of them.

In the spring of 2011, when Lahdesmaki came to Mumbai for work, the scene that greeted him outside the airport surprised him.

"I saw these hundreds of very cool looking vintage taxi cars and I was like, wow," Lahdesmaki says.

Over the next three days, he traveled across the city to take pictures of these cabs in interesting scenarios. What struck him the most, he says, was that all the cabbies were very proud of their taxis.

"When I was riding in this Padmini taxi, I felt like I was in a movie," says Lahdesmaki.

Some of Lahdesmaki's photos from the project have been adapted for T-shirts and caps.

When he heard that the government was phasing out the Padmini taxis, Lahdesmaki says he decided to buy one himself. He's trying to get it shipped to Los Angeles, where he now lives.

They may not be sleek and powerful like their modern counterparts but Padmini taxis still have their fans.

Recently, Kareem picked up a man in his still-legal Padmini near a railway station. The passenger had a high-end chauffeur-driven car waiting for him. But he got into the cab instead and asked Kareem to follow his car. The man just wanted to take a Padmini taxi, for old times' sake.