Accessibility links
DHS, USCIS, CBP, ICE Share Data With Census After Trump's Executive Order The Department of Homeland Security has finalized an agreement to share records that the Census Bureau says will help it produce data about the citizenship status of every person living in the U.S. 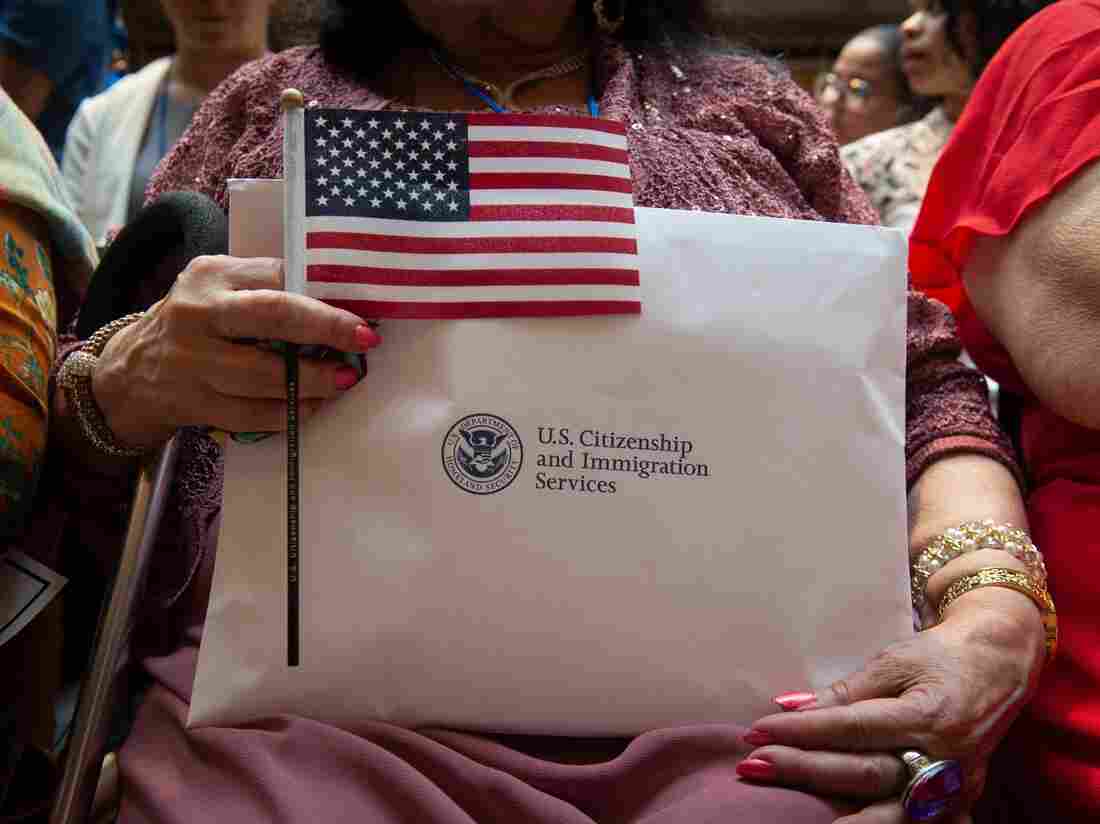 A newly sworn-in U.S. citizen holds the U.S. flag and paperwork during a 2018 naturalization ceremony in New York City. The Department of Homeland Security has agreed to share its records with the U.S. Census Bureau to help produce data about the U.S. citizenship status of every person living in the country, as ordered by President Trump. Bryan R. Smith/AFP via Getty Images hide caption 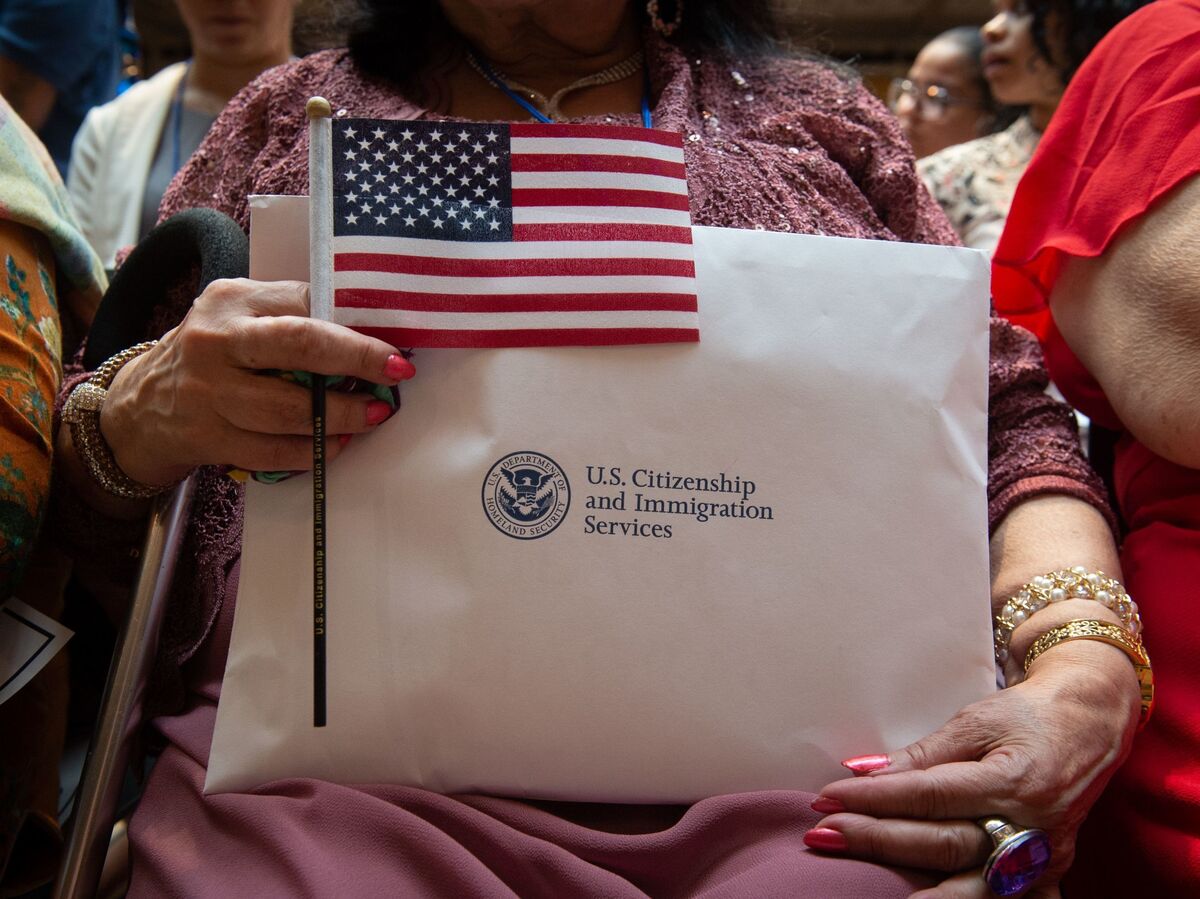 A newly sworn-in U.S. citizen holds the U.S. flag and paperwork during a 2018 naturalization ceremony in New York City. The Department of Homeland Security has agreed to share its records with the U.S. Census Bureau to help produce data about the U.S. citizenship status of every person living in the country, as ordered by President Trump.

The Department of Homeland Security has agreed to share certain government records from its databases to help the Census Bureau produce data about the U.S. citizenship status of every person living in the country.

DHS quietly announced the data-sharing agreement in a regulatory document posted on its website on Dec. 27. It marks the latest development in the Trump administration's ongoing effort to carry out the executive order President Trump issued in July after courts blocked the administration from adding a citizenship question to the 2020 census.

Two weeks after the U.S. Supreme Court ruled last year to keep the citizenship question off, President Trump said in the executive order that releasing citizenship data based on existing records would allow states to redraw voting districts using the number of eligible voters rather than all residents in an area — a method of redistricting that a prominent GOP strategist concluded would politically benefit Republicans and non-Hispanic white people.

According to the DHS document, which was first reported by Federal Computer Week, U.S. Citizenship and Immigration Services is sharing personal information about naturalized U.S. citizens and green card holders from records going back to as early as 1973.

More recent records dating to 2013 from Customs and Border Protection, as well as Immigration and Customs Enforcement, will provide the Census Bureau with data such as noncitizens' full names, birth dates, addresses, Social Security numbers and alien registration numbers. CBP is also sharing the travel histories of visitors to the U.S., including those who have overstayed their visas.

Federal law restricts the release of immigration records about survivors of human trafficking and of certain other crimes who have applied for special visas, as well as survivors of domestic abuse who have applied for immigration benefits under the Violence Against Women Act. Still, USCIS has asked for permission to release to the Census Bureau data about refugees and asylum-seekers, whose records generally cannot be shared without their consent or a waiver signed by the Homeland Security secretary.

The bureau plans to use the data it does receive to try to match the DHS records with those from other agencies about the same person. Each individual's records would then be used in a statistical model designed to produce anonymized estimates of U.S. citizens and noncitizens living in the country.

It is unclear, however, whether this process will be able to accurately determine the citizenship status of individuals. "No one source of citizenship information is complete and up-to-date," the DHS document — known as a privacy impact assessment — warns, while noting that misidentified individuals would receive "no adverse impact" because the efforts are only for "statistical purposes."

Still, Latinx community groups represented by the Mexican American Legal Defense and Educational Fund and Asian Americans Advancing Justice - AAJC are currently suing the administration, arguing that its data efforts are part of a conspiracy to stop Latinx communities, noncitizens and other immigrants from receiving fair political representation.

Meanwhile, the administration has spent months trying to amass citizenship records from other federal agencies, including the State Department and the Social Security Administration, plus states. In November, Nebraska became the first state to agree to share its driver's license records with the Census Bureau.

The data DHS provides "will not be used to make programmatic or administrative enforcement decisions," according to the document the department released last week.

Instead, the document says DHS is providing the records as required by Trump's executive order to help determine numbers of three specific groups: "citizens, lawfully present non-citizens, and unauthorized immigrants in the United States during the decennial census."

While Trump's order does reference a need for a "more reliable" count of unauthorized immigrants to better inform public policy about immigration and eligibility for public benefits, the Census Bureau has not publicly acknowledged any plans to create such an estimate.

During public meetings in September, the Census Bureau's chief scientist, John Abowd, confirmed that the executive order — along with a filing to the White House's Office of Management and Budget, which reviews all federal government efforts to collect information — "commit" the bureau to releasing citizenship data by the end of March 2021, in time for the next round of redistricting.

The bureau's public information office has not responded to NPR's questions about whether it's planning to produce a count of unauthorized immigrants in response to the executive order.

The bureau is currently fighting off a lawsuit by the state of Alabama and Rep. Mo Brooks, a Republican from that state, which is arguing in court to get unauthorized immigrants excluded from census numbers used to determine the distribution of congressional seats among the states.

Both the bureau and the Department of Homeland Security's office of public affairs have also not responded to NPR's questions about when the new data-sharing agreement was signed and if any data have been transferred yet.

Plans for DHS to share data with the bureau through this agreement have been in negotiations since early 2018, when the bureau officials began scrambling to respond to the Trump administration's last-minute request to add a citizenship question to the 2020 census.

Census Bureau officials have long advocated for the administration to rely on existing government records as a way to produce citizenship information that the bureau's researchers say is more accurate and less expensive than collecting self-reported responses to a census question. In 2018, Commerce Secretary Wilbur Ross, who oversees the Census Bureau, approved adding the question to census forms and directed the bureau to request records from other agencies and state governments.

Still, the DHS document lays out a number of risks involved with sharing data with the bureau, including a concern that doing so is "not compatible with the original purpose" of DHS agencies collecting the information. It also flags the risk that the people whose information DHS is sharing with the Census Bureau may not want that to occur.

The document says, however, these risks "cannot be mitigated" and that Trump's executive order requires DHS to comply with the bureau's data requests.

Some privacy advocates have raised their own concerns about the potential misuse of data, especially at a time of increased immigration enforcement. Using the information to try to identify noncitizens "implicates fundamental due process rights and will impact both citizens and non-citizens," wrote Marc Rotenberg, president of the Electronic Privacy Information Center, in a July letter to leaders of the House Oversight and Reform Committee.

On top of those concerns, it's not clear exactly how accurate the data produced using the existing records will be. The DHS document acknowledges it is "notoriously difficult" to use data to determine a person's current immigration status because "individuals can have multiple immigration statuses through their lifetime."

"Because DHS is providing information at a point in time," the document says, "it is reasonable to believe that eventually data accuracy issues may arise."