Accessibility links
Was The Killing Of Qassem Soleimani Legal? The strike against Qassem Soleimani raises thorny legal questions — and experts disagree over whether the U.S. had the legal authority to do it.

Was It Legal For The U.S. To Kill A Top Iranian Military Leader?

Was It Legal For The U.S. To Kill A Top Iranian Military Leader? 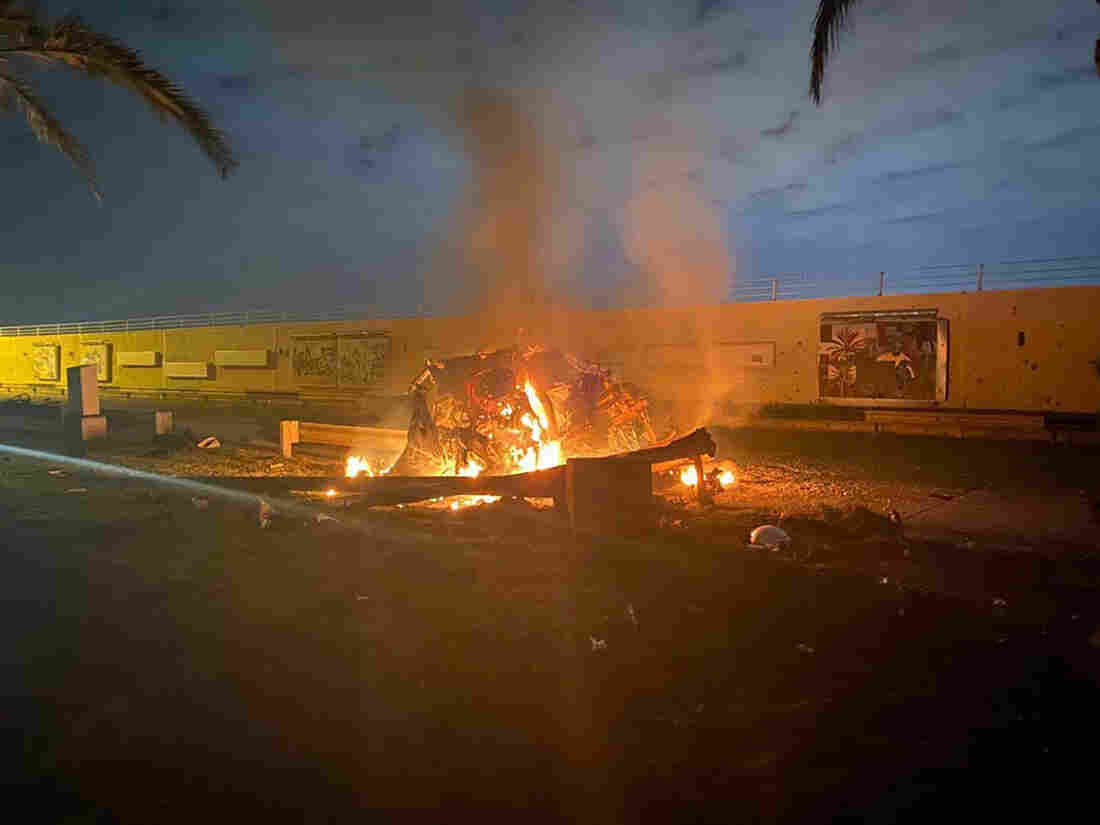 A vehicle hit by a missile burns outside the Baghdad International Airport, where U.S. airstrikes killed Qassem Soleimani, the head of Iran's elite Quds Force, at the direction of President Trump. AP hide caption 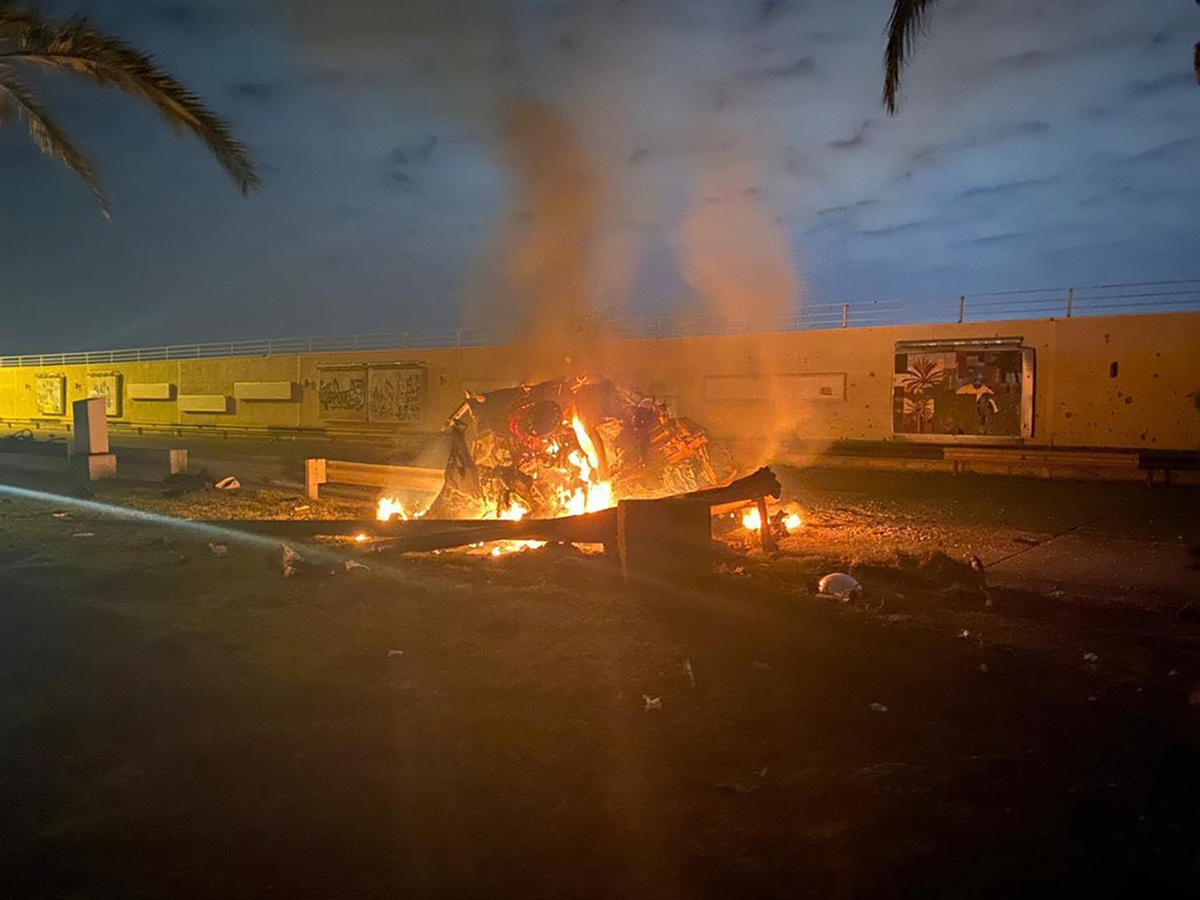 A vehicle hit by a missile burns outside the Baghdad International Airport, where U.S. airstrikes killed Qassem Soleimani, the head of Iran's elite Quds Force, at the direction of President Trump.

The U.S. killing of a top Iranian military leader, Qassem Soleimani, in an airstrike in Baghdad this week has raised thorny legal questions. Experts disagree over whether the U.S. had the legal authority to launch the deadly strike.

President Trump stated that Soleimani was plotting "imminent and sinister attacks on American diplomats and American personnel, but we caught him in the act and terminated him."

The powerful Iranian commander led a shadowy elite military organization called the Quds Force. In recent months, the U.S. says the group has backed an Iraqi militia that has launched numerous attacks on U.S. personnel, including Tuesday's attempt to storm the U.S. Embassy in Baghdad.

Experts disagree on how to characterize this killing. "I think the best definition would be either one of assassination or murder," Gary Solis, a retired Marine who taught on the laws of war at West Point, tells NPR. He says what happened is comparable to Iran killing a high-ranking U.S. military official with a bomb on U.S. soil.

Assassination is prohibited by a U.S. executive order, says Ashley Deeks, a University of Virginia law professor who focuses on the laws of war.

She thinks it is unlikely this meets the definition of an assassination: "A lawful killing during an armed conflict does not constitute an assassination," Deeks says. "As a legal matter, if he were intimately involved in planning and blessing these attacks, then that doesn't seem to render it as assassination."

A State Department official agrees. He was asked by NPR's Michele Kelemen whether this constituted an assassination.

"Assassinations are not allowed in the law," the official said, and offered two criteria that authorities weighed. "Do you have overwhelming evidence that somebody is going to launch a military or terrorist attack against you?" the State Department official said. "Check that box."

The official added that the administration also explored whether there was another way to stop Soleimani, such as having him arrested, and determined there was "no way."

Was killing Soleimani legal under U.S. domestic law? "It's clearly lawful," says John Bellinger, a fellow at the Council on Foreign Relations and former legal adviser to the Department of State under the George W. Bush administration. "It's clearly an exercise of the president's constitutional authority as commander in chief and chief executive to use force in the national interest."

The answer is less straightforward for Scott Anderson, a fellow at the Brookings Institution who served as the legal adviser for the U.S. Embassy in Baghdad during the Obama administration. He notes that in the U.S., "the legal views as to what is permitted by the law in terms of the use of military force really is pretty well-defined by the executive branch itself."

That's because Congress has not imposed substantive limits on the executive's use of force and federal courts have appeared reluctant to intervene, he says.

In recent years, some members of Congress have occasionally criticized the fact that complicated wars grinding on in the Middle East have been justified by legislation passed nearly two decades ago.

U.S. officials did not state a specific legal basis for the strike until Friday evening, when Trump's national security adviser, Robert O'Brien, cited the 2002 Authorization for Use of Military Force, which ushered in the war against Saddam Hussein's regime in Iraq. O'Brien also said that the authorization was consistent with the president's constitutional authorities as commander in chief to defend the nation and forces against attacks.

O'Brien did not elaborate on the nature of the threat. The strike against Soleimani was carried out without officially notifying Congress ahead of time.

Anderson says that the Trump administration's legal justifications are "adopting a stance that pushes a little beyond what it and prior presidential administrations ... have done in the past."

He says it's hard to argue that the action against Soleimani is completely unlawful under U.S. law – but said that justifications may rely on interpretations of law that are controversial or antiquated.

Jack Goldsmith, a professor at Harvard Law School, notes that presidential war powers have been steadily expanding for years – and that Congress has largely gone along with it. "Our country has, quite self-consciously, given one person, the President, an enormous sprawling military and enormous discretion to use it in ways that can easily lead to a massive war," he said on Twitter. "That is our system: one person decides."

The legality of this killing under international law, rather than domestic, appears harder to assess. Bellinger says that hinges on the nature of the threat that Soleimani posed. "The administration needs to put out more facts as to why they believe that Soleimani presented an imminent threat to the United States and U.S. forces," he says.

Deeks says the U.S. appears to be arguing that the strike was an act of anticipatory self-defense.

Agnes Callamard, the U.N. special rapporteur on extrajudicial executions, questions whether this strike would meet the standard needed to justify its legality on those grounds. "The test for so-called anticipatory self-defense is very narrow: It must be a necessity that is 'instant, overwhelming, and leaving no choice of means, and no moment of deliberation'. This test is unlikely to be met in these particular cases," she tweeted.

"I hope the U.S. has rock-solid, written evidence of a continuing or an ongoing or a planned attack on the United States or its interests," says Solis. "You've got to have more than an assertion that plans were underway."

Another complicated legal aspect of this attack is the fact that it occurred within Iraq.

"Generally speaking, international law says that states are not supposed to use military force on each other's territories without the consent of the host state," Anderson notes, though he says that the U.S. has argued previously that when a host government is unable or unwilling to address a threat, the state affected by the threat can take action without the host's consent. That's a controversial argument, he says.

Iraqi leaders are responding angrily at the attack, which also killed an Iraqi official. "The assassination of an Iraqi military commander who holds an official position is considered aggression on Iraq ... and the liquidation of leading Iraqi figures or those from a brotherly country on Iraqi soil is a massive breach of sovereignty," Iraqi Prime Minister Adel Abdul-Mahdi said, as NPR reported.