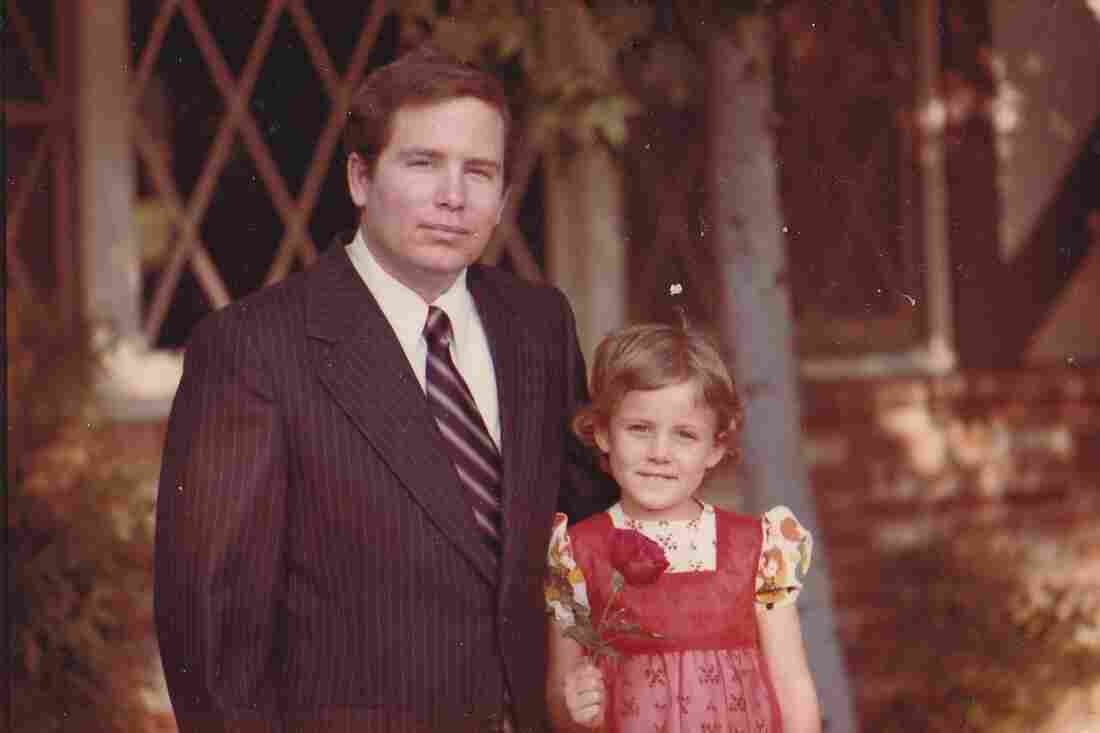 Stephanie Hofeller stands with her father, Thomas, for a family photo in California during the 1970s. Republicans fought to stop computer files found on the redistricting expert's hard drives from going public — now Stephanie is sharing them online. Courtesy of Stephanie Hofeller hide caption 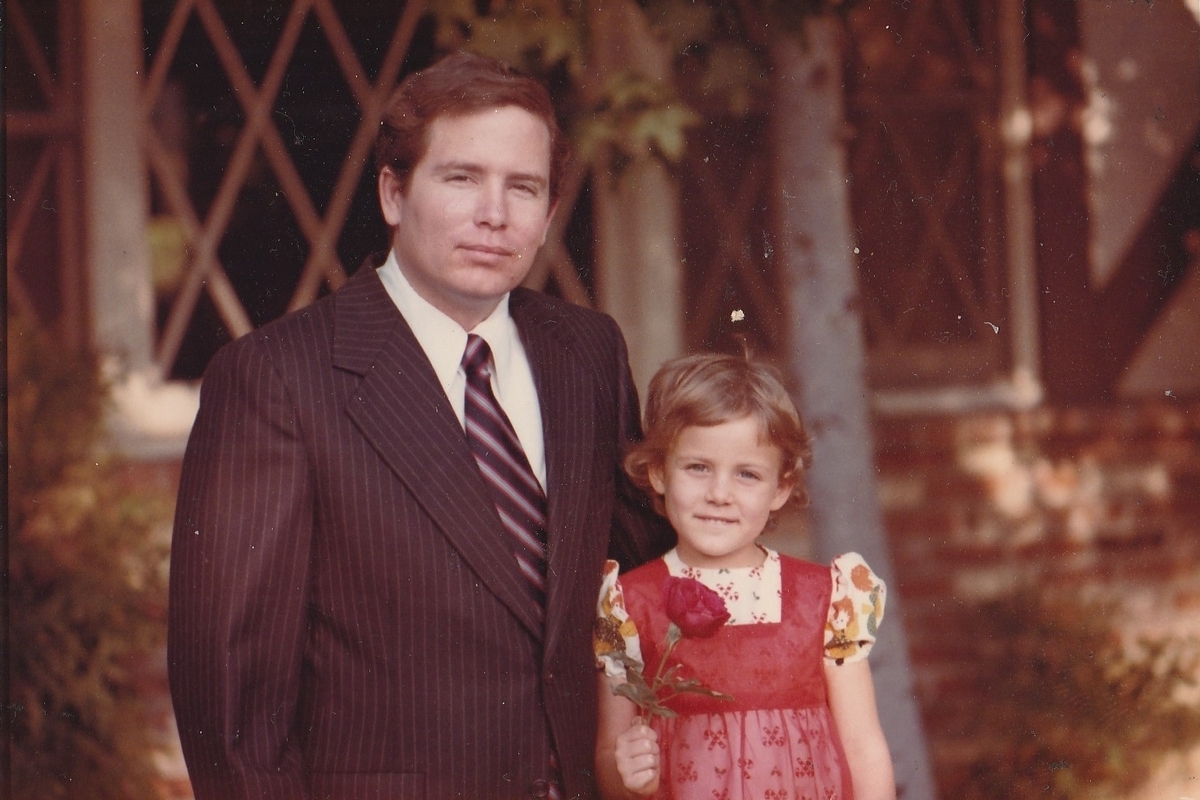 Stephanie Hofeller stands with her father, Thomas, for a family photo in California during the 1970s. Republicans fought to stop computer files found on the redistricting expert's hard drives from going public — now Stephanie is sharing them online.

More than a year after his death, a cache of computer files saved on the hard drives of Thomas Hofeller, a prominent Republican redistricting strategist, is becoming public.

Republican state lawmakers in North Carolina fought in court to keep copies of these maps, spreadsheets and other documents from entering the public record. But some files have already come to light in recent months through court filings and news reports.

They have been cited as evidence of gerrymandering that got political maps thrown out in North Carolina, and they have raised questions about Hofeller's role in the Trump administration's failed push for a census citizenship question.

Now more of the files are available online through a website called The Hofeller Files, where Hofeller's daughter, Stephanie Hofeller, published a link to her copy of the files on Sunday after first announcing her plans in a tweet last month.

"A hunch that maybe something was wrong"

Her decision to put the files online herself is just the latest twist in a series of one astonishing event after another.

It had been more than four years since Stephanie had spoken to her father after a family dispute involving the custody of her children landed in court. But on the last day of September in 2018, she "had a hunch that maybe something was wrong," according to her testimony for a lawsuit deposition. 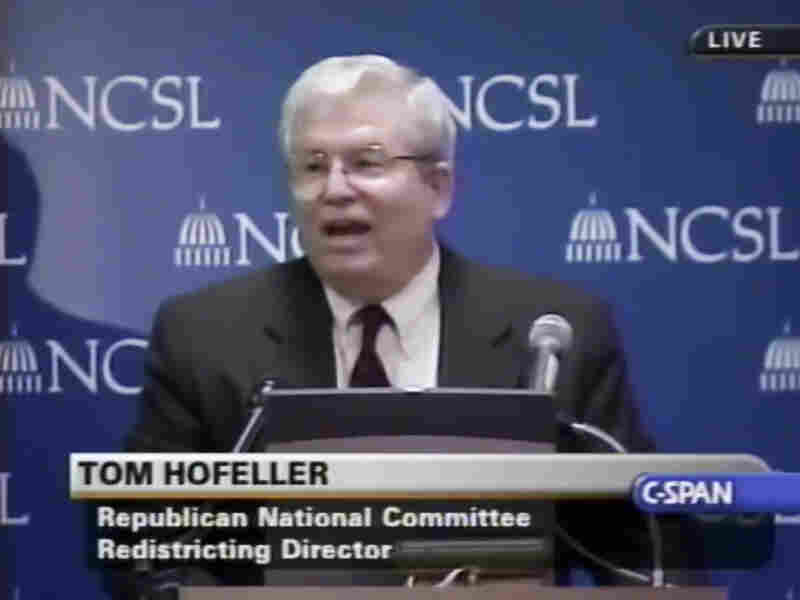 After his death in 2018, Thomas Hofeller's daughter found hard drives filled with the GOP redistricting strategist's files. Among them was a study in which he concluded that adding a citizenship question to census forms would be "advantageous to Republicans and Non-Hispanic Whites." C-SPAN via AP hide caption 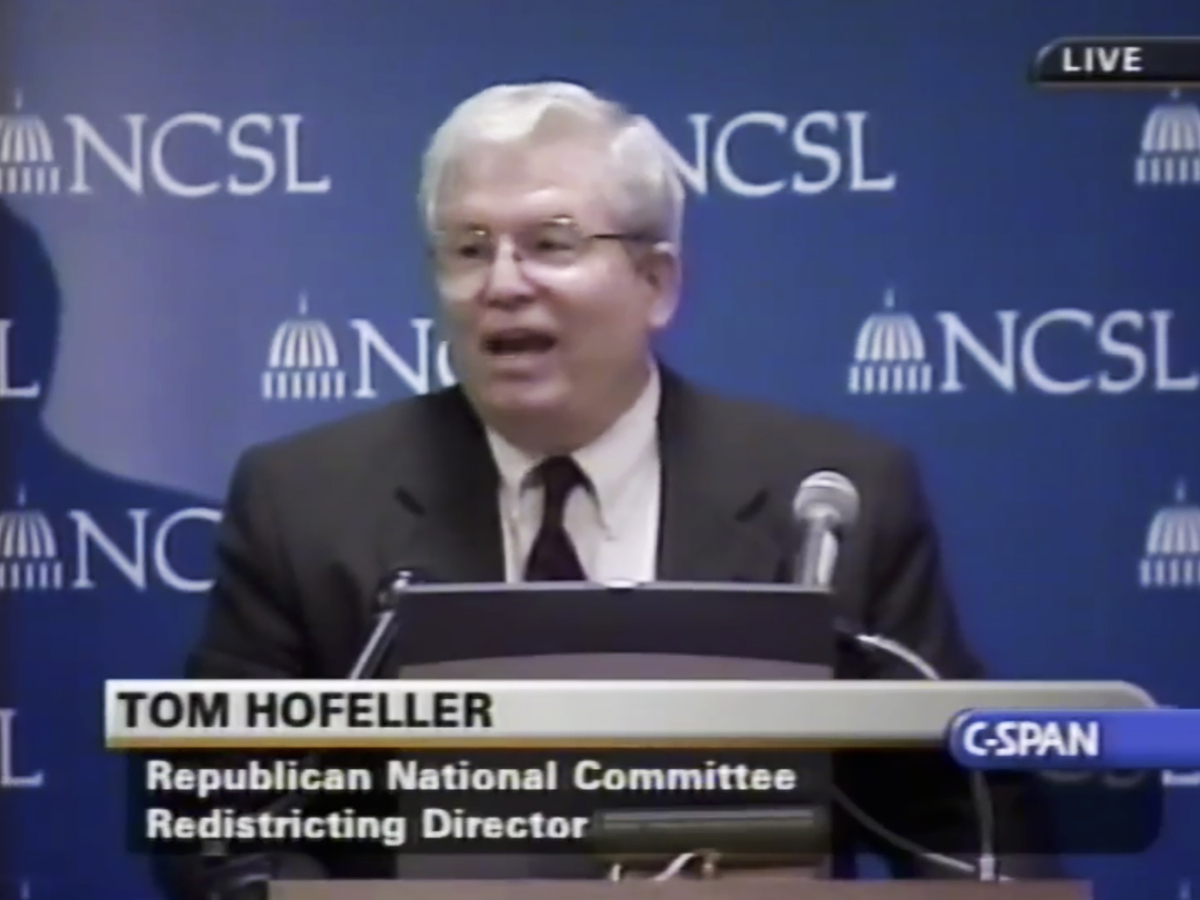 After his death in 2018, Thomas Hofeller's daughter found hard drives filled with the GOP redistricting strategist's files. Among them was a study in which he concluded that adding a citizenship question to census forms would be "advantageous to Republicans and Non-Hispanic Whites."

Sitting in her car parked outside a convenience store in Kentucky, she used her phone to search online for her father's name and found an obituary for Thomas Hofeller, confirming that he had died at the age of 75 more than a month earlier in August.

Stephanie then reconnected with her mother, Kathleen, and visited her parents' apartment in North Carolina, where she found four external hard drives and a clear plastic bag containing 18 USB thumb drives in her father's room. Stephanie says her mother encouraged her to take the devices.

A treasure trove that led to bombshells

It turned out they were filled with photos of Stephanie with her children and other personal items — as well as files from her father's work as a redistricting consultant for Republicans.

While looking for an attorney to represent her mother in 2018, Stephanie says she connected with the North Carolina chapter of Common Cause, an advocacy group that had brought a lawsuit against Republican state officials to overturn political maps Thomas Hofeller helped draw. After mentioning the hard drives to Common Cause, Stephanie received a court order to turn them over as potential evidence for the lawsuit. She did so in March after making a copy of some of the files for herself.

Since then, the Hofeller files have led to bombshell developments in two major legal battles in the political world.

In September, Common Cause won its legal challenge to political maps in North Carolina, where a state court cited some of the files as evidence of gerrymandering designed to unfairly give Republicans an advantage in winning elections and maintaining control of the state legislature.

"The Court finds that in many election environments, it is the carefully crafted maps, and not the will of the voters, that dictate the election outcomes in a significant number of legislative districts and, ultimately, the majority control of the General Assembly," a three-judge panel of the Wake County Superior Court wrote in their ruling.

Other files have become intertwined in the federal lawsuits over the Trump administration's push to add the now-blocked citizenship question to the 2020 census, raising questions about Thomas Hofeller's role and the administration's true motives.

Lawyers with the law firm Arnold & Porter — which represented both Common Cause and some of the citizenship question's challengers — uncovered an unpublished study in which Thomas Hofeller concluded using responses from such a question would be "advantageous to Republicans and Non-Hispanic Whites" when voting districts are redrawn. The revelation came weeks before the U.S. Supreme Court issued its ruling in June, affirming a lower court's decision against the question, which has been permanently blocked from forms for the upcoming national head count.

Saving "trade secrets" from being "destroyed"

Stephanie says she decided to turn the hard drives over for the North Carolina lawsuit in March and to upload her copy of the files online this week in part to preserve a historical record about her father.

"His work is really having a profound effect and has had long before anybody really noticed on a broader level," Stephanie says. "I think from the historical standpoint, this slice of life, this little snapshot is going to prove very valuable."

Attorneys for Thomas Hofeller's former company, Geographic Strategies, have been trying to keep sealed copies of certain files that were turned over for the North Carolina case, citing them as "trade secrets," and other proprietary information about the company's work. While that dispute has played out in a state court in recent months, news organizations including The New Yorker, The New York Times and The Intercept have published reports based on copies they obtained of Hofeller's files.

"I originally started sharing them with journalists as a direct response to the assertion by the legislative defendants through counsel that they should be destroyed," Stephanie tells NPR, which previously received a copy of the files from her.

The files document the wide reach of Thomas Hofeller's work on political maps across the country — including in Arizona, Florida, Maryland, Mississippi, Missouri, Ohio, Tennessee and Virginia, as well as New York's Nassau County and Texas' Galveston and Nueces counties.

In a Microsoft Word document last saved in 2015, Thomas Hofeller warned against changing the Census Bureau's policy of including prisoners in the population counts of the areas where they're incarcerated, expressing concern that "the actual effect on reapportionment and redistricting is not clearly known for individual states."

As a longtime strategist for the Republican National Committee, Thomas Hofeller was known for his warnings to keep redistricting work under wraps.

"Treat every statement and document as if it was going to appear on the FRONT PAGE of your local newspaper," one of his slides for a 2011 training session for redistricting officials says. "Emails are the tool of the devil."

Stephanie says the irony that some of his work files are now out in public is not lost on her.

"I don't think he cared all that much to protect these people after he was gone," she adds.

While he was alive, politics governed family life for the Hofellers, Stephanie says. Growing up, she remembers her father correcting how she and others would pronounce gerrymandering with a soft G sound.

Her father preferred the hard G (as in Gary) in honor of the term's namesake — former U.S. Vice President Elbridge Gerry, who as governor of Massachusetts in 1812 signed into law a political map with a salamander-shaped district that gave the Democratic-Republican party an advantage over the Federalists.

Stephanie says her father's stated goal was to use gerrymandering to "create a system wherein the Republican nominee would win."

Contrary to some people's assumptions given her role in revealing her father's work to perpetuate Republican power, Stephanie says she does not identify as a Democrat, although she has voted for Democratic candidates in the past.

"The reason I don't identify as a Democrat is because I'm an anarchist," she says. "I don't believe that we're going to really find solutions to the deeper problems of inequality in a system that demands a hierarchy, which is, by definition, unequal."

"All the good stuff"

During her deposition in May, she testified there may be more files from her father's work to uncover. Before Stephanie arrived at her parents' apartment, her father's business partner, Dale Oldham, had removed a laptop and a desktop computer with Hofeller's work files, Stephanie said her mother told her.

"Dale got all the good stuff," Stephanie told attorneys.

Oldham has not responded to NPR's requests for comment.

As part of proceedings for the North Carolina case, Oldham has argued in court filings that when Thomas Hofeller died, "Geographic Strategies' computer, various files, and numerous backups in Dr. Hofeller's possession" belonged to the company — of whom Oldham is the sole surviving member — and its clients.

In November, one of those clients, the Republican National Committee, paid Oldham more than $420,000 for "legal and compliance services" — part of a total of more than $658,000 Oldham has collected from the RNC since May, according to Federal Election Commission filings.

Common Cause's attorneys have been unable to get Oldham to share any additional documents. But as part of sanctions proceedings related to the citizenship question lawsuits in New York, plaintiffs' attorneys have asked U.S. District Judge Jesse Furman to allow them to subpoena Oldham, who in 2017 consulted through Hofeller with a then-adviser to the Trump administration on the question, according to an email obtained by the House Oversight and Reform Committee.

For her part, Stephanie says she's committed to transparency with the public in case she gets access to any more of her father's files.

"If I were to find something," she says, "I would most certainly share it."