Accessibility links
California Cities Hire Goats To Help Prevent Wildfires Cities across California are clearing out brush and invasive grasses on hillsides to help keep wildfires from spreading. But in some towns, in addition to hired hands, they're also using goats. 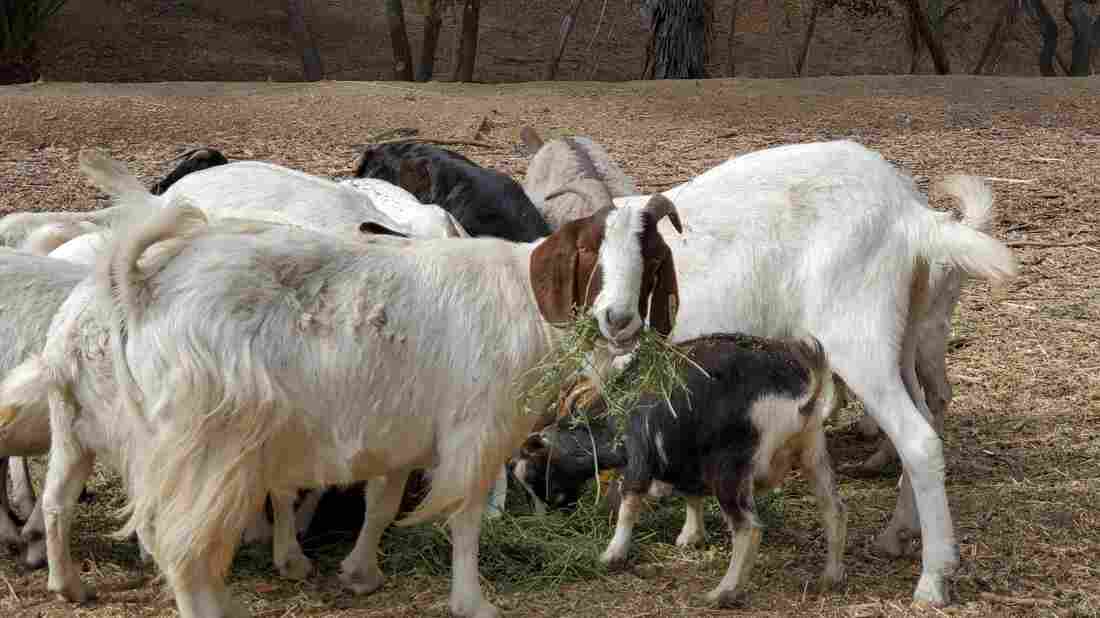 A herd of goats spent the fall in and around Deer Canyon Park in Anaheim, Calif., helping to keep grasses and other potential wildfire fuels in check. Megan Manata hide caption 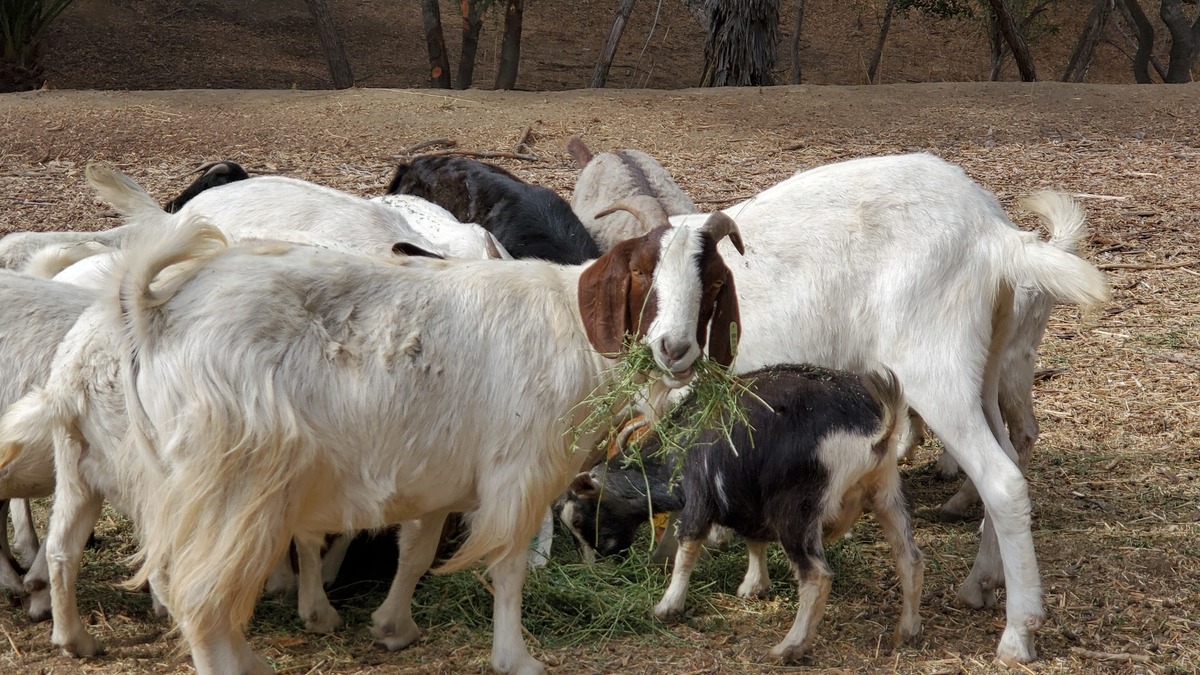 A herd of goats spent the fall in and around Deer Canyon Park in Anaheim, Calif., helping to keep grasses and other potential wildfire fuels in check.

California has gone through several difficult fire seasons in recent years. Now, some cities are investing in unconventional fire prevention methods, including goats.

The goats are stationed in places like Deer Canyon Park, a nature preserve with more than a hundred acres of steep hills. Beginning in July, roughly 400 goats worked through the park, eating invasive grasses and dried brush.

The company's operations manager Johnny Gonzales says that Deer Canyon, with its peaks and valleys, is just the right kind of place to use goats for fire prevention.

"This is the topography that poses challenges during these wildfire events," Gonzales says. "And we can go ahead and reduce the fuel loads and take out the invasive plants, and establish the native plants on these banks; you're reestablishing the ecology."

Gonzales says that demand for wildfire prevention goats has soared in recent years.

"It's not an underestimation to say that we got over 100 calls a month from private individuals with smaller parcels, little lots or things from an acre, 2 acres requesting the goats," Gonzales says. "And unfortunately, as a commercial herd, I can't take on all these private lots."

Anaheim's Fire Marshall Allen Hogue says the steepness of the hills in parts of the city makes the goats invaluable for landscape management.

"It would be almost impossible for a human to sit there or walk up and down with a weed whacker or a Weed Eater, so that's why we use the goats," Hogue says.

What makes the goats important isn't just their ability to climb steep hillsides. According to Hogue and Gonzales, the animals eat invasive plants and grasses while only minimally grazing on native plants. 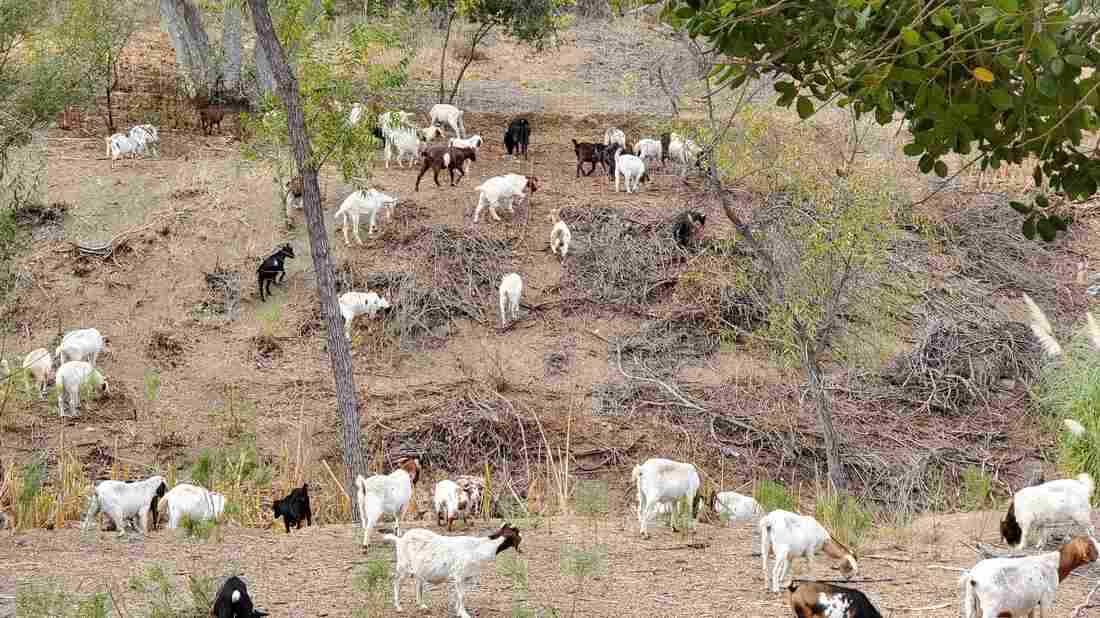 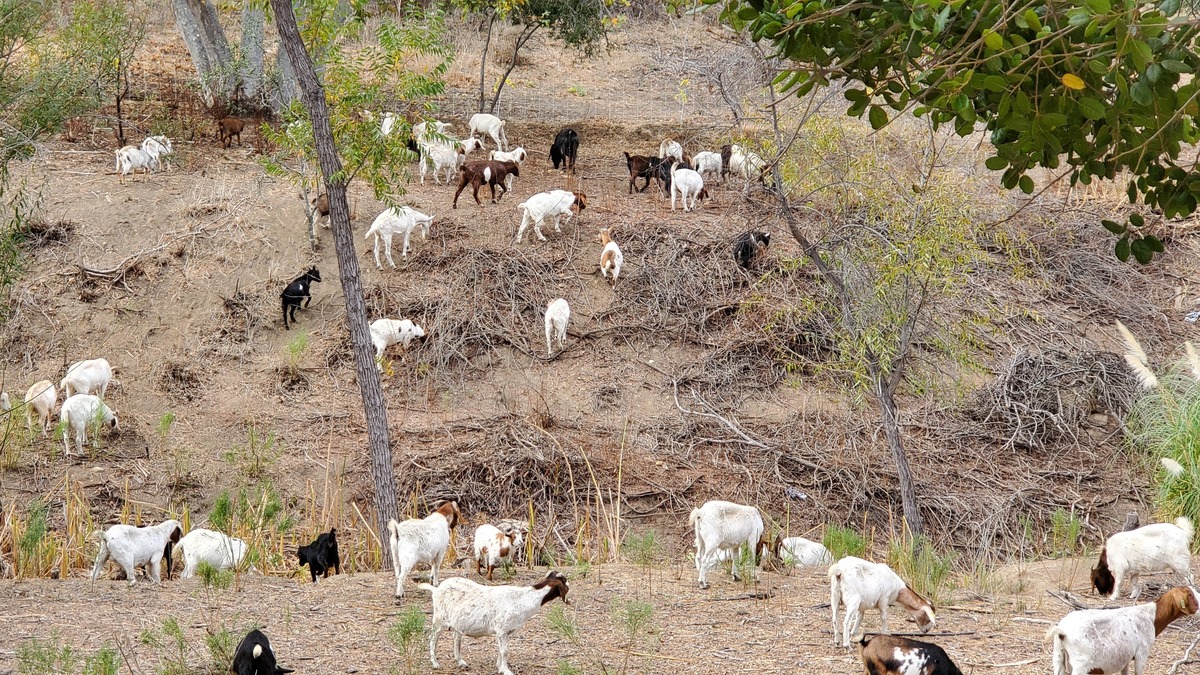 Goats are able to better navigate and clear brush from steep hills, where humans walking with weed wackers or riding on lawn mowers can't easily go.

A recent study from the University of Massachusetts Amherst found that these alien grasses are increasing the frequency of wildfires because of how easily they burn.

The study found that these alien grasses double or triple the likelihood of a fire occurring if they're present.

While this particular study didn't measure the change in invasive plant abundance, researchers have found that climate change has made it easier for these plants to spread. These flammable grasses outgrow native plants that are naturally more fire-resistant, which adds potential fuel to fires.

"So this is one of the biggest challenges with invasive species," Bradley says. "Like any home gardener knows that you can't just go out and weed once, declare victory and leave, right?"

This is where goats can play a role, according to Bradley.

"Goats are really good at eating stuff, right? The challenge with them though, is that you can't just do it once. They need to go back time and time again in order to keep controlling that biomass," she says.

However, not all researchers are convinced. Some like Jon Keeley from the U.S. Geological Survey think that using goats alone as fire prevention isn't enough.

"One of the things that concerns some people is there is this feeling oftentimes that if you're using goats to graze these invasive grasses, you're somehow making the environment safer for communities and for homes," Keeley says. "And that's debatable."

He says that goats will eat grasses and keep the invasive plants down, but he says that the goats don't go everywhere they're needed.

"The problem is those grasses are going to spread far beyond areas where you would graze the goats," Keeley says. "These grasses are all over the Santa Monica Mountains, and so you're not likely to impact very many areas by goat grazing."

Keeley says that grazing also isn't enough since homes are most commonly lit aflame because of burning embers. Clearing out grasses around a house is useful, but "those embers are going to be blown over these areas that were grazed the goats," he says.

Keeley says wildfires are a people problem. As the state continues to grow in population and the cost of housing rises dramatically, residents are pushed to live in unsafe areas.

"We've been forced to move out into landscapes that are very hazardous, and this almost certainly accounts for why these fires have become more destructive in the last couple of decades," Keeley says. "And the problem is not likely to go away."

While California continues to combat wildfires, the city of Anaheim says the goats are a key part of its fire prevention plans, but they're just one piece of a large puzzle. The city also uses heat-sensing satellite imagery and wildfire detection cameras.

Gonzales, who hires out his goats, says that when the goats spend so much time in an area, they become part of the community and sometimes even get their own names.

Megan Manata is an intern on NPR's National Desk.