Accessibility links
In A Day Of Turmoil, Repercussions Of Soleimani Killing Grow More Widespread Within a matter of hours, Iraq moved to expel U.S. forces; the U.S. said it would pause the fight against ISIS in Iraq; and Iran signaled it will stop abiding by limits of the 2015 nuclear deal. 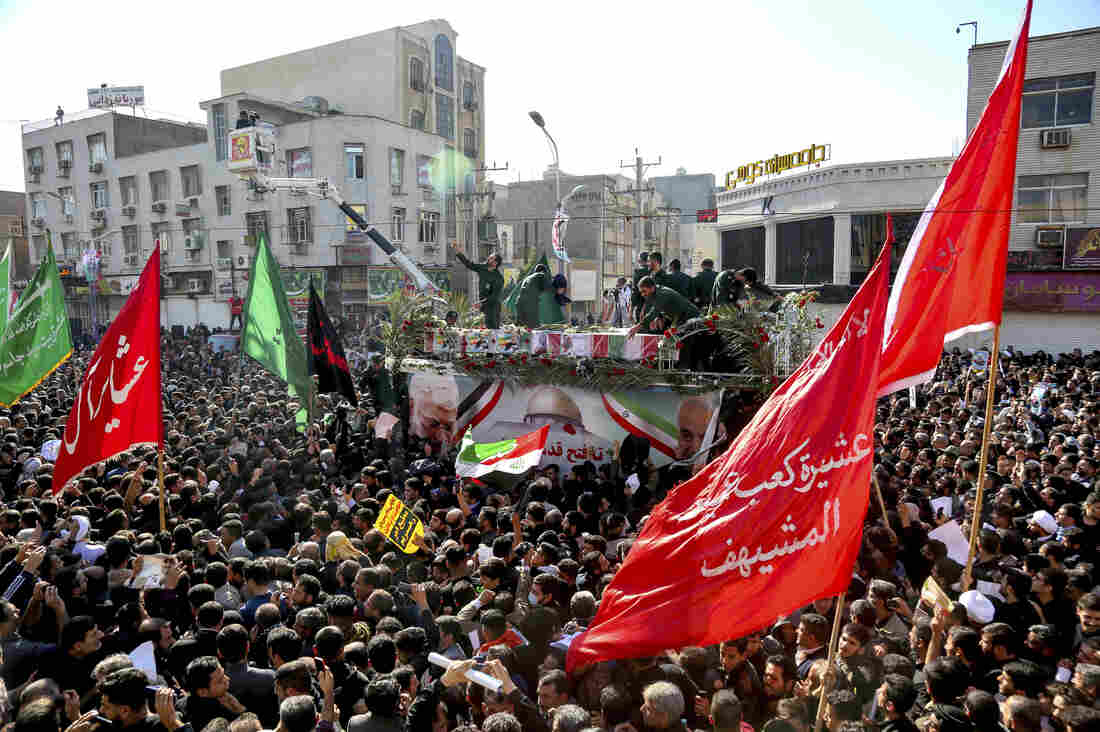 In this photo provided by the Iranian Students' News Agency, flag-draped coffins of Gen. Qassem Soleimani and others who were killed in Iraq in a U.S. drone strike are carried on a truck surrounded by mourners in the Iranian city of Ahvaz on Sunday. Alireza Mohammadi/AP hide caption 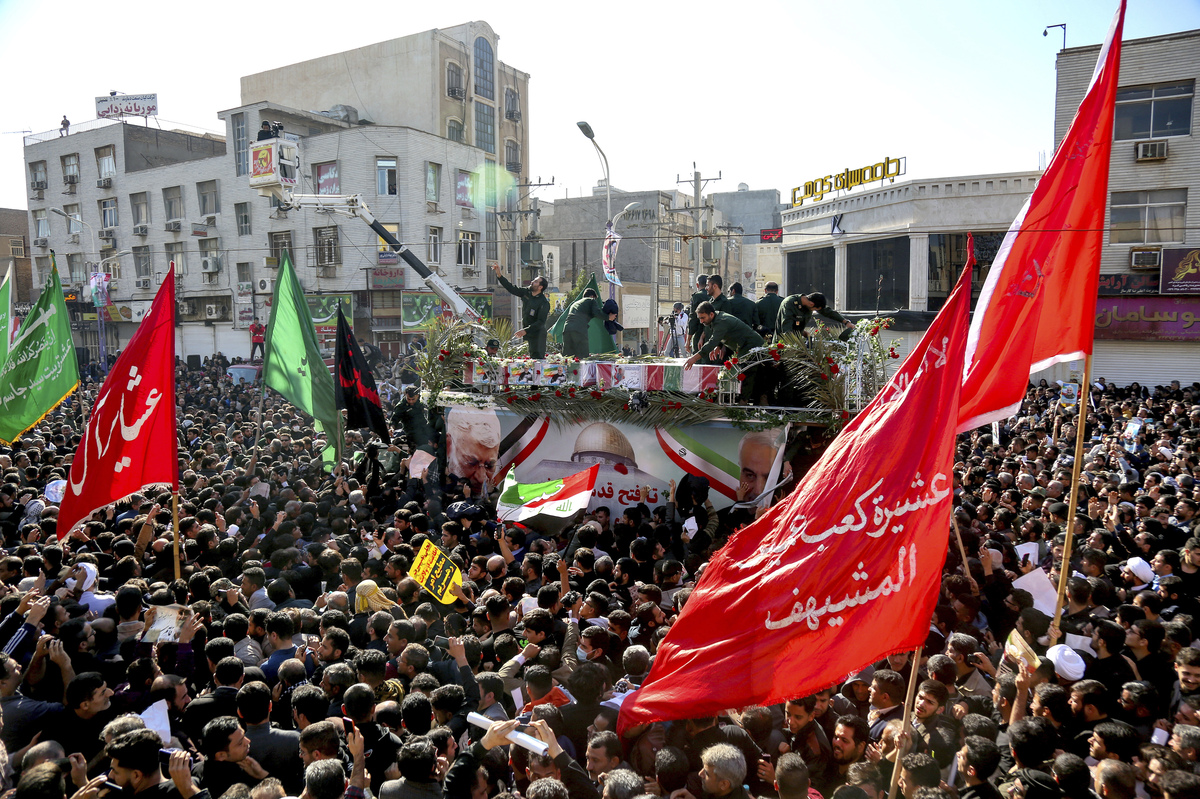 In this photo provided by the Iranian Students' News Agency, flag-draped coffins of Gen. Qassem Soleimani and others who were killed in Iraq in a U.S. drone strike are carried on a truck surrounded by mourners in the Iranian city of Ahvaz on Sunday.

As thousands of mourners flooded the streets of Iran on Sunday to mourn the death of Gen. Qassem Soleimani, a series of dizzying developments convulsed the Middle East, generating new uncertainty around everything from the future of U.S. forces in Iraq to the battle against ISIS and the effort to quell Tehran's nuclear ambitions.

Amid the fallout of the U.S. drone strike on Friday that killed Soleimani, Sunday saw the following whiplash-inducing developments unfold almost simultaneously:

Here's a breakdown of Sunday's tangle of Middle East events.

Iraq's parliament, meeting for an emergency session, voted on Sunday to expel the thousands of U.S. troops stationed in the country — the latest response to the strike that killed the Soleimani.

The vote still needs the approval of the Iraqi government, which has permitted a U.S. presence in the country to help combat the Islamic State.

Iraqi Prime Minister Adil Abdul-Mahdi told parliament that Iraq was grateful for the assistance the U.S. has provided in fighting ISIS, but he is now recommending that the 5,200 U.S. troops stationed there permanently leave the country.

Trump said if the U.S. were forced to leave Iraq, it would not be on "friendly" terms. Speaking aboard Air Force One, he said: "If they do ask us to leave, if we don't do it in a very friendly basis, we will charge them sanctions like they've never seen before ever. It'll make Iranian sanctions look somewhat tame."

Earlier, Abdul-Mahdi said Trump called him to ask for help in mediating with Iran after the U.S. Embassy in Baghdad was attacked.

Soon after, the U.S. launched the drone strike that killed Soleimani and that also claimed the life of Iranian-backed Iraqi militia leader Abu Mahdi al-Muhandis.

Sunni and Kurdish members of parliament boycotted the session, but Shiite parties, many of them Iranian backed, had enough votes to pass the resolution.

The parliament vote on Sunday is nonbinding. The current outgoing government could try to delay the move, but it would be difficult to reject the proposal outright.

Abdul-Mahdi, who resigned in November, has assumed a caretaker role until parliament approves a successor. That could leave the final say on the future of U.S. forces in Iraq to his eventual replacement.

A spokeswoman for the State Department said the U.S. is disappointed by Sunday's vote.

"While we await further clarification on the legal nature and impact of today's resolution, we strongly urge Iraqi leaders to reconsider the importance of the ongoing economic and security relationship between the two countries and the continued presence of the Global Coalition to Defeat ISIS," said State Department spokeswoman Morgan Ortagus.

"We believe it is in the shared interests of the United States and Iraq to continue fighting ISIS together. This administration remains committed to a sovereign, stable, and prosperous Iraq," Ortagus said.

This past week, a senior State Department official said the U.S. was working with allies on the ground in Iraq to prevent the vote from happening — efforts that appear to have failed.

Talking to reporters on background, the official said Iraqis want the U.S. presence in their country.

"Now, there are Iranian proxies who do not want us there, and they are threatening to kill or attack, intimidate those of the Iraqis who want us there to fight ISIS, to help build their military, to stabilize their financial system," the official said.

A halt to the ISIS fight

The remaining U.S. forces in Iraq are part of an international coalition that arrived after about a third of the country became overrun by the Islamic State. Since then, Iraq has claimed victory over the jihadis, but the U.S.-led coalition has remained to prevent an ISIS resurgence.

On Sunday, however, Defense Department officials said that because of attacks on Iraqi and U.S. bases over the last two months, the U.S. would be suspending support for Iraq's anti-ISIS operations and training of Iraqi forces.

"This has limited our capacity to conduct training with partners and to support their operations," military officials said of the repeated attacks on U.S. outposts. "We have therefore paused these activities."

Resources are instead being reallocated to shore up the security of U.S. facilities and troops.

"We remain resolute as partners of the Government of Iraq and the Iraqi people that have welcomed us into their country to help defeat ISIS. We remain ready to return our full attention and efforts back to our shared goal of ensuring the lasting defeat" of the Islamic State, military officials said. 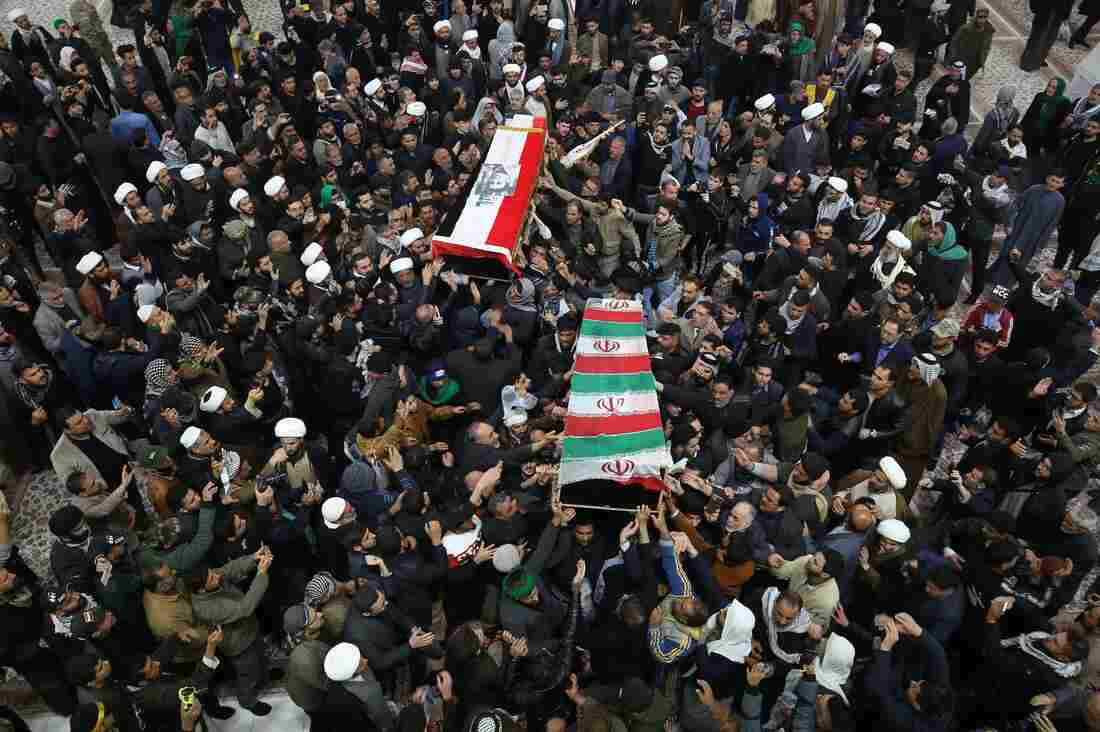 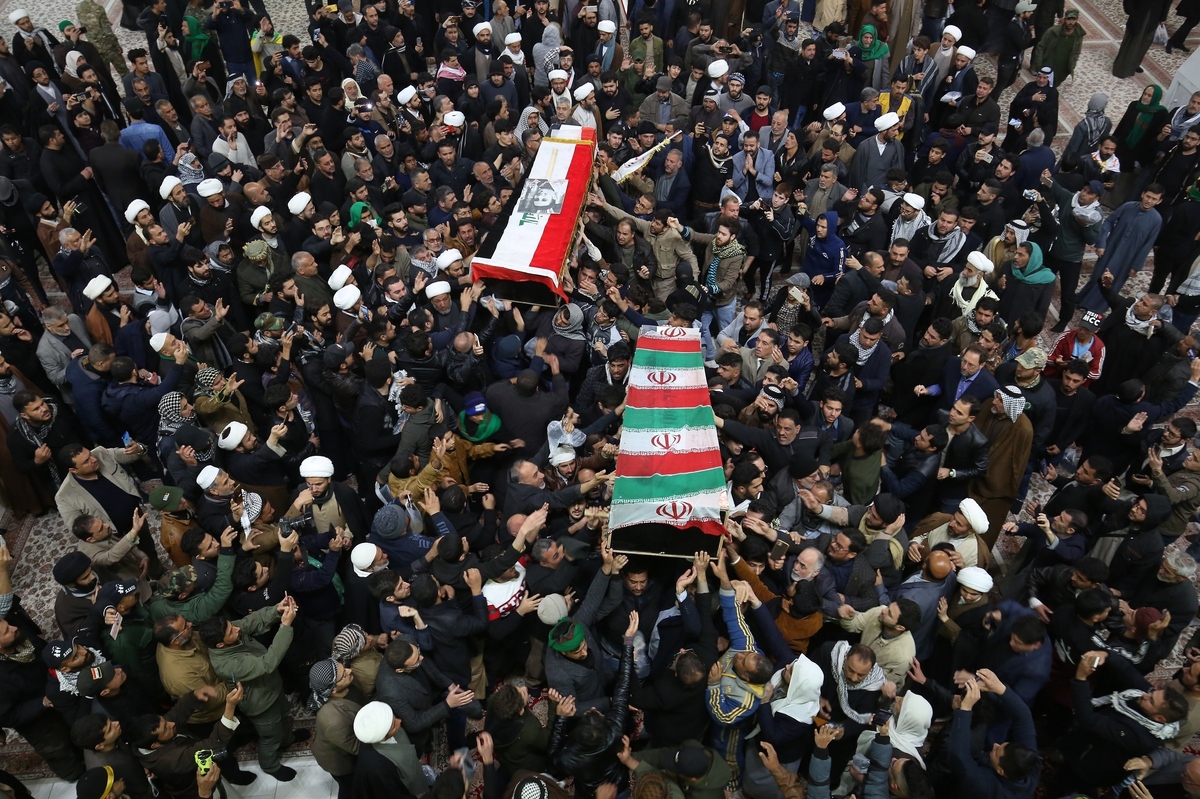 Iran's state television reported Sunday that the country will no longer abide by uranium enrichment restrictions imposed by the 2015 nuclear deal, potentially freeing open its ambitions to develop a nuclear weapon.

The Iranian government indicated that if the U.S. eased economic sanctions against the country, it would return to abiding by the terms of the agreement.

In May 2018, Trump announced that the U.S. was pulling out of the multi-country deal aimed at restricting Iran's nuclear program. "It is clear to me that we cannot prevent an Iranian nuclear bomb under the decaying and rotten structure of the current agreement," Trump said at the time.

Despite the U.S. abandoning the deal, other participants worked to preserve the agreement, which was the culmination of complex negotiations among the United States, France, Germany, the United Kingdom, China and Russia.

The announcement that Iran was intent on rolling back its commitments to the accord presented myriad unanswered questions, including whether inspectors would be forced to leave the country and what will be done with the infrastructure currently in place to curb the country's enrichment.

Sunday's developments in Iraq came as hundreds of thousands of people filled the streets of Iran in an emotional outpouring of respect for Soleimani, whose remains arrived in a casket to the Islamic Republic as part of nationwide mourning for the man widely considered the second-most powerful figure in the country after the supreme leader, Ayatollah Ali Khamenei.

As the casket was driven slowly in the western city of Ahvaz, the enormous grief-stricken crowds chanted and waved banners bearing the face of Soleimani, a powerful military leader who until his death led Iran's elite Quds Force.

Hundreds of thousands of people in the Northeastern city of Mashhad hold funeral procession of assassinated martyrs Hajj Qassem Soleimani and Abu Mahdi Al-Muhandis. Their bodies were transferred from Ahvaz and the funeral will continue in Tehran. pic.twitter.com/1Vamu0fDOy

Soleimani was killed in a U.S. drone strike on Friday, ratcheting up tensions between Tehran and Washington and prompting vows of retaliation from top Iranian leaders.

In Iran's parliament, lawmakers chanted "Death to America!" in unison — a development that followed Trump's warning that the U.S. would target 52 "high level & important" Iranian sites in the event that Iran retaliates.

Iranian MPs unanimously chanted "death to America" in the chamber to protest against Soleimani's assassination by the US.

In response, Iran's foreign minister, Mohammad Javad Zarif, said targeting Iranian cultural sites would be a war crime. "Whether kicking or screaming, [the] end of US malign presence in West Asia has begun," Zarif tweeted.

Returning to Washington, D.C., from Florida on Sunday evening, Trump reiterated his promise to target cultural sites, adding that there would be "major retaliation" in the case of an attack by Iran against the U.S.

In an interview with NPR on Sunday, retired Gen. David Petraeus, the architect of the U.S. surge in Iraq, said, "It is impossible to overstate the importance" of the U.S. killing Soleimani. He added that the major question now is how Iran will retaliate — likely, he said, through the country's proxy forces.

"Iran is not in the strongest of positions, given the sanctions, dismal economy and widespread Iranian popular unrest," Petraeus said. "I tend to think it is more likely that we will see a variety of proxy attacks," he said. "And Iran has a lot of proxies throughout the region, thanks to the efforts of Qassem Soleimani."

Petraeus added: "There's no question that the tensions have been dramatically increased as a result of this action. ... This is clearly heading in a very bad direction. Make no mistake about it: There will be losses on all sides if this escalates further."