Accessibility links
'The System's Broken' And 'Joker' Director Aimed To Explore That On Screen Todd Phillips explores mental health and the lack of social services in his Batman villain origin story (of sorts). "The system's broken, and why not use a film to make a comment on that?" he says. 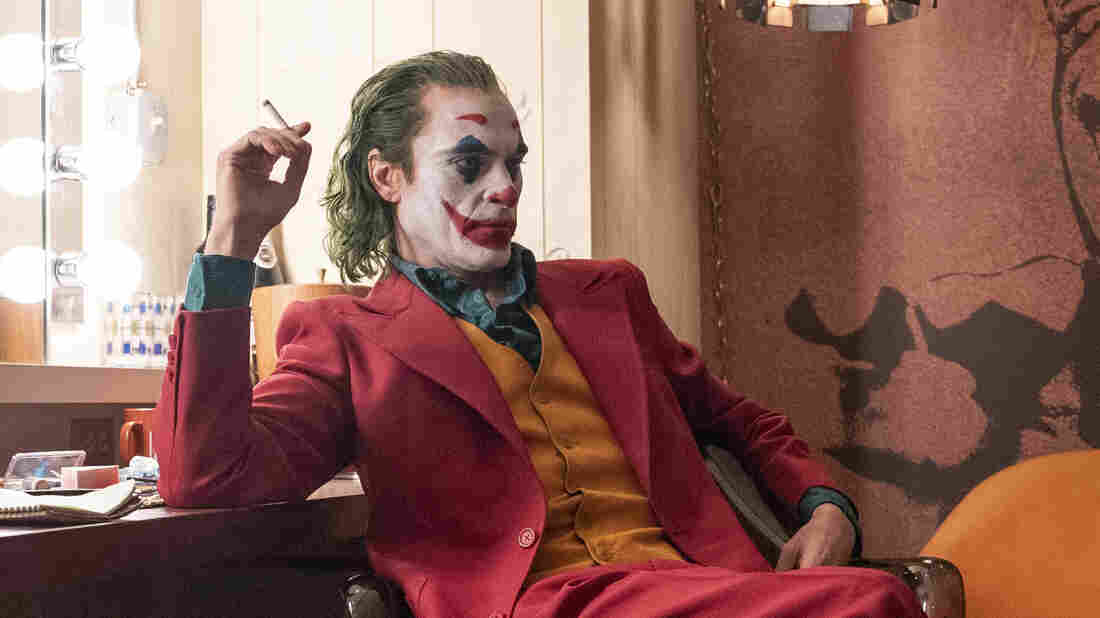 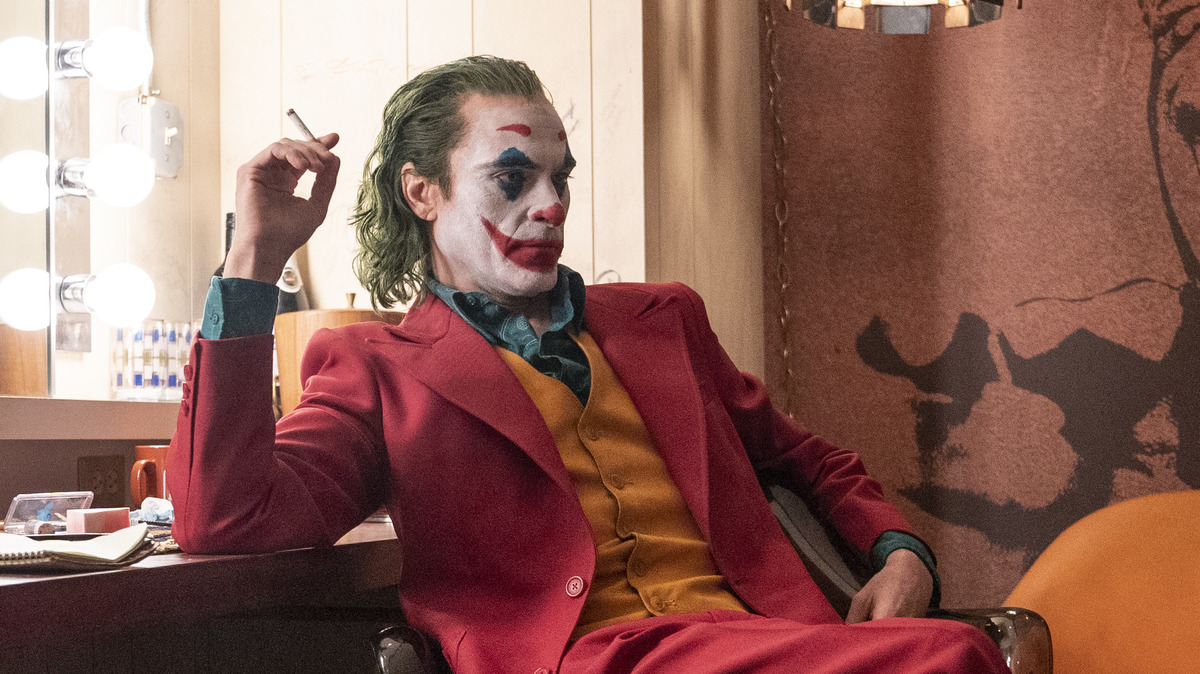 Joaquin Phoenix is Arthur Fleck, a party clown and aspiring stand-up comic who struggles with mental illness and turns violent in Joker.

Director Todd Phillips is fascinated by what he calls "left-footed characters" — people who are "out of step with the world." His most recent film, Joker, is an origin story — of sorts — for the villain in the Batman series.

The movie stars Joaquin Phoenix as Arthur Fleck, a party clown and aspiring stand-up comic who lives in a city overcome by garbage, rats and unemployment. Cuts in social services mean that Arthur is unable to afford the medications he needs to manage his mental illness. As Arthur's mental health deteriorates, he begins to adapt the villainous Joker persona.

Phillips says the film began as an attempt to create a "deep-dive character study" within the genre of the comic book movie. "The whole M.O. of the film was, let's make a comic book film where we run everything through as realistic a lens as possible," he says.

Joker has made more than $1 billion at the worldwide box office and garnered Phoenix a Golden Globe award for acting. But it's also been criticized for glorifying violence.

Phillips maintains the film is less about violence than it is about "documenting mayhem and chaos." He was particularly interested in exploring the consequences of cutting social services for mental health.

"We really thought it was important to shine a light on the system," he says. "I think, like a lot of people, the system's broken, and why not use a film to make a comment on that?"

Very early on when I was meeting with Joaquin about doing the film, something I said that really stuck with Joaquin was that Arthur might feel like this bottled up, uptight, afraid-of-his-own-shadow, one of these invisible people that we pass in the world — but he has music in him. And Joaquin really liked that and really ran with that.

The dance represents a lot of things. It represents, of course, the metamorphosis of Joker coming out. Not to get too heady about this film, but one thing we talked about really early on was this sort of Jungian philosophy, this idea of the shadow. We wear masks in life. This is the sort of thing we put forth to people that know us. But what happens when you take that mask off? And for Arthur, when he removes that mask, that shadow that's revealed is Joker. So that bathroom scene really represents one of the early times of him lifting that mask, so to speak.

What I've done normally is you make the film and you start sending scenes off to the composer and they start writing music for the scene that you've edited together. But Hildur, when I contacted her to do the film, I asked her to just read the script, which she really responded to. And I said, "I want to do something different. Would you just write music based on what you read?"

This is five months, four months, before we started filming. And she started sending me pieces of music just based on the feelings she got from the script. And as I said even to her, the music [is] in Arthur's head. So we were able to have that music when we were shooting, which I've never had before. Most people don't do it that way. And it was really beneficial to us. And it was liberating to us, and it was it sort of infected and affected the set in a great way. It was playing in the camera operator's ear. It was playing for Joaquin. So he was dancing to that piece of music in that scene. It was really, really special.

On the criticism that Joker enables a subculture of men who consider themselves to be "incels," or "involuntarily celibate"

To be honest with you, we didn't know that term [incel] ourselves when we started getting accused of making a movie for incel culture, it was new to us. That definitely wasn't the agenda. I think a lot of [the criticism] that came out came out before people saw the movie. I don't really believe people think that after seeing the film. But I do think it's divisive. There's that famous quote, "Art comforts the disturbed and disturbs the comfortable." And I think Joker tended to do that with some people. ...

To us, it was surprising the reaction, because isn't it the same thing to pretend that these types of people don't exist? Pretend that we're not failing these people. Why is it so bad to shine a light on them and see what makes them that way or try and look into it? That's what it felt like we were doing. It didn't feel like by making a movie about something, you're celebrating it. Representation is not endorsement. It always felt very off to us.

On negative reaction to Joker 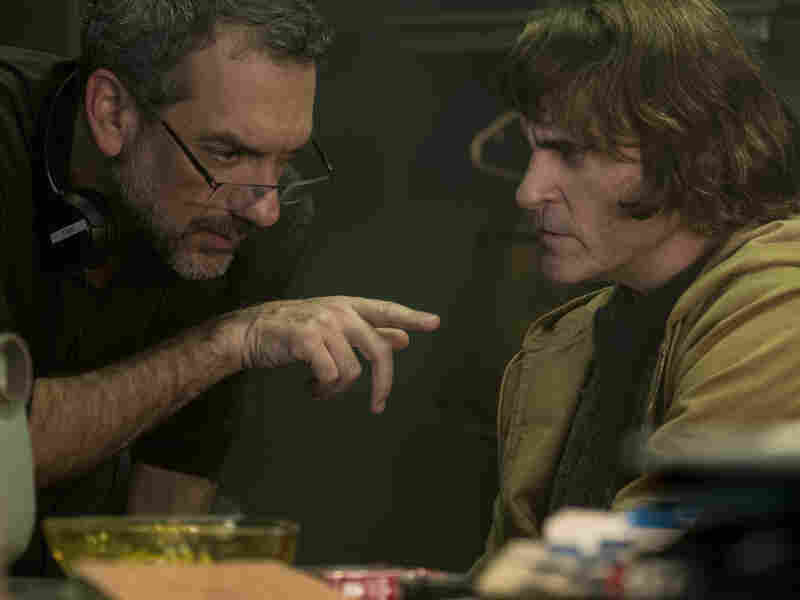 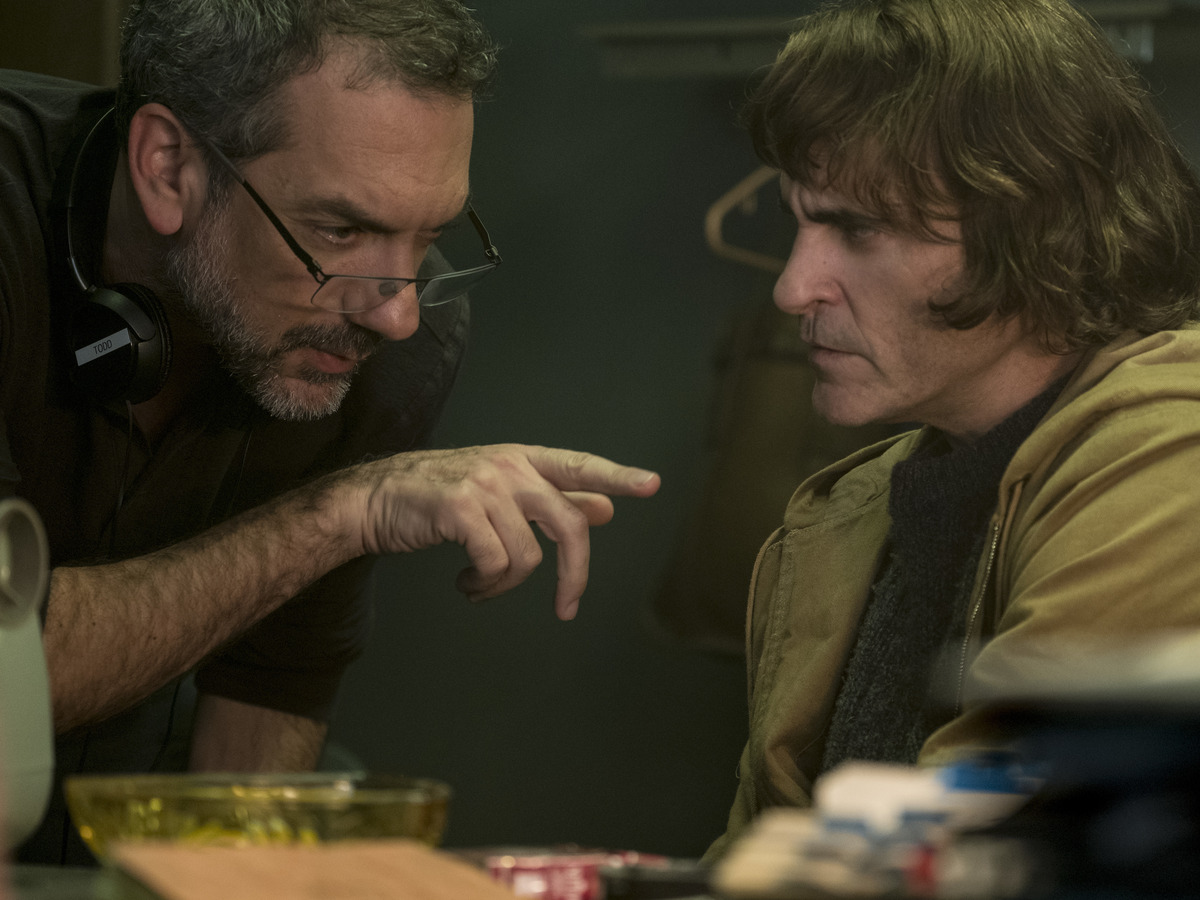 Director and co-writer Todd Phillips consults with Joaquin Phoenix on the set of Joker. Phillips' previous directing credits include Old School and the Hangover movies.

We knew our intentions in making the movie. It kind of bummed us out that it was so divisive. But it does seem to be that we live in an age of outrage now and people look for things to be outraged about and they're going to be outraged just about that comment, probably. It's become a thing. The good news is the movie obviously struck a chord and people were having discussions about it and arguing about its merits. ...

I can't tell you the amount of emails or messages I got on my Instagram of people talking about what a wonderful depiction of mental illness it is. You know, the thing that seemed to resonate most with people is when Arthur writes in his notebook, "The worst part about having a mental illness is people expect you to behave as if you don't." And that really spoke to people that have it. Because you're suffering, but you're not wearing a cast. You're suffering, but you're not in a wheelchair. So people think, what's wrong with you? You're fine. And I think that really connected and resonated with people in a meaningful way. So that kind of thing makes it worth it. Not that that erases everything else. But, you know, it connected with the people that it had to connect with.

Lauren Krenzel and Mooj Zadie produced and edited this interview for broadcast. Bridget Bentz, Molly Seavy-Nesper and Beth Novey adapted it for the Web.