Accessibility links
Thousands More Overseas Taiwanese Register For Key Elections Than For Last Vote Taiwan does not allow absentee voting, so more than 5,000 voters have registered to visit their home county to cast their ballot in Saturday's presidential and legislative elections. 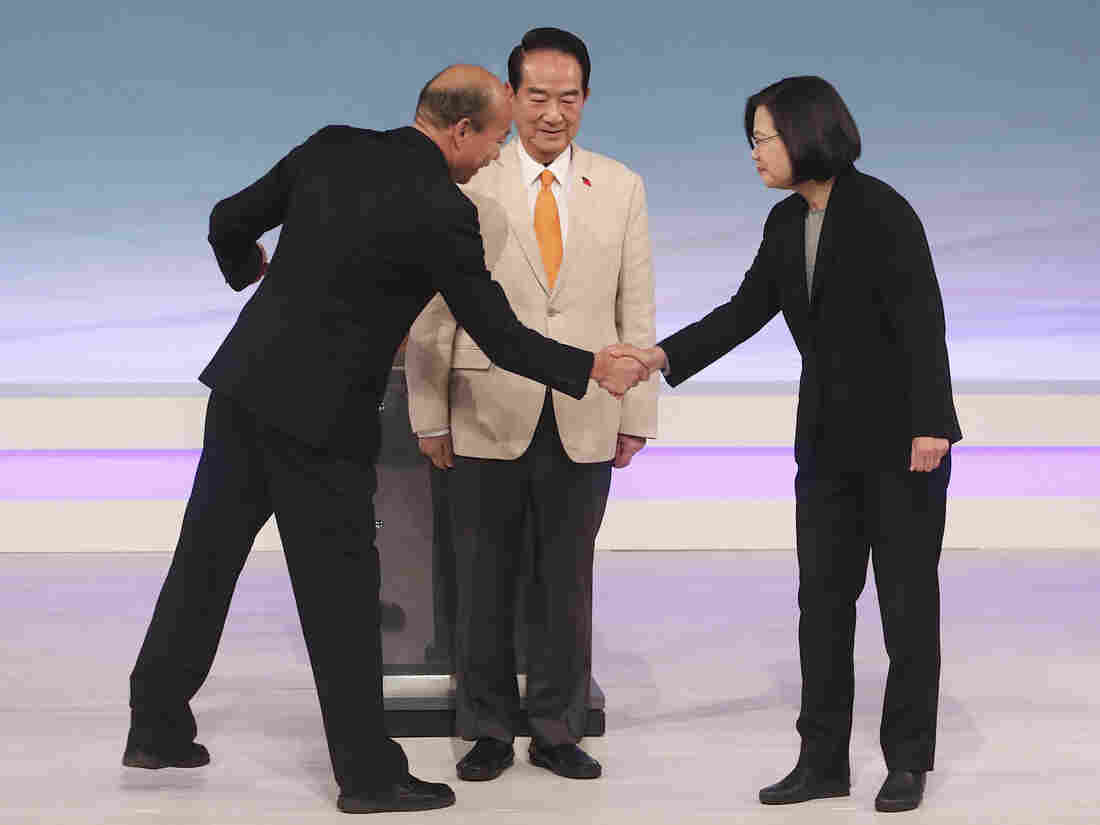 Taiwan's 2020 presidential candidates (from right), President Tsai Ing-wen of the Democratic Progressive Party, the People First Party's James Soong and the Nationalist Party's Han Kuo-yu, greet one another at the start of their televised debate in Taipei on Dec. 29. Taiwan will hold its general elections on Saturday. AP hide caption 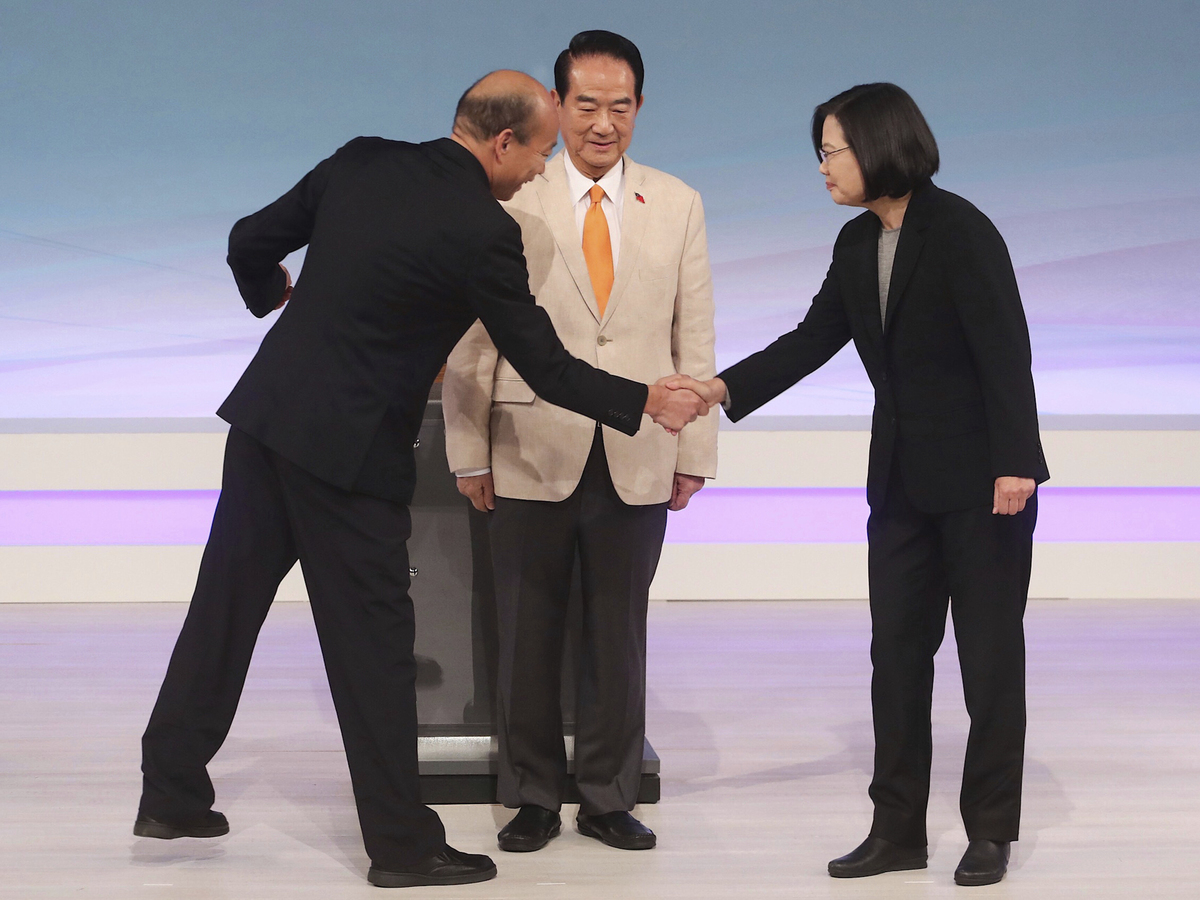 Taiwan's 2020 presidential candidates (from right), President Tsai Ing-wen of the Democratic Progressive Party, the People First Party's James Soong and the Nationalist Party's Han Kuo-yu, greet one another at the start of their televised debate in Taipei on Dec. 29. Taiwan will hold its general elections on Saturday.

Millions of Taiwanese are preparing for key elections this weekend — and some are even flying back by plane to vote.

Taiwan does not allow absentee voting, so those abroad have to return to the exact county where they were born, or where they have a registered household, to cast their ballot.

Saturday's presidential and legislative elections feel particularly urgent for many citizens both on the island and abroad. China's leaders have repeatedly vowed to annex self-ruled Taiwan. The vote has become a tense referendum on how forcefully Taiwanese authorities should counter the Communist Party in Beijing. While Taiwanese President Tsai Ing-wen and her Democratic Progressive Party have taken a firm stance against Beijing, some of their opponents advocate for closer ties.

"For a lot of people overseas, when they're coming back, and when they're voting, it's about securing Taiwan. It's about defending democracy," says Wei-Ting Yen, an assistant professor at Franklin & Marshall College in Pennsylvania. She says she extended a recent visit with family in Taiwan so she could vote.

A total of 5,328 overseas Taiwanese have applied to vote in the upcoming elections, more than twice the number in 2016, according to Taiwan's cabinet-level Overseas Community Affairs Council. Of this year's total, 5,100 ultimately qualified to vote. (Many other Taiwanese abroad spend enough time visiting the island that they don't need to register as overseas voters.)

Separated from the mainland by a narrow waterway, Taiwan broke away politically from the mainland in 1949 after Chinese Nationalist leaders retreated to the island following defeat to the Communists. Many countries recognized the new authority in Taipei as China's legitimate government.

But as communist China's economic and geopolitical power has grown, all but 15 of Taiwan's formal allies have left it for Beijing. The U.S. government says it does not support Taiwanese independence but maintains "strong, unofficial relations with Taiwan."

Chinese President Xi Jinping has urged Taiwan to seek peaceful unification but warned he would not "renounce the use of force" if needed.

Beijing has also pressed Taiwan to follow a similar step toward unification as Hong Kong.

But more than seven months of protest in Hong Kong have hardened even mainstream Taiwanese public opinion against the "one country, two systems" model that China uses to govern Hong Kong.

President Tsai has declared that model a "failure" and said it is "not feasible" for Taiwan.

Yen, who researches and teaches about politics, says Taiwan's unification with China used to seem "like an empty threat ... a fantasy." She says, "But what's been happening in Hong Kong basically shows us a very explicit example of how 'one country, two systems' can play out in the long run."

Tsai's ruling Democratic Progressive Party has rattled Beijing by becoming increasingly forthright in its pro-independence stance. Tsai's opponent, Han Kuo-yu, of the opposition Kuomintang, or Nationalist Party, has drawn criticism by advocating for closer cultural and economic ties with Beijing and by employing campaign language criticized for offensive remarks about women and migrants.

Populist, pro-Beijing candidates like Han mobilized Liu Feng-yi, a doctoral candidate in social work at Rutgers University, to create a series of videos that encourage Taiwanese abroad to go home and vote. The videos feature figures including veteran activists and graduate students urging others to "stand with Taiwan."

"You want to be Taiwanese, not Chinese, and that identification needs to be protected," says Liu, explaining why this election feels like a live or die moment for Taiwan.

Wen Liu, an assistant professor at the State University of New York at Albany, also flew back to Taiwan to vote. "[Voting] is a way for people who care about politics to pay attention, particularly in Taiwan, which is such a young democracy," Liu says.

Liu, who teaches and researches sexuality and gender studies, says her priority was to vote in legislative elections in which dozens of activists are running as first-time candidates on progressive issues such as gender equality and LGBTQ rights. "The election now feels much more personal. ... That's why I also feel more engaged with electoral politics in Taiwan," Liu says.

People think the status quo is no longer an option.

Ellie Chang, a tech worker in the San Francisco Bay Area who went to Taiwan to vote

Ellie Chang, a tech worker in the San Francisco Bay Area, used her vacation days to vote in Taiwan. Her family is solidly pro-Kuomintang, which leans more in favor of Beijing. Chang says she grew up ambivalent about how aggressively Taiwan pushed back against China, because candidates across the political spectrum supported Taiwan's political status quo: de facto separation from Beijing.

"Whenever I voted, I never really considered too much about unification versus independence because it feels like whoever we voted [for], it wouldn't really change anything," Chang says.

But this year, the Hong Kong protests against Beijing's overreach and the detention of hundreds of thousands of Muslims in China's Xinjiang region have jarred Chang so much that she now believes Taiwan needs to protect its de facto independence or even explore options for formal independence.

"I think China has changed their attitude," Chang says, "so people think the status quo is no longer an option."