Accessibility links
The Pedal Steel Guitar's Midlife Renaissance The pedal steel guitar is, for many, inextricable from its roots in country music — but its well runs much deeper than providing some smooth twang.

The Endless Potential Of The Pedal Steel Guitar, An Odd Duck By Any Measure

The Endless Potential Of The Pedal Steel Guitar, An Odd Duck By Any Measure 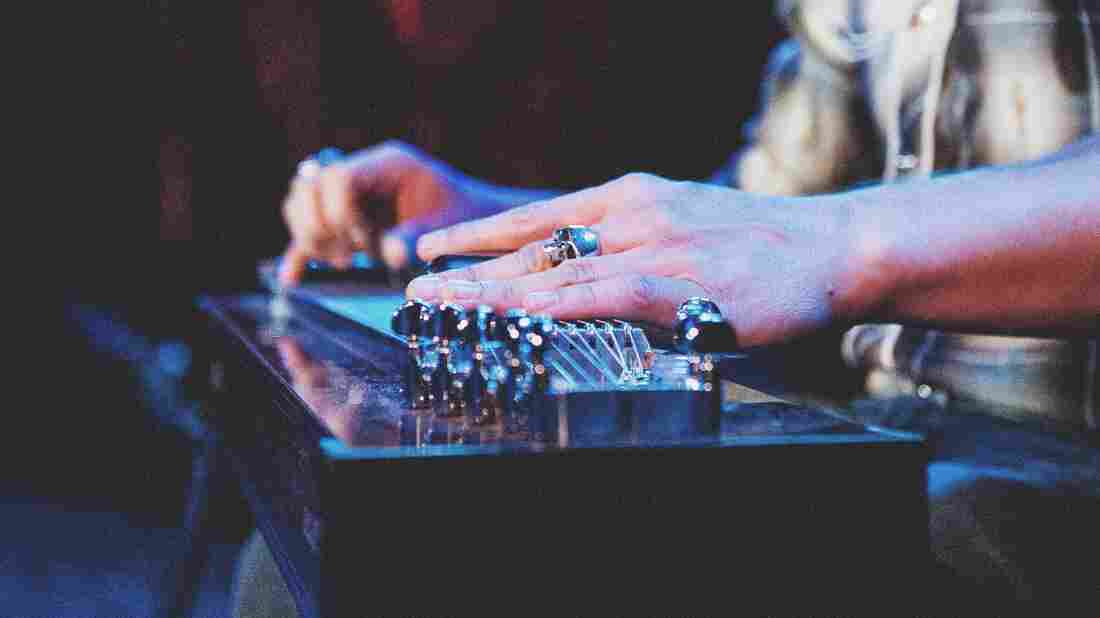 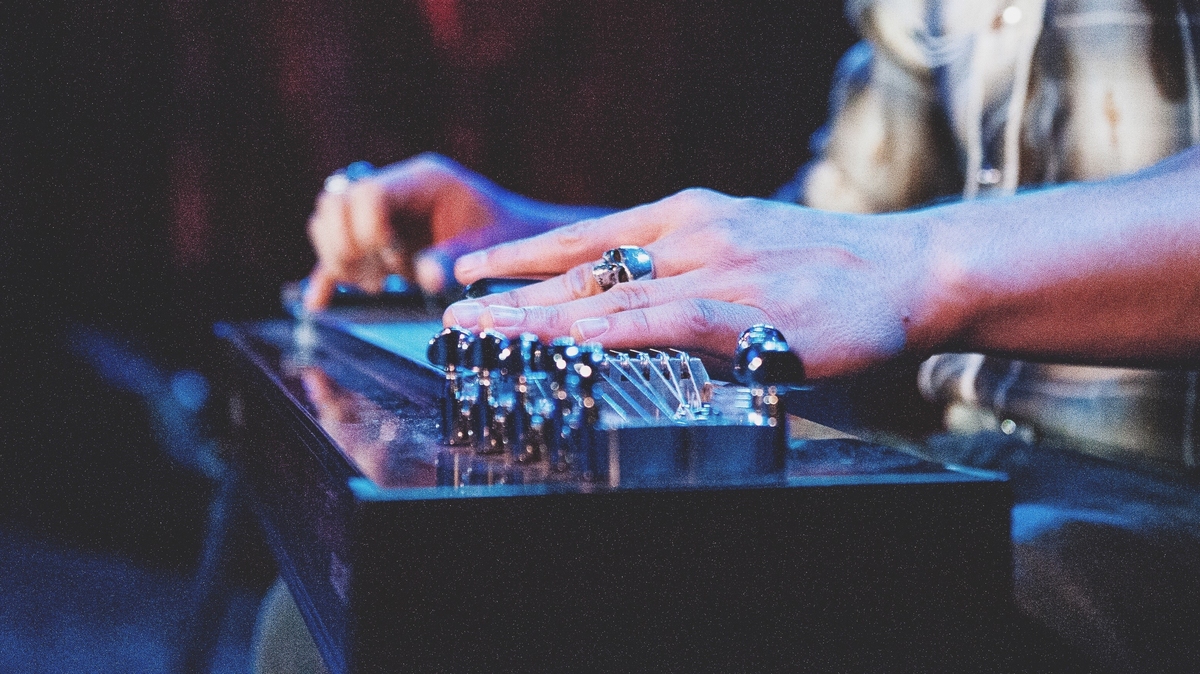 An anchor of the classic mid-century Nashville sound, the pedal steel guitar has been a trusted part of the broader pop palette at least since Jerry Garcia added affable, if primitive, pedal steel to Crosby, Stills, Nash & Young's "Teach Your Children" in 1969 and B.J. Cole provided atmosphere on Elton John's "Tiny Dancer" in 1971. But over the past decade and change, a vibrant new generation of players have taken up the unusual instrument, directing its microtonal bends and aching cries towards more modern expressions.

"I think it's an instrument that begs to be used texturally, and outside the way it was originally designed to be used," says the California-based Chuck Johnson, whose 2017 album Balsams and subsequent live releases have used pedal steel as a tool to generate glowing, complex ambient music. "You can pluck a chord and use the pedals and levers to move some of those voices in different directions, which is something no other instrument can do," he says of its ability to limitlessly bend notes. "Without even moving the bar, you can do really interesting counterpoint. Add to that all the microtonal possibilities. Whether you're moving the bar or using the [knee] levers, it's always a glide to wherever you end up."

An often misunderstood mechanical artifact from another time, the pedal steel remains odd in nearly every way. Its high lonesome moan can float over, or inside, pretty much anything; it can bend notes and blend chords in ways no other analog instrument can; and it sounds like nothing else — even the pedal-less steel guitar, for which it's frequently confused. But for much of its life, it's been synonymous with the wailing cries of country music, to the point of being virtually trapped by the genre.

"When somebody takes the stage [at a pedal steel convention] and plays something other than country, people get up and walk out," says Tom Bradshaw, perhaps the world's leading authority on the instrument. The founder of the now-defunct Steel Guitarist magazine, he has played and repaired pedal steels for nearly a half-century, selling parts through his Bay Area-based Pedal Steel Guitar Products. But Bradshaw worries about the instrument's future. "It's so often that kids are the ones who cause things to really get started and go, but the cost of the instrument is so much that it's prohibitive for kids to get into it," he says. Indeed — outside of classical, and despite its roots in working-class pop music, it is one of the most expensive instruments around, with the cheapest used models going for around $1,000.

Also, it is one of the most difficult-to-learn instruments in the world. Just setting up the pedals and levers requires an intense amount of foreknowledge. There are multiple standard tunings. Its strings usually run in a non-intuitive order. Playing it requires both hands, both feet and, occasionally, both knees. Sometimes there is one guitar neck full of strings, sometimes there are a few — each in its own tuning. Its mechanics have very little to do with guitar as most recognize the instrument, or even the open-tuned Hawaiian lap steel, from which the pedal steel evolved.

Almost exactly in the middle of the 20th century, the lap steel first sprouted pedals with Gibson's Electraharp, and over the next two decades continued to mutate as different players experimented with tuning and pedal combinations in Nashville garages and recording studios. In 1952, Zane Beck added knee levers to bend notes downwards. The year after, on Webb Pierce's "Slowly," Bud Isaacs added a pedal to bend two notes at once. Session musician Buddy Emmons, who died in 2015 and would become the instrument's foremost player, built on Isaac's innovation, introducing a split pedal arrangement that allowed for players to introduce suspended chords and other distinctly "un-Hawaiian" tone bends. Honky-tonk troubadour Ernest Tubb became the beneficiary of the hot new tech breakthrough, with Emmons first employing it on Tubb's 1957 hit "Half A Mind (To Leave You)," also featuring George Jones. Taken together, these technological evolutions transformed the fairly simple lap steel into a metaphor of modernity: a complex machine requiring highly skilled operators, used almost exclusively in country music, a genre in which life's simplicity — whether real or imagined — is very often centered. 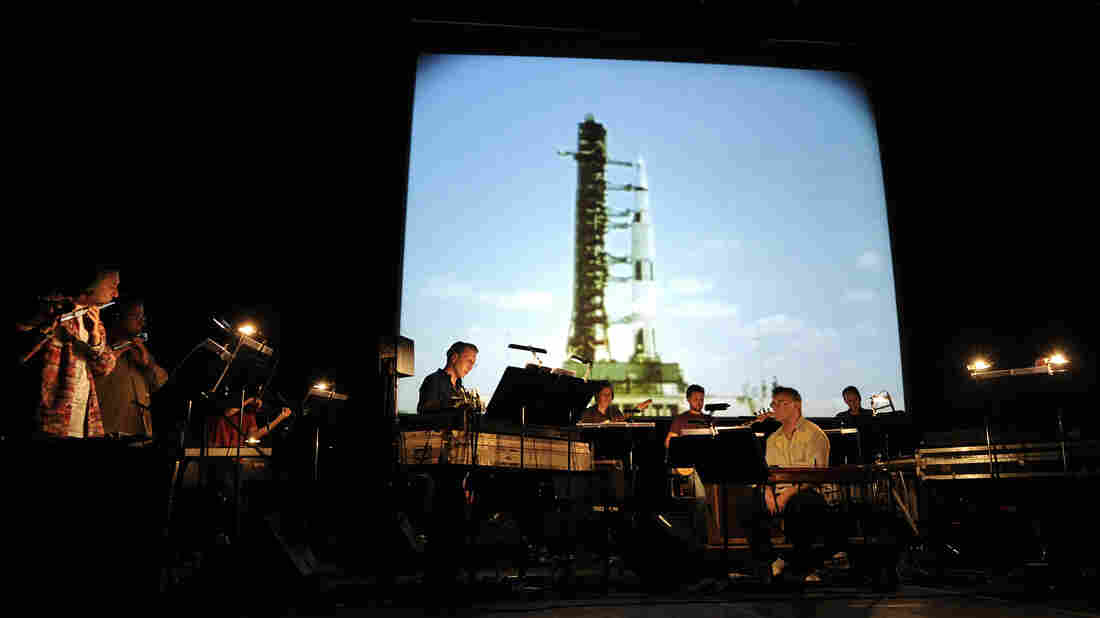 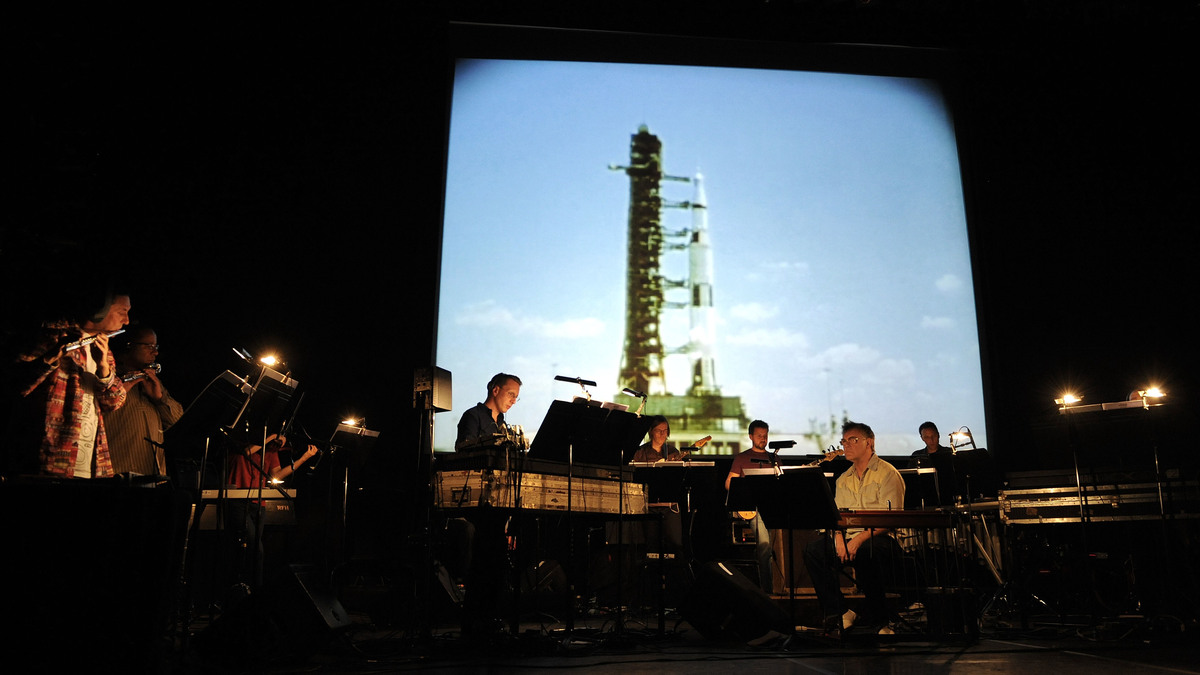 When it was released in 1983, the luminous Apollo: Atmospheres & Soundtracks, was one small step for Brian Eno but one giant leap towards expanding the pedal steel's vocabulary. For the landmark album, an ambient score to the documentary For All Mankind, Eno deployed Daniel Lanois's pedal steel guitar as a reference to the country tapes brought into space by the astronauts, and clearly demonstrated the instrument's future as a leading voice of its own. What Eno called "zero-gravity country music" became a transition point for the instrument, though the revolution has been a slow one

In 2006, Susan Alcorn would title a piece of music, "And I Await the Resurrection of the Pedal Steel Guitar." The sublime tribute to French composer Oliver Messiaen (and subsequent album of the same name) is perhaps near the center of the instrument's expanding territory in the new century, and something of a self-fulfilling prophecy.

The future is now. In the Bandcamp/SoundCloud/"genre-fluid" reaches, the world of outsider pedal steel now constitutes a destination of its own. Heather Leigh has been improvising with pedal steel and voice since the early 2000s, but beginning with 2015's I Abused Animal, she has used it as a counterpoint within some startling experimental songwriting. Chuck Johnson has expanded the instrument's ambient palette into vivid and extended star-fields, most recently with the gorgeous art-pop duo Saariselka. Norwegian jazz player Geir Sundstøl fits it into brooding, proggy soundscapes, the cinematic New York-based SUSS go full noir, and Mute Duo dive into atmospheric improvisation. Daniel Lanois has stayed in the game, too, most lately with 2017's Goodbye to Language and Venetian Squares x Daniel Lanois, a glitchy 2018 collaboration with Venetian Snares.

Says Chuck Johnson, "I don't think you can overstate the importance of the fact that, when you ask who's pushing the instrument forward, the answer is there are these two women — Susan Alcorn and Heather Leigh. More than any other instrument I know, the culture around [pedal steel] is so male dominated."

Alcorn began playing pedal steel with Houston country bands in the early '70s, and recalls the musical insularity of the pedal steel conventions she attended. "People would have albums, mostly of country tunes, and maybe a jazz tune like 'Cherokee' or something like that," she recalls. "Kind of straight-ahead, and maybe 20 years behind the rest of the jazz world. Maybe 30 or 40 years behind."

By the '80s Alcorn had begun to experiment, though it was a lonely calling in Texas. She routed her instrument through a synthesizer for a while, making it sound like other instruments. She arranged John Coltrane's "Naima." She laughs, "I was doing country gigs and listening to Albert Ayler and people at the gigs would tell me I sounded different for some reason. When I got into Ornette Coleman, most of the musicians I knew in Houston didn't want to play with me anymore because it was like I was out-of-tune or something."

But in 1990, Alcorn met accordionist and pioneering electronic composer Pauline Oliveros. "I went to her first 'Deep Listening' retreat," Alcorn says. "Pauline is from Houston, where I was living, and we became friends ... And so that widened my ideas of what you would call music, and certainly what you would call improvisation. That had a profound effect on how I played, and still does."

Lately, Alcorn has been the instrument's on-call emissary in certain, somewhat outré, music circles, playing in the Mary Halvorson Octet as well as Nate Wooley's ecstatic music ensemble, Seven Storey Mountain. (And on last year's Columbia Icefield). If she's setting an example for the wide new ways the pedal steel might work, the musicians who have followed are keen on discovering their own paths.

(One can trace a scattered lineage of unconnected experimentalists outside Alcorn and Lanois. In the '80s, Nigerian juju pioneer King Sunny Adé's highlife orchestra featured pedal steelist Demola Adepoju, whose 1985 solo album Olufe-Mi is due for its own resurrection. "Tiny Dancer" steelist B.J. Cole's 1972 album, The New Hovering Dog, provides an early outlying beacon of outré pedal-steel pop, and he's played with a wide-range of big-eared artists from R.E.M. to Luke Vibert.)

For prolific veteran Jim O'Rourke, who used pedal steel to color the meticulous arrangements of his 1997's album Bad Timing, it took Chas Smith's 1987 LP Nakadai to really connect with the instrument. "That was where the nexus happened," O'Rourke writes in an email, "where those worlds met for me, which only reinforced my love. It might be that the pedal steel is somehow one of the few instruments that is somewhere between an acoustic instrument, in a loose meaning of the term, and the synth/tape music that was and is my main interest." He finally learned to play one for 2015's Simple Songs. 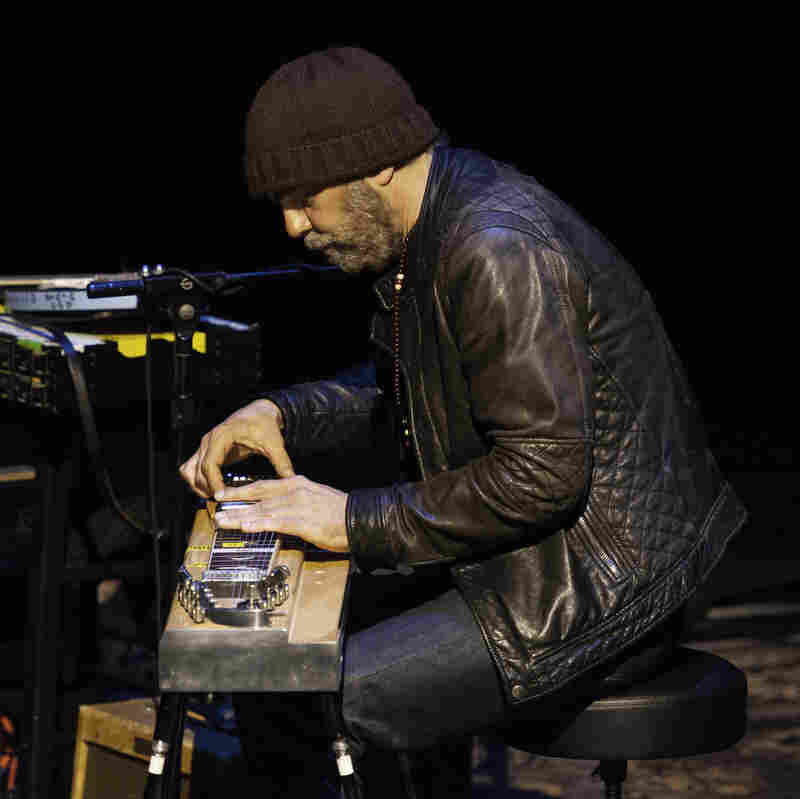 Even after shedding a lifetime of accumulated instruments and studio gear upon moving to Japan, O'Rourke still keeps a pedal steel around. "I am still an absolute amateur, but it's one instrument that still poses a challenge with an actual, foreseeable gain," he notes. "It does your back in if you don't watch it, though."

Pedal steel can be heard these days on album centerpiece tracks by Vampire Weekend (where veteran session player Greg Leisz brings "Hold You Now" back to earth) and the Mountain Goats (where Dan Dugmore glows on the title track of In League With Dragons). It's there (somewhere) in the wall-of-sound saturation of Lana Del Ray's Ultraviolence, and as a signifying point of analog humanity in Phosphorescent's auto-tuned post-apocalyptic "Christmas Down Under."

But the pedal steel will likely remain a semi-secret language. Even in the Steel Guitar Forum, the instrument's main online community, non-country players can feel like members of a permanent musical diaspora. "Fortunately, there are younger people on there and Susan Alcorn posts there all the time," says Johnson, "and posts a lot of things on Facebook that are challenging for that community politically and socially and otherwise."

Tom Bradshaw estimates a global population of somewhere between 40,000 to 50,000 pedal steel guitar players. And though he frets about players aging out, he also acknowledges a large, often invisible, community of what he calls "bedroom players,"hobbyists with no ambitions to set foot on stage.

If nothing else, the age of Bandcamp labels, SoundCloud rap, YouTube covers and viral videos of all stripes is made precisely for those bedroom players, as well as lone steel-slingers out in the wilderness, like the exotica-loving Ztom Motoyama in Japan, or Will Van Horn, who recently covered Aphex Twin's haunted "Avril 14th" on pedal steel. It also sounds fantastic in various modern remix modes, like the chopped-and-screwed Alan Jackson or vaporwave Mike Nesmith. Just as the instrument cuts through large ensembles, it can also cut through the cultural noise, a versatile and seemingly ancient craft that continues to open a portal to a strange, glowing place.