Accessibility links
Australian Fires Prompt Questions About Protecting Houses From Embers Massive Australian wildfires are sending embers high into the atmosphere. When they rain down, they can start new fires far from the original source, and some buildings are more flammable than others. 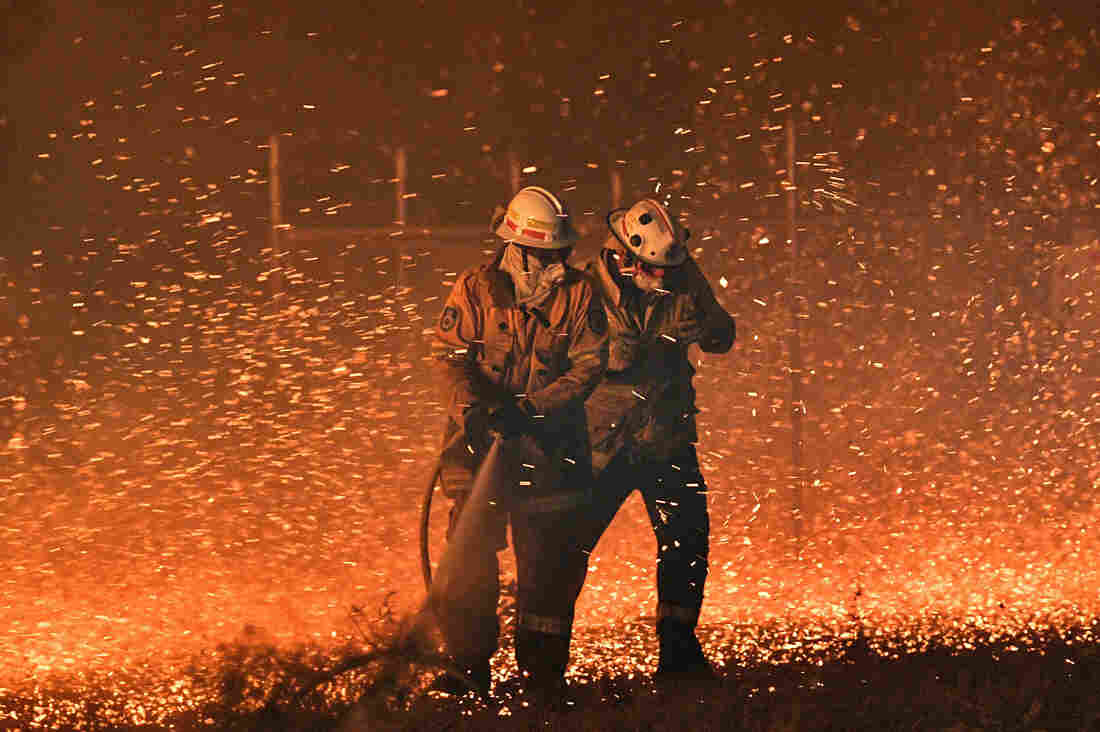 Firefighters struggle to protect homes from the embers generated by bushfires near the town of Nowra in New South Wales, Australia. Saeed Khan/AFP via Getty Images hide caption 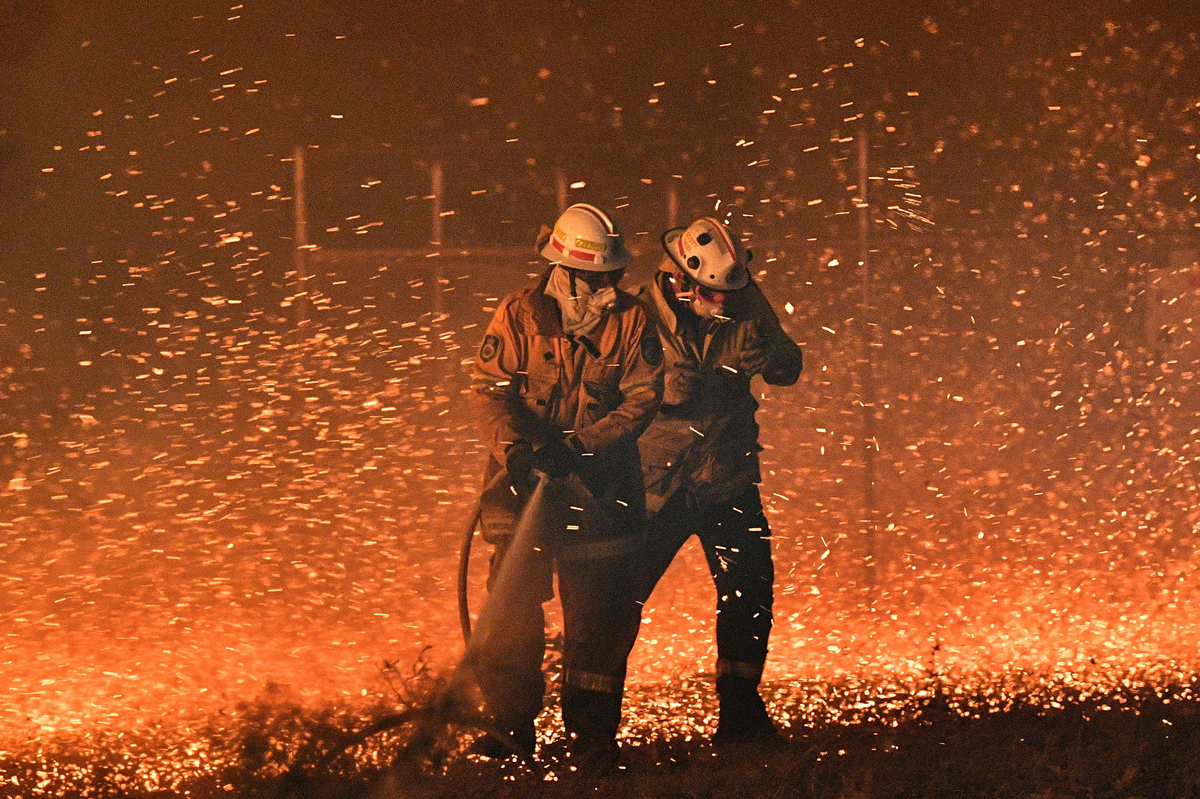 Firefighters struggle to protect homes from the embers generated by bushfires near the town of Nowra in New South Wales, Australia.

Embers are raining down on communities across Australia.

"The strong winds of a thunderstorm came through, but instead of raining water it was raining embers," one resident told The Sydney Morning Herald. Another described how, as he and his family tried to evacuate on New Year's Eve, "burning embers started falling and houses were starting to get lost."

More than two dozen people have died in wildfires that started burning in Australia in September. In recent weeks, fires on the east coast of the country have spread quickly with the help of hot-dry weather, burning through millions of acres and forcing thousands of residents to evacuate. Nearly 2,000 homes have been destroyed.

And the airborne embers — not the flames — are largely to blame.

"We've really started to isolate that it's not necessarily the wall of flames that's igniting homes," says Daniel Gorham, a research engineer with the Insurance Institute for Business and Home Safety in the United States. "Rather, the embers that are traveling ahead of the fire are igniting homes."

The bigger the fire, the farther it can disperse embers, and the larger and more dangerous those embers can be. As climate change exacerbates heat waves, droughts and poor land use decisions in Australia's arid regions, bushfires are getting larger and more intense — exactly the types of blazes that can fling embers for miles.

Embers are blown towards a model home at a research facility run by the Insurance Institute for Business and Home Safety. Some building materials and architectural features are more susceptible than others to ember ignition.

"A bigger fire is more powerful because the heat," explains Gorham. Big, hot fires like the ones currently burning on the east coast of Australia suck in massive amounts of air and burning debris at their base, and sends everything thousands of feet into the air in a giant plume.

"What we're seeing in Australia right now we're covering a lot of area with a lot of flame," Gorham says. "These fires are most definitely generating their own weather, and that weather picks up the embers and the firebrands, lofts them up and casts them way outside the fire perimeter," threatening homes far from the center of the blaze.

Fire scientists have known for decades that fires — especially large fires — could disperse potentially dangerous embers, but it's only in more recent years that the role of embers has begun to influence building regulations in Australia.

A 2010 paper published by Australia's national research agency, the Commonwealth Scientific and Industrial Research Organisation, suggested that the vast majority of homes that burn during bushfires are ignited by embers.

In the last decade, "we've shifted toward a recognition that ember attack on the house, and on things around the house, is the process that's most dominant in causing houses to ignite, and therefore [we're] focusing on building design and landscaping design that's more resistant to embers," says Justin Leonard, a research leader in bushfire urban design at the Commonwealth Scientific and Industrial Research Organisation.

Australia's national building standards are updated every decade on average. The most recent standards were adopted in May 2019.

"One of the things we improved for 2019 was the size of gaps in the envelope of a building," explains Ian Weir, one of the authors of the standards, and a researcher at Queensland University of Technology who studies bushfire responsive architecture. Weir says Australian research makes clear that embers are an overwhelming threat to homes, but American research has been crucial for figuring our how to make houses more resilient to flaming debris.

Weir and his regulatory colleagues relied heavily on research conducted by the U.S. National Institute of Standards and Technology, which looked at how embers get lodged in gaps around doors, windows, roof vents and other architectural features.

"They've done some great research on exactly what is the dimension of the gaps at which we start to lose houses," Weir says, "and they've found that anything greater than 2 millimeters, we enable the embers sufficiently large to ignite wall cavities and furniture and so on."

By requiring that new homes built in fire-prone area close those gaps, they reduced the risk for the whole neighborhood. "Once the house is ignited, the neighboring house is pretty quickly ignited as well," he says.

But as this season's massive fires make clear, the updated building standards can only do so much. For one thing, most standards only apply to new buildings.

"The urban renewal process is slow," Leonard says. "The houses that have been lost in these fires are more than 10-year-old buildings, so they would not have benefited from the improvements in our building regulations."

Weir says Australia's current building and planning regulations also place too much emphasis on removing vegetation from around homes — a principle he says was adopted from California.

The idea is that homes in fire-prone areas should have a buffer where combustible vegetation is kept to a minimum, to make the house easier to defend against fire. But "what we've found in Australia is a much too great a reliance on defendable zones," says Weir. For homeowners, it's less expensive to cut back vegetation than to retrofit houses to be more fire resistant, or to build new homes that meet the latest standards.

The result is that many homes are dangerously flammable. "We're enabling quite conventional homes to be built in very, very extreme bushfire areas, because we're relying on defendable zones to provide the bushfire protection," says Weir.

Embers land in combustible vegetation at a research facility run by the Insurance Institute for Business and Home Safety in South Carolina.

And there's another reason that removing vegetation will not, on its own, help Australia get control of deadly wildfires: desertification.

One of the most pernicious effects of climate change in Australia is the irreversible drying out of the already arid and overworked landscape in many parts of the country. Keeping vegetation intact is the best way to mitigate that. But as fires get more intense and widespread, the pressure to clear vegetation from neighborhoods also increases.

"If we rely on defendable zones, we just keep increasing those zones, that invariably leads to desertification," says Weir, describing a vicious cycle where land-clearing exacerbates drought — which makes extreme fire more likely.

Maintaining the very vegetation that can make it more difficult to defend a home against wildfire, however, "minimizes drought conditions around a home, and reduces that local fire danger index," he explains. "So there's a kind of paradox in the relationship."