Accessibility links
Interview: Ada Calhoun, Author Of 'Why We Can't Sleep' Ada Calhoun talked to a lot of Gen X women about the angst they feel as they approach midlife — the pressure to have it all and the feeling that they should have done better for themselves. 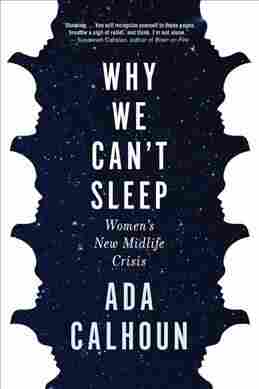 Why We Can't Sleep

The writer Ada Calhoun has talked to a lot of Generation X women about the angst they might be feeling as they hit midlife.

"Being middle-aged in America right now as a middle-class American woman is different than it was for our mothers and grandmothers," she says, "and for a lot of women — not for all of them, but for a lot of them — it is incredibly hard."

She's not talking about poor women or rich women, but middle-class women. And in her new book, Why We Can't Sleep, Calhoun lays out what makes the burdens heavier on Gen X than other generations.

"What I tried to do is isolate women who grew up with a reasonable expectation of success," she says. "They were raised thinking that they could have it all and do it all. The world was their oyster. And then they kind of got to middle age and they found that it was actually quite difficult to have, you know, even some of it. Middle-class women, they often experience shame and disappointment at middle age that, you know, they had all these opportunities and they should have done better."

On how these pressures are particular to these women

I think we were raised with these expectations for ourselves that were different than women in the past. So I think I'm not the only one who heard, like, you can be anything — even president. And women I interviewed told me that, like, they would want to be a nurse and their mothers would say, "No, you should be a doctor." There was this real emphasis on achievement. But it wasn't really coupled with a lot of support.

I think we were raised with these expectations for ourselves that were different than women in the past. ... There was this real emphasis on achievement. But it wasn't really coupled with a lot of support.

I think for our generation, it was a real mandate. So, you know, one boomer woman who'd been very successful who I talked to, she told me that she felt like our generation really invented stress. Like, when she got to the corner office and achieved all these things, everyone was surprised and proud of her. And she said her daughters are doing at least as well as she did. And they feel like, why haven't they done more?

On the structural barriers to "having it all"

Well, I think we were taught that the American dream was real and that that was something that, if we worked hard enough, we could achieve. And I think Generation X women in particular have been really good at working incredibly hard. And yet the statistic that I heard from the Equality of Opportunity Project at Harvard said that only one in four Gen X women will outearn her father. So there's always numbers that I just kept coming across that really show that it's not just us. It's not just us not working hard enough, not doing enough, that actually there are these forces at work against us.

Housing prices are going up; health care costs are going up. The cost of being middle class in America is much higher than it was. And our mothers and grandmothers could afford often to stay home. That's not an option for most of the middle-class Gen X women.

On how to deal with the pressures of middle age

'Coming Out Of The Closet' ... As A Christian

'Coming Out Of The Closet' ... As A Christian

The main thing was reframing it, reframing what I'd been through in my life, and what it meant, and what I had to look forward to. And I just found it really helpful to know that this is a set period of time, that these years — middle age — have been rough, especially for women, for many, many generations. And that it's hard for us, but it's going to be over at some point. So that was part of it. And also, just the expectations that we had were not, maybe, reasonable. Maybe we should have different expectations for ourselves.

One thing that a sociologist who studies the generations told me is that our generation tends to judge ourselves based on everything. So if, you know, in the past the question was, how nice is your home, or how good are you at your job? Now, it's all of the things. So it's, are you a good parent? Are you good at work? Is your house nice? Are you in shape? Are you recycling? It's every single factor in life you have to excel at. And I think that level of pressure is unsustainable.

Nina Kravinsky and Reena Advani edited this story for radio. Petra Mayer adapted it for the Web.