Accessibility links
Trump, Pompeo, Esper Defend Killing Of Iran's Soleimani The president and some of his top lieutenants stated and restated on Tuesday that they feared a new attack was imminent and that they were justified in hitting the Quds Force leader. 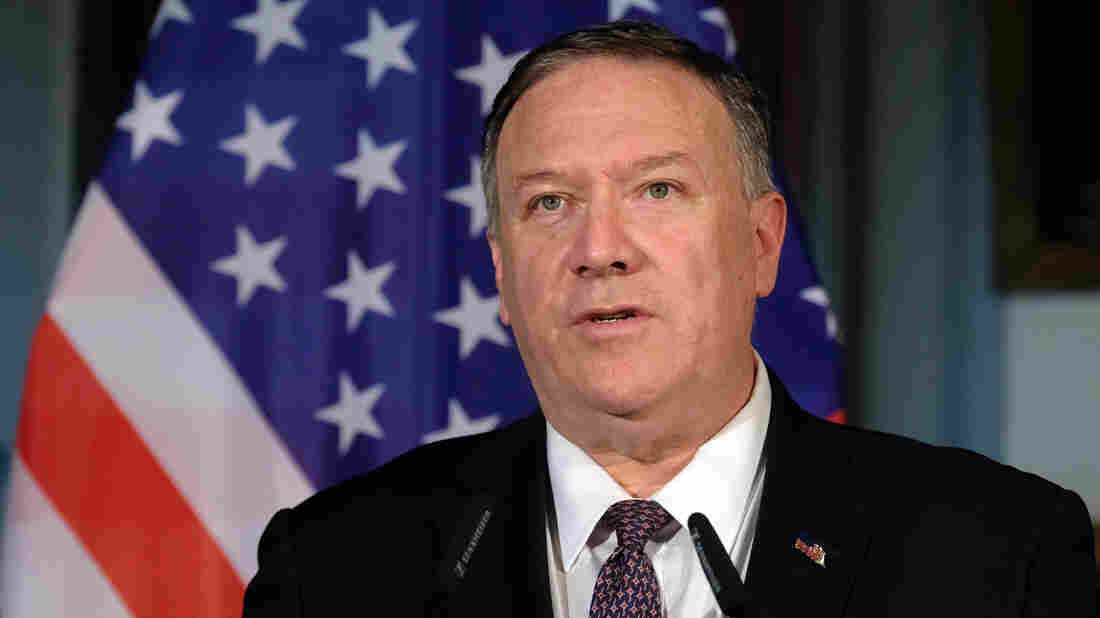 Secretary of State Mike Pompeo said the U.S. strike against a top Iranian military commander "fit perfectly within our strategy in how to counter the threat of malign activity from Iran." dpa Picture-Alliance via Getty Images hide caption 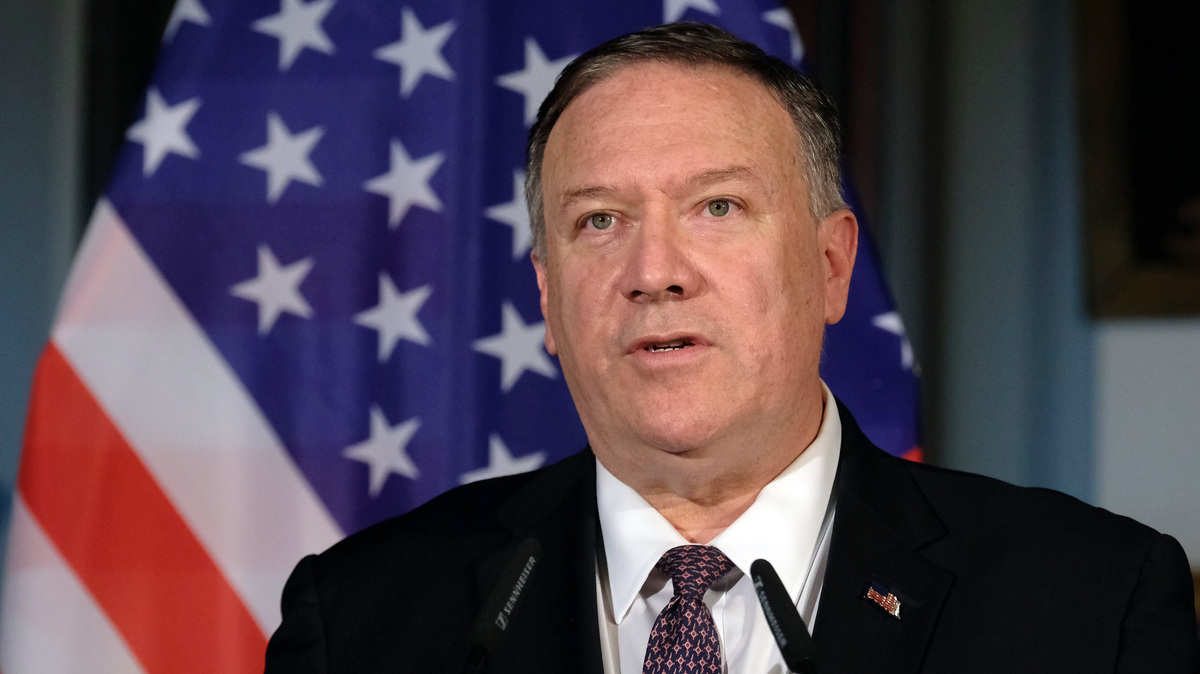 Secretary of State Mike Pompeo said the U.S. strike against a top Iranian military commander "fit perfectly within our strategy in how to counter the threat of malign activity from Iran."

President Trump and his top deputies offered a full-throated defense on Tuesday of the American strike against Iran's top foreign legion commander, stressing what they called the urgent danger of an attack he had been plotting.

The killing of Quds Force commander Qassem Soleimani last week has ratcheted up tensions between Tehran and Washington, prompting vows of retaliatory strikes.

Defense Secretary Mark Esper said Tuesday that the attack Soleimani was planning against Americans or U.S. installations was a matter of "days" away, although there were few details about who, what, how and precisely when.

But the defense secretary, his colleagues and the president all said they believed they had done their duty to protect Americans and now Iran has an opening to step back from violence and opt for a return to the negotiating table.

"We are prepared to have this discussion with them, but we are just as prepared to deliver a forceful response," Esper said in a news conference at the Pentagon.

The Defense Department is sending thousands more troops to the Middle East as well as Air Force bombers and naval warships. American installations across the region have been placed on high alert and normal operations — including against the Islamic State — have been paused. Americans have been urged to leave Iraq.

All the same, and notwithstanding calls within Iraq for American forces to leave and vows by Iran for revenge, Trump and administration leaders made clear they're standing by their decision to kill Soleimani.

"It was the right decision. We got it right," Pompeo told reporters during a briefing at the State Department. He added that the strike "fit perfectly within our strategy in how to counter the threat of malign activity from Iran more broadly."

A step back from sensitive targets

The biggest change in tune on Tuesday was over the prospective reaction by American forces to the response that Iran has vowed.

Trump had threatened to attack 52 sites inside Iran, including religiously or culturally significant ones, as a way to try to constrain Iranian retaliation.

Trump and some supporters don't only want American forces to defend, for example, an embassy against an attack. They also want the United States to respond to an attack on an embassy farther afield in the Middle East with a strike deep inside Iran, either against a culturally important target or infrastructure such as an oil refinery.

But Pompeo and Esper both responded to questions about that on Tuesday by stating that American forces would obey the laws of armed conflict, which preclude that kind of targeting.

"Every target that's being reviewed, every effort that's being made, will always be conducted inside the international laws of war," Pompeo said.

Esper, for his part, said, "I'm fully confident ... the commander-in-chief is not going to give us an illegal order."

Trump tried to take a similar line with reporters at the White House but still make it clear that he is prepared to attack targets inside the Islamic Republic.

"If that's what the law is, I like to obey the law," Trump said. "But think of it: They kill our people, they blow up our people, and then we have to be very gentle with their cultural institutions. But I'm OK with it. It's OK with me. I will say this: If Iran does anything that they shouldn't be doing, they're going to be suffering the consequences and very strongly."

As NPR reported on Monday, the U.S. cannot legally target cultural sites, according to the Hague Convention the country signed in 1954, which mandates "refraining from any act of hostility" directed against cultural property.

Strategic vision for the Middle East

Trump also sought to square what he calls his careerlong opposition to American operations in the Middle East with his current orders to deepen the U.S. military presence in the region — and his threats to sanction Iraq if it tries to eject American forces.

The United States should get out of Iraq, he argued, but not now and not like this.

"At some point we want to get out," he said. "But this isn't the right point. The other thing is, if we do get out, we've spent a tremendous amount of money on building airports and building one of the largest embassies we have in the world. And we want to be reimbursed to the various costs that we have had. They're very significant ... We don't want to be there forever."

The president emphasized how important Iraq is as a platform from which the United States can combat Iran.

If Baghdad tries to force out American troops now, Trump said, "I think it's the worst thing that can happen to Iraq. If we leave, that would mean that Iran would have a much bigger foothold, and the people in Iraq do not want to see Iran running the country."

Iranian Foreign Minister Mohammad Javad Zarif told NPR in an interview Tuesday that the U.S. "will pay" for the assassination of Soleimani as well as Iraqi militia commander Abu Mahdi al-Muhandis. Zarif called the drone strike an act of "both terrorism and war."

In that same interview, Zarif told NPR's Mary Louise Kelly in Tehran that the U.S. failed to issue him a visa so he could attend a gathering of the U.N. Security Council in New York.

Pompeo was asked about that during his remarks but said he would not comment on visa matters. The secretary of state did seek to pour cold water on Zarif's claim that at the time of his death, Soleimani was traveling to Baghdad on a diplomatic mission.

"Zarif is a propagandist of the first order," he added. "It's not new, we've heard these same lies before. It's fundamentally false."

Members of Congress are slated to get closed-door briefing on Iran from top administration officials on Wednesday.

Pompeo is expected to be joined by CIA Director Gina Haspel and Chairman of the Joint Chiefs of Staff Mark Milley. The session comes as House Democrats are mulling ways to limit the president's authority to order military action in Iran unilaterally.

At Tuesday's briefing, Pompeo was also asked about his decision to stay on as secretary of state instead of leaving his post, as he was widely expected to, in order to pursue an open Senate seat in Kansas.

"No real news there. I've said that I'm going to stay serving as secretary of state so long as President Trump shall have me," Pompeo said.

He added: "You can accuse me of being inconsistent elsewise, but not on that one."