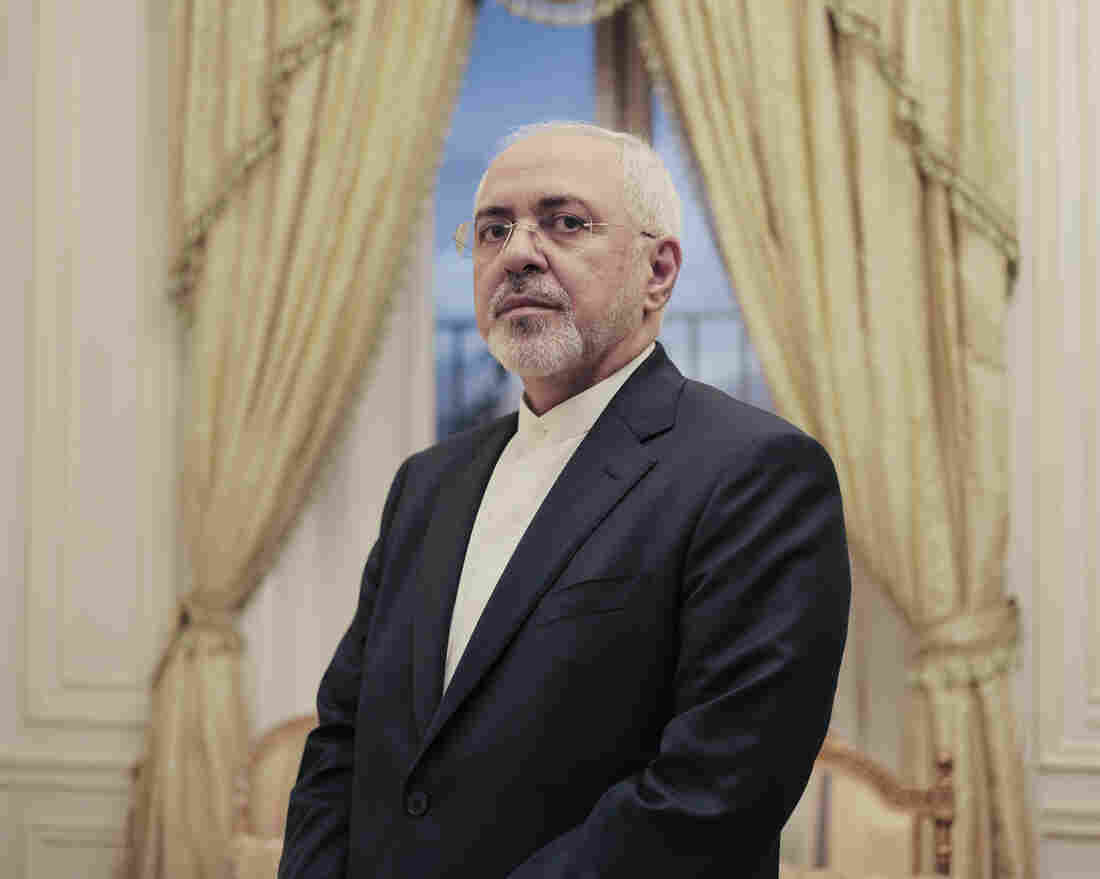 Iranian Foreign Minister Mohammad Javad Zarif in 2018. He was interviewed by NPR on Tuesday. Elias Williams for NPR hide caption 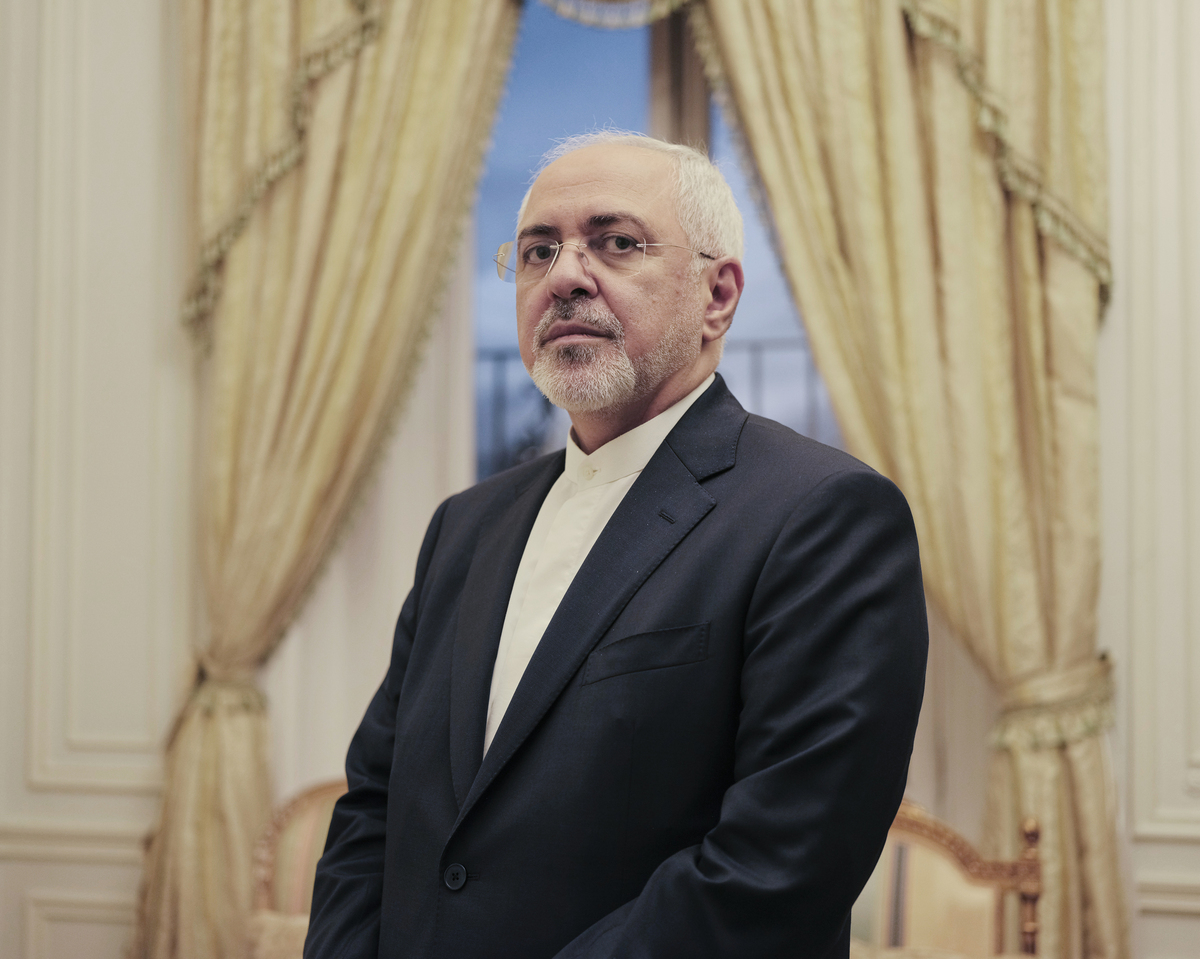 Iranian Foreign Minister Mohammad Javad Zarif in 2018. He was interviewed by NPR on Tuesday.

Iranian Foreign Minister Mohammad Javad Zarif talks to All Things Considered's Mary Louise Kelly in Iran about heightened tensions between Tehran and Washington after the U.S. killing of Iranian Gen. Qassem Soleimani. Here's the full transcript of their conversation.

Mary Louise Kelly: Foreign Minister, thank you. Our time is short, so I will be direct. Does Iran consider the U.S. killing of Qassem Soleimani an act of war?

Mohammad Javad Zarif: It's an act of terrorism and an act of war.

Terrorism and war, you believe, on behalf of the U.S.?

Yes. But it has three basically characteristics. One against Iraq. It violated territorial integrity and sovereignty of Iraq. And it also violated the agreement that they had with the Iraqis. And that is why the Iraqis decided to kick them out.

It hurt the feeling of many people across Iran and the rest of the world. And the reaction to that would be to make it almost impossible for the U.S. to continue to stay in this region. That is why I say the days of the United States in our region are numbered.

Third is they attacked a citizen and a senior official of Iran. We're responsible under international law for protection of our citizens. This was an act of aggression, an armed attack, albeit a cowardly armed attack, against an Iranian official in foreign territory. It amounts to war, and we will respond according to our own timing and choice.

But we were on the streets in Tehran yesterday, we saw flags, banners with the words deep revenge written across them.

Can you be specific?

There's nothing on or off the table?

U.S. would differ? Well, tell them to explain how they want to attack cultural sites. That's a war crime. How do they want to — I mean, these are not off the record. These are statements made by the president of the United States. Disproportionate manner.

The defense secretary, as you well know, Mark Esper has said in the United States, the U.S. will not be attacking cultural sites.

Well, I've heard that the president in the United States is the commander in chief. And as you say, the buck stops here. So, unless President Trump changes his own threats, I don't think that. ... The defense secretary works on behalf of the president, not as a as an independent entity. But the point is, the United — the secretary of state, of all people, has said if Iran wants its people to eat, it has to listen to the United States. That's a crime against humanity. Starvation is a crime against humanity, creating individual responsibility before the International Criminal Court. These are the statements that are being made. I'm not making them up. I mean, the Newsweek headlines — they're, I mean, they're headlines in the United States.

You were supposed to have —

Not this case. Actually, the president of the Security Council invited me over 20 days ago. The current president.

Will you be able to go?

No, unfortunately, because Mike Pompeo decided that I was too dangerous for the United States.

How did — has he communicated that directly to you? How did you find out?

Not to us, to the secretary-general of the United States [sic]. He has said we didn't have enough time to issue a visa. I don't know how terrible bureaucracy the State Department has that in 25 days, they couldn't issue a visa for a foreign minister. I'm not an unknown entity.

But you are — this is final, this is definite? Because I know there has been confusion in past about visas.

From his point of view it is. And I'm not that crazy about going to the United States anyway.

You're just, just happy to skip this trip.

Secretary Pompeo, in past, when this has been an issue with Iranian diplomats such as yourself coming to the United Nations in New York and visa issues have been difficult, has said a nation that has killed U.S. citizens, that has knowingly killed hundreds of Americans — why should they be allowed to come to the U.S.? Why should a nation that knowingly supports international terrorist groups, why should they be allowed to come address the United Nations?

Well, now, I mean, these allegations are easy to make. But when we see who is killing and who is maiming and who has killed a thousand Iraqi scientists --

Iran has sent weapons that have killed hundreds of Americans in Iraq. You know this.

Who killed — who killed 290 Iranians, civilians in a civil airliner?

You're referring to an airplane bombing.

Many sides are killing a lot of people in Yemen, unfortunately.

Unfortunately, it's a war that the United States —

Including the Houthis, who Iran backs.

May I turn you to the nuclear deal? We have heard from Iran that Iran will suspend compliance with the remaining limits in the nuclear deal. Is this the end of the deal?

No, we didn't say we will suspend complying with the remaining limits. We said that we have taken four steps. Our fifth step would be to suspend compliance with the limit on the number of centrifuges. That means effectively that all limits on our centrifuge program are now suspended.

Why do this now?

Because it's it's at the two-month period that we have said before that if the Europeans do not comply with their own obligations, we will take measures.

You see, JCPOA was negotiated not in an --

You're using the formal name for the nuclear deal. Go on.

Yeah. Not in an atmosphere of trust, but in an atmosphere of mistrust. That is why we put in place the mechanisms for dealing with violations. And that mechanism was triggered by Iran after U.S. withdrawal. And in November of 2018, we informed that we have exhausted that mechanism, and we have no other choice but to start reducing our level of compliance. But we made it very clear that we are ready to go back to full compliance the minute they start complying with their own. Doesn't mean that the United States should comply. Means that Europe should comply.

MLK: Still, it's not good news for the nuclear deal which you personally negotiated.

Well, it's not good news. Certainly not. And we're not happy about this, but it's a remedy. When you execute somebody or you imprison somebody for committing an offense, you certainly are not happy for depriving somebody of their life or their liberty. But you have to do it because it's a remedy that the law has provided in order to prevent lawlessness. This is a remedy provided in the deal.

Last question. There's something like five U.S. citizens still being detained in Iran, including the aging Baquer Namazi, who is in ill health.

He would probably prefer not to be.

Is there hope for future exchanges?

Well, I don't think that this action by the United States helped. We had proposed a universal exchange of all prisoners and we were doing that in good faith. We released an American citizen for an Iranian citizen. That could have continued. But now —

You're talking about the recent exchange of a Princeton graduate student who is an American held here.

And an Iranian professor —

-- who had been held without —

And those channels are still open?

I don't think at this time we can discuss those issues. We have to deal with the present issue at hand, unfortunately.

If I'm hearing you correctly, you're saying there will not be future exchanges while the situation is so tense between Washington --

Well I think those talks are certainly suspended now.

Foreign Minister Zarif, thank you for your time.

Thank you for being here.

Editor's note: NPR's Mary Louise Kelly described a 1988 attack on an Iranian civil airplane as a bombing. The U.S. Navy actually fired missiles at Iran Air Flight 655. Earlier in the conversation, Iranian Foreign Minister Mohammad Javad Zarif mentioned the secretary-general of the United States. He was referring to the United Nations secretary-general.