Accessibility links
McConnell To Move Impeachment Trial Forward Without Democrats The Senate majority leader says he has the votes to press ahead and won't seek a deal with Minority Leader Chuck Schumer, who demanded witness testimony and rules for evidence.

Listen · 3:44 3:44
McConnell Will Move Ahead With Impeachment Trial Rules Without Democrats' Support 3:44 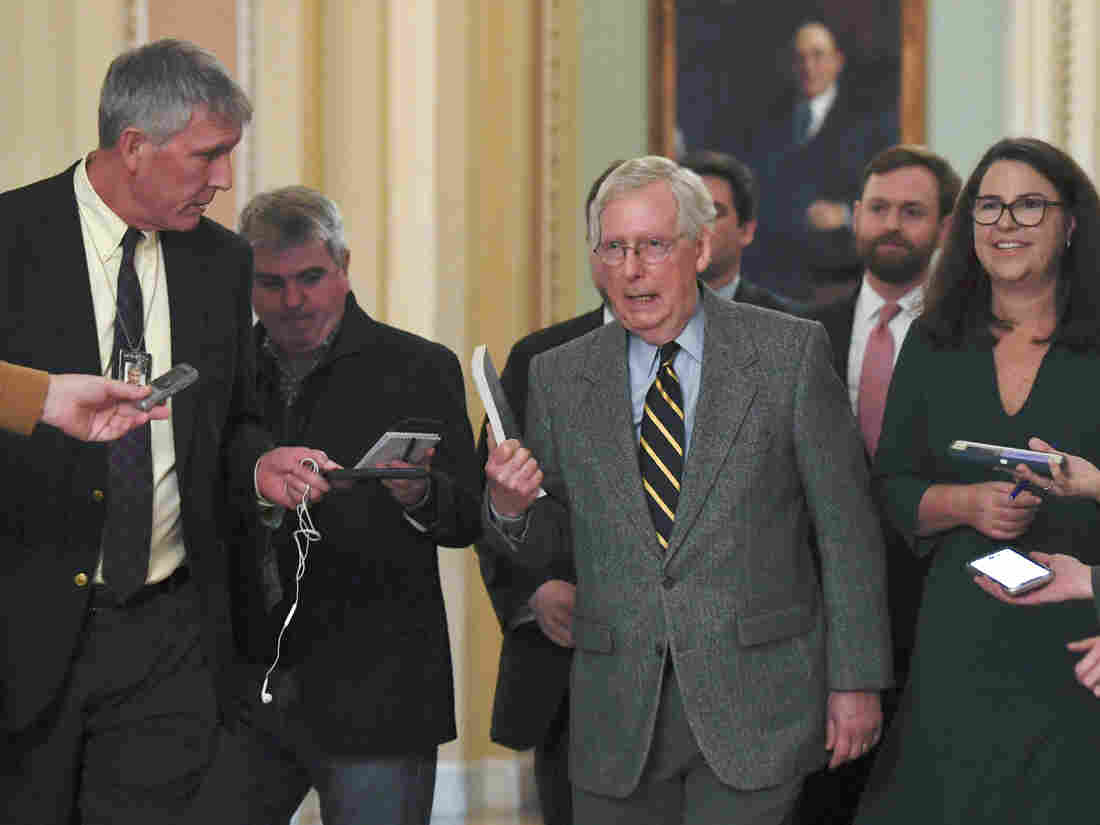 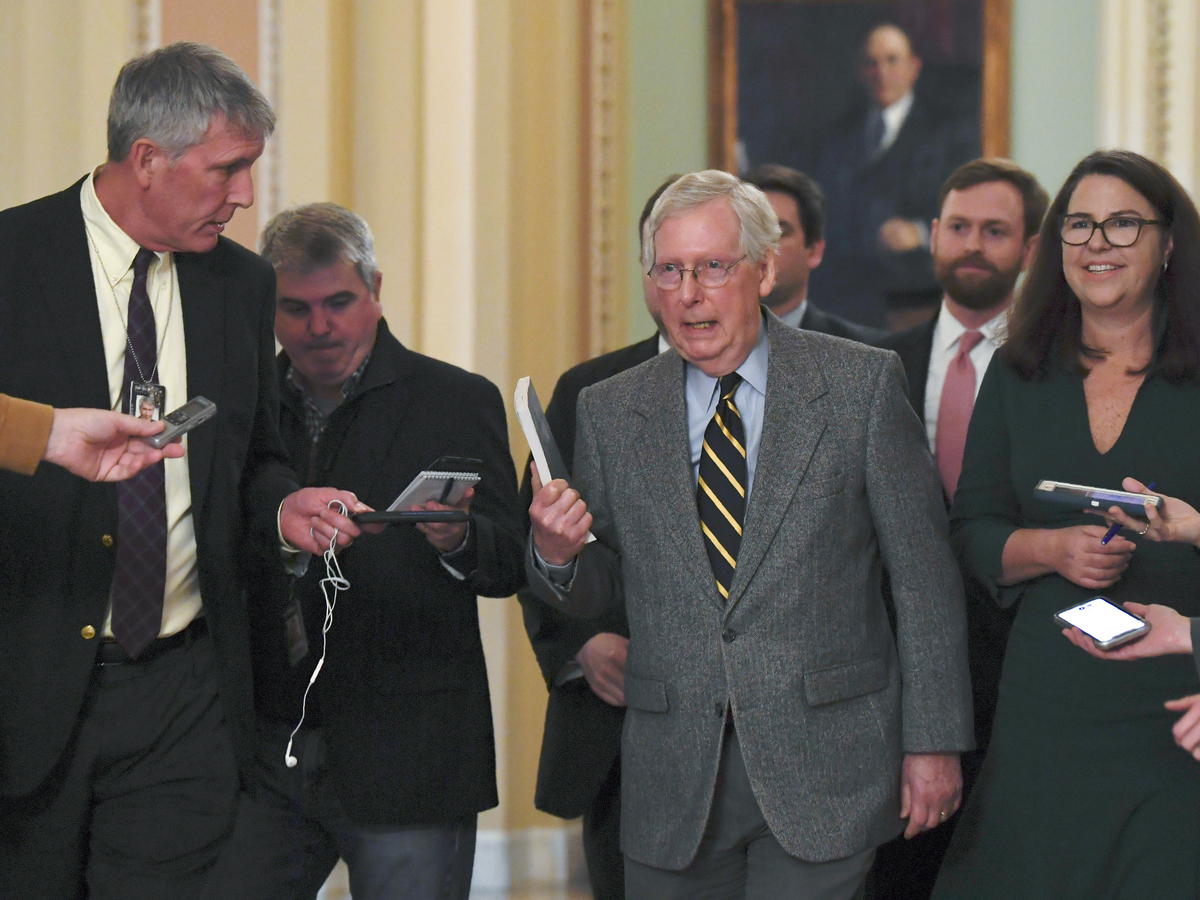 Senate Majority Leader Mitch McConnell, R-Ky., says he has the votes to establish rules for the Senate impeachment trial of President Trump without support from Democrats.

McConnell told reporters Tuesday that he has abandoned attempts to reach an agreement with Senate Minority Leader Chuck Schumer, D-N.Y., after weeks of public bickering over Democrats' demands to agree on a set of witnesses and rules for evidence in the trial. The decision to move ahead with the rules puts new pressure on House Speaker Nancy Pelosi, D-Calif., to release the House-passed articles of impeachment so that a trial may begin.

The Trump Impeachment Saga Is About To Heat Back Up

"We have the votes once the impeachment trial has begun to pass a resolution essentially the same, very similar to the 100-to-nothing vote in the Clinton trial, which sets up as you may recall what could best be described as a maybe a phase one," McConnell said about the process. He said the resolution would lay out a process for arguments from the prosecution, arguments from the president's defense team and written questions from senators.

McConnell noted he is modeling the rules on the 1999 trial of President Bill Clinton. At the time, senators voted unanimously to approve a basic outline of how the trial would be conducted. They saved the question of witnesses and evidence for a second set of rules that were later approved along party lines. McConnell said he anticipated addressing questions about witnesses after the first phase of the trial was complete.

But Senate Democrats say the facts and circumstances of the Trump impeachment process cannot be compared to the Clinton trial. They say that the White House blocked key witnesses from appearing before the House and that they need to be vetted in the Senate.

"Democrats believe that a fair trial means that all of the relevant facts come out," Schumer said. "And witnesses and documents are part of that fair process."

Pelosi, McConnell And Their Impeachment Strategies

Senate Democrats have refused to agree to that two-step process, saying it makes it less likely that any new witnesses will be called. Schumer has called it "a poorly disguised trap."

Schumer and other Democrats say they need to hear from four witnesses who refused to testify before the House. The list includes acting White House Chief of Staff Mick Mulvaney and former national security adviser John Bolton. Their demands were heightened this week after Bolton announced he would testify under a Senate subpoena.

"Momentum for uncovering the truth in a Senate trial continues," Schumer said in a statement following Bolton's announcement. "If any Senate Republican opposes issuing subpoenas to the four witnesses and documents, we have requested they would make absolutely clear they are participating in a cover-up."

McConnell said the Senate cannot move ahead with a vote on the resolution until Pelosi sends the articles over from the House.

Schumer suggested that he believes Pelosi will do so soon and maintained that her strategy helped put pressure on Republicans to answer questions about witnesses. Pelosi's office declined to comment on her plans.

Under existing Senate rules, Democrats can still try to call witnesses once a trial has begun, but they would need 51 votes to do so. That means persuading four Republicans to agree, a high bar in the political trial of a GOP president.

McConnell's decision to forgo further negotiations on the rules also signals that he believes that at least 51 of the 53 Senate Republicans will vote to support his plan. Sen. Kevin Cramer, R-N.D., told reporters Tuesday that McConnell has been clear about his plans and that top Senate GOP leaders have been counting votes for the rules in recent days.

"He's made no bones about his desire to do it that way and he has made the case to us privately, to the country publicly," Cramer said. "His floor speeches have been filled with that and so he's been very transparent about the process."

Democrats had hoped to persuade some moderate Republicans, like Sens. Lisa Murkowski, R-Alaska, Susan Collins, R-Maine, and Mitt Romney, R-Utah, to push for a bipartisan process. Collins and Murkowski in particular have said they are uncomfortable with statements McConnell has made about being "in lockstep with the White House" on impeachment.

But in recent weeks, most Republicans, including moderates like Collins and Murkowski, have said they support McConnell's plan to base the process on the Clinton trial.

Collins told Maine Public Radio that she would like the rules to be adopted with unanimous bipartisan support, but she "can't imagine anything like that happening today, regrettably."

McConnell did not provide a timeline for voting on the rules, but by simply establishing a plan, he now shifts greater pressure on Pelosi to release the articles of impeachment. Pelosi has said she is withholding the articles to try to pressure McConnell to agree to Schumer's request for witnesses.

The House cannot choose our impeachment managers until we know what sort of trial the Senate will conduct.

President Trump blocked his own witnesses and documents from the House, and from the American people, on phony complaints about the House process. What is his excuse now?

The Senate is scheduled to consider judicial nominations for the remainder of the week but could interrupt their plans to vote on the rules once the articles of impeachment are received.