Accessibility links
Iranian-Americans Fearful After U.S. Authorities Hold Dozens On Canadian Border As many as 200 were held for questioning at a border crossing near Seattle. Some Iranian Americans are so concerned that they are canceling plans to travel abroad. 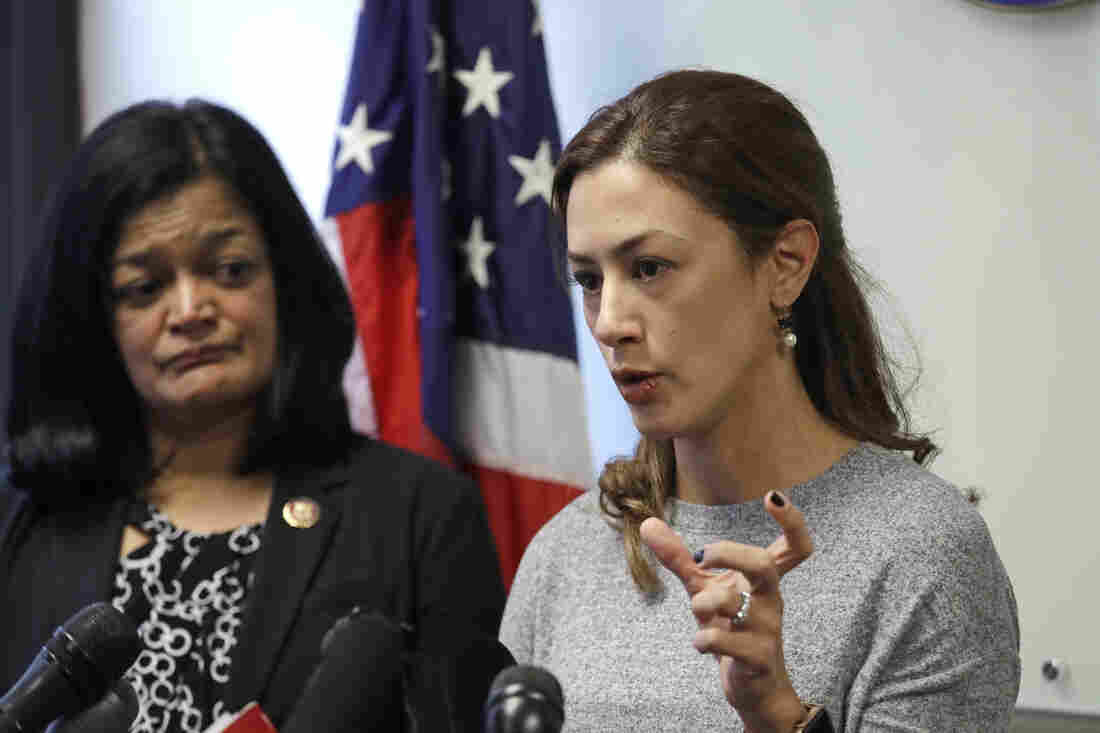 Rep. Pramila Jayapal, D-Wash., looks on as Negah Hekmati talks about her hours-long delay returning to the U.S. from Canada with her family days earlier, at a news conference on Monday. Elaine Thompson/AP hide caption 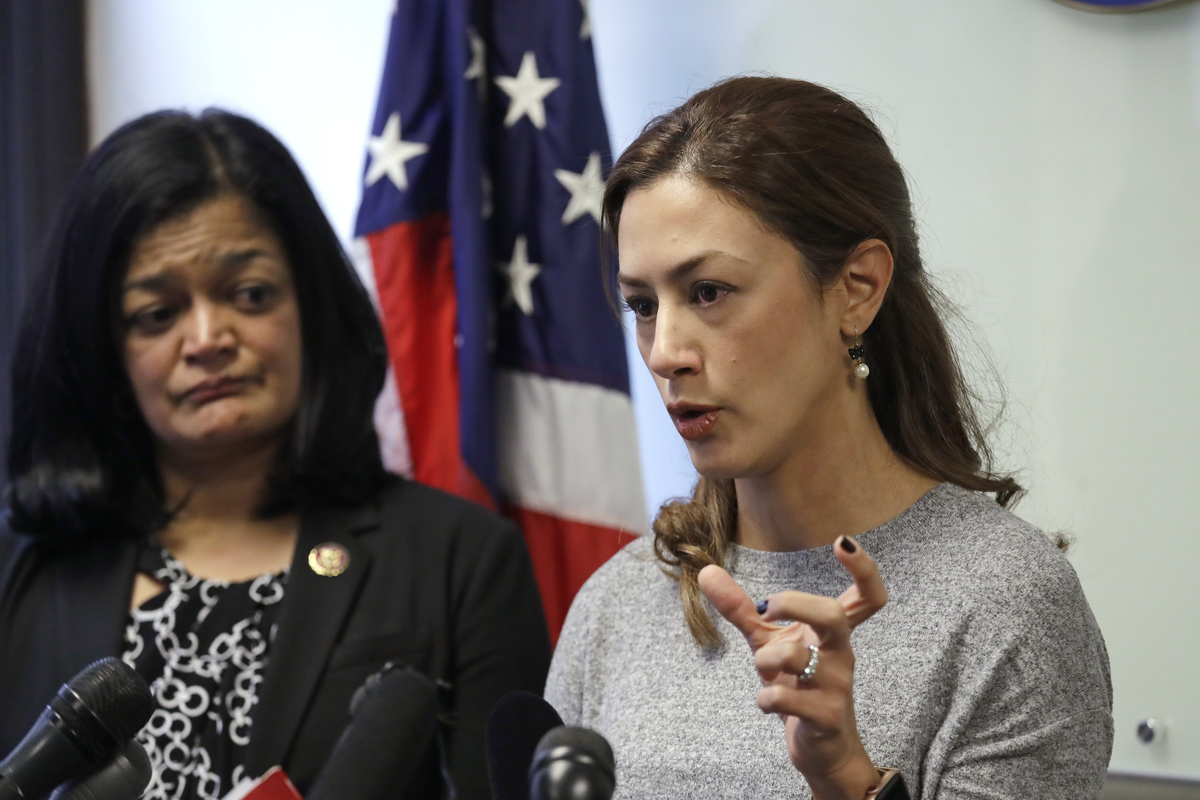 Rep. Pramila Jayapal, D-Wash., looks on as Negah Hekmati talks about her hours-long delay returning to the U.S. from Canada with her family days earlier, at a news conference on Monday.

Iranian Americans say they are scared to travel, and some are dropping international trips after U.S. citizens of Iranian descent were held by U.S. immigration agents at the Canadian border over the weekend.

Immigrant advocates say some Iranian Americans are concerned about being unfairly targeted by Customs and Border Protection amid escalating tensions between Iran and the United States.

"I've heard from people who are saying they're going to cancel their vacations," said Jamal Abdi, president of the National Iranian American Council in Washington, D.C. The organization asked the Department of Homeland Security, which oversees border crossings, to investigate the incident.

"They had planned to travel abroad or, you know, leave the country for spring break. And people are already saying we're going to cancel those trips because we don't know what we're supposed to do."

As many as 200 Iranian Americans were held at the Peace Arch Border Crossing in Blaine, Wash., over the weekend, some for as long as 12 hours, according to legal aid groups.

Immigrant advocates also report that Iranian Americans have been subject to heightened scrutiny, albeit on a smaller scale, at airports and border crossings across the country in recent days.

U.S. Customs and Border Protection says there is enhanced security at ports of entry, but the agency says there is no "directive" from headquarters to detain Iranian Americans because of their country of origin.

Journalist and historian John Ghazvinian, a U.S. citizen who was born in Iran, says he was pulled aside for additional screening after landing at John F. Kennedy International Airport in New York over the weekend.

"Well, just landed at JFK and — no surprise — got taken to the special side room and got asked (among other things) how I feel about the situation with Iran," he wrote on Twitter.

But Ghazvinian, who is the interim director of the Middle East Center at the University of Pennsylvania, says that his interaction with the customs officer in New York was brief and cordial and that she dropped the questioning after he said it seemed "political."

(2) what I actually said to her was “I don’t really see the relevance of that. It feels a little political”. And she dropped it

(4) the Stromboli was from Sbarro

Customs and Border Protection said there were long wait times at the border crossing north of Seattle because of low staffing levels on a holiday weekend, which could have led to longer secondary screenings of travelers flagged by immigration officers. The travelers were eventually released, and the agency disputes the characterization that they were "detained."

Rep. Pramila Jayapal, a Democrat from Seattle, says the agency is playing semantics.

"It was very lengthy screening with no ability to leave. So whether you want to call that detention or something else is up to you. But the core fact of the matter remains," Jayapal said. "This seemed to be a directive to pull aside anybody of Iranian American descent."

"We're here having to decide whether we believe our lying eyes, or we believe what is being said on Twitter by this federal agency," Abdi said.

He points out that Iranian Americans are still living with the Trump administration's travel ban. The ban does not apply to U.S. citizens or green card holders, but it does prevent many of their Iranian parents and relatives from visiting.

"There's all this uncertainty already because of those policies," Abdi said. "And what happened this past weekend kind of retriggered those fears for people who are, we're already not certain about their status coming into the country, coming and leaving."

Iranian Americans who were held at the border crossing in Washington state over the weekend say there's no doubt about why they were detained.

"As soon as they realized that we were born in Iran, they lead us to the office, and they held us there for five hours," said Negah Hekmati, who was detained along with her family and friends late Saturday night as they returned from skiing and visiting family in Canada.

Normally, Hekmati says, her family sails through the border checkpoint between Vancouver and her home near Seattle. They are all U.S. citizens. And they're pre-screened by immigration authorities for a trusted traveler card that allows them to skip long lines at the port of entry.

But this trip was very different.

At a press conference Monday, Hekmati described how immigration authorities took her family's car keys and U.S. passports. She says officers questioned them extensively — about her social media accounts and her husband's time in the Iranian military. Hekmati says her kids were terrified.

"They were very scared that if they go to sleep, they may take us to the jail and they wake up and see we're not there," she said. Her daughter urged her not to speak Farsi, Hekmati said, so that immigration authorities would be less likely to arrest her.

Hekmati says that's why she decided to speak out.

"For me, as an immigrant, I'm used to it, unfortunately. But for my kids, it shouldn't be OK," she said. "I'm still proud of being Iranian as well as U.S. citizens. I'm proud of both. But I need to show my kids to be proud of both as well."