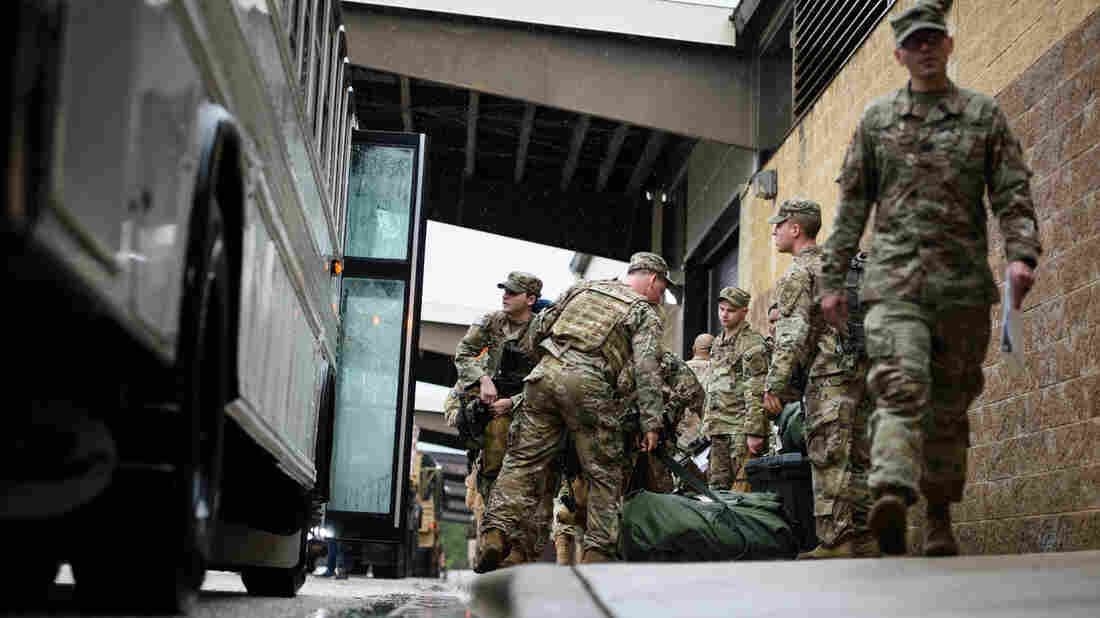 Troops from the Army's 82nd Airborne Division prepare to deploy to the Middle East on Saturday at Fort Bragg, N.C.

The promise follows a Twitter-transmitted dust-up over the weekend in which the House Foreign Affairs Committee advised Trump that constitutional war powers "reside in Congress."

It won't be the first time Congress has tried this.

Forty-seven years ago, lawmakers fed up with an unending, divisive and losing war in Vietnam decided they had had enough of presidents dragging the nation into undeclared wars.

With large Democratic majorities in both the House and Senate, Congress overrode a veto by President Richard Nixon and enacted the 1973 War Powers Resolution.

"We live in an age of undeclared war, which has meant Presidential war," the Senate Foreign Relations Committee wrote at the time in its report on the joint resolution. "Prolonged engagement in undeclared, Presidential war has created a most dangerous imbalance in our Constitutional system of checks and balances."

This Media Post will serve as a reminder that war powers reside in the Congress under the United States Constitution. And that you should read the War Powers Act. And that you’re not a dictator. https://t.co/VTroMegWv0

The last time Congress had fulfilled its exclusive constitutional authority to formally declare war was during World War II. That remains the case today.

The War Powers Resolution was essentially an attempt by Congress to wrest back its warmaking powers that had, in Cold War conflicts from Korea to Vietnam, effectively been ceded to presidents acting in their constitutional capacities as commanders in chief of the armed forces.

The measure's stated purpose is to "insure that the collective judgment of both the Congress and the President will apply to the introduction of the United States Armed Forces into hostilities, or situations where imminent involvement in hostilities is clearly indicated by the circumstances, and to the continued use of such forces in hostilities or in such situations."

Under this law, there are only three circumstances under which the president can order military forces into ongoing or imminent hostilities. When:
1. Congress has declared war;
2. Congress has provided "specific statutory authorization" to do so;
3. there is a national emergency "created by attack upon the United States, its territories or possessions, or its armed forces."

The president is also required "in every possible instance" to consult with Congress before engaging the armed forces in hostilities or situations in which hostilities are imminent.

Once military action has been taken, the War Powers Resolution calls for the president to submit in writing "within 48 hours" a report to the House Speaker and the Senate's president pro tempore.

That presidential report must describe the circumstances necessitating military action, the constitutional and legislative authority for ordering that action, and that engagement's estimated scope and duration.

Once such a report has been (or should have been) sent to congressional leaders, the president is given up to 60 days to terminate a military engagement. That deadline goes away if Congress has either declared war or specifically authorized the action, passed a law extending the 60-day period, or if the president is "physically unable" to meet the deadline due to an armed attack on the U.S.

The resolution also allows an additional 30 days if the president certifies in writing that such time is needed for safely removing U.S. forces from hostilities.

It notes that Congress can at any time approve a concurrent resolution, which does not require a presidential signature, directing the president to remove American forces from hostilities beyond U.S. borders, as long as war has been neither declared nor authorized.

In his veto message, Nixon contends it is unconstitutional for Congress to approve a concurrent resolution not subject to presidential approval and passed by simple majorities in both chambers to end a military engagement.

He also rejects the measure's 60-day deadline for removing troops if Congress has not acted. "It would give every future Congress the ability to handcuff every future President," Nixon writes, "merely by doing nothing and sitting still."

The U.S. Supreme Court in 1983 vindicates Nixon. In a ruling on a different matter, the court renders unconstitutional the War Power Resolution's provision that lets Congress approve concurrent resolutions ending military engagements which a president has no opportunity to veto.

That means any attempt by Congress to end a military engagement against a president's wishes now requires two-thirds majorities in both chambers to overcome a presidential veto.

No Congress has been able to muster such a super-majority to halt military actions ordered by a president.

Late in 2018, Trump issues the second veto of his presidency to block legislation passed under the War Powers Resolution that would have halted U.S. military assistance to Saudi Arabia in the war that kingdom was waging in Yemen.

Before ordering the airstrike that killed Soleimani, Trump fails to follow the War Powers Resolution provision requiring prior consultation with Congress for such an action.

Irate congressional Democrats are responding with yet another attempt to curb Trump's military moves.

The War Powers Resolution announced by Pelosi mirrors a similar measure introduced this week in the Senate by Virginia Democrat Tim Kaine. It requires the removal of U.S. forces from hostilities with Iran within 30 days of the joint resolution's enactment, absent a formal declaration of war by Congress or specific authorization for the use of military force.

There is little indication such a measure, even if it were to pass in both chambers, could survive another virtually certain veto by Trump.