Accessibility links
A Tale Of Revenge, Magic And Nuance, All 'Woven In Moonlight' Isabel Ibañez's debut novel blends fiber art magic and Bolivian-inspired fantasy, for a story that seems at first to be about revenge — but blossoms into something more complex and surprising. 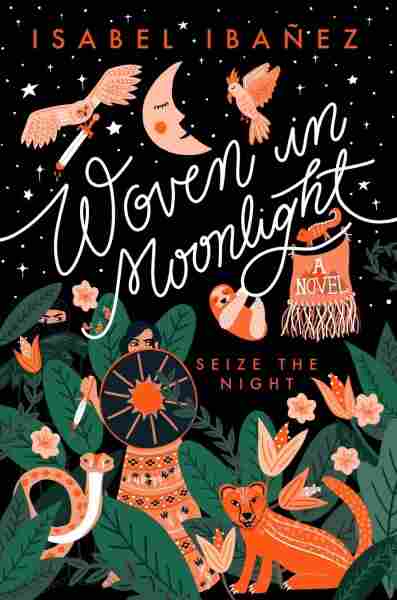 Ximena has spent most of her life as a decoy for the Condesa, the rightful but deposed queen of Inkasisa. They live in exile with their fellow Illustrians, forced to flee when a usurper king used the magic of a dark relic to drive them out of their homes and make way for his own people, the Llascans. After years of pretending to be the Condesa and taking the brunt of her people's frustration and anger, Ximena hardly knows who she really is anymore. Her one solace is her magic — her ability to weave moonlight into beautiful tapestries.

When the usurper king sends an order that the Condesa must marry him or else face the final destruction of her people, Ximena has no choice but to return to the home she fled and offer herself to the king in the Condesa's place, never letting on that the real Condesa is still safely hidden away. But getting close to the king has its benefits. It brings Ximena closer to the relic that allowed the king to defeat the Illustrians. If she can find it, perhaps she can use it to crush him and return the real Condesa to her rightful place.

But the longer Ximena spends among the Llascans, the more she begins to question the central truth upon which everything she believes is based: Illustrians are good and deserve to return to their place of power in Inkasisa and Llascans are bad and deserve to be crushed for their insolence. Is it as simple as right and wrong? What if the Llascans had very understandable reasons for rebelling? That would change everything.

Woven in Moonlight — appropriately — weaves a beautiful spell that takes culturally specific details and spins them into an engaging fantasy world. There is nothing generic about the land of Inkasisa. Everything from its clothing and fashions to its smells and foods to its plants and animals feels knowingly rendered. Especially the food. This is one of those fantasy novels that will make the reader hungry (I literally had to go buy a snack while I was reading it), but instead of that generic fantasy fare, stew and bread, Woven in Moonlight feasts upon Pasankalla, Marraqueta, and Salteñas. My favourite touch may be the glossary of food terms at the end of the book, where each dish is lovingly described.

In general, the domestic holds power in this world. Two of the most powerful characters in the story use weaving as a means to practice magic, and little details like the colors of dyed wool end up having major consequences. Ximena knows how to fight and does it bravely, but her true strength lies in a gentler art and the way she uses it to close the gap between two cultures. And she's not the only one — many characters in the story turn out to be more nuanced than they first seem, from princesses to masked bandits.

What beings as a clear-cut tale of a girl seeking revenge and restoration for a generation of wrongs soon blossoms into something much more quicksilver and subtle.

Speaking of masked bandits, we get a very charming addition to the pantheon in El Lobo, a rebel intent on harassing the Llascan court at every opportunity. While the eventual reveal of his true identity won't come as a shock, the bravado of his persona is charming enough to make up for the lack of credible subterfuge. The Llascan princess is also an intriguing character who connects with Ximena over their shared love of weaving. While she's pivotal to the story, she doesn't get a lot of scenes, and I wish that the book offered us a little more of her, especially given the role that she plays as Ximena's worldview begins to shift.

Nuance is something that Woven in Moonlight seems to care about very deeply. What beings as a clear-cut tale of a girl seeking revenge and restoration for a generation of wrongs soon blossoms into something much more quicksilver and subtle. Little moments make the reader stop and wonder if the narrative we've been given is reliable, even as Ximena begins to ask the same question. Bolivia, which is the inspiration for Inkasisa, has a complex history of conquest, colonization, oppression, rebellion, and corruption. That history, like all the charming cultural details, is fully and honestly represented in the tapestry that is Woven in Moonlight.